Heterogeneous integration of III-V semiconductors on silicon via wafer bonding is a very promising means of fabricating wavelength-tunable laser sources on silicon.

The area of silicon photonics is attracting significant attention due to the prospect of low-cost, compact circuits that integrate photonic and microelectronic elements on a single chip.1 Such chips have uses in a wide range of applications that range from short-distance data communication to long-haul optical transmission. One of the key elements of silicon photonics is the laser source. Today, the most promising short- and medium-term solutions involve the heterogeneous integration of III-V semiconductors (alloys made from elements in old groups III and V) onto silicon via wafer bonding techniques.2–6

In the wafer bonding approach, unstructured indium phosphide (InP) dies or wafers are bonded, with their epitaxial layers (the crystalline overlayer on a crystalline substrate) facing down, onto a silicon-on-insulator (SOI) waveguide circuit wafer. The InP substrate is then removed, and the III-V epitaxial film is processed to form an optical amplifier section. Such an approach exploits the highly efficient light-emission properties of particular direct-bandgap III-V semiconductor materials, such as compounds based on aluminum indium gallium arsenide phosphide—(Al)InGaAsP—alloys.

The fabrication of silicon-photonic integrated circuits using the wafer bonding approach makes use of a 200mm CMOS line, starting with 200mm SOI wafers that have a silicon top-layer thickness typically of 440nm. The process flow begins with etching the top silicon layer to form passive-rib waveguides (see Figure 1). These waveguides are optimized for coupling with III-V waveguides that are later aligned on top of the silicon waveguides. After this etching step, the remaining silicon layer has a thickness of 220nm. For the passive circuitry, additional etching steps are applied to form strip waveguides and other elements such as Bragg reflectors or vertical output couplers. A silica layer is deposited, and a chemical-mechanical polish is applied in order to planarize the surface of the SOI wafer.7 In the meantime, 2-inch InP wafers containing multiple quantum-well layers are grown and bonded onto the SOI wafers.8 After wafer bonding and InP substrate removal, a combination of wet and dry etching is used to etch through the InGaAs contact layer and the InP p-doped-waveguide cladding layer. The active waveguide is then encapsulated with divinylsiloxane bis(benzocyclobutene). A titanium/platinum/gold alloy is used for metallization of both p- and n-type contacts. Finally, the fabricated lasers are ready for wafer-level probe testing, with the vertical couplers acting as access points for the optical probe. 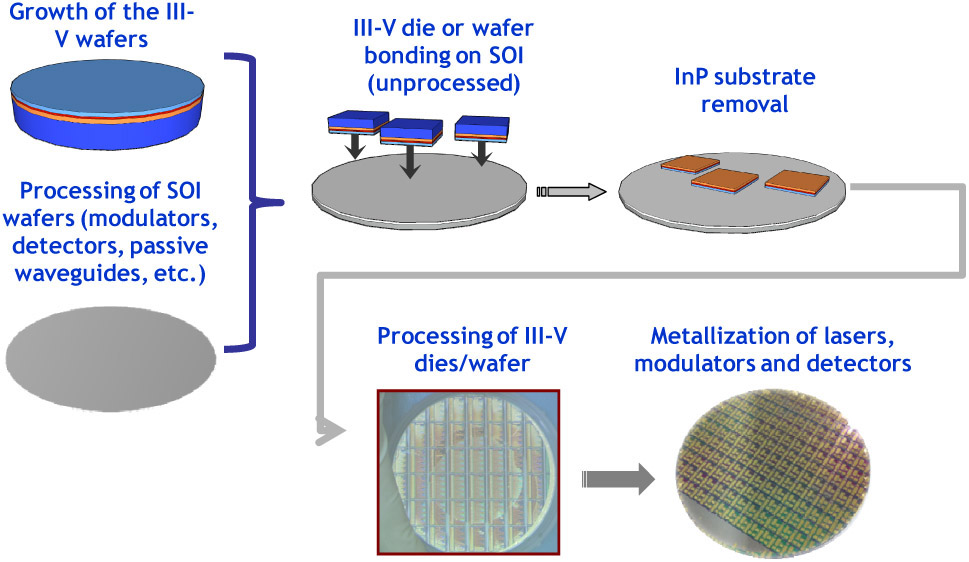 Applications such as wavelength-division multiplexing require wavelength-tunable lasers. We therefore used the wafer bonding approach to develop a new monolithic, widely tunable laser based on hybrid integration. Such a laser exploits the strongest feature offered by each of the two materials: III-V for light amplification, and silicon for efficient spectrum filtering and tuning. Our tunable laser consists of an InP-based amplification section, tapers for modal transfer between III-V and silicon waveguides, two ring resonators (RRs) for single-mode selection, metal heaters on top of the rings for thermal wavelength tuning, and Bragg gratings that provide reflection and output fiber coupling (see the left-hand side of Figure 2 for a schematic). In the silicon sections, ring resonators one (R1) and two (R2) have slightly different free spectral ranges, such that the Vernier effect is used to achieve wide-range wavelength tuning. Moreover, the bandwidth of the double-ring filter is designed to select only one Fabry-Pérot mode of the cavity. The Bragg reflectors are made by partially etching the silicon waveguide. In addition to the fabrication steps detailed above, a nickel chromium metal layer is deposited on top of the RRs, which allows tuning of the resonance wavelength via a thermo-optic effect when the silicon waveguides are heated.

For a tunable laser module setup (see Figure 2), we found that a wavelength tuning range of 35nm is achieved with a side mode suppression ratio (SMSR) higher than 50dB and an optical output power level in excess of 3mW across the wavelength range (see Figure 3). The measured laser linewidth falls in the range of 500kHz to 5MHz over the entire wavelength band. We demonstrated that such a laser can be used as a local oscillator in a coherent receiver for polarization-division multiplexing quadrature phase-shift keying of a signal at 100Gbit/s.9 No penalty was observed when compared to a commercially available external-cavity tunable laser. We also demonstrated that such a hybrid III-V/silicon laser can be directly modulated at 10Gb/s,9 which is an interesting feature for access networks (where the reach is typically less than 40km) and metropolitan networks (where the reach can extend up to 180km).

Figure 3. Plots of wavelength tuning with its corresponding SMSR (left), and wavelength tuning and output power level coupled to a polarization-maintaining fiber (right), all as a function of the voltage applied to the heater. SMSR: Side mode suppression ratio.

Overall, we demonstrated that heterogeneous integration of III-V on silicon is a very promising way to fabricate laser sources on silicon. The performance of our III-V-on-silicon lasers approached that of a monolithically integrated InGaAsP laser on an InP substrate. Moreover, the silicon waveguides provide additional functionalities such as spectral filtering and wavelength tuning in lasers with integrated ring resonators. Our next step will be the integration of hybrid lasers on silicon within more complete photonic circuits, such as transmitters and receivers.