Materials based on liquid crystals have had a profound impact in modern technology. Smectic liquid crystals—layered phases in which molecules maintain a loose parallel order and self-organize into stacked layers—have recently drawn much attention because of their defect structures, known as focal conic domains (FCDs). FCDs can form ordered arrangements over large areas, but a method is required to control the shape of these structures.

Liquid crystals can be readily reconfigured and are a relatively untapped resource in the manufacturing of responsive devices. Only recently have these materials been used in the fabrication of items such as smart windows, optical structures, and sensors. Once the formation of FCD textures can be controlled, liquid crystals will be used for many technologies, e.g., superhydrophobic surfaces,1 optically selective photomasks,2 microlens arrays,3 and soft lithography templates.4

We have created a new method to create structures with a high degree of symmetry, which is based on the spontaneous arrangement of FCDs in smectic liquid crystals. We designed our system to create flower-like patterns of FCDs at a curved smectic interface.5 With this method we can template the arrangement of defects in a specific way and develop advanced materials in a self-assembly process. Our system will permit sophisticated self-assembled patterns in smectic liquid crystals that can be used in guiding functional materials.

We used a simple experimental system to demonstrate the organization of FCDs (see Figure 1). In this setup, we confined colloids (silica beads) to the interface of a liquid crystal film that was in contact with air. The hybrid texture of this smectic was planar at its anchored base and perpendicular where it was in contact with the air. To satisfy the wetting properties of the silica bead surfaces, the air/smectic interface deformed (see Figure 2).6 The resultant curvature of the interface created a flower-shaped texture, in which the FCDs were organized radially around the colloid—as shown in Figure 1(c) and (d).5 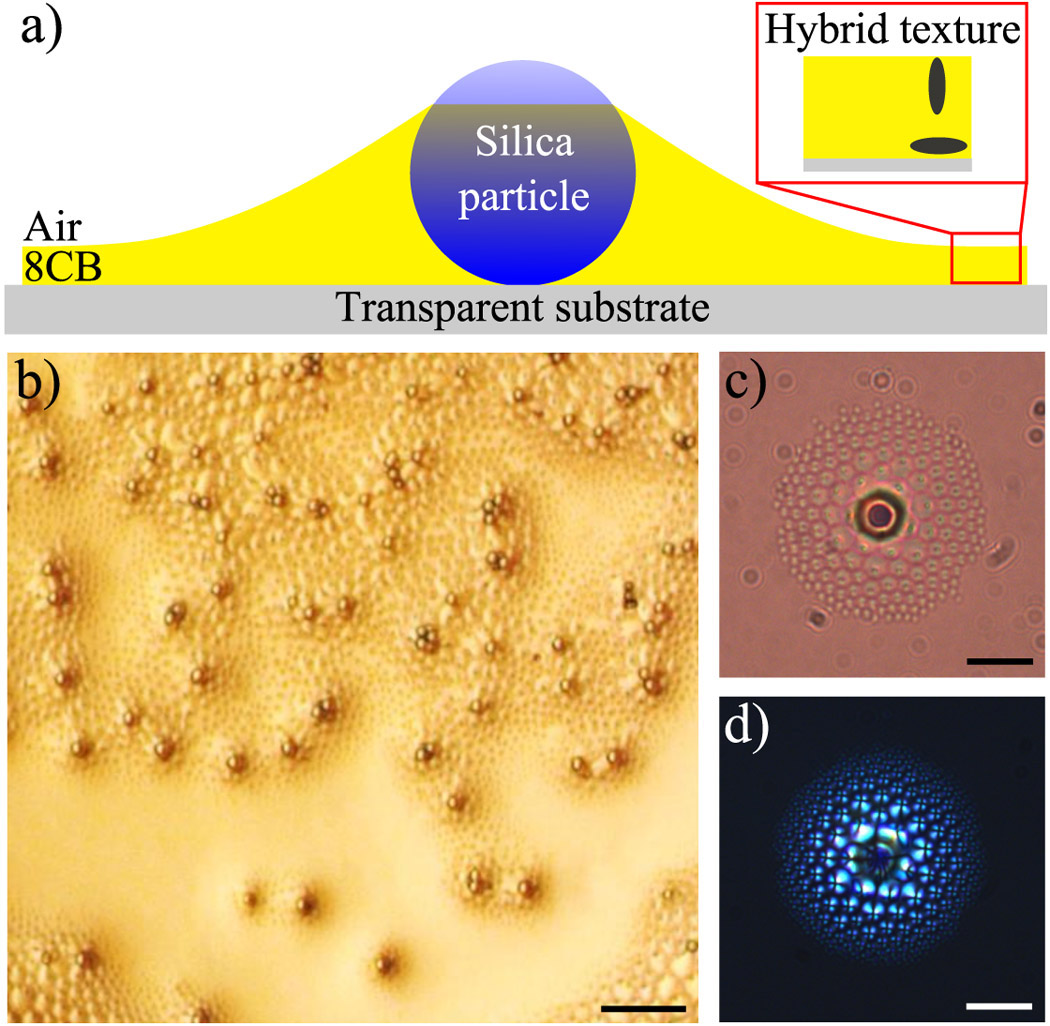 Figure 1. Experimental system for organization of focal conic domains (FCDs) in liquid crystals. (a) Silica particles are trapped at the interface of a thin (about 1.5μm) smectic film (8CB), with a hybrid texture and in contact with air. (b) Optical image showing many particles trapped at the air/smectic interface, which are surrounded by FCDs (scale bar is 20μm). A smectic flower texture organized around a single colloid (silica bead) shown in (c) bright field and (d) between crossed polarizers (scale bars are 10μm). 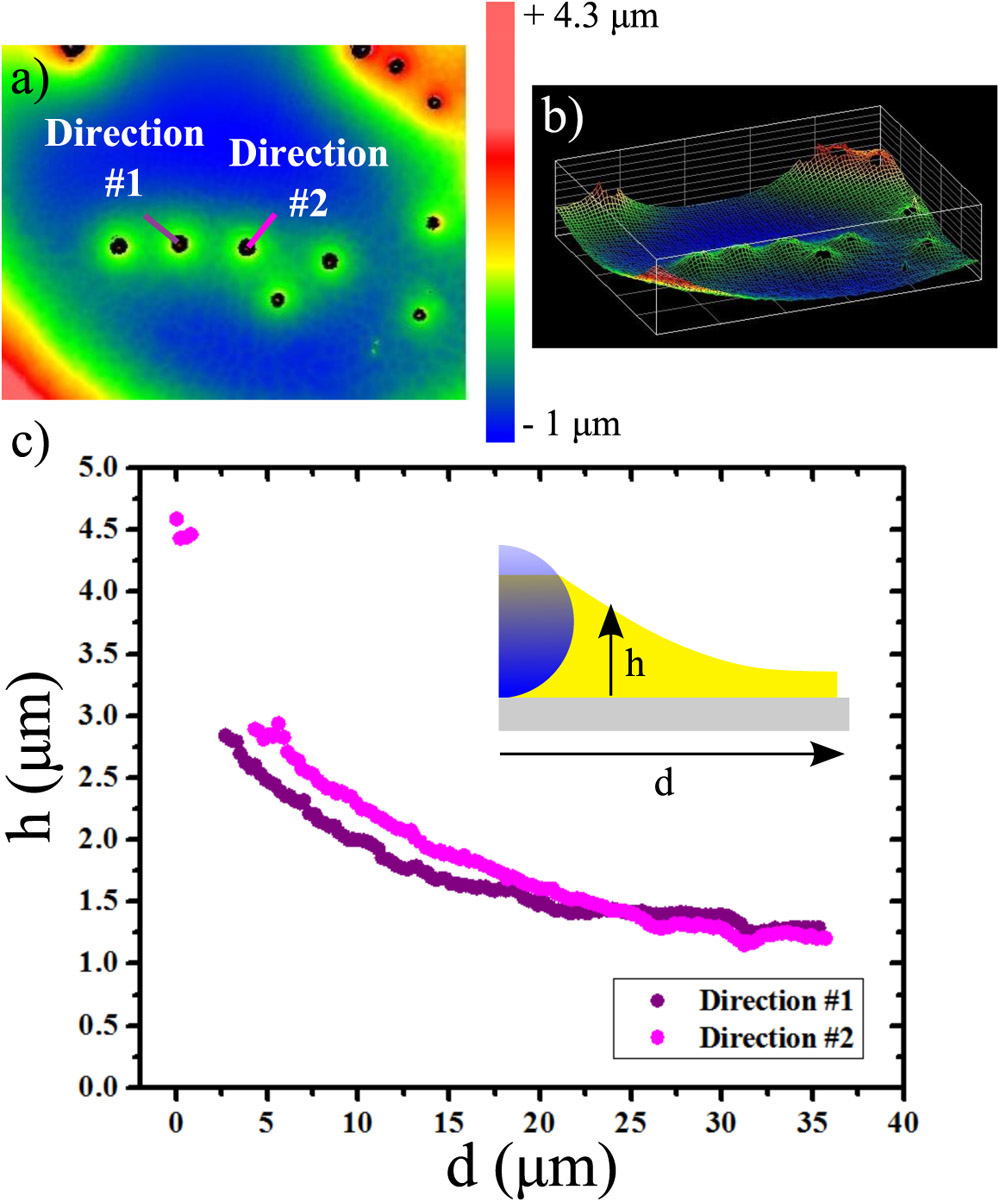 Figure 2. (a) Topographic profile of many particles trapped at an air/smectic interface measured using an interferometric technique. (b) The 3D depiction of the profile shows the deformation of the interface around the beads. (c) The profile, h, of the air/smectic interface near two isolated particles in two different directions shows the smectic film thickness as a function of distance, d, from the colloid center.

The complex refractive index of the smectic depends on the molecular orientations of the liquid crystal. The light that passes through each FCD is therefore focused toward its center.3, 7 In our system, many assembled FCDs act as individual lenses, which together resemble an insect's compound eye. The liquid crystal and silica beads that we use are transparent to light, and the resulting structures can be easily built in one step. Our approach can therefore be used in the development of a new generation of microlenses.8

The flower patterns that we create are very sensitive to the shape of the particles we use, which suggests a way to control the optical properties of the FCD assemblages. We see evidence of this dependence in the clusters of particles that form after sample preparation, which act as seeds (without the need for external forces) for the FCD flower textures (see Figure 3). The particles are initially isolated, but interact with each other and spontaneously form dimers. This effect is a result of the interplay between elastic and capillary forces. The beads distort the air/smectic interface and cause capillary attractions to arise between nearby particles, which lowers the surface area of the interface. The particles also distort the smectic layers, with a concomitant elastic compensation. The elastic and capillary forces compete to drive the formation of the aggregates and so the resulting textures can be controlled by anchoring or by changing the size of the particles. 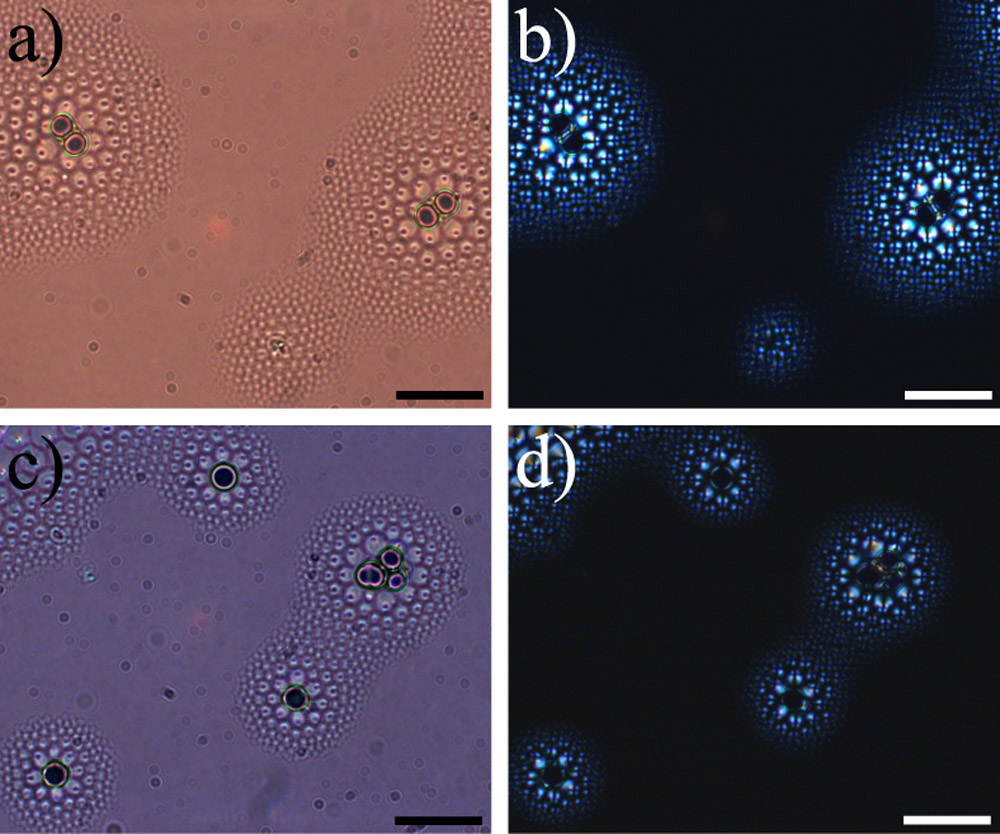 Figure 3. Flower textures organized around colloidal clusters of various shapes, shown in bright field (a and c) and between crossed polarizers (b and d). The form of the flowers is sensitive to the shape of the aggregates. Scale bars are 20μm.

We have demonstrated a new approach that can be used to control the pattern of smectic defects. The resulting liquid crystal flower structures can be used to capture and focus light. Our system can be tuned easily by changing the amount of liquid crystal, the surface tension at the smectic interface, or the seed particle characteristics. Our methodology has several possible applications in the development, for instance, of solar panels and small surgical cameras. We are now exploring the fabrication of lenses in device settings. Once this part of the approach is perfected our technology will allow the growth of lenses on curved surfaces, and of liquid crystal scaffolds to build new materials, smart surfaces, microlens arrays, and advanced sensors.

This work was supported in part by the National Science Foundation (NSF) through the University of Pennsylvania Materials Research Science and Engineering Center grant number DMR11-20901. Daniel A. Beller was supported by NSF grant number DGE-1321851 and Randall D. Kamien was partially supported by a Simons Investigator grant from the Simons Foundation. They both acknowledge the hospitality of colleagues at the Isaac Newton Institute while this work was completed.