Laser communication from the Moon at 622Mb/s

NASA's Lunar Laser Communication Demonstration (LLCD) recently used a pulsed laser beam to transmit data from the Moon to Earth at a record-breaking download rate of 622Mb/s (see Figure 1).1 This download rate is more than six times faster than the best radio system ever flown to the Moon. Yet it uses a laser-based space terminal that is half the weight and uses 25% less power than the radio system. Such increases in data downlink rates can allow for not only more science return for NASA missions but perhaps even remote telepresence to advanced probes and rovers using 3D high-definition vision and control. Similarly, the reductions in mass and power for communication can allow for more fuel for longer missions or even additional instruments on NASA's probes. 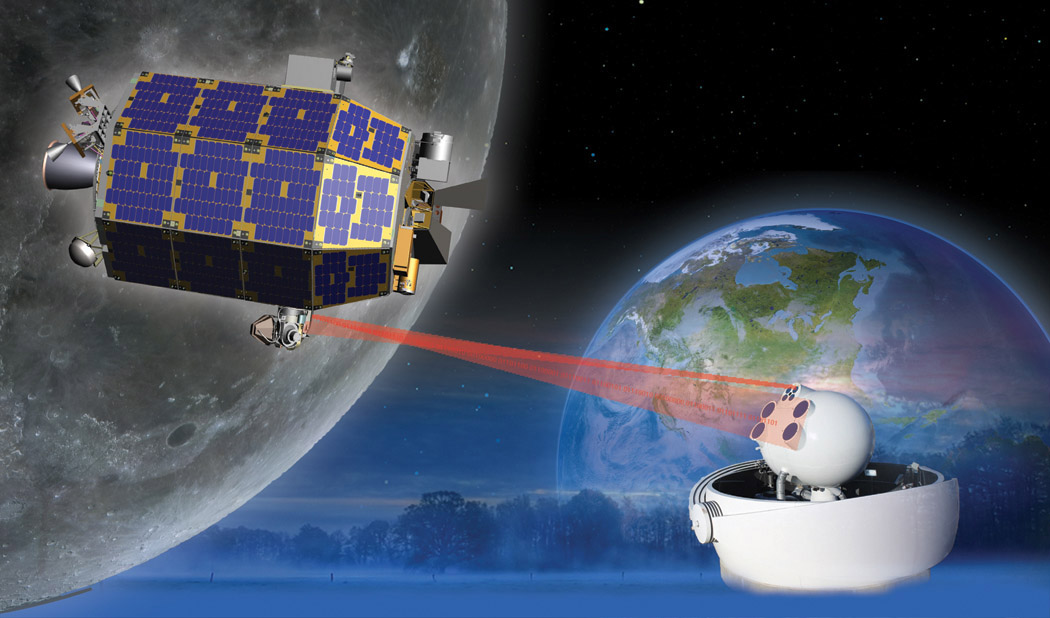 The LLCD mission hitched a ride on LADEE, which reached lunar orbit on 6 October 2013 after its successful launch from Wallops Island, Virginia, on 6 September 2013. The LLCD team had 30 days for flight operations, after which the spacecraft began its primary science mission, which is to investigate the very thin atmosphere that exists around the Moon.

During its month of operations, LLCD demonstrated error-free communication from the Moon under all conditions, including during broad daylight and even when the Moon was within 3° of the Sun as seen from Earth. LLCD also operated error-free when the Moon was less than 5° above the horizon (as seen from the ground station), which showed that wind and atmospheric turbulence did not significantly impact the system.2 LLCD was even able to communicate through thin cirrus clouds. Operationally, LLCD downloaded the LADEE spacecraft's entire stored spacecraft data in less than five minutes. This normally would have taken several days using LADEE's onboard radio frequency system. The team was able to showcase the fidelity of the link by transmitting LADEE mission data as well as high-definition video, such as a video message from NASA administrator Charles Bolden that completed the trip to the Moon and back with only seconds in processing delay (see video3).

The space laser terminal transmits a 0.5W IR laser at 1.55 microns (which is eye-safe as well as invisible to the eye) through its 4in (10.7cm) telescope toward the selected ground terminal. The space terminal simultaneously receives the uplink signal transmitted from a 40W laser through telescopes at the primary ground terminal in New Mexico. Both the ground terminal and the space laser were designed, built, and operated by the Massachusetts Institute of Technology's Lincoln Laboratory. The downlink beam is received by an array of telescopes that are coupled to novel and highly sensitive superconducting nanowire detector arrays that convert the photons in the beam to bits of data. Information is carried in both uplink and downlink laser beams using high-rate pulse-position modulation along with powerful error-correcting codes. LLCD also demonstrated its added capability of providing continuous measurements of the distance from Earth to the fast-moving LADEE spacecraft with an unprecedented precision of 1cm.

The complete LLCD system also includes two additional ground terminals to provide more opportunities for communication when cloudy weather interferes with signal transmission. JPL has configured its Optical Communications Telescope Laboratory to communicate with the LLCD space terminal and successfully demonstrated downlink communication at 80Mb/s many times. The European Space Agency has also configured its optical ground station to be compatible with the space terminal and communicated with LLCD at 40Mb/s.

LLCD would like to acknowledge the support of John Rush and Badri Younes of NASA's Space Communications and Navigation Program Office at NASA Headquarters and the entire LADEE project of NASA's Ames Research Center.

Don Cornwell is the mission manager for LLCD.