An optical system design for the Atacama Large Millimeter Array

The Atacama Large Millimeter Array (ALMA) is the largest millimeter and submillimeter radio-telescope facility in the world. It consists of 66 classical Cassegrain antennas with diameters of 7 and 12m forming two subarrays, providing unprecedented sensitivity and resolution. Each antenna contains 10 dual-polarization heterodyne receivers. These receivers, which cover the frequency range from 35 to 950GHz, take the original signal and down-convert it to a lower frequency for easier digital post-processing. To optimize the information obtained using Band 1, its original frequency range (30–45GHz) has been altered to cover 35–50GHz, with the goal of reaching 52GHz. This will allow, for example, the study of the evolution of grains in protoplanetary disks and the detection of CO(3–2) line emissions from galaxies, including the Milky Way, during the epoch of re-ionization.1

The Band 1 system combines a series of stringent technical specifications, construction restrictions, and cost constraints that all necessitate trade-offs. The optical system is required to meet a total aperture efficiency (the ratio of the effective collecting area of the antenna to its physical area) exceeding 80% considering spillover, amplitude, phase, and cross-polarization efficiencies. In addition, the angular alignment of the optical beam must be within 5 millirads of the nominal direction (the imaginary line from the center of the antenna's subreflector to the center of the lens), and the additional noise due to optics must not exceed 10K. Because the optical system must remain the same for the entire frequency band (35–50GHz), no mechanical tuning is allowed and warm optics (those held at room temperature) in the device cannot interfere with the already-existing common optics, which are used by both the other bands and the amplitude calibration device. Moreover, the 7 and 12m antennas, which require different beam tilt angles, use the same front-end. Using the center of the Band 1 window and the apex of the subreflector, the beam axis is tilted at 2.48 and 4.28° for the 12 and 7m antennas, respectively.

We have explored several configurations for the focusing elements and horn antenna (‘feed horn’) with the aim of meeting these requirements. The optical systems studied include those composed of one warm lens with a separate vacuum window, a single warm lens (acting also as window), two warm mirrors plus a window, and two lenses (with one cooled). We also studied different shapes and materials for these lenses.

Due to the short distances required between elements, cooled optics suffer inherent limitations. In addition, when only a cold lens is used to couple the beam with the antenna's subreflector, the generated beam is truncated, resulting in unacceptable losses or an extremely low aperture efficiency. We were able to achieve the best results using a cold horn and a warm dielectric lens. The proposed system consists of the following elements: a biconvex one-zone Fresnel lens; IR filters in the form of a thin Gore-Tex membrane and a grooved plate of polytetrafluoroethylene (PTFE) for the 15 and 110K stages, respectively; and a compact spline-profile corrugated horn that can be machined from a single block. This baseline configuration is shown in Figure 1. 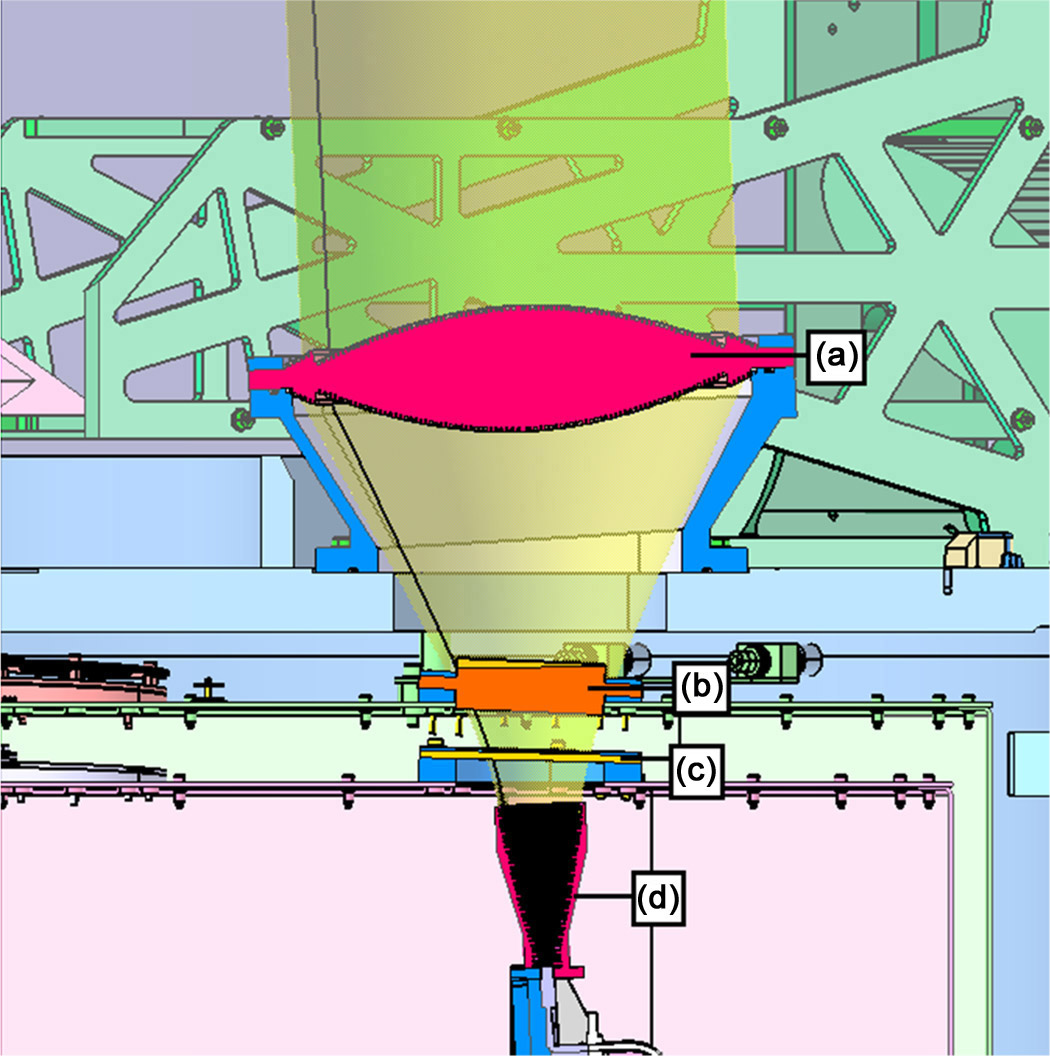 The feed horn, which uses a spline design optimized to match the required beam parameters, can be directly machined as a single piece of duralumin on a computer numerical controlled lathe. We designed this instrument using a quasioptical model, optimized using commercial software based on the mode-matching technique. The resultant horn has an aperture diameter of 31.62mm and a total length of 70mm, making it more compact than a standard corrugated horn.2 The noise arising due to cross-polarization is below −34dB, sidelobes (local maxima of the far-field radiation pattern) are under −20dB, the reflected power is lower than −28dB, and high-order mode content is below −45dB. We designed the warm lens by analyzing the quasioptical propagation. This analysis led to the fabrication of a biconvex one-zone Fresnel lens on a low-loss material—high-density polyurethane (HDPE)—which minimizes added noise.3 The noise contribution of the optics is decreased by almost 3K compared with a standard lens solution. The lens diameter is set to 190mm, which represents 3.5 times the beam radius at lower frequency and a thickness of 50.44mm at its center. Corrugations on the surface of the lenses reduce the reflection loss to −20dB.

The fully integrated system was validated using an electromagnetic solver (a program designed to solve Maxwell's equations) based on the finite element method. Figure 2 shows an example of the simulated far field of the complete model at the center frequency (42.5GHz). The calculated aperture efficiency for the lens and horn system ranges between 77.5 and 81%, and the estimated noise contribution of the optical system is between 7.5 and 9K. To enable compatibility with the 7m antennas, we propose tilting the beam by offsetting the lens with respect to the optical axis. Simulations show that this solution is feasible, with the drawback of a 0.5% loss in aperture efficiency and the advantage of no additional noise contribution. 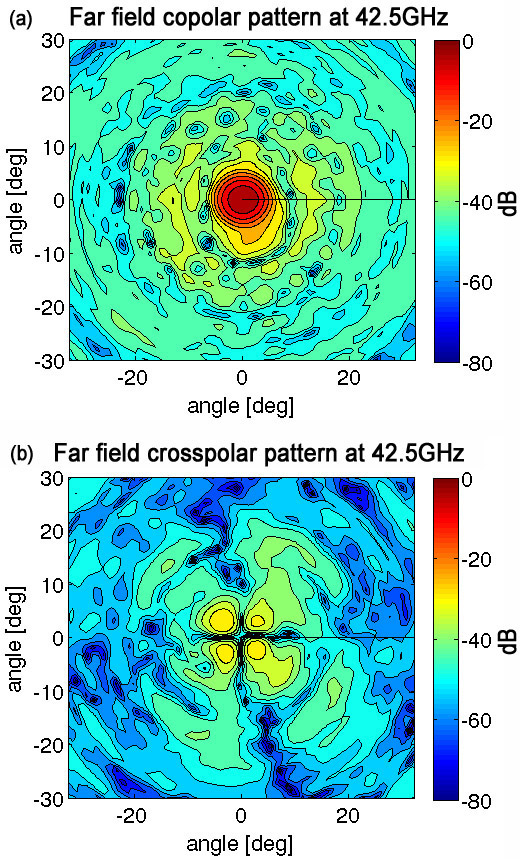 Figure 2. Simulated far-field (a) co-polar and (b) cross-polar patterns of the entire Band 1 baseline optics at 42.5GHz.

The horn antenna has been fabricated—see Figure 3—and characterized at 35, 42.5, and 50GHz with a vertical planar near-field beam pattern setup.4, 5 The far-field data is obtained in post-processing using a fast Fourier transform algorithm. The resulting radiation patterns—see Figure 4—are consistent with the simulation results. The lens is currently under construction and the complete optical system will be measured once it is ready. 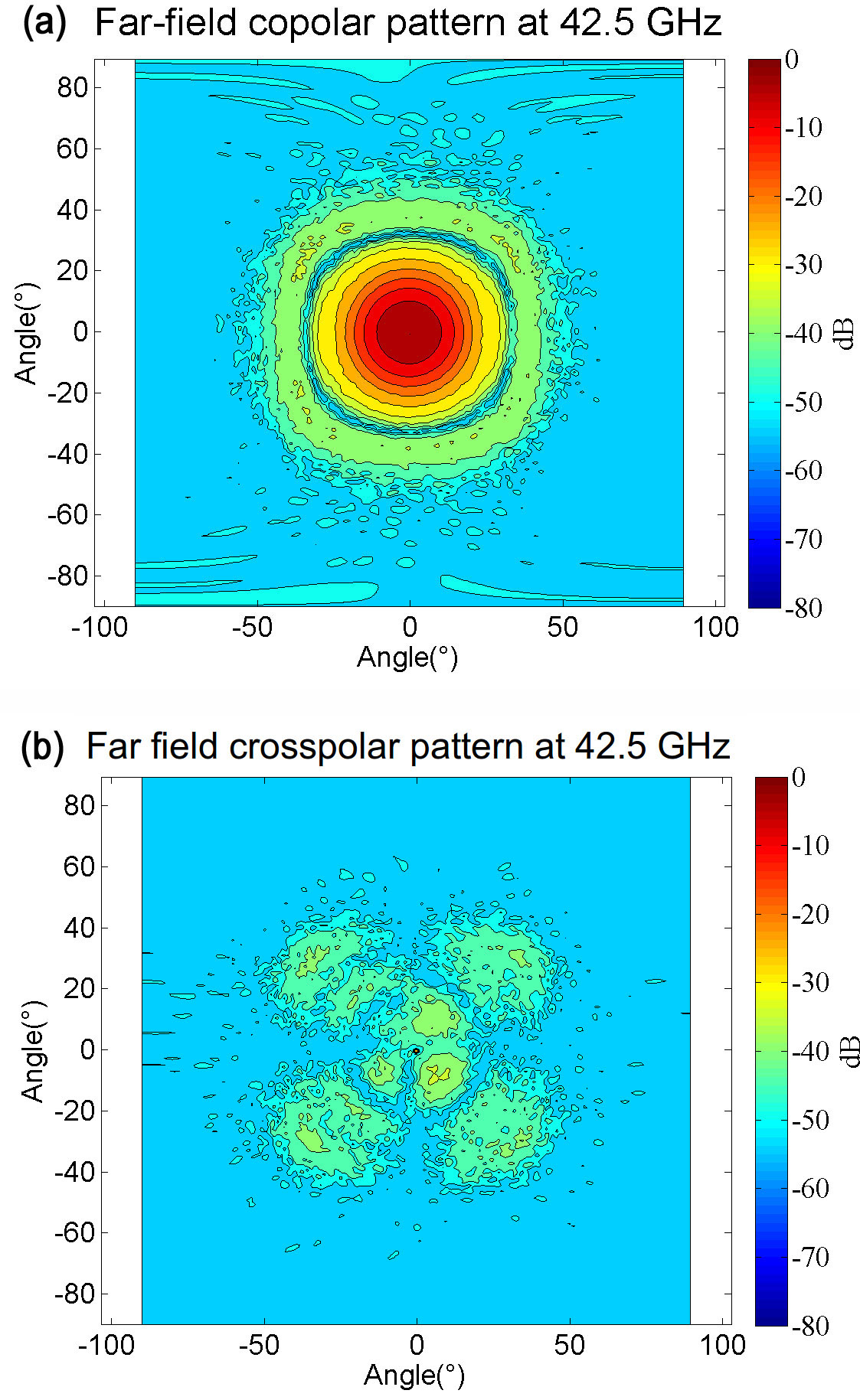 In summary, we have presented a complete and functional baseline design for the optical system of ALMA Band 1, for both 7 and 12m antennas. These optical systems consist of a compact corrugated spline-profile cold horn and a biconvex one-zone Fresnel warm corrugated lens, fabricated from HDPE. Our simulations indicate that the complete system has a noise contribution of between 7.5 and 9K and an aperture efficiency of between 77.5 and 81% for the lens and horn combination, with a small roll-off at lower frequencies. The system is currently in the characterization stage. In the second phase, we will focus on improving the design to achieve greater efficiency at low frequencies.