The current world population of 7.2 billion is predicted to increase to 9.6 billion in 2050,1 and world energy consumption is projected to grow by 56% between 2010 and 2040 to 820 quadrillion British thermal units (Btu).2 Although fossil fuels constitute almost 80% of energy use,2 they are depleting, and it is becoming more urgent to ensure that energy supply is sustainable. Renewable energies already belong to the world's fastest-growing energy sources and for electricity generation are increasing by 2.8% per year.2 The most important renewable energy sources are hydro, wind, and photovoltaic (PV).3

Silicon wafer-based modules dominate the PV market with an 86% market share. The other 14% belongs to thin-film PV,4 some of which is based on hydrogenated amorphous silicon (a-Si:H) and hydrogenated microcrystalline silicon (μc-Si:H), which share the advantage of silicon's abundance as a raw material. An additional advantage is that less silicon is required than for conventional wafer silicon solar cells. Thus, silicon-based thin-film technology has the potential for low-cost, rapid, large-area industrial production and low energy-payback time.5

Current solar cell efficiencies are 10.1% for single-junction a-Si:H in the p-i-n configuration (meaning a combination of positively doped, intrinsic, and negatively doped silicon),6 10.8% for single-junction μc-Si:H p-i-n,7 and 12.3% for tandem a-Si:H/μc-Si:H (micromorph).8 Light trapping has proven a useful tool for increasing efficiency. The concept of light trapping, also termed light in-coupling, is illustrated in Figure 1(a). Incorporating a textured surface increases the effective light path and hence absorption in the silicon absorber material.9 Consequently, even thinner absorber layers can be used, an advantage for amorphous silicon, which suffers from a light-induced degradation effect. This so-called Staebler-Wronski effect degrades efficiency, and is less profound in thinner absorber materials.10

Silicon has a low absorption coefficient in the near-IR region, which makes light in-coupling especially relevant. Efficiency is enhanced by a surface capable of scattering several wavelengths (broadband) simultaneously,11 and this can be achieved by incorporating a textured surface with features of different sizes. The most commonly applied method, of randomly texturing transparent conductive oxides (TCOs), is illustrated in Figure 1(a). For this approach, the TCO has to be sufficiently thick for adequate conductivity and degree of texturing, but this limits the kind of front contact that can be used. An appropriately and effectively textured glass surface might make a wider range of TCOs suitable for thin-film solar cells—see Figure 1(b)—including those that are untexturable, for instance, because they are too thin, and alternative front contacts, such as carbon nanotubes.

One method of texturing the glass surface is to use acids, such as hydrofluoric acid, for wet chemical etching,11 but the acids concerned are highly corrosive. We investigated the potential of laser texturing the glass surface as an alternative. We directly ablate the glass surface with a laser, which is also used to connect the solar cells in series in the module. We studied the effect the structural changes, in particular the modified refractive index,12 and the roughness of the ablated surface have on light trapping in silicon thin-film solar cells. The parameters of the picosecond laser include the pulse duration (τ=8.5ps) and wavelength (λ=1064nm). We carried out 2D finite-difference time-domain simulations with Sentaurus TCAD software (Synopsys, CA)13 to demonstrate the effect of the crater profile and modified refractive index on the optical generation rate of the absorber material.

The substrates are two boro-aluminosilicate glasses with earth alkali (EAGLE XG®)14 and alkali (BOROFLOAT® 33)15 additives, respectively. The third is a soda lime glass (SGG DIAMANT®).16, 17 Different additives in the glass change their band structure and thus their optical properties. The substrates were scribed with a 1064nm-wavelength, Gaussian-profiled laser spot whose diameter we determined by gradually decreasing the laser energy and measuring the dimensions of the ablated craters, then using a linear regression.18 Once we knew the spot diameter, we could change the degree of periodicity by adjusting the scribing speed as required.19

Atomic force microscopy revealed the variety of textures we obtained (see Figure 2). The resulting modified surfaces also influence the transmission, reflection, and absorption of incident light: see Figure 3 for angular scattering behavior of 700nm light. The angular distribution intensity is illustrated for only 700nm-wavelength light to provide a better overview. Nevertheless, light trapping at this wavelength is required, and the experimental and simulated results are easier to compare for this wavelength. 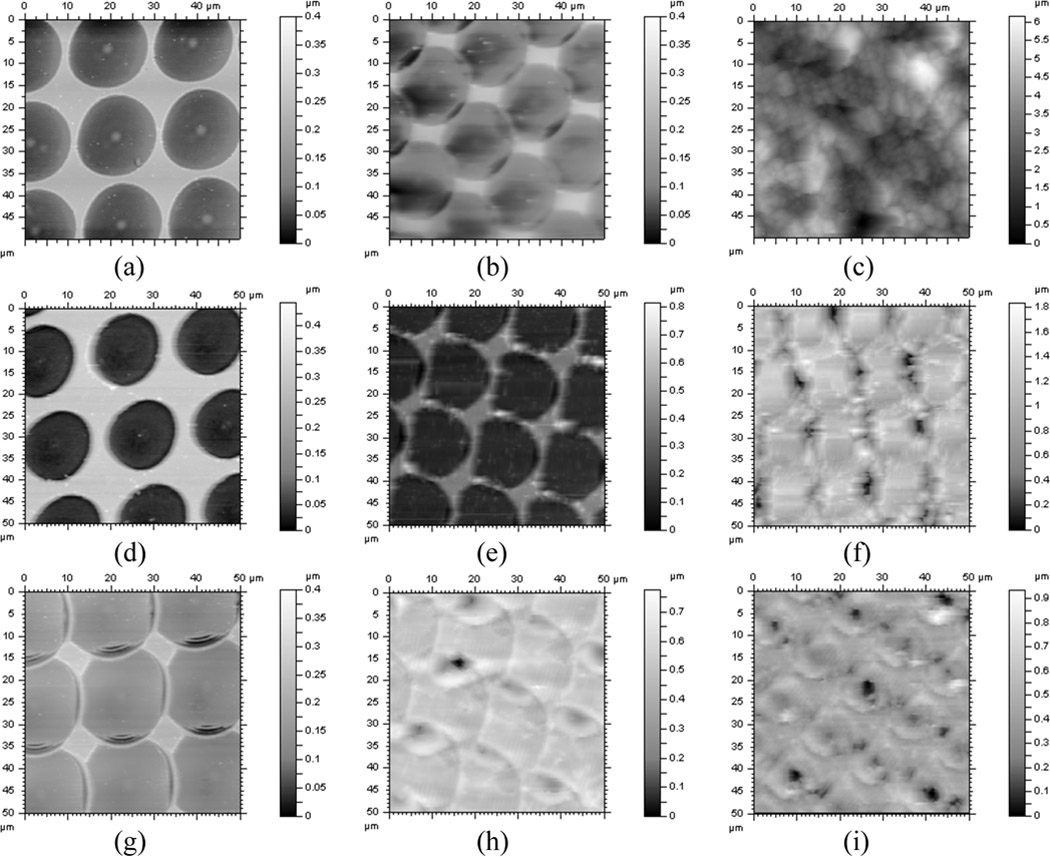 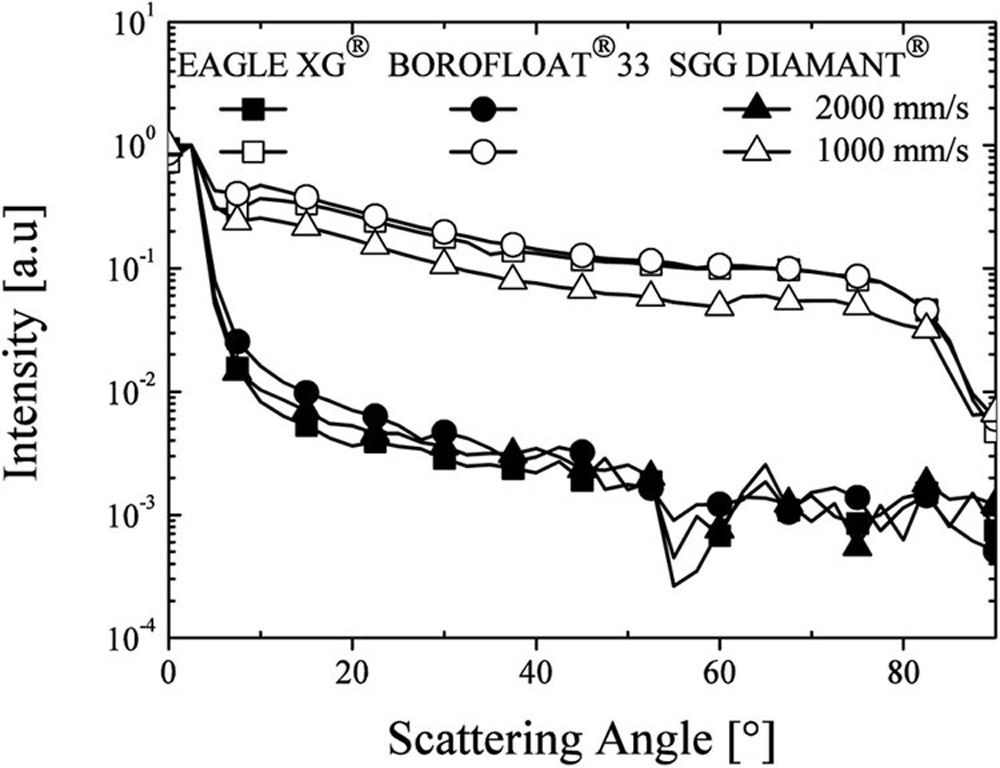 To demonstrate the influence of the refractive index, we simulated substrates with rounded and Gaussian craters with 1μm periodicity.20 The simulated layer stack is similar to the solar cell layer stack illustrated in Figure 1(b) and in Figure 4(a–e) (turned 90° counter-clockwise). The x-axis shows the width of the simulated layer stack, and the y-axis its height. The reference layer stack in Figure 4(a) consists (from left to right) of glass as a substrate, aluminum-doped zinc oxide (AZO) as the TCO front contact, and a bulk intrinsic amorphous silicon (i-aSi:H) layer as the absorber material. The thicknesses of the layers are 200nm, 800nm, and 3μm, respectively. A crater with a different shape was then applied to the glass surface, as shown in Figure 4(b) and (d). To simulate the change in refractive index observed around the textured crater, we inserted a 200nm layer on the glass surface with an increased refractive index in comparison to the bulk glass: see Figure 4(c) and (e). The change in refractive index is denoted by Δn. For the simulation, Δn of +0.005, +0.05, +0.5, and +1.0 was investigated. The optical generation rate profiles in the i-aSi:H we obtained for the differently textured substrates are illustrated in Figure 4. 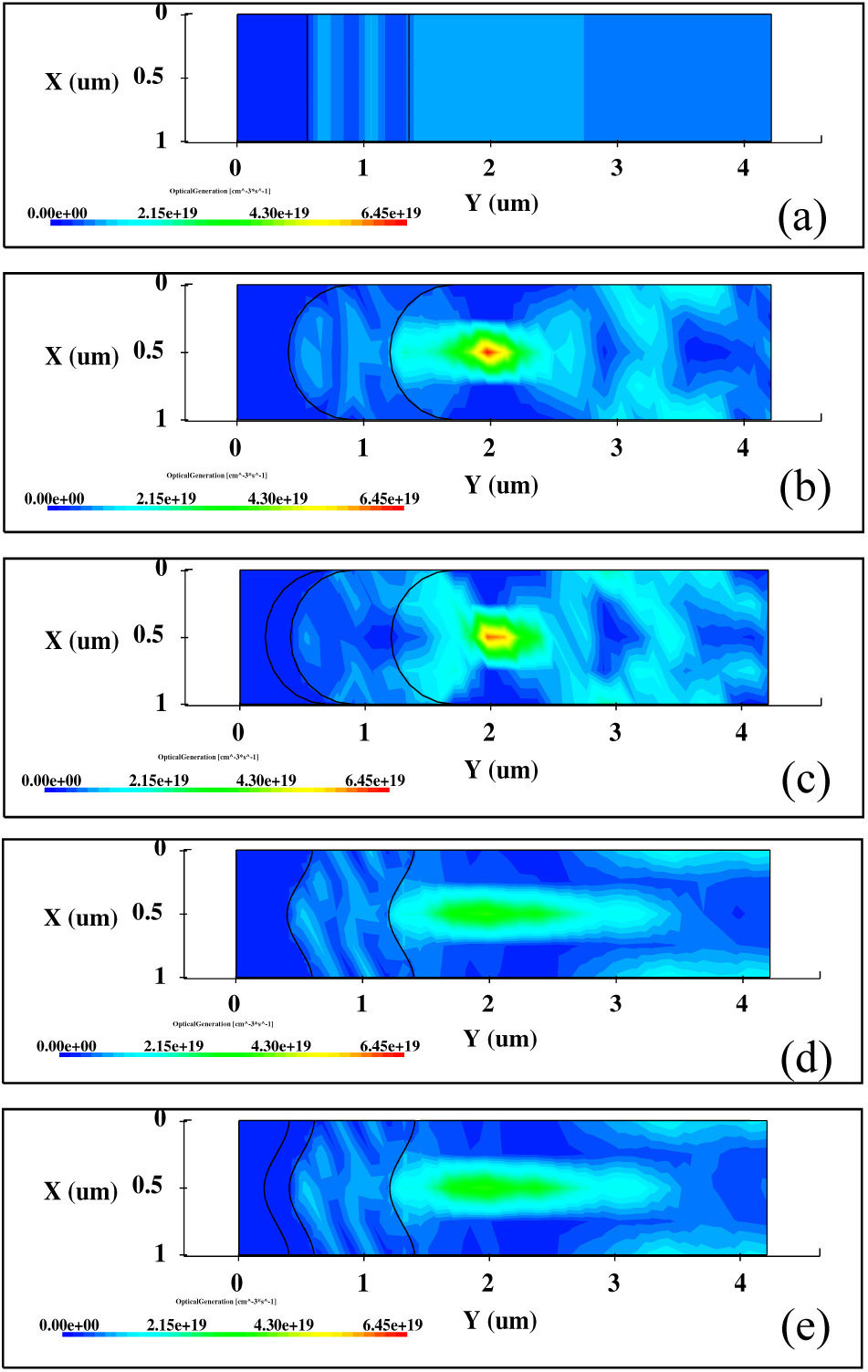 Figure 4. Optical generation rate at 700nm for (a) the reference, (b) a rounded crater, (c) a rounded crater with change in refractive index Δn=+0.5 for the modified region, (d) a Gaussian crater, and (e) a Gaussian crater with Δn=+0.5 for the modified region. The reference layer stack in (a) consists (from left to right) of glass as a substrate, aluminum-doped zinc oxide (AZO) as the TCO front contact, and a bulk amorphous silicon layer as the absorber material. The thicknesses of the layers are 200nm, 800nm, and 3μm, respectively. The x-axis shows the width of the simulated layer stack and the y-axis its height. The color bars show the intensity distribution of the optical generation rate in cm−2s−1. The maximum intensity in all color bars (a–e) is set to 6 .45 ×1019cm−2s−1.

Our experimental results show that the texture on the substrate changes from periodic to random when we reduce the scribing speed (see Figure 2). We observe similar differences in the textured glass whether the craters are single or overlapping. It has been suggested that the crater profile depends on the critical electron density evolution,21, 22 which is influenced by the electron collision time and recombination rate. These parameters vary between the different multicomponent glass types.23 More precise knowledge about the composition is therefore beneficial in predicting behavior. Furthermore, the thermal capacity (κ), density (ρ), and specific heat capacity (Cp) influence the thermal diffusion length (L), which is a measure of how far energy is dissipated.24

The simulation results show that micrometer-scale periodic rounded and Gaussian craters lead to a locally enhanced optical generation rate near the AZO/i-aSi:H interface in the p-i-n configuration (see Figure 4). They also show that an increased refractive index does not counteract light in-coupling, and the crater profile influences the scattering behavior. Textured substrates and those with a refractive index modified region reflect less light than the reference, suggesting that much thinner solar cells delivering a higher photocurrent density can be deposited onto the textured substrates.

Our future research will focus on alleviating stress25 in the laser-textured glass to reduce light absorption by the glass itself. We shall explore whether ablation with shorter wavelengths and a femtosecond laser reduces thermally induced stress while also achieving periodic rounded and Gaussian craters on a micrometer scale. We will also attempt to use the highly textured substrates for broadband light scattering in n-i-p (as opposed to p-i-n) configuration thin-film solar cells. In addition, we will investigate alternatives to AZO front contacts.

Kambulakwao Chakanga is a doctoral student at Carl von Ossietzky University in Oldenburg and holds a German Federal Environmental Foundation (DBU) scholarship for research at NEXT ENERGY, an independent research institute on the university campus.