Alcohol consumption has been shown to be implicated in more than 60 human medical conditions, including malignant cancers, neuropsychiatric and cardiovascular disorders, gastrointestinal disease, fetal alcohol syndrome, and intentional and unintentional injuries.1 Despite the prevalence of alcohol consumption and abuse, the underlying neurochemical alterations that play a primary role in developing and maintaining such abuse are not known.

Over the last two decades, research has pointed to dopamine (DA) as the primary neurotransmitter that is involved in positive reward and pleasurable conditions. The VTA (ventral tegmental region) is an important region of the dopamine system that is connected by dopaminergic neurons to another brain area, the nucleus accumbens (NA). This area plays an integral role in the regulation of motivated behaviors, and alterations of this circuit have long been hypothesized to contribute to the cause of alcoholism. However, until recently technical limitations have made it impossible to investigate the causal role of DA transmission in mediating these behaviors. Using newly developed optogenetic tools, we have explored the causal relationship between specific patterns of VTA dopamine cell activation using light and abusive drinking behaviors in rats.2

Many studies have implicated a DA mechanism in the regulation of ethanol drinking.3–7 However, it is not possible to selectively stimulate DA release from discrete DA neurons using electrical or chemical stimulation. This is absolutely necessary to test the causal link between DA neuron activation and drinking. Optogenetics has allowed us to optically stimulate dopaminergic cells with exceptional selectivity and temporal precision.

While several transgenic strategies have been developed to target opsins (light-sensitive proteins) to dopaminergic neurons in rodents,8, 9 we have developed a novel viral approach that can be used in any mammalian species and potentially even humans. Here, the expression of channelrhodopsin-2 (ChR2), a mutated cell membrane protein that opens ion channels in response to light, was driven by a tyrosine hydroxylase (TH) promoter. The TH promoter confined production of ChR2 to only dopamine neurons, and not any other type of neurons. We applied laser light to the VTA region to stimulate DA transmission.

We showed that we could deliver the ChR2 gene to dopamine neurons, which allowed us to use the light to selectively control the timing/amount of DA released in the NA without affecting DA dynamics in the neighboring area (in the bordering brain region). We also showed that we could use optogenetic activation of the VTA to reduce the consumption of ethanol in rats. Finally, we demonstrated that only specific optogenetic light pulses (frequency and duration) succeeded in affecting drinking behavior.

Figure 1. Light activation of ventral tegmental area (VTA) dopaminergic neurons can mimic (A) phasic and (B) tonic dopamine (DA) release. The data is presented as a standard error of mean (SEM) where the mean is in red and the two sets of SEM points are in black.2 (Reproduced with permission.2) 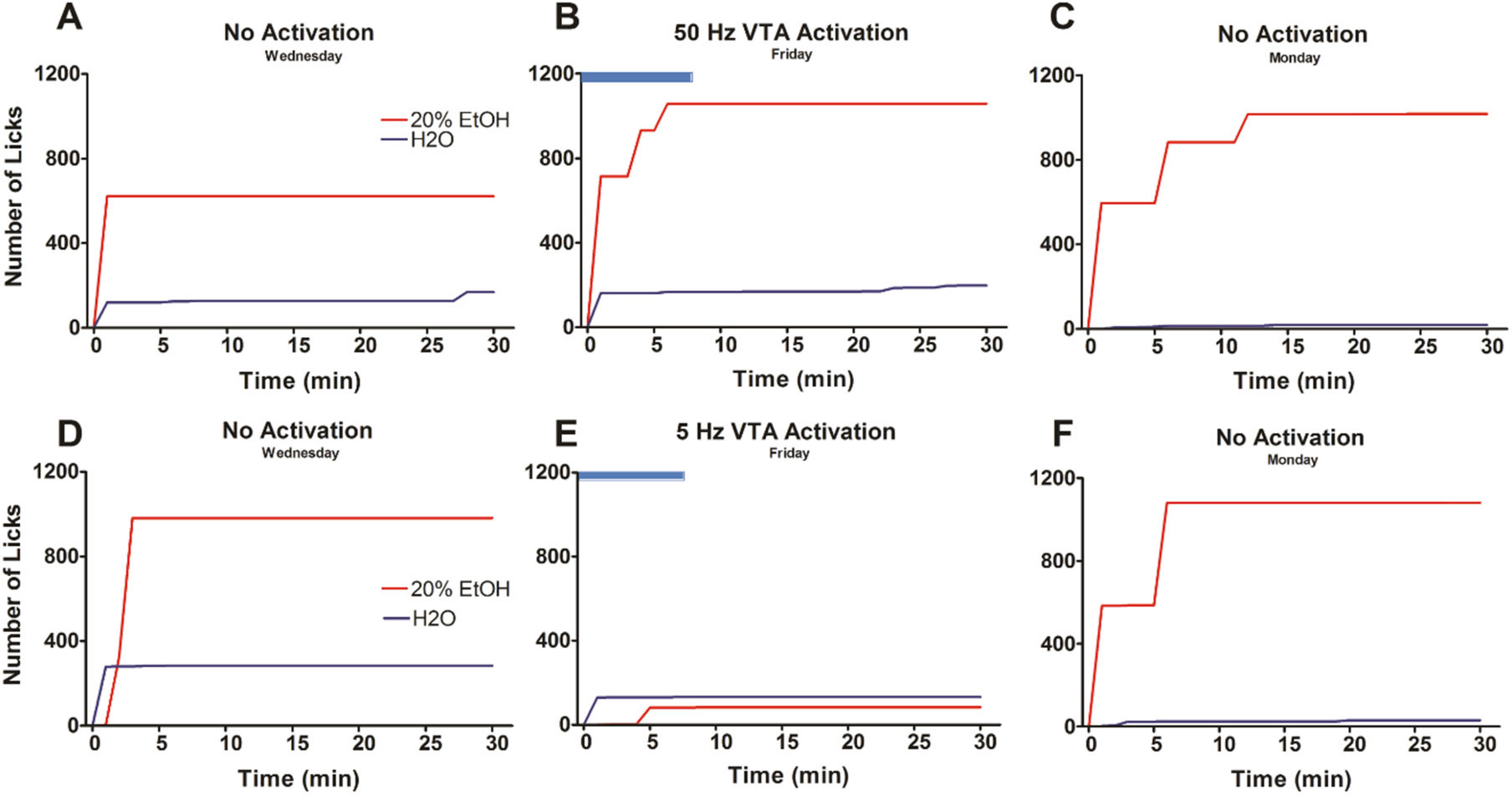 In summary, we have shown the powerful potential of optogenetics to improve our understanding of neurocircuitry central to the risk-reward behavior of alcohol abuse. Future work will investigate several questions, including whether this effect is exclusively mediated in the NA, and whether it is dependent on changes in the signaling of either or both of the cell-surface dopamine receptors (D1R or D2R).

We are grateful to the Wake Forest University (WFU) Biology Microscopic Core Imaging Facility under the direction of Glen Marrs for use of the Zeiss LSM 710 confocal microscope. We would like to thank Ann Chappell for expert technical assistance. This research was supported by National Institutes of Health T32 grants (AA007565 to Dominic Gioia, AA020564 to Evgeny Budygin, AA021099, AA017531, and AA010422 to Jeff L. Weiner, and DA024763 to Caroline Bass). Additional support was given by the WFU Cross-Campus Collaborative Fund to Evgeny Budygin and Keith Bonin.

Evgeny Budygin is an assistant professor specializing in neurochemistry and neuropharmacology. His recent research is in behavioral neuroscience applied to exploring dopaminergic mechanisms of alcohol addiction using optogenetics, and measuring dopamine dynamics in rodent brains in real time.

Jeff Weiner is a physiology and pharmacology professor. The focus of his research is to employ animal models along with sophisticated behavioral and neurobiological approaches to unravel the brain changes that contribute to alcohol addiction vulnerability.

Caroline Bass is an assistant professor in pharmacology. Her research focuses on understanding the way the brain changes in response to substance abuse using advanced molecular manipulations in animal models. She specializes in the development of novel viral vector systems to manipulate gene expression, cell function, and targeted gene delivery.