There is increasing demand for miniature integrated circuits and magnetic storage and hence for cost-effective miniaturization of semiconductor structures to 10nm and below. A promising approach is directed self-assembly (DSA) of copolymers in thin films.1–3 Block copolymers are long, flexible macromolecules composed of two or more chemically distinct building blocks that are bound into a single stringlike molecule. In a dense melt, the distinct blocks repel each other, but the chemical connectivity along the macromolecular backbone prevents macroscopic phase separation (demixing). Instead, the incompatibility between the blocks, χN, results in the spontaneous formation of dense, periodic domain structures on the length scale of the macromolecular size, i.e., 5–70nm. Depending on the molecular architecture, copolymers self-assemble into a variety of intricate periodic structures, including lamellar stripes and hexagonally arranged arrays of cylinders.

DSA refers to guiding the long-range orientation and registration of the spontaneous self-assembly of copolymers in thin films by chemical or topographical surface patterns.1, 2 These guiding patterns can be fabricated by well-established lithographic techniques. The combination of top-down lithographic patterning techniques and bottom-up molecular self-assembly has been shown to create large-area, defect-free, registered, dense, periodic structures and even device-oriented features such as T-junctions and basic integrated circuit geometries.4 Additionally, the domain interfaces are characterized by thermodynamic tension and bending rigidity, reducing the line-edge-roughness (LER) of the morphology.

Computational modeling of DSA can assist in two ways. First, it can optimize material parameters such as film thickness, interaction between copolymer blocks and substrate, geometry of confinement (see Figure 1), and exploring the consequences of specific details of the molecular architecture of strongly incompatible, high-χ materials. Second, as our work shows, it can provide fundamental insights into the physical mechanisms of DSA, addressing both the equilibrium structure and thermodynamics and the kinetics of self-assembly. 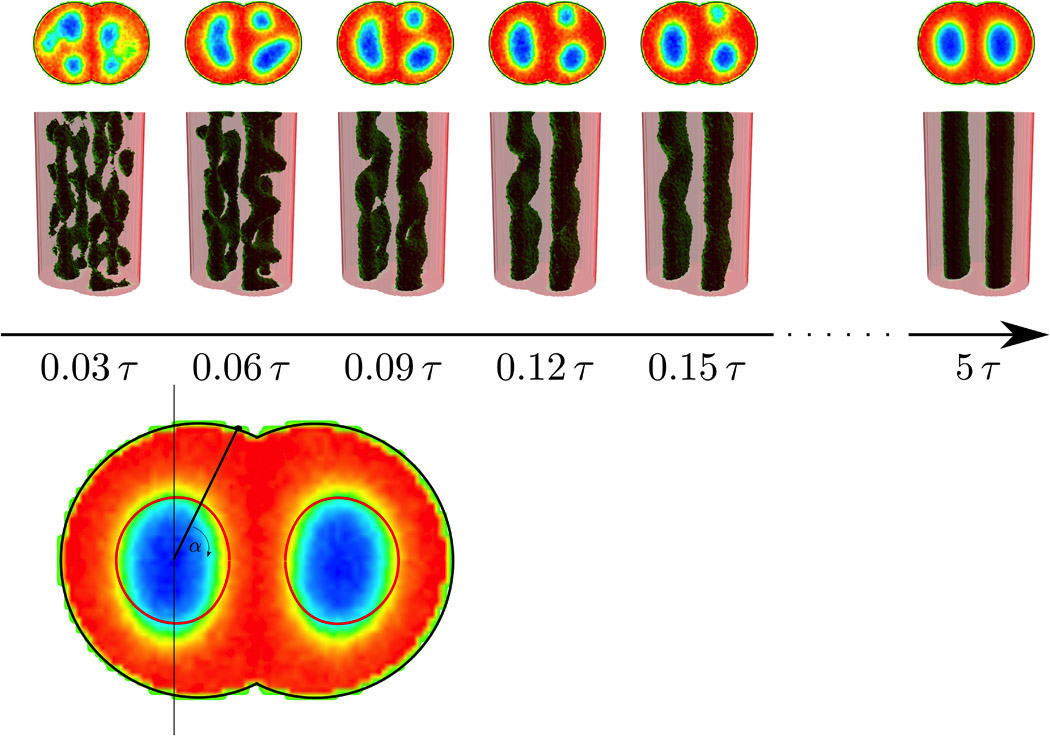 Figure 1. Predicted time evolution of directed self-assembly by graphoepitaxy from a disordered state to a double-contact hole. The side walls of the confinement (pore) attract the majority component of the copolymer. Top and side views depict the structures predicted by coarse-grained simulations at different times, measured in units of the time, τ, it takes a polymer to diffuse over its size, Re. Below: Using an interface Hamiltonian that describes the free energy of the structure only by the location of the domain interface, we have optimized the confinement (pore shape) to place the two cylinders of the minority component at a predetermined distance. The prediction of this simpler model for the domain interface (red line) is compared with the concentration profile of the particle simulation. The equilibrium spacing is used to match the length scale of the two models.

We have studied the salient thermodynamics of block copolymer materials by coarse-grained models that account for the macromolecular properties through only a minimal set of relevant interactions. These are the connectivity and architecture of the macromolecular backbone, the incompatibility of the different blocks, and the density and low compressibility of the polymer melt. These three interactions suffice to describe the universal aspects of self-assembly in the bulk, and their strength can be directly related to experimentally accessible quantities, i.e., the molecular size, Re, the product, χN, of the Flory-Huggins parameter, which describes the repulsion between the different segments, and the number of segments. For DSA applications, the surface free energies of the polymer components in contact with the guiding patterns and surfaces (air or supporting substrate) are also relevant. Such coarse-grained models can be studied by particle simulations or can be rewritten in terms of polymer field theories or approximations of them (e.g., self-consistent field theory).5

Using computer simulations of coarse-grained models, we have explored the free-energy costs of mismatch in length scale or symmetry between the DSA guiding patterns and the intrinsic morphology of the block copolymer material, in collaboration with groups at the University of Chicago led by Nealey and de Pablo. A spatially localized mismatch (e.g., at a bend or a crossing of lines) can be mitigated by ‘defectants’ that are additional components such as short homopolymers or nanoparticles that are blended with the copolymer or that are locally generated by supramolecular bond formation/breaking.6 In a similar way to how ‘surfactants’ aggregate to an interface and reduce the interfacial tension, defectants segregate to parts of the structure that differ from the bulk copolymer morphology and thereby reduce the free-energy cost of replicating this non-bulk structure by selective swelling or locally adjusting the molecular architecture. This strategy of tailoring the DSA materials increases the potential range of structures that can be fabricated by DSA.

Self-consistent field theory7 or more approximate descriptions, such as Ginzburg-Landau models8 or interface Hamiltonians that are applicable to weak and strong segregation, respectively, can estimate free energies of self-assembled structures with great computational ease that allows for systematically optimizing guiding patterns for specific structures (see Figure 1).

We have also considered the kinetics of structure formation. We used coarse-grained models to estimate the excess free energy of typical defect structures that arise in the course of DSA under non-optimized conditions. Encouragingly, defect free energies are on the order of a hundred kBT or more, where kB and T denote Boltzmann's constant and temperature, respectively. Therefore the equilibrium density of defects is vanishingly small.9 The experimental observation of defects in the temporal course of the DSA process under non-optimal conditions thus highlights the importance of the kinetics of self-assembly. Since many macromolecules participate in a defect, the excess free energy of a defect per molecule is small, giving rise to a tiny thermodynamic driving force for defect annealing and concomitant, protracted time scales.

Tailoring the kinetics of DSA not only mitigates the formation of defects in the initial stages of DSA and facilitates defect removal, thereby reducing tempering times, but may also trap the kinetics of structure formation of the copolymer material in a desired structure even if it is only metastable.10 For instance, guiding patterns may concurrently nucleate multiple grains of periodic structures with correlated position and orientation.11

There have been advances in computational techniques, such as the improved string method12 or computation of the fastest growing modes of structure formation,13 that allow for systematically exploring the rugged, glasslike free-energy landscape, in which DSA proceeds. Nevertheless, the computational tools for predicting the kinetics of DSA are in their early stages. In view of its great potential, we expect that the computational modeling and experimental control of the kinetics of the DSA process will gain in practical importance.

In summary, we have considered the equilibrium structure and thermodynamics of block copolymer materials, as well as their kinetics of structure formation. Computational methods can estimate free energies of self-assembled structures, and in future we will work to solve the inverse problem to design lithographically manufacturable guiding patterns for specific target structures. We will pay particular attention to fluctuation effects and local details of the molecular architecture at the narrow domain interfaces that become increasingly important when high-χ materials are employed to reduce structure sizes.

We expect computational modeling and experimental control of the kinetics of DSA to become increasingly important in the future. However, to fully exploit the potential benefits of this ‘process-directed self-assembly,’ such as eliminating the formation of defect structures in the early stages of DSA and reproducibly trapping the structure formation in desired metastable structures, we have two challenges to overcome in future work. First, we are working to refine computational methods to account for, e.g., the influence of an evaporating solvent or the role of conformational stress. Second, we need to obtain experimental information about the very initial stages of the DSA process on the time scale of seconds.

Ulrich Welling studied chemistry at Philipps University in Marburg, Germany, and received his PhD in 2011 for using molecular dynamics simulations to understand the static and dynamic properties of complex liquids. In the same year he joined the ITP, where he works on simulations of block copolymers.

Weihua Li received his PhD in 2004 from Shanghai Jiao Tong University, China. After postdoctoral studies in Canada, he took a faculty position as associate professor at Fudan University, Shanghai, China, in 2007. In 2013 he joined the ITP group working on the European Union's CoLiSA project.

Marcus Müller received his PhD in 1995 from Gutenberg University, Mainz, Germany. He was an associate professor at the University of Wisconsin-Madison before joining the ITP in 2005 as a Lichtenberg Professor supported by the Volkswagen Foundation. His research interests focus on computational soft matter.