Many developing technologies based on quantum spins rely on magnetic fields to control the spins. As spin-based quantum technologies evolve, however, nonmagnetic methods of spin control become attractive as tools for integration with existing technologies and as new sensing modes. A useful prototype spin-based technology is the nitrogen-vacancy (NV) center in diamond. An NV center is a point defect in diamond where a nitrogen atom substitutes for one of the carbon atoms and is adjacent to a vacancy in the lattice. The dangling bonds at the vacancy form a confined electronic state with a triplet spin. The quantum state of this spin can exhibit long-lived coherence even at room temperature, unlike many other solid-state systems, which require cooling to cryogenic temperatures for comparable performance. In proof-of-concept experiments, NV centers have already been employed as precision magnetometers,1, 2 thermometers,3,4 and electrometers5 with nanometer spatial resolution. Here we report on our work using lattice vibrations to drive NV center spins mechanically, which has demonstrated a nonmagnetic way to control spin in quantum devices.6

Another reason to study interactions between spins and mechanical lattice vibrations is to explore a hybrid quantum interface between an individually addressable quantum system (NV centers) and the quantized excitations of a mechanical resonator (phonons). Previous work used magnetic field gradients to couple the position of a mechanical resonator to an NV center spin transition energy, enabling mechanically modulated spin dynamics and phonon sensing.7 In our experiment, we examined spin transitions driven directly by resonant mechanical vibrations with no magnetic mediation. Although our mechanical resonator is operated in the classical regime, the interaction that we study corresponds to a spin flip down (up) accompanied by a phonon creation (annihilation).8 In the quantum regime of the mechanical resonator, this spin-phonon system would behave like an atom-photon system in an optical cavity.

Our work is performed in a static magnetic field of about 190G, where the NV center spin states, |ms〉, are described by the quantum number ms={−1, 0, +1}. Room-temperature quantum spin control is conventionally achieved by applying a gigahertz-frequency magnetic field to drive a magnetic dipole transition. Such transitions are subject to the dipole selection rule Δms=±1. That is, magnetic transitions occur only between |0〉 and either |−1〉 or |+1〉. Resonant mechanical driving via the spin-phonon interaction allows direct driving of the magnetically forbidden |−1〉↔|+1〉 transition: see Figure 1(a).

In our experiment, the gigahertz-frequency stress wave used to drive the |−1〉↔|+1〉 transition was generated by a microelectromechanical (MEMS) device fabricated on one face of a single-crystal diamond: see Figure 1(b). This mechanical resonator, known as a high-overtone bulk acoustic resonator (HBAR), is a piezoelectric transducer fabricated from an aluminum nitride film. When we apply a gigahertz-frequency potential to the transducer, it launches large-amplitude (≈10MPa) stress waves into the substrate.

To demonstrate mechanical spin driving, we performed optically detected mechanical spin resonance (ODMSR) on an ensemble of NV center spins. The experimental protocol is depicted in Figure 2(a). First, we initialized the state by polarizing the spin into |0〉 with optical pumping, and then we transferred the spin from |0〉 to |−1〉 using magnetic resonance techniques. Next, we pulsed the HBAR with a microwave frequency voltage tuned to a particular mechanical resonance. If the resulting stress wave was resonant with the |−1〉↔|+1〉 energy-level splitting, spin population was transferred into |+1〉. We then used magnetic resonance to transfer any spin population remaining in |−1〉 back to |0〉, where the population was read out optically. Any population that had been mechanically driven into |+1〉 was missing from the population in |0〉. We repeated this measurement as a function of the static magnetic field to vary the |−1〉↔|+1〉 energy-level splitting. Figure 2(b) shows three mechanically-driven spin transitions, each of which corresponds to a nitrogen-14 hyperfine spin state of the NV center (i.e., the precise energy levels depend on the spin state of the nitrogen nucleus). We verified that the spin driving was purely mechanical by measuring ODMSR as a function of depth within the diamond to image the stress standing wave generated by the HBAR: see Figure 2(c). 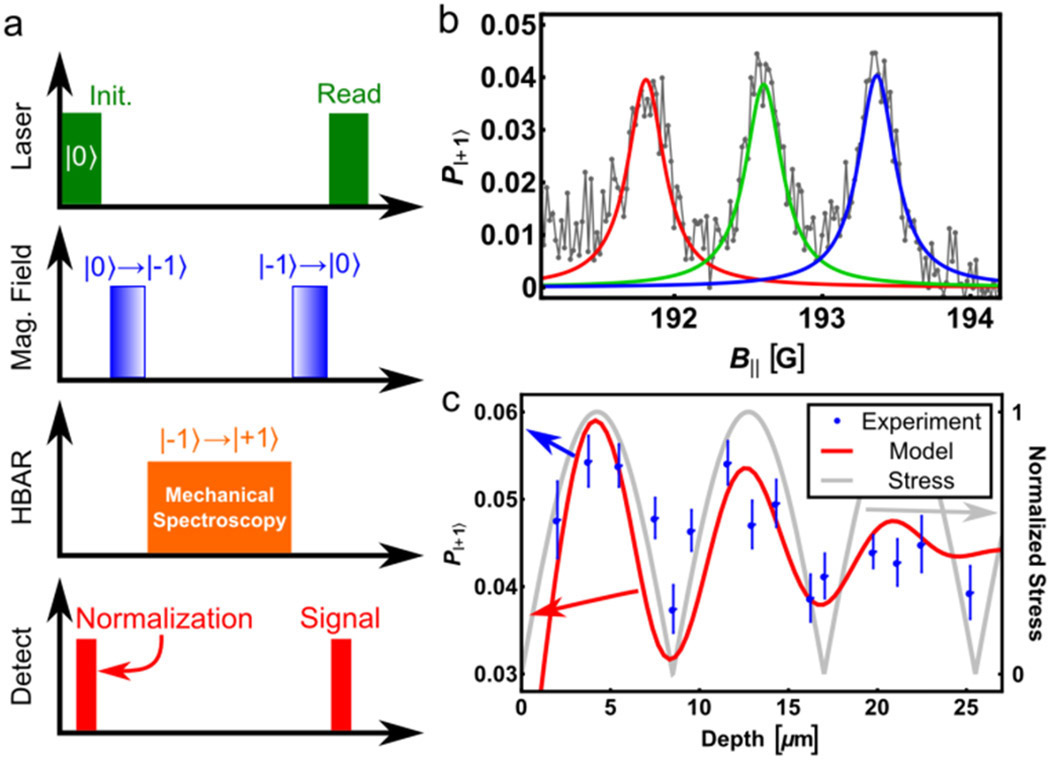 Figure 2. (a) Optically detected mechanical spin resonance (ODMSR) pulse sequence (horizontal axis is time). The NV center spins are initialized in state |0〉 by a laser pulse (Init.) and then transferred to |-1〉 by magnetic (Mag.) resonance. The HBAR's mechanical oscillations drive some spins to |+1〉, and the remaining |-1〉 population is magnetically transferred back to |0〉 and detected optically. (b) ODMSR spectrum of P|+1〉, the population that is driven into |+1〉 by spin-phonon interactions, as a function of the static magnetic field, B∥. (c) Population driven mechanically into |+1〉 as a function of depth inside the diamond. The signal varies with the spatial periodicity of the stress standing wave. (Figure adapted from MacQuarrie et al.6)

In future work, coherent mechanical driving of NV center spins can be achieved by addressing isolated NV centers and increasing the mechanical driving fields with modest engineering improvements. Such quantum-control driving could be useful for enhanced magnetic field sensing using a |−1〉 and |+1〉 superposition state.2 Additionally, mechanical spin driving establishes the possibility of using NV centers as precision sensors for gigahertz-frequency strains. One could envision integrating such a quantitative strain sensor with a MEMS accelerometer in a similar spirit to the recently proposed NV-based gyroscopes.9, 10 This interaction could also have a future in strongly coupled NV-nanomechanical resonators. Theoretical work describing approaches to spin squeezing8 and resonator cooling11 using interactions of NV centers with mechanical resonators suggest a path forward, although more work needs to be done to realize these concepts.

Evan MacQuarrie is a PhD candidate.

Gregory Fuchs is an assistant professor.