Optimizing window glass assemblies is an interesting challenge in that it is necessary to manage four different energy bands and provide the best insulation, whether it is day or night, and whether the average outside temperature is higher or lower than the target indoor temperature. There are literally thousands of ‘energy efficient’ glasses available, all making claims of efficiency, yet there is no easy way to determine which is the best solution for any given situation. I have simplified the selection process, based on the underlying physics, and found that triple pane windows with multilayer silver coatings and inert gas fill are the optimal solution.1

The first challenge is that a single window solution must work in an environment with large variation in temperature from season to season and from day to night, and last for over 30 years. I realized that, on average, there are only three relevant boundary conditions. First, where the average outside temperature is less than the house temperature. Second, where the average temperature is greater, and third, at night. There are four different energy bands (visible, solar near-IR radiation, re-radiated IR, and thermal convection) that can pass through a window and must be managed effectively.

The different energy bands that are transferred through a window are shown in Figure 1 and Figure 2. The left column of Figure 1 shows the visible, solar near-IR, and mid-IR black body re-radiation. The middle column shows how standard (soda lime) glass transmits the visible and the solar near-IR but blocks the mid-IR re-radiation. 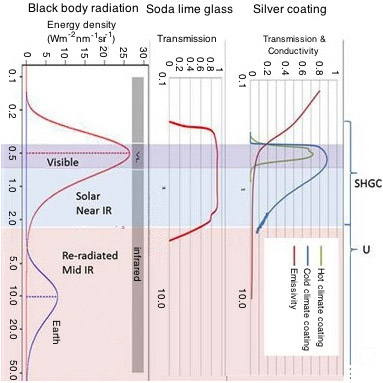 I applied simple analytical models to each of the energy bands to find each band's key factors. A simple thermal conduction model3 was applied to multi-pane glass assemblies with trapped layers of low conductivity gas. A similar model was applied to the black body re-radiation that occurs in the mid IR, which is blocked most effectively by metal coatings.4 Solar heating of the house occurs in the near IR and can be blocked, or passed, by multilayer coatings with thin metal layers, which if sufficiently thin will pass visible radiation.

To calculate the optimal window performance, I applied design rules from the analytical models to the library of glasses in the Department of Energy (DOE) databases2 and calculated the properties of a number of glass assemblies using public domain programs5 developed by Lawrence Berkeley Labs for the DOE to be used with the International Glass Database2 to provide an industry standard reference for selecting windows.

This analysis shows that window selection can be distilled down to two scenarios, whether the average temperature is higher or lower than the target house temperature. Different multilayer thin-silver-coated triple-pane windows with Kr gas fill provide the best insulation for hot or cold climates. The next step is to fabricate complete windows conforming to these designs and compare their measured properties with the predicted ones.

Mike Watts has been involved in the patterning, processing, and properties of thin films for more than 30 years. He started in semiconductor processing and has migrated to non-traditional applications over time.