One of the key characteristics of a photovoltaic device is the ability to capture incident photons. Reflected light is uncaptured energy, and thus various antireflection (AR) schemes have been developed to raise the efficiency of solar cells.1 Quarter-wavelength AR coatings have been widely used on the front surface, but their effectiveness typically depends on wavelength and incident angle.2 In addition, high-quality AR coatings rely on expensive chemical or physical deposition processes.2

Nano- and microstructures with broadband light-trapping capability can significantly suppress front surface reflection, but many of them require costly and/or destructive fabrication methods, such as lithography and etching.3 Without careful design and realization, incorporating active photovoltaic materials into nano- and microstructures introduces defects and increases surface recombination.3

We have developed a simple molding process to prepare flexible plastic AR films with 3D nanocone arrays on the front surface.1 On high-efficiency cadmium telluride (CdTe) thin-film solar cells on glass substrates, they effectively reduce front-surface reflection over a broad range of incident angles, including oblique angles, and boost the daily energy output by ∼7%. The AR films readily attach to flat substrates, such as glass and silicon, without adhesive glue, and are also superhydrophobic, suggesting they are self-cleaning.

We fabricated flexible nanocone films by molding polydimethylsiloxane (PDMS) with anodic alumina inverse-nanocone (i-cone) arrays fabricated on aluminum (Al) substrates: see Figure 1(a–c). An electrochemically polished Al foil was imprinted using a silicon stamp with hexagonally ordered nanopillars: see Figure 1(a). Thereafter, the i-cone array was fabricated by a multitep anodization and wet-etching process on the imprinted Al foil: see Figure 1(b).4 Finally, premixed PDMS (Sylgard 184 from Dow Corning in a 10:1 ratio to curing agent) was poured onto the gold-coated template followed by a degas and curing process at 80°C: see Figure 1(c). Afterwards, the ∼0.2mm-thick PDMS nanocone film was peeled off the i-cone template: see Figure 1(d). This nanoimprint process is much more efficient than lithography. 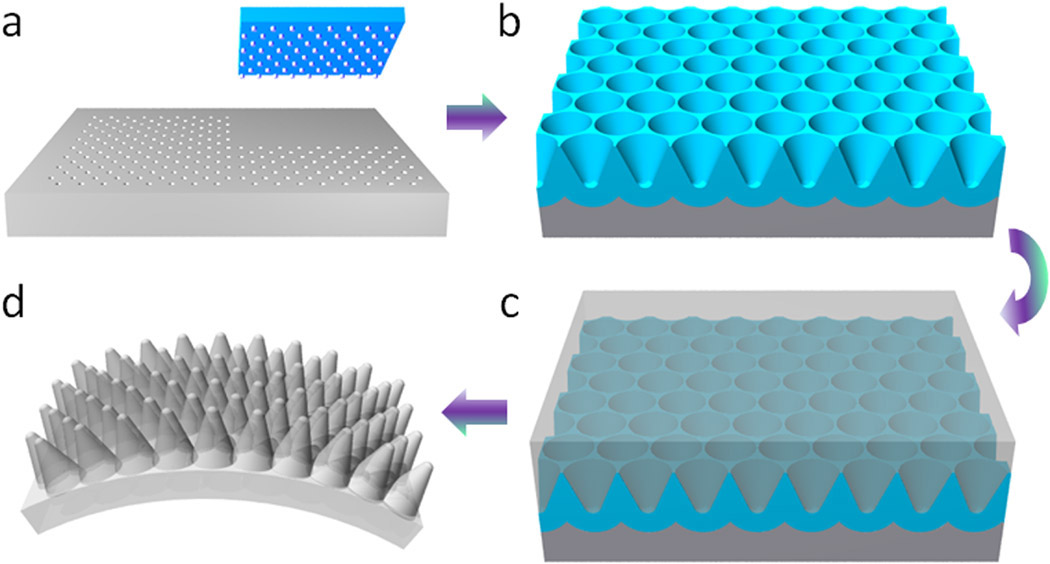 We examined the effectiveness of the nanocone film at reducing reflection by high-efficiency CdTe solar cells: see Figure 2(a) for the structure of the solar cell with our nanocone PDMS film on top. Intriguingly, we found that the PDMS nanocone arrays are superhydrophobic, having a large water contact angle: see Figure 2(b) and (c) for the contact angles of a 2μL water droplet on the nanocone PDMS film and a flat PDMS film, respectively. Superhydrophobicity gives the nanocones an advantageous self-cleaning function. Strong van der Waals interactions between PDMS and glass mean that PDMS can be easily and firmly attached to flat glass substrates without using other adhesives. 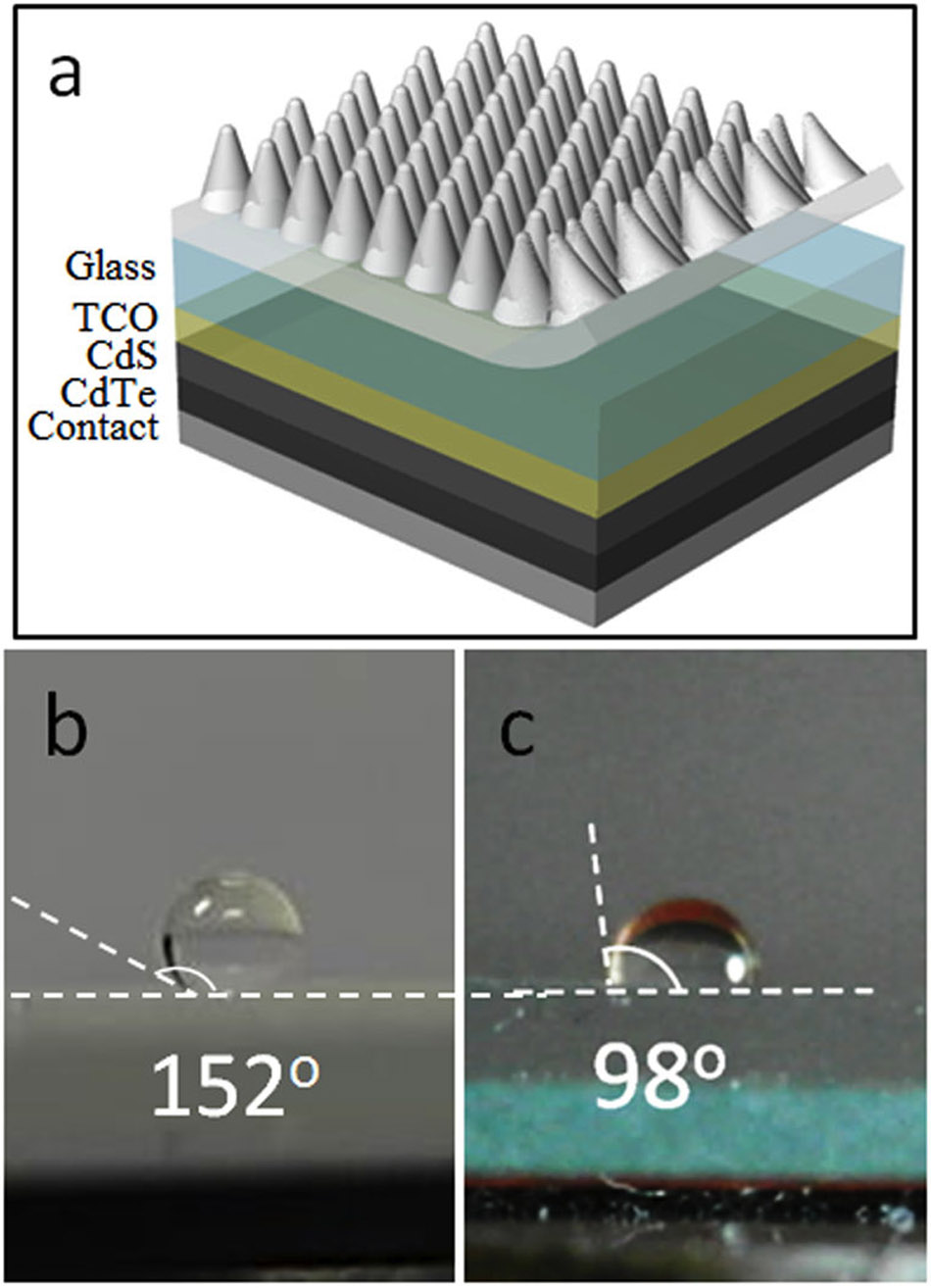 Figure 2. (a) Schematic structure of a cadmium telluride (CdTe) solar cell with nanocone polydimethylsiloxane (PDMS) film attached on the top. A drop of water (b) on the nanocone PDMS film, and (c) on the flat PDMS film. TCO: Transparent conductive oxide. CdS: Cadmium sulfide. (Adapted with permission.)1

We also measured the reflectance of a CdTe device with and without PDMS nanocones for incident light angles between 0 and 60° to the normal: see Figure 3(a). It increases progressively from 8.5 to 13.2% without nanocones as the incident angle increases. Surprisingly, the reflectance of a nanocone device remains unchanged at ∼5% for all incident angles, which suggests that the nanocone AR benefit is greater for higher incident angles. To further evaluate this point, we plotted power output of the device against sunlit hours in a day, assuming that normal incidence corresponds to noon and 60° to four hours before or after noon: see Figure 3(b). The nanocone device shows an all-day improvement in electrical power output. The inset shows the nanocone AR solar cell generated 1.063kWh/m2 daily energy output, which is close to 7% more than the flat device. 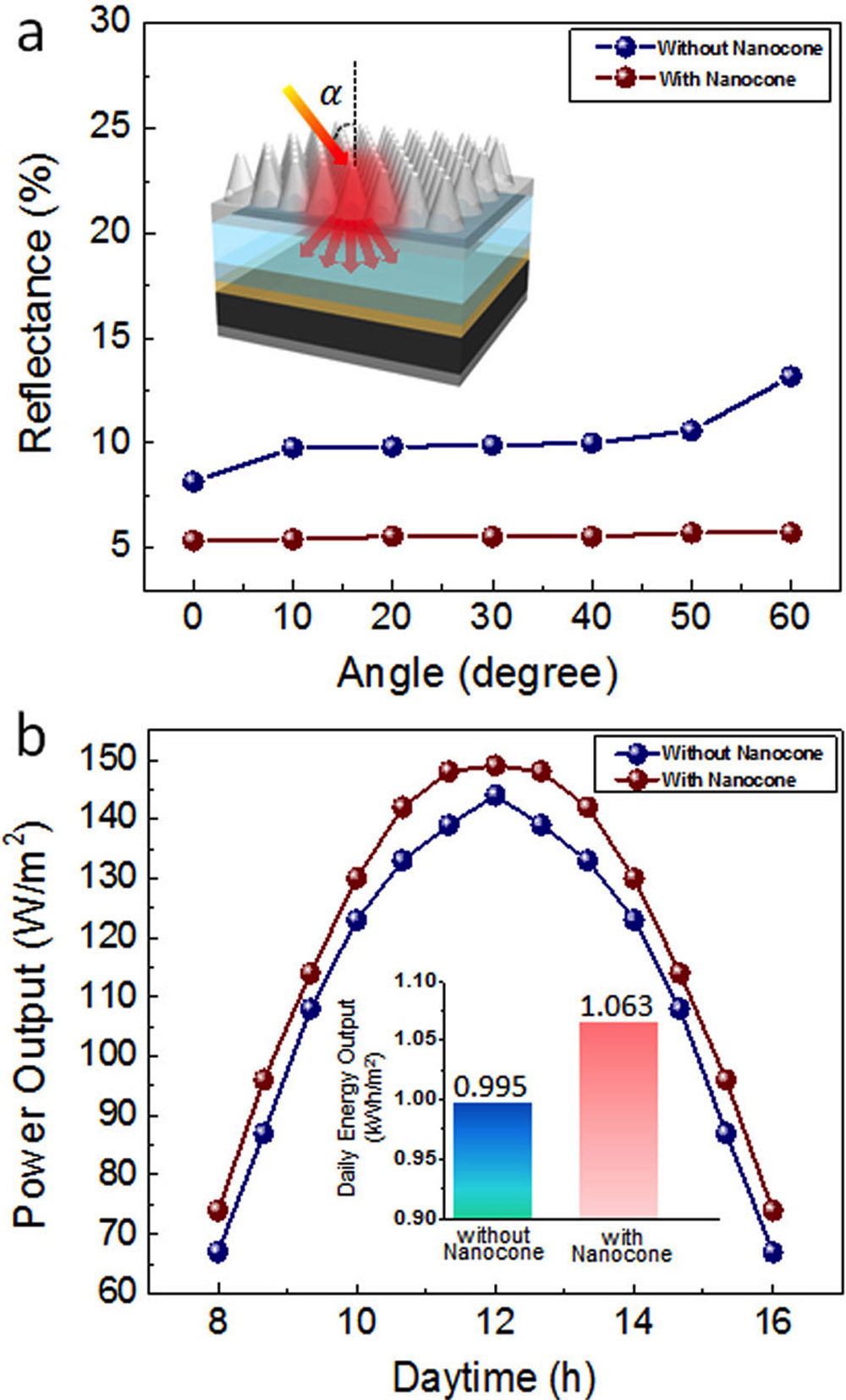 In summary, we have developed a simple process to fabricate flexible and self-cleaning nanocone arrays as an AR layer for high-efficiency solar cells. The AR effectiveness improves with the light's incident angle, substantially enhancing the daily electrical energy output to over 1kWh/m2. In addition, the nanocone structures are superhydrophobic and are expected to be self-cleaning. They also readily attach to smooth substrates without adhesive. We have examined their effectiveness with CdTe solar cells, but expect the nanocone array films to also boost the performance of other photovoltaic devices by reducing reflectance. We will next explore other choices of plastic materials with different refractive index, mechanical strength, and so forth, to further enhance the practicality of this technology to benefit different types of solar panels. We are also considering how to develop a high-throughput and large-scale fabrication scheme.

Zhiyong Fan is an assistant professor. His research interests include engineering novel nanostructures for technological applications, including energy harvesting, electronics, and sensors. He holds multiple patents on photovoltaics and has coauthored over 80 journal papers

Qingfeng Lin is a PhD candidate. His current research interests focus on novel fabrication of 3D nanostructures, and applications of functional nanomaterials for energy harvesting, energy storage, and nanoelectronics.