Nanotechnology is providing a new set of tools to the engineering community to create nanoscale components that are able to perform simple specific tasks, such as computing, data storing, sensing, and actuation. Integrating several of these nanocomponents into a single device just a few cubic micrometers in size will enable the development of more advanced nanodevices. By exchanging information, such nano-devices will be able to achieve complex tasks in a distributed manner.1 The resulting nanonetworks will enable unique applications in the biomedical, industrial, and military fields, such as advanced health monitoring systems, nanosensor networks for biological and chemical attack prevention, and wireless network-on-chip systems for very large multicore computing architectures.

For the time being, the communication options for nanodevices are very limited. Miniaturizing a conventional metallic antenna to meet the size requirements of the nanodevices would require very high operating frequencies (hundreds of terahertz). The available transmission bandwidth increases with the antenna resonant frequency, but so does the propagation loss. With the likely very limited power of nanodevices,2 this approach would compromise the feasibility of nanonetworks. In addition, it is not clear how a miniature transceiver could be engineered to operate at such very high frequencies. Moreover, intrinsic properties of metals vary at the nanoscale, and common assumptions of antenna theory might no longer be valid.

An alternative is to use novel nanomaterials such as graphene (i.e., a layer, one atom thick, of carbon atoms in a honeycomb crystal lattice)3 to develop nanoantennas. In particular, the peculiar dynamic complex conductivity of graphene4 enables the propagation of tightly confined electromagnetic modes at the interface between graphene and a dielectric material, which are commonly referred to as surface plasmon polariton (SPP) waves. Many metals and metamaterials support the propagation of SPP waves, but usually at very high frequencies (e.g., IR and optical frequency bands). In contrast, SPP waves on graphene have been observed at frequencies as low as in the terahertz band and, moreover, can easily be tuned by material doping.

We have recently proposed a graphene-based plasmonic nanoantenna for terahertz band communication among nanodevices5, 6 (see Figure 1). The nanoantenna is composed of a graphene nanoribbon (GNR, the active element), mounted over a metallic flat surface (the ground plane), with a dielectric material layer in between (to support the GNR as well as to change its chemical potential by material doping). To analyze the performance of the nanoantenna, we have developed an analytical framework by starting from the dynamic complex conductivity of GNRs. Contrary to existing studies, which use the conductivity of infinitely large graphene sheets, we take into account the impact of the lateral confinement of electrons in GNRs.7 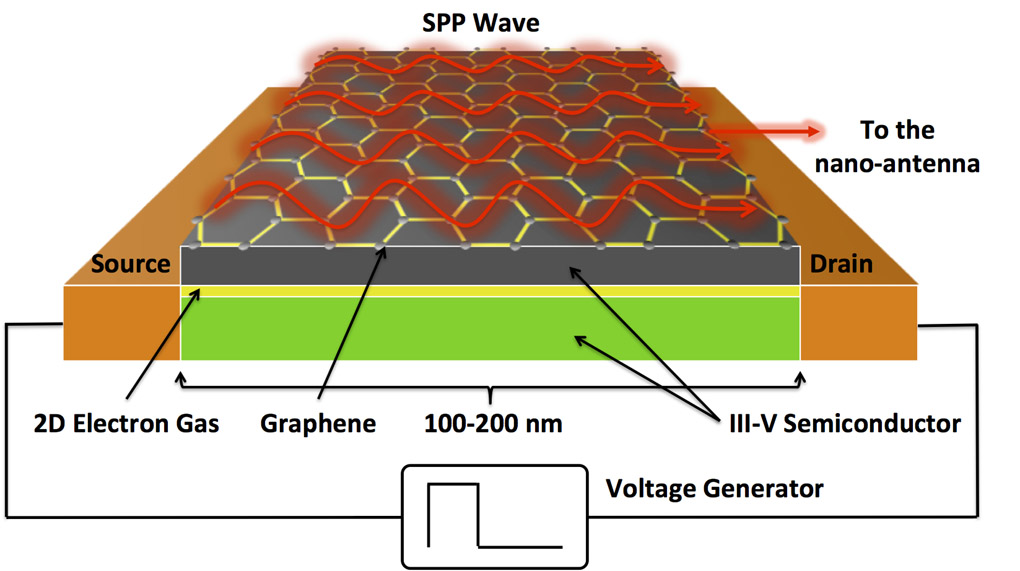 In addition to the challenges of miniaturizing the device, enabling communication among nanodevices requires the development of new terahertz band channel models, novel physical layer solutions (e.g., information coding and modulation techniques), as well as networking protocols tailored to the peculiarities of nanonetworks. We have been working on these challenges for the last five years10 and validated the performance of our solutions by simulation tools. We are now set to fabricate the proposed nanoantennas and nanotransceivers, implement our software solutions, and show the first physical prototypes within the next two years.

This work was supported by the US National Science Foundation (CCF-1349828).

Ian F. Akyildiz received his BS, MS, and PhD in computer engineering from the University of Erlangen-Nurnberg, Germany, in 1978, 1981, and 1984, respectively. He is the Ken Byers Chair Professor in Telecommunications.

Josep Miquel Jornet received his PhD in electrical and computer engineering from the Georgia Institute of Technology in 2013. He is currently an assistant professor.