Solar power production and solar energy storage are important technologies on the road toward obtaining a sustainable society, independent of access to fossil fuels. To achieve this goal, challenges must be overcome regarding intermittency (the inherent changeability in the supply of solar energy) and load leveling (the variability in consumer demand for electricity). As a consequence, technologies for solar energy storage in the form of latent electrical power (voltaics) and energy-rich chemical bonds (solar fuels) are becoming increasingly important.

Solar energy reaches the earth in quanta known as photons, which can then be converted into useful energy. Although photons from solar irradiation vary in intensity, from the UV to the near-IR, the desired chemical transformations in solar fuels typically require high-energy photons. Since the requisite UV photons account for less than 10% of the total solar spectrum, this presents a problem for the overall efficiency of practical devices.

A process known as triplet-triplet annihilation (TTA) photon up-conversion provides a possible strategy toward circumventing this issue. A material capable of performing TTA can combine two low-energy photons to form one with high energy via annihilation.1–4 In a typical system, a triplet sensitizer molecule is excited by the absorption of solar light. This excited sensitizer then transfers its triplet energy to an annihilator molecule, also in a triplet state. At a sufficient intensity of irradiation, it becomes likely that two excited annihilator molecules will combine, emitting excess energy in the form of a high-energy photon. Lower-energy photons are thereby converted to higher-energy photons that can be used to drive solar fuels. TTA has traditionally required laser light and strict oxygen-free conditions to work efficiently, but the process was recently demonstrated even under lighting conditions analogous to natural sunlight.1, 2 Furthermore, new systems have been developed that operate in the presence of oxygen.5

We have fabricated a device that employs TTA photon up-conversion to increase the energy absorbed by a molecular solar thermal fluid. This fluid undergoes a molecular transition (isomerization) when photons are absorbed, enabling chemical energy storage. An example of an energy storage system based on this process can be seen in Figure 1.6–8 In a practical device, either thermal energy or a catalyst is then used to initiate the energy-releasing reaction when required.7 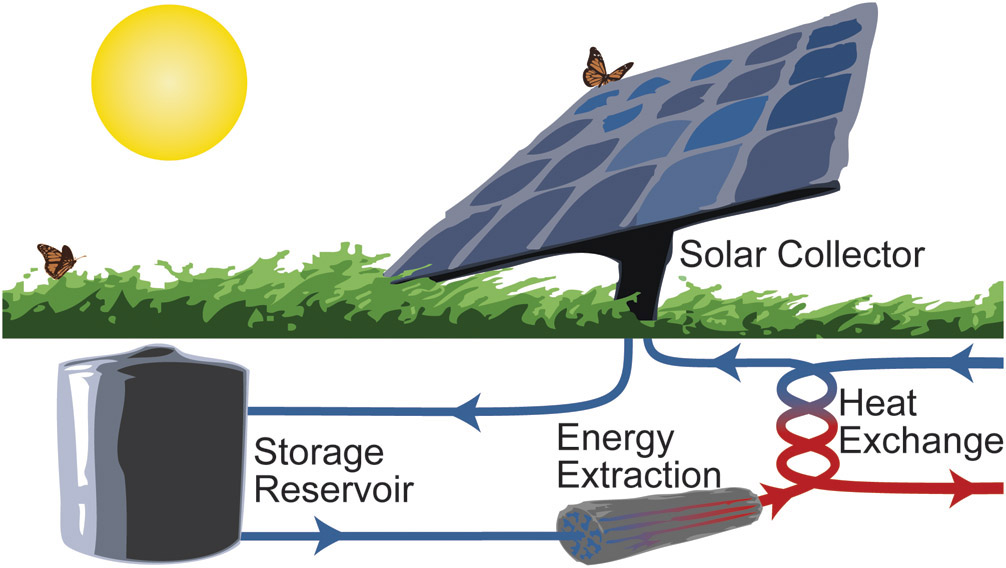 Without photon up-conversion, the process has a maximal efficiency of about 10%. One of the limiting factors is the small fraction of UV photons in the solar spectrum,6 since the photochemical reaction typically requires photons with UV wavelengths (less than 450nm) to occur.8 The molecular system absorbs photons at these wavelengths, but is transparent to lower-frequency photons. Our device, shown in Figure 2(a), consists of a top layer that filters out UV light from the solar spectrum, allowing truncated white light through. The subsequent layers are fabricated using quartz glass, into which channels have been sintered to create microfluidic systems. The molecular solar thermal fluid—bis-(1,1-dimethyl-tridecanyl)-fulvalene-dirutheniumtetracarbonyl—is pumped through the second layer of the device. Long-wavelength photons are transmitted through this layer and into a third, containing a solution made up of sensitizer and annihilator molecules—2,3,7,8,12,13,17,18-octaethyl-21H,23H-porphine palladium(II) and 9,10-diphenylanthracene, respectively—dissolved in toluene,1, 2 which facilitate TTA. The photons are up-converted and transmitted back to the second layer of the device as high-energy photons, which in turn drive the photochemical energy storage reaction. This technique leads to a considerable increase in the conversion percentage: see Figure 2(b). 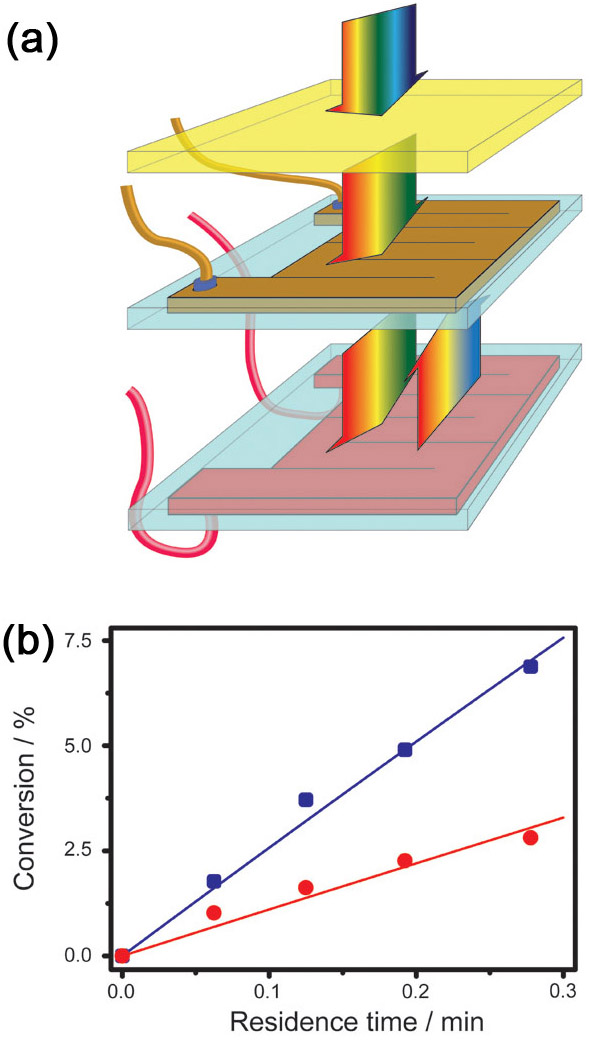 Figure 2. (a) Device employing photon up-conversion for solar energy storage. The upper (first) layer filters out UV light. The second layer consists of a microfluidic system sintered into quartz glass, through which a molecular solar thermal fluid is pumped. The microfluidic system of the third layer contains a molecular solution capable of performing triplet-triplet annihilation (TTA). Light that is not energetic enough to be absorbed by the second layer passes through to the third, where it can be up-converted and transferred back. (b) Solar energy conversion as a function of residence time with (blue) and without (red) photon up-conversion.4 (Reproduced with permission from the Royal Society of Chemistry.)

Karl Börjesson is currently working as a postdoctoral researcher. His research interests span the design, synthesis, and photophysical evaluation of both photochromic molecules and energy-transfer complexes, as well as the incorporation of such systems into practical devices.

Damir Dzebo is a PhD candidate under Bo Albinsson. His work focuses on the characterization and optimization of TTA up-conversion systems with the use of a wide range of optical spectroscopic methods.

Bo Albinsson is a professor. He has a long-standing interest in mechanisms of energy and electron transfer reactions, with relevance for solar energy research. He has also recently developed DNA nanostructures functionalized with photoactive molecules and has a broad interest in advanced optical spectroscopic methods.

Kasper Moth-Poulsen is an assistant professor. He currently works in the design of new self-assembled materials, with the goal of fabricating materials from nanoparticles, nanorods, and tailor-made small molecules for a number of applications, ranging from single-molecule electronics to sensors and renewable energy.