Fiber laser sources have become one of the most popular and rapidly developed laser technologies over the past decade. The main reason for this is that fiber lasers present several key advantages over bulk solid-state lasers, including good heat-dissipation handling, high gain, ease of alignment, and single-mode wave guiding.1 However, for applications that require high peak power with good beam quality, these lasers cannot yet offer a good alternative due to material damage and deleterious nonlinear effects. These limiting factors arise from the very high powers within the relatively small core of the fiber. To overcome these limitations and increase peak power, it is possible to either increase the effective single-mode area of the core, or to coherently combine several fiber laser sources.

To increase the effective area of a core, we can use large mode area step-index fibers,2 photonic-crystal fibers (PCFs),3 or chirally coupled core fibers.4 However, even with these large core fibers, the output peak power is eventually limited. The second approach consists of combining several ‘independent’ lasers (or amplifiers) into a single coherent output, while preserving the beam quality. To do this, the relative phases of the combined lasers should be locked, either by active or passive locking. Active techniques work by dynamically and continuously adjusting the phase of each independent laser source by means of electronic feedback loops.5 Passive techniques, on the other hand, consist in having the independent laser sources self-phase-locked by means of a passive coupling mechanism.6–9 Passive techniques tend to be limited in terms of the maximum number of combined laser channels,10 but they are simpler and more robust in comparison with the active techniques, which require smart and fast electronic loops and algorithms.

It is also possible to increase the peak power of fiber lasers by simultaneously exploiting both approaches by coherently combining very large single-mode PCFs. We recently reported on the experimental investigation of high-peak-power, passive-interferometric coherent combining of two PCF laser channels within a common Q-switched cavity: see Figure 1.11,12 We formed the resonator using two commercially available active fibers (55cm-long, double-clad, ytterbium-doped, single-mode, rod-type PCFs), an acousto-optic Q-switch, a common highly reflective broadband rear mirror, a partially reflective output coupler (OC) with 4% reflectivity, and two 30W fiber-coupled pump diodes. Furthermore, to use the same Q-switch for both channels, we employed a right-angle, highly reflective broadband-coated prism to bring the two beams close to each other without any overlap between them. Thus, our system simultaneously Q-switches both channels, with the phase relation being determined only by the interference conditions on the beam splitter.

To enable intracavity interferometric coherent combining between the channels, the resonator includes an unpolarized 50% beam splitter, and the OC is common for both channels. Due to the intracavity mode competition, the system chooses the lowest loss state with zero output from the interferometric loss channel. This state means that there is constructive interference at the beam splitter output that provides feedback to the cavity (directed toward the OC), and destructive interference at the beam splitter loss output, which does not contribute to the intracavity circulating energy.8,13

In Figure 2, we show the measured output characteristics of the coherently combined system in Q-switched pulsed operation at different repetition rates. The maximum output power is 21 and 6W in the cases of 100 and 1kHz, respectively. Figure 3 shows the results of measured pulse energy and pulse duration as a function of the launched pump power, in the case of 1kHz repetition rate. The maximum value of pulse energy is 7.2mJ with a pulse duration of ∼10ns, corresponding to a peak power of ∼0.7MW (peak intensity of ∼15GW/cm2 in each fiber core). The beam quality measurement, at the highest peak power, reveals near-diffraction-limited operation of the system (M2 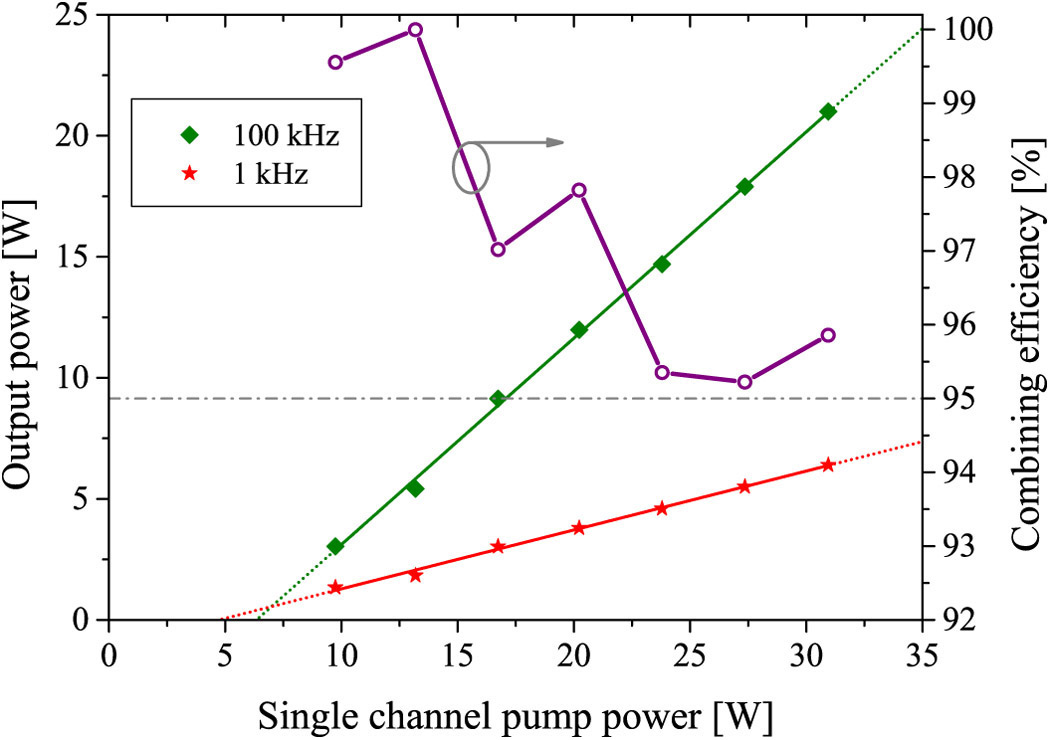 Figure 2. Measured coherently combined laser output power as a function of single-channel-launched pump power at different repetition rates (lines represent the linear fit). The green squares and red stars correspond to the left y-axis and represent repetition rates of 100 and 1kHz, respectively. The purple circles correspond to the right y-axis, as indicated by the gray arrow, and represent the combining efficiency as a function of launched pump power. 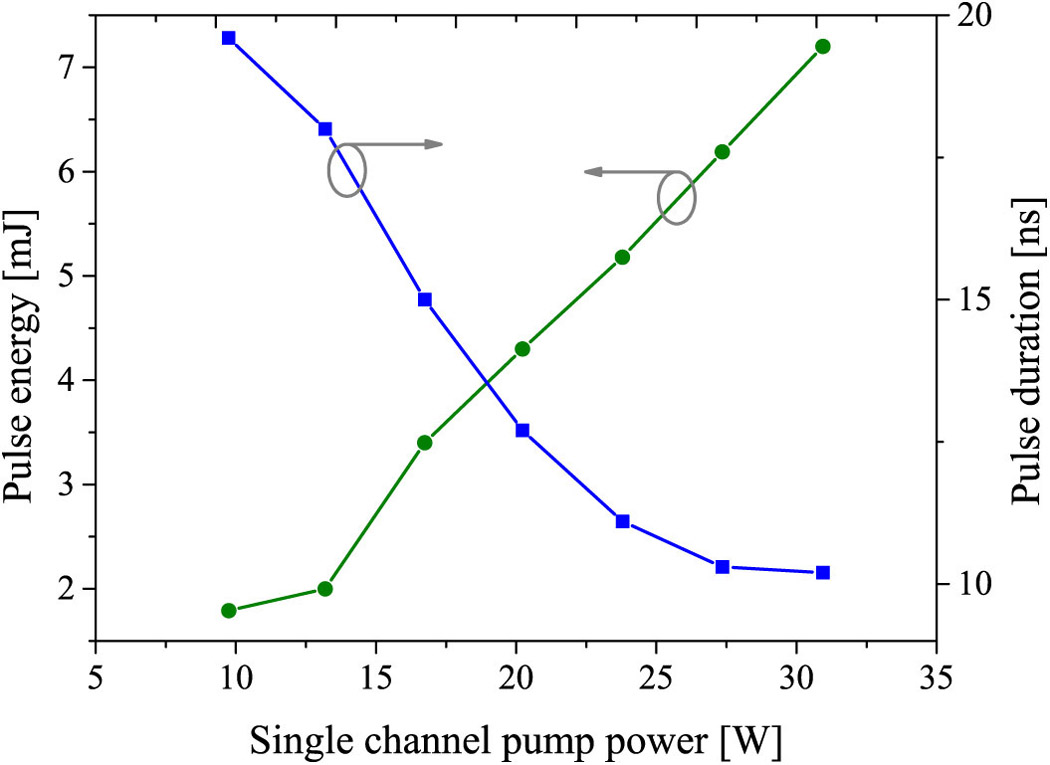 Figure 3. Measured pulse energy (green) and pulse duration (blue) as a function of single-channel-launched pump power from the coherently combined laser system at 1kHz repetition rate. The gray arrows indicate which y-axis corresponds to each measurement.

According to these results, we believe that coherently combined pulsed PCF lasers (two or more) can lead to record-high peak power fiber lasers with excellent beam quality. In the future, these lasers could replace bulk solid-state lasers in various applications, such as material processing, light detection and ranging, and medical procedures. In the future, we plan to increase the number of combined laser channels and the output peak power from each channel (up to 2MW, which is very close to the self-focusing limit in silica).