During NASA space missions, the physical condition of astronauts must be monitored in real time, either onboard or from Earth, and the collected data must be analyzed and interpreted. In-flight sensors for astronaut healthcare monitoring must be near-real time, minimally invasive, highly sensitive, and easily repairable or replaceable. The system must also enjoy gravity-independent functionality, compact size, low power consumption, minimal human interaction, and efficient temperature control.

In our work, we have proposed the design of an automated system for onboard use to monitor the crew's physiological signals. Ultra-wideband (UWB) wireless biodetectors can be placed either on or underneath the astronauts' suits, eliminating the need for sensor-to-skin contact to collect data about respiration and heart rate. This is more comfortable for the astronauts because they do not have to wear a specific garment or connect to another recording device for a long time to have their vital signs monitored.

Measuring respiration, heart rate, and metabolic rates that would include such feedback as pH and oxygen levels in the blood, the system would transfer the data to an onboard ‘smart’ integrated circuit for analysis and further action. A smart circuit can automatically perform and control monitoring using a cognitive system that acts like a healthcare expert. If it detects an abnormality, the system will run a diagnostic procedure and suggest preliminary medical treatments to be administered by a fellow crew member.

Reconfigurability—in voltage, bandwidth, and precision—in the front-end circuits is necessary to provide a broad range of physiological signals, which vary by different orders of magnitude in frequency and amplitude. Our adaptive system is designed to run firmware updates, system software attestation, and event-triggered task partitioning between biosensors and controlling parts. Firmware is a certain form of software programmed into read-only memory (ROM) and is responsible for the general functionality of a system or device when the system is first switched on.

To obtain metabolic rates, the system uses near-IR (NIR) biosensors. NIR spectroscopy gathers information from arterioles (small-diameter blood vessels that branch out from an artery and lead to capillaries) and other sites on the body that lie underneath the biosensors. The system makes broad use of nonpulsatile NIR spectroscopy to gather information about tissue oxygen saturation (SO2) and muscular pH using predetermined methods that are sensitive to changes in hemoglobin. The biosensor can discriminate between the spectral signal of muscle tissue from that of fat and skin tissues to calculate muscle SO2.

In 2007, an Italian research team1 published the results of its feasibility study of the UWB pulse radar system by means of theoretical and computer-aided design analyses. We consulted their results to help develop our proposed method and chose the operation frequency of the UWB detectors within a 3.1–10.6GHz range.2 The UWB detector (see Figure 1) sends short electromagnetic pulses—the duration of which is around 200–300 picoseconds—toward the heart, with a pulse repetition frequency in the range of 1–10MHz. As the heart muscle and the blood inside the heart have different characteristic impedances, a part of the energy transmitted is reflected at the interface between the two media.3–5 To measure the loss of the electromagnetic radiation through the human chest over the UWB band (3.1–10.6GHz), the UWB antenna generates pulses at different frequencies in the desired spectrum range. 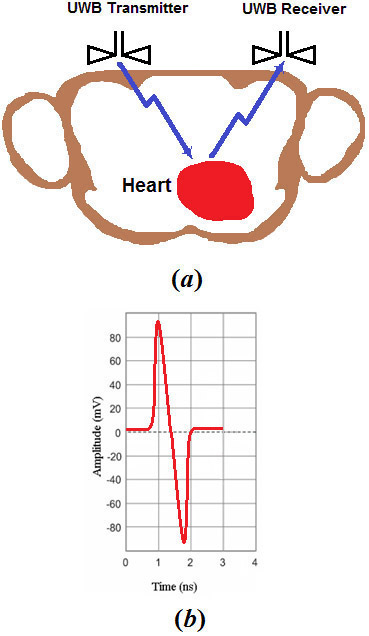 Figure 1. (a) Ultra-wideband (UWB) detectors transmitting and receiving waves to and from the heart via a series of single UWB pulses. (b) A single UWB pulse. mV: Millivolts. ns: Nanoseconds.

Monitoring astronauts' vital signs during deep-space flights is critical for their health, and our proposed design for a wireless, automated, smart system accomplishes this in a nonintrusive way. In the presence of abnormal readings, the system is capable of making preliminary diagnoses and suggesting in-flight treatment options to be administered by a crew member. Our next steps will be to implement a design-based platform for simulated testing followed by actual use in space. If the system performs as expected, we hope to use it to improve clinical services in homecare or mobile patient monitoring.

Ershad Sharifahmadian received his MSc in biomedical engineering in 2009 and his PhD in electrical engineering in 2014. He has been awarded several research and travel grants from the Defense Threat Reduction Agency and the National Science Foundation. He has also received certificates of merit from IEEE, the Engineering in Medicine and Biology Society, and the International Conference on Biomedical Engineering.

Yoonsuk Choi is a PhD candidate in the Department of Electrical and Computer Engineering. He worked many years as a research engineer at the Korea Institute of Science and Technology; LIG Nex1, a South Korean aerospace and defense company that was involved in missile research and development; and the Institute of Quantum Information Processing and Systems at the University of Seoul. His research interests include image fusion methods, hyperspectral and multispectral imaging analysis, and multidimensional signal processing.

Shahram Latifi received his MSc in electrical engineering in 1980 and his PhD in 1989. He is currently a professor of electrical engineering, an IEEE fellow, and the director of the Center for Information and Communications Technology. He is the author of over 200 technical articles in the areas of image processing, biosurveillance, biometrics, document analysis, computer networks, fault-tolerant computing, parallel processing, and data compression.