The InfraRed Array Camera (IRAC) is one of three instruments on the Spitzer Space Telescope, which is part of NASA's Great Observatories program.1, 2 Since August 2003, the IRAC instrument has been used to make astronomical observations in the 3–8μm wavelength range. In the past, it has been difficult to calibrate IR photometers to better than 5% because of uncertainties associated with the primary calibrators and the temperature stability of the detectors.

Through a combination of novel design and careful analysis, it has been possible to calibrate the IRAC instrument to an absolute photometric accuracy of 2.5%.3 The exquisite stability of IRAC, which is due to millikelvin thermal control of the detectors together with a detailed understanding of the instrument's systematics, has enabled several Spitzer discoveries. These findings include a precise (<3% error) determination of the Hubble constant,4 mass measurements of the highest redshift galaxies yet discovered,5 measurements of weather patterns on brown dwarf planets,6 and the first measurement of an exoplanet's longitudinal temperature profile.7

We have been able to achieve the high precision of IRAC by analyzing more than nine years of in-flight data. We identified and corrected instrumental systematics in the photometry measurements, which enabled precisions of 1) and warm (ongoing since 2009) missions. Most of the uncertainties that remain in our final calibration of IRAC are due to limitations in our knowledge of the fundamental IR flux calibrator used (the star Vega). 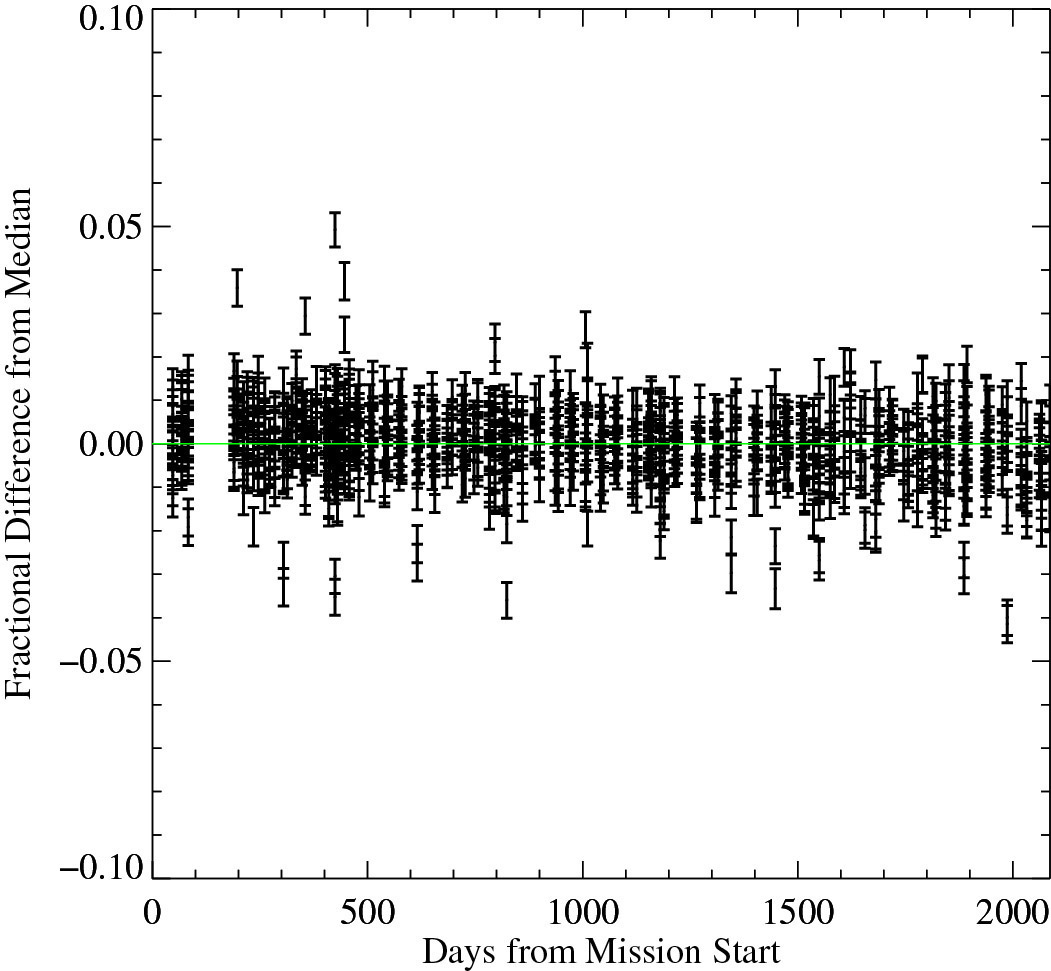 Figure 1. Photometric stability of the InfraRed Array Camera (IRAC). Measurements of a primary calibrator for the instrument were made throughout the cryogenic mission, at a wavelength of 3.6μm.

The flux from a network of observed calibration objects is measured in units of 'data numbers per second.' We perform the absolute calibration for IRAC by determining a scaling factor that converts these to physical units—janskys (Jy)—of flux density. There are, however, two main complications with this procedure. First, we have to correct for the instrumental photometry systematic effects that the measured fluxes contain, and second, our knowledge of the flux densities of the calibrator sources is imperfect. So that our calibration is robust to uncertainties in photometric truth, we find average values from two different kinds of calibration sources (stars with A0V and KIII spectral types), and observe several stars of each type. We are able to predict the IRAC flux densities for both sets of calibration objects by integrating models of the stellar spectra with the system response for each of the instrument's four detectors. We use near-IR (2MASS, the Two Micron All Sky Survey8) and mid-IR (MSX, the Midcourse Space Experiment9) photometry measurements to normalize our predictions to the stellar models. The MSX photometry, in particular, provides an important reference to standards set by the National Institute of Standards and Technology (NIST) and makes our calibration less dependent on the IR flux density of Vega.

The photometric values measured by IRAC vary (by a few percent) with position on the detectors, due to the different path lengths of light passing through the broadband filters.10 We model this photometric variation using a 2nd-order polynomial in x- and y-pixel coordinates. For the short-wavelength (indium antimonide) arrays, the photometry also varies at the few-percent level as a function of source position relative to the center of a pixel (see Figure 2). This effect arises due to undersampling combined with intra-pixel gain variation of the detectors. This variation can be modeled as a 2D Gaussian curve and we can almost completely remove the effects (see Figure 3). 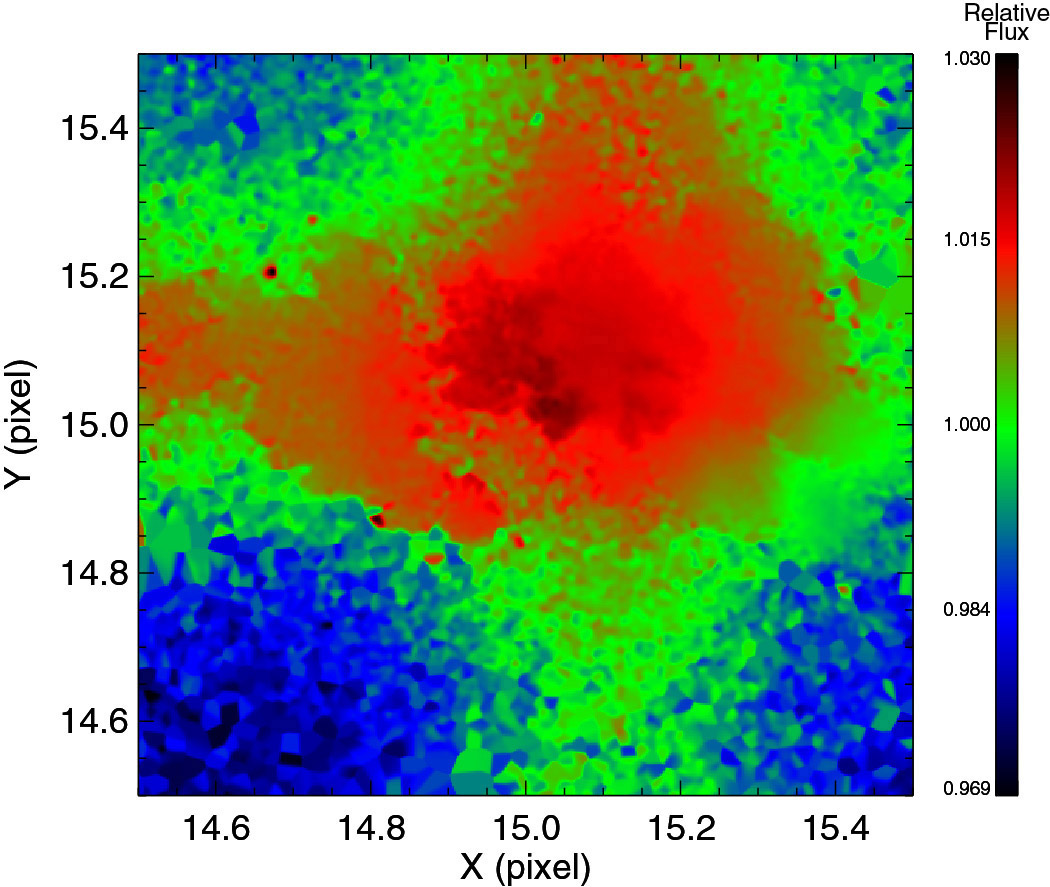 Figure 2. High-precision intra-pixel gain map for an IRAC detector at 4.5μm. This map has been used for the analysis of exoplanet observations during the warm mission.11 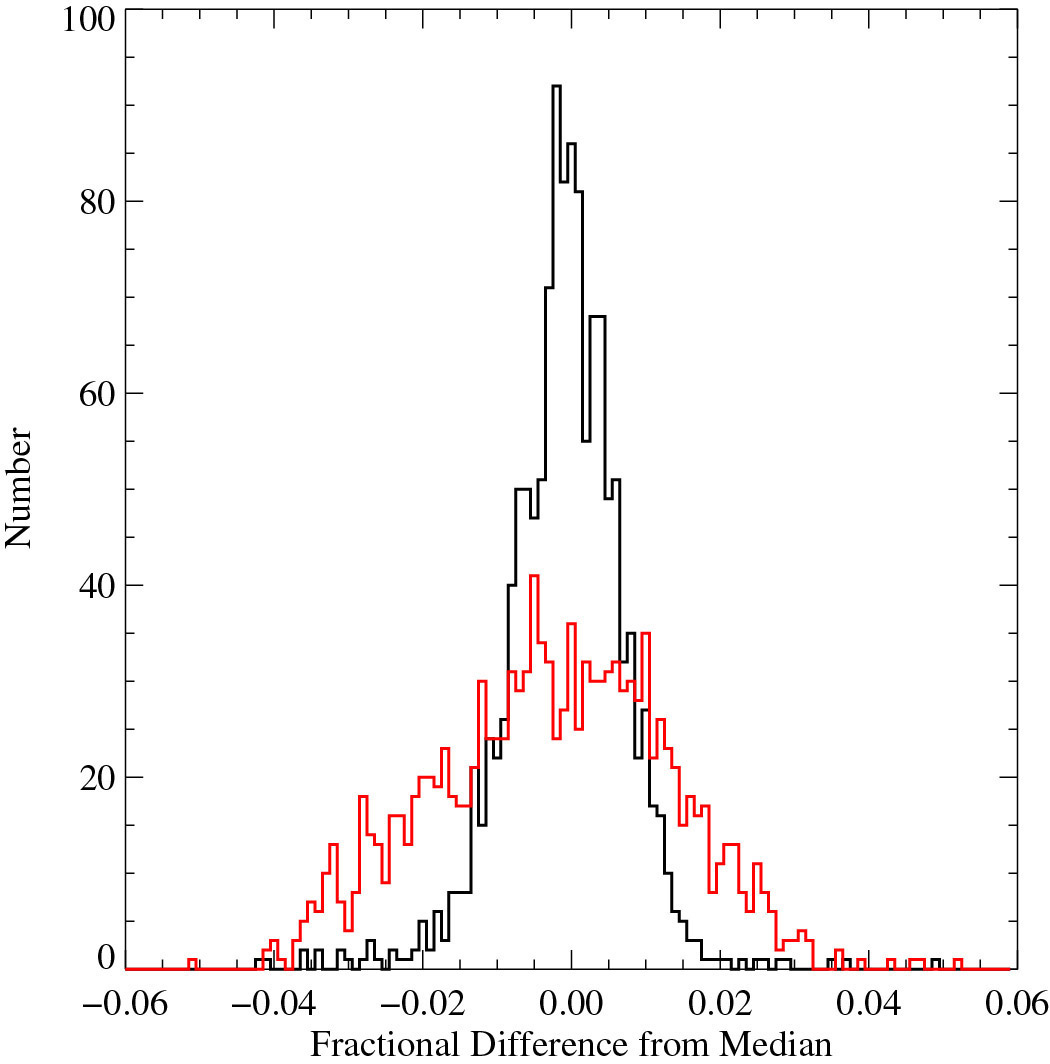 Figure 3. Distribution of photometry measurements at a wavelength of 3.6μm for a calibration star. The data are shown with (black) and without (red) photometric corrections.

Our resulting photometry is extremely precise and the remaining uncertainties are dominated by the bias between the A0V and KIII standards (0.5–1.8%) and by the accuracy of the fundamental calibration standard Vega (1.5%). To verify our results, we made observations of Hubble Space Telescope (HST) calibration standards.12 We compare our measured flux densities with those from the independently derived HST calibration. The two calibration methods agree to better than 1%, which indicates that the formal errors we quote are conservative.

We have achieved an absolute calibration of <2.5% for IRAC on the Spitzer Space Telescope, which suggests that accuracies approaching 1% in the IR are possible. Such accuracy will permit the dark energy equation of state to be measured, using type Ia supernovae.13 Upcoming measurements using a NIST-calibrated spectrophotometric telescope14 will potentially reduce the 1.5% uncertainty in our fundamental calibration. Our continuing cross-calibration efforts between HST and Spitzer, which include recent observations of Vega and Sirius, will help resolve the fundamental IR calibration uncertainty.

We thank all our colleagues on the IRAC support teams for maintaining and characterizing the instrument, as well as the mission operations teams at the Spitzer Science Center, Jet Propulsion Laboratory (JPL), and Lockheed Martin. We are also grateful for the calibration work conducted at NIST and the Space Telescope Science Institute. Support for this work was provided by NASA through an award issued by JPL/California Institute of Technology.

Sean Carey heads the instrument support team for the IR Array Camera (IRAC) at the SSC.

James Ingalls is a member of the IRAC instrument support team and is an expert in high-precision photometry.

Joseph Hora is the project scientist for the Spitzer Space Telescope's IRAC instrument.