Fossil fuels are the most highly used sources for energy generation. But as energy needs increase day by day, and fossil fuels are consumed at ever faster rates, there is a great need for alternative energy sources. Renewable sources such as wind and solar can be exploited in a wide range of geographical areas and could effectively replace fossil fuels. For example, the Earth receives over 8 million quads of BTU (British thermal units) annually, meaning that there is enough solar energy available to fulfill all the energy requirements of the human race. However, due to the low efficiencies with which current solar cell technologies convert light into electricity, only a small fraction of the available solar energy can be harnessed. Deployment of solar cells will increase if their efficiency can be improved without increasing their cost. A novel concept known as the intermediate band solar cell (IBSC) paves the way for increasing solar cell efficiency.1 In an IBSC, sub-bandgap photons that would be wasted in a conventional solar cell can be harvested effectively to create a higher photocurrent.

Semiconductor quantum dots (QDs) are perhaps the best choice to create an intermediate band in a single-junction solar cell due to the inherent tunability of their shape, size, and quantum confinement properties. For an IBSC to work, the QD system being used must satisfy certain conditions in terms of bandgaps and band alignments. For maximum efficiency, the QD and host material bandgaps should be 0.7 and 1.93eV, respectively.

There have been numerous attempts to use established QD systems for IBSCs, including indium gallium arsenide/gallium arsenide—In(Ga)As:GaAs)—gallium antimonide/gallium arsenide (GaSb:GaAs), and indium arsenide/gallium arsenide nitride (InAs:GaAsN).2–6 However, these QD systems have had only limited success because their band alignments do not meet the requirements. In contrast, a novel QD system consisting of InAs(Sb) QDs within aluminum arsenide/antimonide barriers (with the composition AlAs0.56Sb0.44) on indium phosphide (InP) substrates was identified by Levy and colleagues as being well suited to IBSCs.7 Nearly ideal bandgaps are available for these QD and host materials. Furthermore, InAs(Sb)/AlAsSb QDs have type II band alignment, where one of the carriers is delocalized. This offers strong electron confinement, while the valence band (VB) offset at the InAs(Sb)/AlAsSb interface is small (zero for certain As and Sb compositions). These properties are essential for high-efficiency IBSCs. To our knowledge there have been no previous reports of growth of InAs(Sb) QDs on AlAsSb.

We have successfully developed a process for synthesizing high-quality InAs QDs within an AlAsSb matrix. Our study indicates that inserting very thin layers of GaAs and GaAsSb immediately below and above the QDs (see Figure 1), produces dots with better morphology and improved optical quality.8 Figure 2 shows an atomic force microscopy image of InAs/AlAsSb QDs, with a cladding layer five monolayers thick of GaAs below the InAs QDs. These QDs have an areal density 2×1010cm−2 and are 4.1nm tall and 33nm in diameter. We can readily control the average size of our QDs, and hence the energies of the quantum confined states, simply by changing the InAs coverage. Power-dependent photoluminescence measurements on these QD samples confirm a type II band alignment. In samples containing GaAs/InAs/GaAsSb QDs, we have measured carrier lifetimes as long as 7ns, which is greater than the lifetimes measured in typical type I QD systems, where there is no spatial separation between conduction band electrons and valence band holes. These longer lifetimes are especially beneficial for efficient carrier extraction, leading to higher IBSC efficiency. 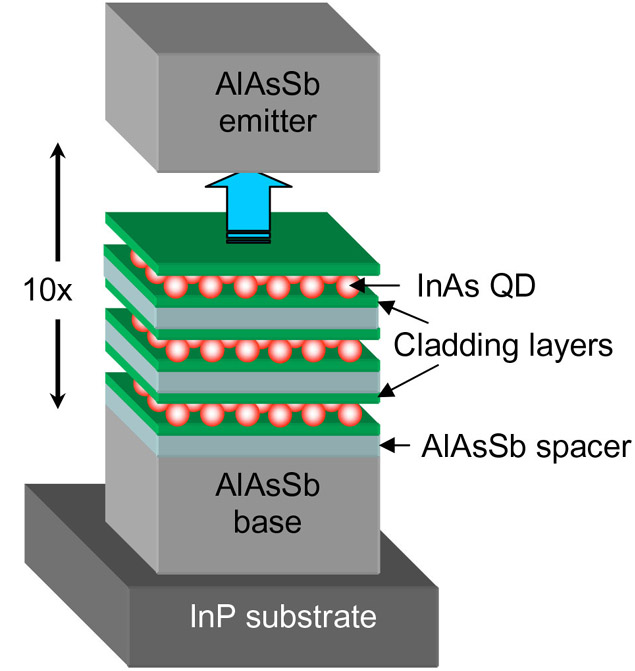 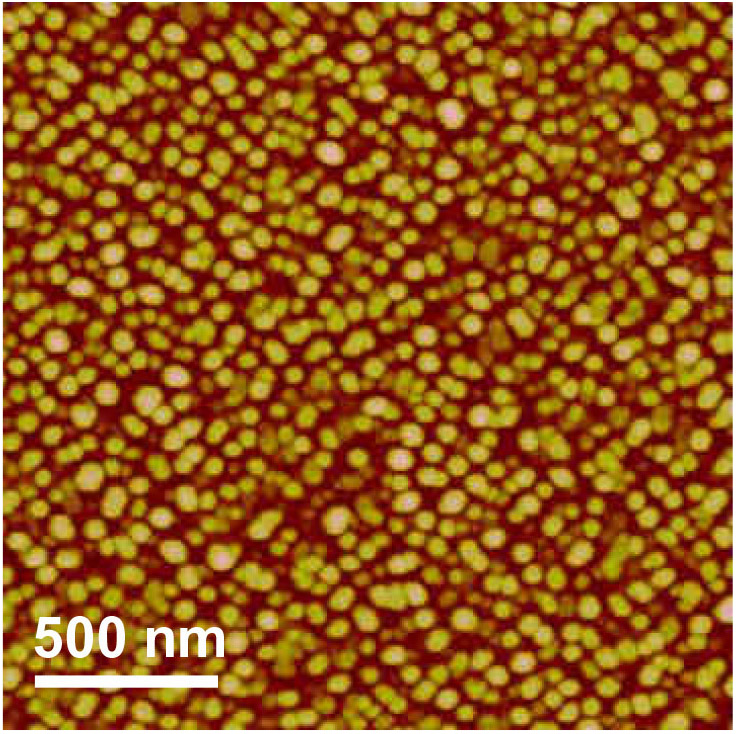 Figure 2. Atomic force microscopy image of InAs QDs on AlAs0.56Sb0.44 with a five-monolayer-thick GaAs cladding layer placed beneath the QDs. The QD density is 2×1010cm−2, and they are 4.1nm tall and 33nm in diameter.

To understand the performance and operation of QD IBSCs, we have designed an AlAsSb p-i-n solar cell device with 10 layers of InAs QDs buried within the optimized cladding layers: see the schematic in Figure 1. Though the QD cell shows lower short-circuit current (ISC) and open-circuit voltage (VOC) when compared to a control cell without QDs, we obtained very exciting results when we conducted external quantum efficiency (EQE) measurements. The QD cell shows an extremely broad-band photoresponse up to 1800nm, which is the longest wavelength ever reported for an IBSC.

In an IBSC, there are three optical transitions: one directly from VB to conduction band (CB), and the two transitions from VB to intermediate band (IB) and from IB to CB, via which the sub-bandgap photons are collected. These three transitions can be observed by a two-photon experiment in which an additional IR source with carefully tuned photon energy is used to pump electrons either from VB to IB or from IB to CB. If an IB exists, one would expect to see increased quantum efficiency when the IR light source is switched on. Our experimental results are shown in Figure 3. The y-axis shows ΔEQE, the difference between EQE values with and without the IR source. The positive value of ΔEQE indicates that use of the IR source increases carrier extraction, therefore confirming sequential absorption via IB. 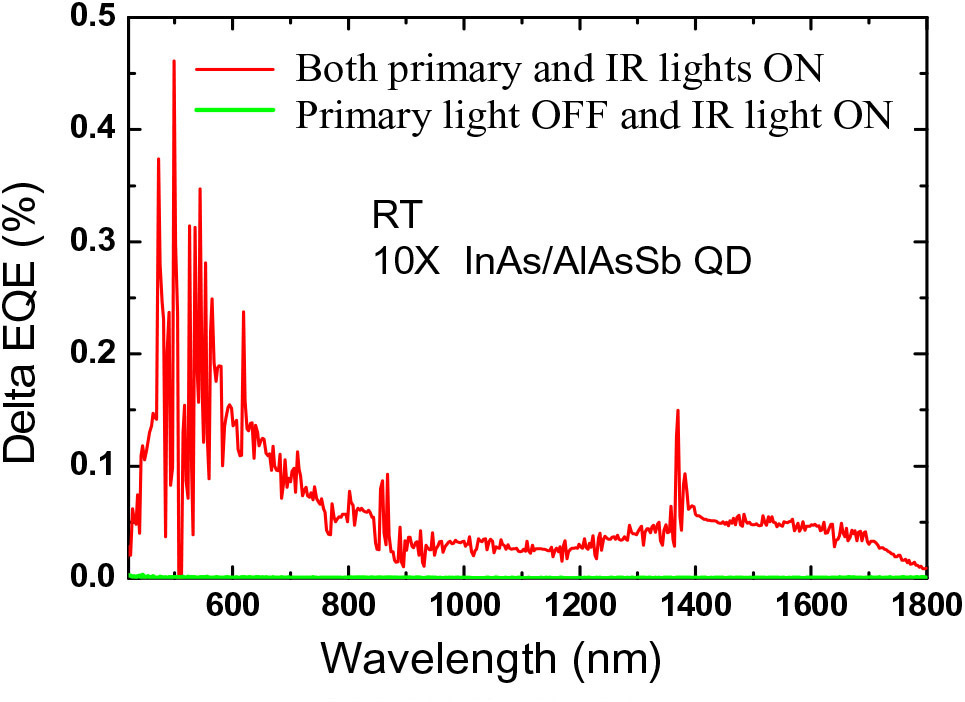 In conclusion, our results from these novel InAs/AlAsSb QDs prove the validity of the IBSC approach, and underline the potential of this material system for developing high-efficiency IBSCs. Efforts are already under way to optimize our QDs and the design of the IBSC structure to increase the efficiency of these exciting new solar cells.

The authors would like to thank the Department of Energy and Air Force Research Laboratories for their financial support.