The development of high-efficiency, low-cost photovoltaics is crucial to ensuring wider adoption and deeper penetration of solar into the current energy portfolio. Silicon is the second-most abundant element on Earth, and silicon solar cells account for nearly 90% of 2012 sales of photovoltaic products. Recent device advances pushed the power conversion efficiency up to 17% at the solar panel level. Nevertheless, widespread use of photovoltaics for electricity generation is still hampered by a ‘dollar-per-Watt’ cost that is not competitive with electricity generated from gas-fired power stations.

Semiconductor nanopillars represent a viable solution to reduce the active material volume while maximizing the optical absorption with respect to planar architectures. In periodic, vertically aligned arrays of nanopillars, the incident optical field interacts with subwavelength structures to exploit a principle known as resonant trapping, which enhances the optical absorption. The nanopillars waveguide the light within the array, while also recycling photons and giving them a further chance of absorption by allowing them to bounce within the array several times before being reflected back into the open space. These effects can be achieved with a fairly low density: the nanopillars only cover a small percentage (5–15%) of the surface area. Figure 1(a) shows a typical nanopillar array grown by means of metal-organic chemical vapor deposition. This method creates a graded effective refractive index between air and the solar cell, which in turn improves the absorption. The effect of geometrical tuning (varying the pitch) of the array on the photon absorption properties is depicted in Figure 1(b) and (c).1 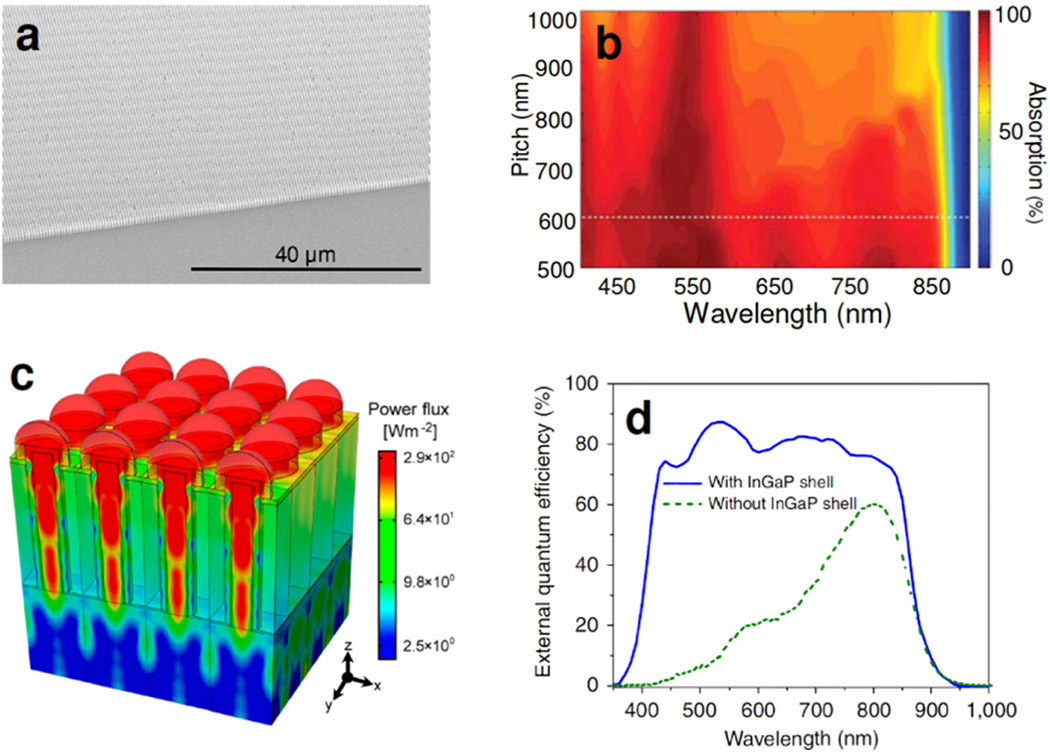 Figure 1. Nanopillar-based next-generation photovoltaics. (a) Typical periodic array of nanopillars arranged in a square lattice repetition. Each nanopillar is 1.5μm high and 200nm in diameter. The array can be scaled up to 4-inch wafer size with inexpensive lithographic techniques (with deep-ultraviolet lithography). (b) Wavelength-dependent optical absorption calculated using finite-difference time-domain simulations. Red indicates absorption approaching 100%, and blue corresponds to low absorption (outside of the bandgap). The optical absorption can be maximized by varying the distance (pitch) between adjacent nanopillars. (c) Integrated solar-spectrum optical power flux within the periodic structure. The optical power in the active nanopillar region is maximized, increasing the photocurrent output from the solar cell. (d) External quantum efficiency (EQE) measurements of processed nanopillar solar-cell devices with (solid blue line) and without (dashed green line) wide-bandgap in situ passivation. Controlling the atomic structure of the material is crucial to approach an EQE of 100%, which signifies that for each photon, one electron is extracted at the electrodes. InGaP: Indium gallium phosphide.

Enhanced photon trapping can be achieved with about 1/10 of the semiconductor material generally used for an equivalent thin-film design.1 An advantage of using nanopillar-based photovoltaics is that the junction can be engineered by modifying the geometry. Planar junctions, as used in standard solar cells, have properties tied to the thickness, concentrations, and materials of the doped layers. The junction is dictated by the 2D geometry of the device.

In our approach, we are able to tune the junction geometry to a radial or an axial scheme. A radial geometry is beneficial to decouple the light field (vertical direction) from the carrier extraction (radial direction). This generally translates into higher photocurrent densities compared to canonical solar cells, as indicated by the external quantum efficiency measurements shown in Figure 1(d).2 An axial scheme is particularly advantageous to reduce the dark current density, since the junction area is limited to the cross-section of the nanopillar. Axial junctions result in higher open-circuit voltages. By combining these designs, it is possible to demonstrate higher efficiencies while reducing the amount of material used. Reducing the quantity of material required, achieved through design decisions such as junction choice and the smaller amount of material used in nanopillars, is in accordance with ecological considerations that drive our work. This also translates into a significantly lower ‘dollar-per-Watt’ figure.

Our research1 looked closely at recombination processes generated by surface states that massively hamper the device performance. We found that incorporating thin films of phosphorous-based wide-bandgap semiconductors into photovoltaics substantially decreases the dark current to sub-pA values for full arrays of nanopillars. In turn, the open-circuit voltage is increased above 0.92V, to date the highest reported for this class of photovoltaic devices.

Recently, we demonstrated nanopillar-array solar cells based on III-V alloys that reached power conversion efficiencies above 10%. This milestone result was achieved by means of a careful axial junction design within the semiconductor nanopillar, as well as an ad hoc, in situ passivation treatment, which rendered the nanopillars extremely stable over long periods of time. Combining high efficiencies with a considerable reduction of the active semiconductor volume is a major step toward a cost-effective renewable solution to the current energy demand.

We also used finite-difference time-domain modeling to analyze the dark diode characteristics of our cell with different passivation schemes. Our model revealed a minority carrier lifetime that depended on the wide-bandgap surface barrier capping the nanopillar facets. The lifetime increased from picoseconds to fractions of nanoseconds, resulting in power conversion efficiencies ranging from 2.65% to over 10%. Engineering the nanopillar surfaces with thin atomic layers of high-bandgap semiconductors is therefore essential to alleviate the effect of dangling bonds and surface charge on the final optoelectronic behavior of our devices.

In summary, nanopillar-array architectures offer a path for practical, large-area, scaled-up solar cells, which could challenge current designs of planar photovoltaics. These results lay the foundation for considerably higher efficiencies in III-V photovoltaics using nanopillars and multi-junction architectures, by means of a careful investigation of interfaces, surface-state density, and epitaxial growth of dissimilar materials. We next plan to integrate highly efficient nanopillar solar cells on top of current silicon photovoltaic devices to realize a hybrid tandem structure, combining the high absorption of III-V nanopillar arrays with the matured and low-cost silicon platform.

Giacomo Mariani is a recent PhD graduate and is continuing his work in the Department of Electrical Engineering. His research interests include material characterization, device integration, and large-area scalability applied to next-generation solar photovoltaics.