Fiber lasers find many applications in materials processing, including cutting, welding, drilling, and marking metal. To maximize their market penetration, it is necessary to increase their output power. Conventional fiber lasers—in which the gain medium consists of a single fused silica strand—can emit only about 1.2kW of power. They are limited by the physical properties of rare-earth-doped silica materials. We have developed single-crystal yttrium aluminum garnet (YAG) fibers, whose physical properties are superior to those of amorphous silica and which handle much higher output powers. These fibers enable a whole new array of applications, including materials processing and medical lasers.

There have been several approaches to the development of high-power (multi-kilowatt) lasers. Bulk single crystals are used extensively for their excellent thermal conductivity, efficiency, and mechanical resistance. However, heat dissipation becomes a problem in these systems at very high powers. A good remedy is to use fibers instead of bulk crystals. Ytterbium-doped glass fibers have demonstrated several kilowatts of continuous-wave output power with excellent efficiency.1 In fiber lasers, the pump is guided in a medium that is about 100μm in diameter, and the laser signal in a single-mode core (about 10μm). The low absorption of the pump is spread over a long length of fiber (around 1m), which makes the heat load dissipate better than in a bulk crystal, where the pump is absorbed over just a few millimeters. However, fiber lasers exhibit limited performance in pulsed regimes because high peak powers confined in a small core induce nonlinear effects that affect the quality of the laser beam. Our solution is to develop single-crystal fibers that act like a hybrid of glass fibers and bulk crystals (see Figure 1).2 Single fibers maintain all the advantages of bulk single crystals, such as thermal conductivity, efficiency, and mechanical resistance.

Our approach is to grow single-crystal doped YAG fibers by the laser-heated pedestal growth (LHPG) method (see Figure 2). A focused beam from a carbon dioxide (CO2) laser heats the tip of a sintered ceramic rod with the desired composition. A mechanical apparatus lowers a seed crystal with the chosen orientation into the molten zone, then pulls the resultant fiber from the melt. This technique enabled us to grow long, flexible, single-crystal fibers. 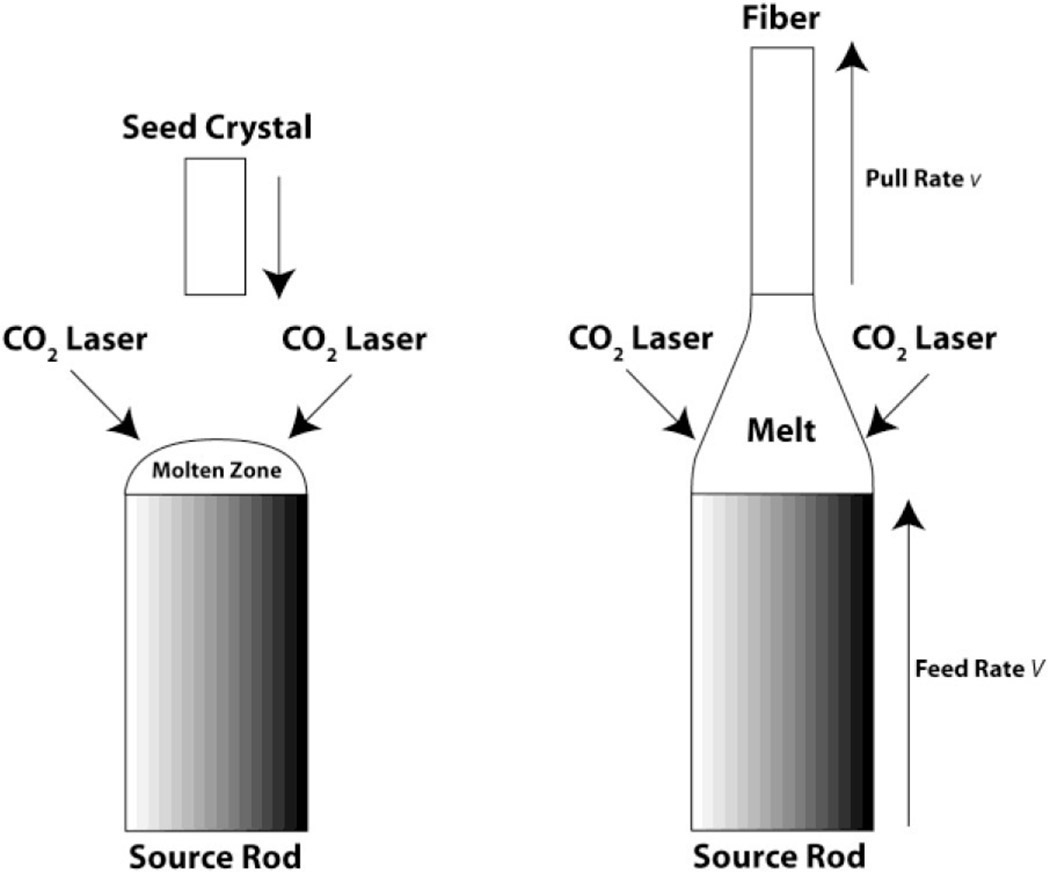 To fabricate single-crystal YAG fibers as laser gain media, the challenge was to synthesize a cladded flexible fiber with a core of dopant—erbium (Er), neodymium (Nd), or ytterbium (Yb)—that would exhibit good wave-guiding properties. Some dopants, such as Nd, spontaneously congregate at the center of the crystal during growth, creating a natural core of dopant in the crystal, while others (such as Er or Yb) do not. For those not spontaneously congregating at the core, we coated the as-grown fibers with polycrystalline YAG.

We grew single-crystal Nd:YAG fibers of up to 900mm in length. These fibers consisted of a doped core, 30μm in diameter, surrounded by an undoped YAG cladding with an outer diameter of 70–100μm. To clad doped single-crystal YAG fibers with polycrystalline YAG, we developed a new sol-gel process (a chemical process by which a solid compound is made from liquid precursors). We were then able to synthesize high-quality Er:YAG and Yb:YAG fibers with dopant concentrations as high as 10%. Finally, we used a closed-loop feedback system to improve control of sizing the fiber diameter, and reduced the maximum diameter fluctuations from 7% to less than 1% (see Figure 3). These developments enabled us to produce very high quality, low-scattering (as low as 0.1dB/m), flexible single-crystal fibers. Preliminary power handling experiments in our fibers show a damage threshold of 6MW/cm2 in continuous mode. We consider this result highly promising because the threshold for a bulk Nd:YAG crystal is about 1MW/cm2.

It is crucial for future generations of fiber lasers to overcome the limitations of glass to reach very high powers. Therefore, we have developed single-crystal fibers of doped YAG that act as a hybrid between bulk crystals and glass fibers. In this work, we grew 900mm-long and 30μm-diameter single-crystal strands with a variety of dopants. Preliminary results confirm the potential for such fibers to overcome the limitations of materials commonly used to fabricate lasers. The next steps for our technology will be lasing experiments using our cladded fibers in both continuous-wave and pulsed regimes, to enable proof of superior gain and efficiency.

Gisele Maxwell founded Shasta Crystals in 2006 for the commercial development of crystals grown by LHPG technology. Prior to this, she worked at Silicon Light Machines, and as an engineering manager at Crystal Technology Inc. She holds one patent, has published over 25 articles, and has co-authored two book chapters.