Optofluidic microlasers based on liquid droplet resonators for biophotonics

Liquid droplets are flexible and easy to produce, making them attractive as tunable light sources for a range of biologically relevant applications.
18 January 2014
Alper Kiraz, Mehdi Aas and Alexandr Jonáš

Optofluidic sources of laser light that can be integrated into lab-on-a-chip systems allow for dynamic control of laser resonator geometry and gain media, and open up new paradigms in biosensing.1 With their unique features, liquid droplets stand out among different optical resonator alternatives for developing optofluidic lasers. Thanks to their spherical geometry and smooth surface, droplet-based cavities host high-quality optical resonances called whispering gallery modes (WGMs).2 These low-loss resonant modes then allow droplet lasers to operate at low-threshold pump powers. Liquid droplets are easy to produce using aerosol generators in air or flow focusing or T-junction geometries in a microfluidic chip. Upon generation, droplets can be captured and manipulated using optical micromanipulation techniques such as optical tweezing or stretching. Their easily deformable nature makes them attractive for developing tunable optical components, e.g., tunable light sources. In addition, water-based droplet cavities are biologically compatible, allowing for the use of aqueous solutions of biologically relevant molecules as laser gain media.

Optical tweezing enables noninvasive confinement and manipulation of liquid droplets in air or another host fluid. Such optically trapped droplets containing a suitable gain medium can subsequently serve as movable active laser cavities. Using an experimental setup that combined an independent continuous trapping laser beam at 1064nm and a pulsed pump laser beam at 532nm at the focus of a high-numerical-aperture microscope objective, we were able to optically pump droplets that were simultaneously manipulated in three dimensions (see Figure 1). Thanks to the dye gain medium placed in the droplets, we observed dye lasing for two experimental configurations: glycerol/water droplets manipulated in air3 and immersion oil droplets manipulated in water.4 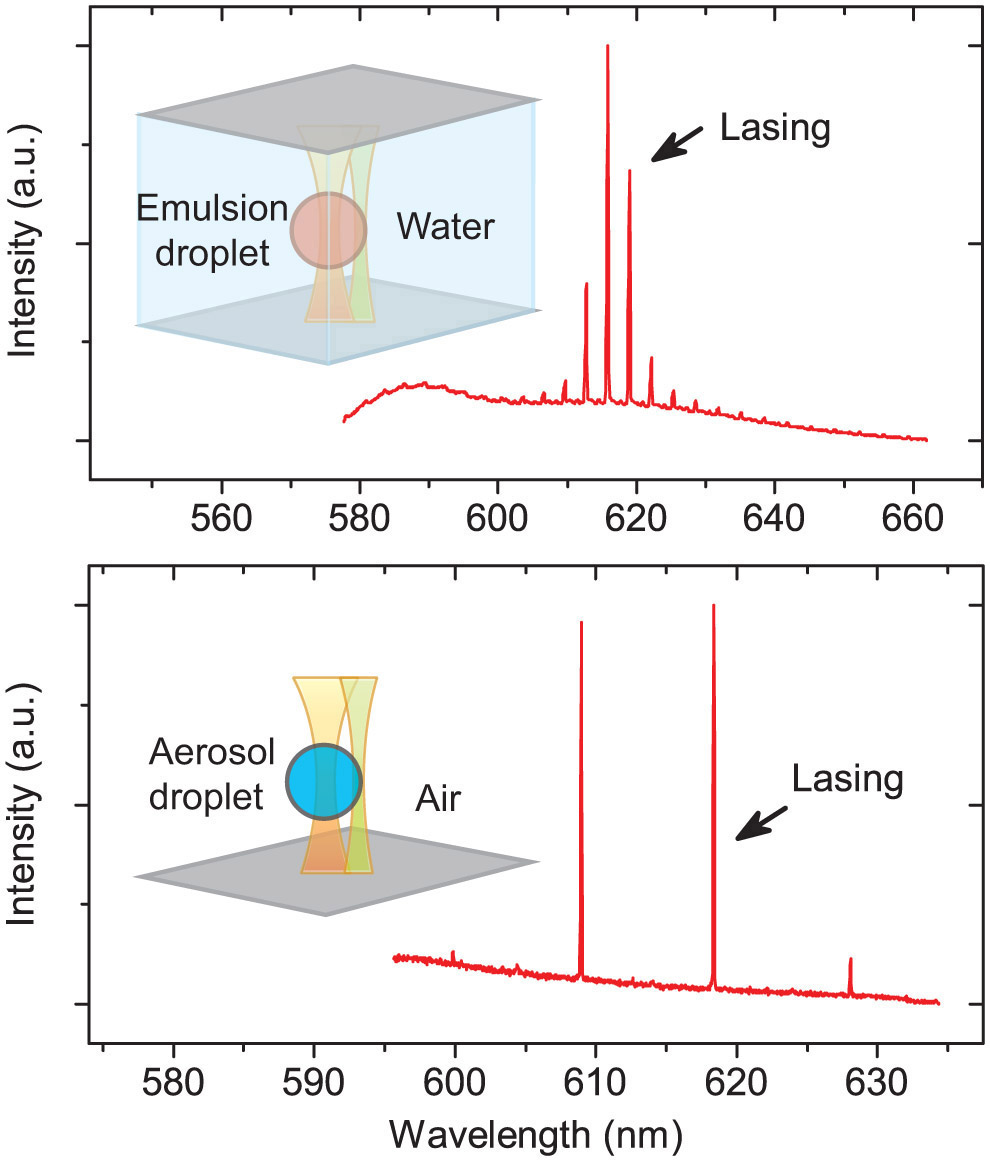 Owing to the liquid surface tension, micron-sized droplets assume the shape of perfect spheres. By applying a controlled external force, the droplets' spherical shape can be perturbed in a well-defined way. Such a change in the shape of the liquid cavity then leads to a spectral shift of its resonant modes, resulting in tuning of the lasing emission wavelength. In order to achieve controlled deformation of droplet resonators, we implemented a dual-beam optical trap made of two precisely aligned optical fibers embedded within a microfluidic chip. With this experimental configuration, emulsion droplets were optically trapped and stretched by the two counter-propagating laser beams emitted from the fibers (see Figure 2). Geometrical deformation of the droplet resonator from a sphere toward a prolate spheroid then led to the spectral tuning of the WGMs. Depending on the location of the pump beam focus on the stretched droplet, red tuning or blue tuning was observed in the WGMs that scaled proportionally with the optical stretching beam intensities. Maximum spectral tuning ranges of around 0.5nm were observed for around 1W total power of the stretching beams.5 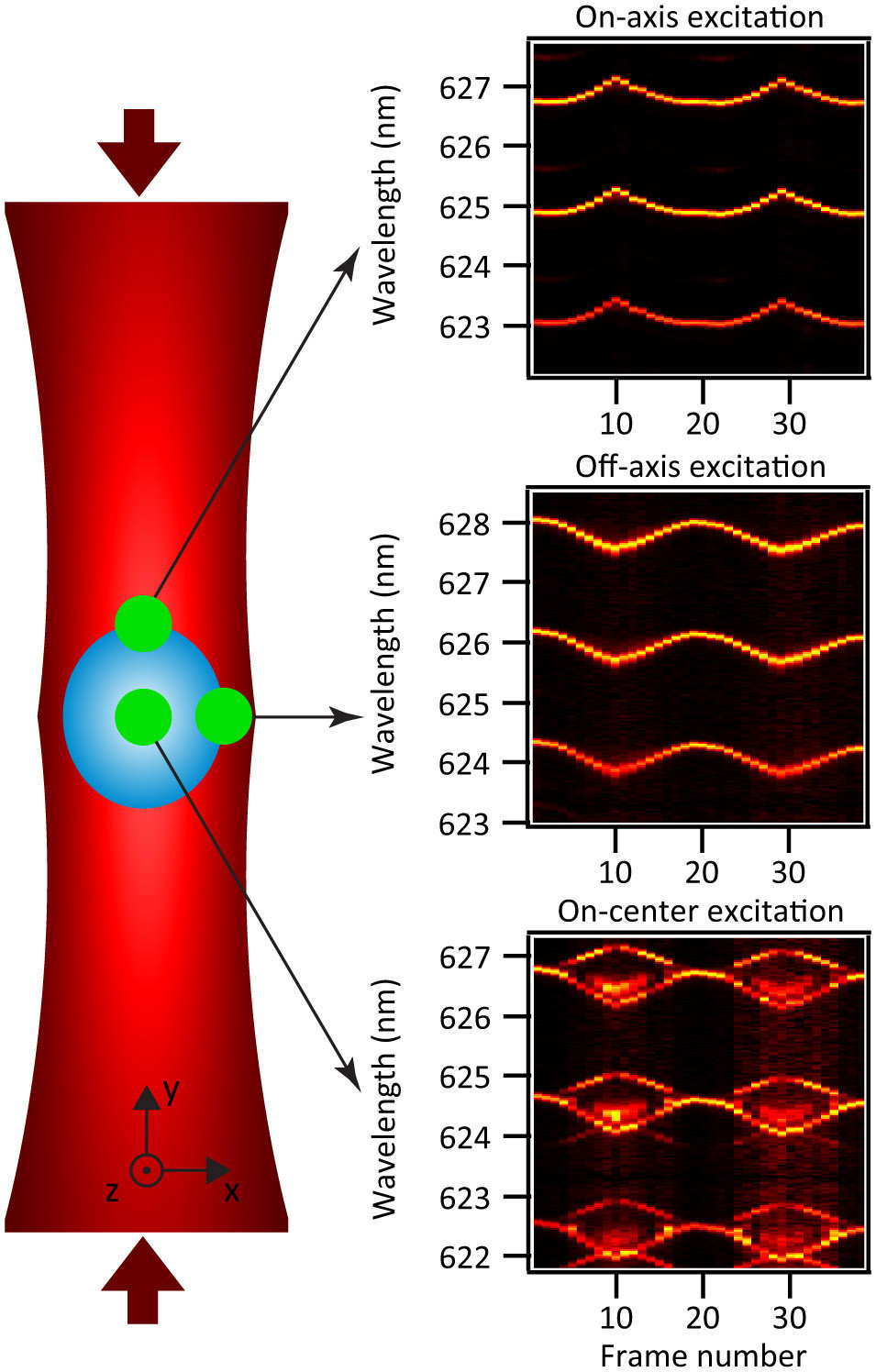 Figure 2. Spectral tuning of a lasing microdroplet by optical stretching in a dual-beam optical trap.

Bioinspired photonic devices rely on the use of biological species as the components of a photonic device. In this field, the most recognized recent developments have been the demonstration of living lasers using green fluorescent protein-expressing mammalian6 or E. coli bacterial7 cells as the gain media placed inside a Fabry-Pérot resonator and in vitro lasing from fluorescent proteins using a ring resonator.8 In our experiments we employed resonators based on aqueous droplets standing on a superhydrophobic surface.9 The studied droplets contained a laser gain medium in the form of a solution of the Venus variant of the yellow fluorescent protein (see Figure 3) or E. coli bacterial cells stably expressing the Venus protein (see Figure 4). Upon optical pumping with femtosecond laser pulses at 488nm, we observed Venus lasing in both cases. For the case of an aqueous solution of Venus fluorescent protein, stable laser emission was observed, while with bacterial cells, fluctuations were observed in the laser emission intensity due to diffusion/active motion of single bacterial cells in and out of the excitation volume. 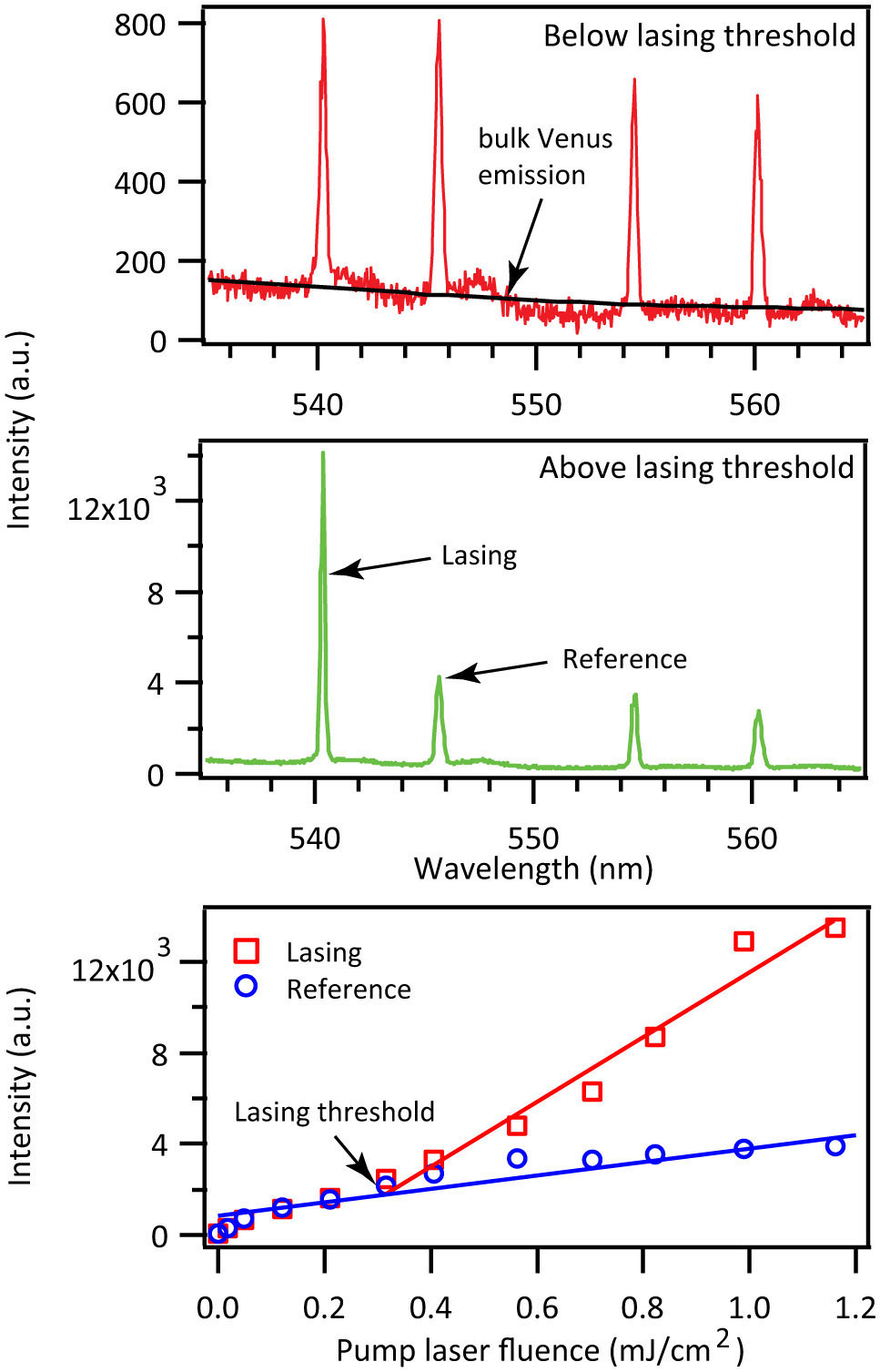 Figure 3. Lasing in a microdroplet doped with a solution of the Venus variant of yellow fluorescent protein. 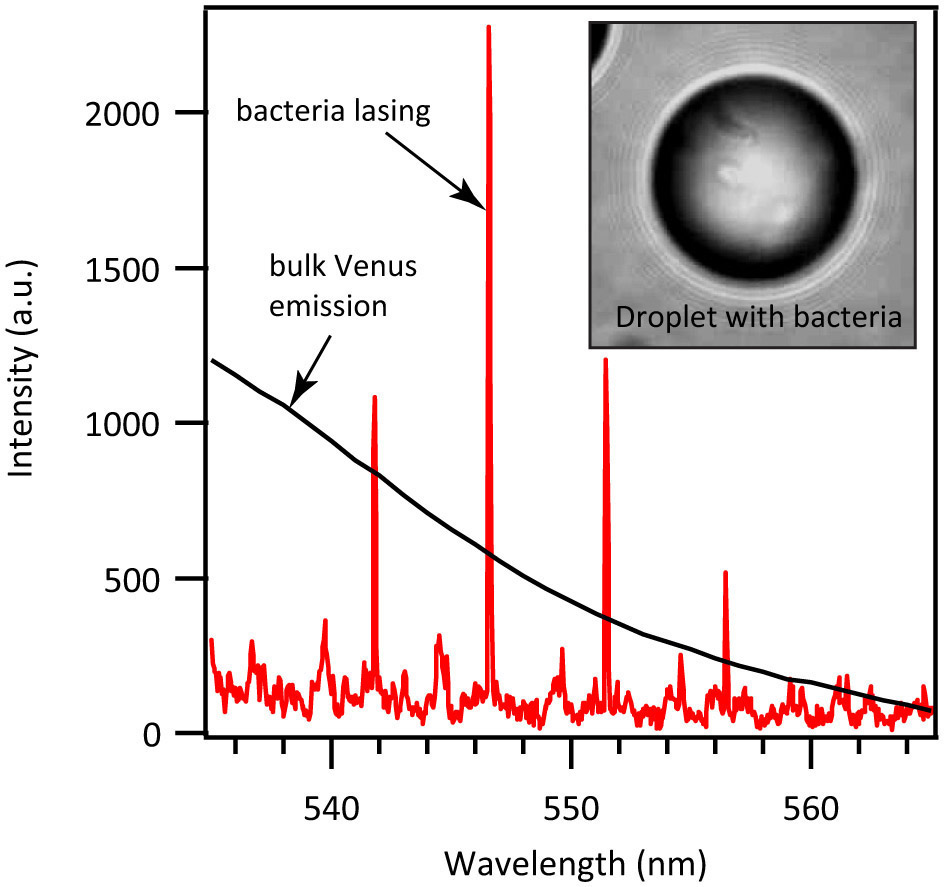 In summary, optofluidic microlasers with droplet resonators can serve as tunable light sources that can be optically manipulated and employed, e.g., for local probing. They can also be used for sensitive chemical and biological analysis because of the high sensitivity of stimulated emission to small perturbations in the shape, size, and material properties of the droplet cavity. Further potential for biosensing based on droplet lasers lies in exploring the fluorescence resonance energy transfer (FRET) phenomenon.8 Finally, aqueous droplet microlasers are compatible with biological gain media. Such biological microlasers can be self-healing, i.e., they allow for the regeneration of the gain medium based on fluorescent proteins following photobleaching. Self-recognition and self-assembly of biological molecules can be exploited to program and modulate the laser characteristics, thus paving the way to new methods of biosensing. Our immediate focus now is to achieve sensitive biological analysis with droplet resonator optofluidic microlasers using the FRET phenomenon.

Alper Kiraz received his PhD in electrical and computer engineering from the University of California, Santa Barbara, in 2002. He is currently an associate professor of physics at Koç University, directing research projects on novel micro-optical devices, optofluidic lab-on-a-chip devices, molecular and gas sensors, and optofluidic-based renewable energy solutions.

Mehdi Aas received his MS in applied physics from Shahid Beheshti University, Iran, in 2005. He worked as an instructor at the University of Bonab, Iran. Since 2011 he has been a PhD candidate in physics at Koç University, where he works on developing micro-optical and optofluidic lab-on-a-chip devices.

Alexandr Jonáš received his PhD in physical and material engineering from Brno University of Technology in 2001. He is currently an assistant professor of physics at Istanbul Technical University, working on the development and applications of optical micromanipulation, microscopy, and spectroscopy techniques for characterizing complex soft-matter systems.