Nonlinear optical processes are often used for extending the operational wavelength of lasers. For example, widely used green lasers are based on the second-harmonic generation (frequency doubling) of near-infrared (NIR) laser light. The construction of such nonlinear optical light sources generally requires strong laser input, sufficiently large nonlinear optical crystals, and fulfillment of the phase-matching condition. These constraints, which also require bulky optical components, prevent the monolithic fabrication of nonlinear optical frequency conversion lasers on the micron scale. An actively investigated method for reducing the nonlinear crystal size is the use of micro/nanoscale photonic media with strong photon confinement capability, such as whispering-gallery-mode resonators,1, 2 plasmonic structures,3 and photonic crystals.4–6

One way to dispense with the bulky external lasers in the nonlinear optical systems is by including active light emitters within the nonlinear materials (the approach adopted here). We are studying gallium arsenide (GaAs)-based photonic crystal nanocavity lasers containing indium arsenide (InAs) quantum dots7 (see Figure 1). The photonic crystal nanocavity supports an optical mode with a high quality factor and a small mode volume (meaning strong optical confinement in both time and space). The quantum dots emit brightly in the NIR and enable lasing oscillation under optical carrier injection (which can be substituted by electrical carrier injection in a future device design). The large second-order optical nonlinearity of GaAs facilitates efficient intra-nanocavity frequency conversion processes, such as second-harmonic and sum-frequency generation, using the internally generated coherent NIR light. Therefore, the monolithically fabricated nanoscale laser can generate frequency-converted light without any additional optical elements.

Figure 1. Left: Schematic of a frequency-doubled nanolaser based on a gallium arsenide (GaAs) photonic crystal nanocavity containing quantum dots for gain. The nanolaser lases in the near-infrared (NIR) under carrier injection and simultaneously emits coherent visible light (VIS) generated via intra-nanocavity frequency doubling. The nanocavity shown is of type L3 (a line of three missing holes in the pattern). Right: A calculated field distribution of a NIR lasing mode confined in an L3-type nanocavity. a: Lattice constant.

The frequency-doubling process occurring within the nanolaser is highly efficient, regardless of the small structure size. We confirmed this by analyzing the laser output characteristics in both the NIR and visible wavelength regions7 (see Figure 2). The second-harmonic signal is observable even around the NIR-mode lasing threshold, where only a few photons exist in the cavity on average. When using another nanolaser with a different cavity design, an average intra-cavity photon number of only ∼0:1 was enough to detect the second-harmonic signal (not shown). In that case, the nonlinear frequency-conversion efficiency reached at least 10%/W. 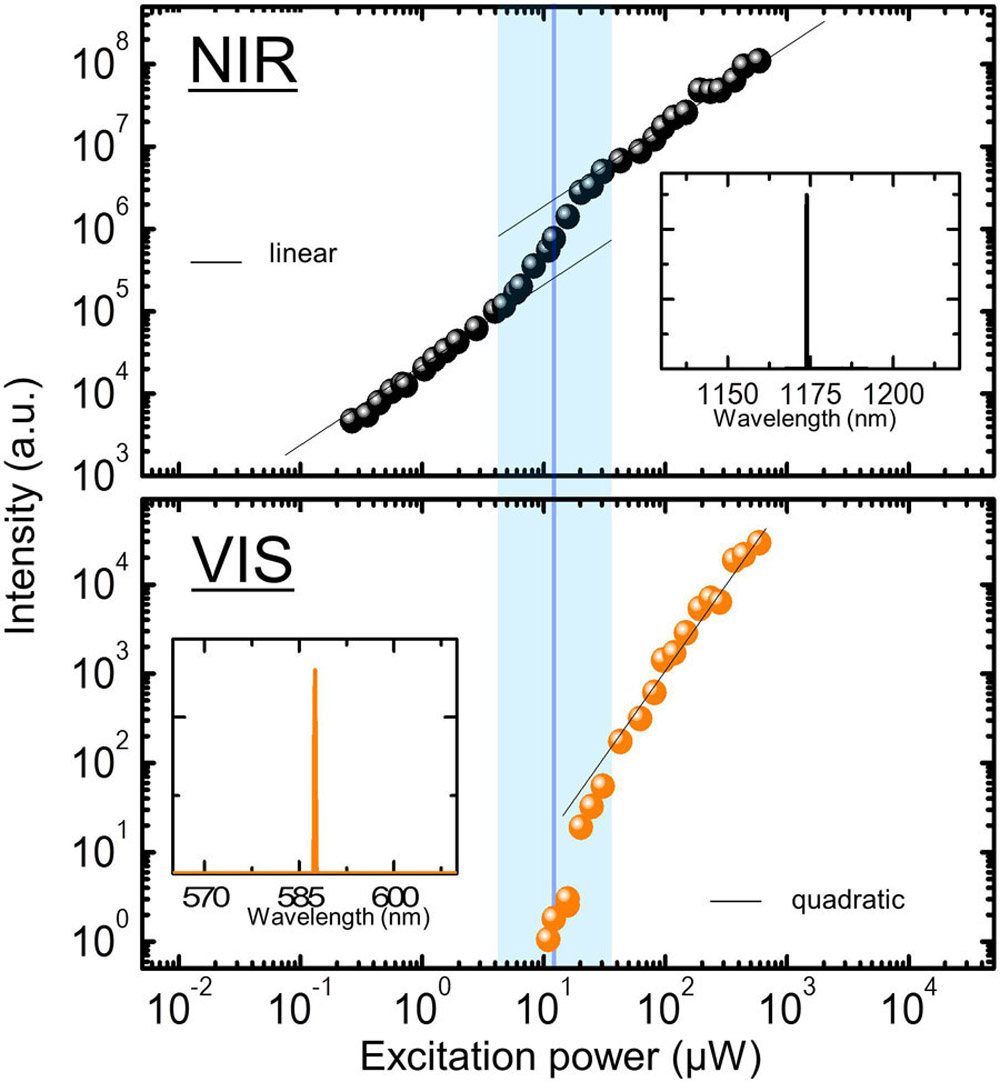 Figure 2. Laser output characteristics in the NIR and visible wavelength regions. The visible signal was observed even around the NIR lasing threshold (thin blue line), where only a few photons are present in the cavity on average. a.u.: Arbitrary units.

Frequency summing is also possible using the same photonic crystal platform but with a different cavity design. We used a nanocavity of type H1 (in which a single hole is missing in the photonic crystal) to support simultaneous three-mode lasing8 (see Figure 3). Frequency summing and doubling using the three lasing modes result in six sharp visible lines. The lack of a phase-matching condition directly facilitates the observed multiple frequency mixings spanning a wide wavelength range. 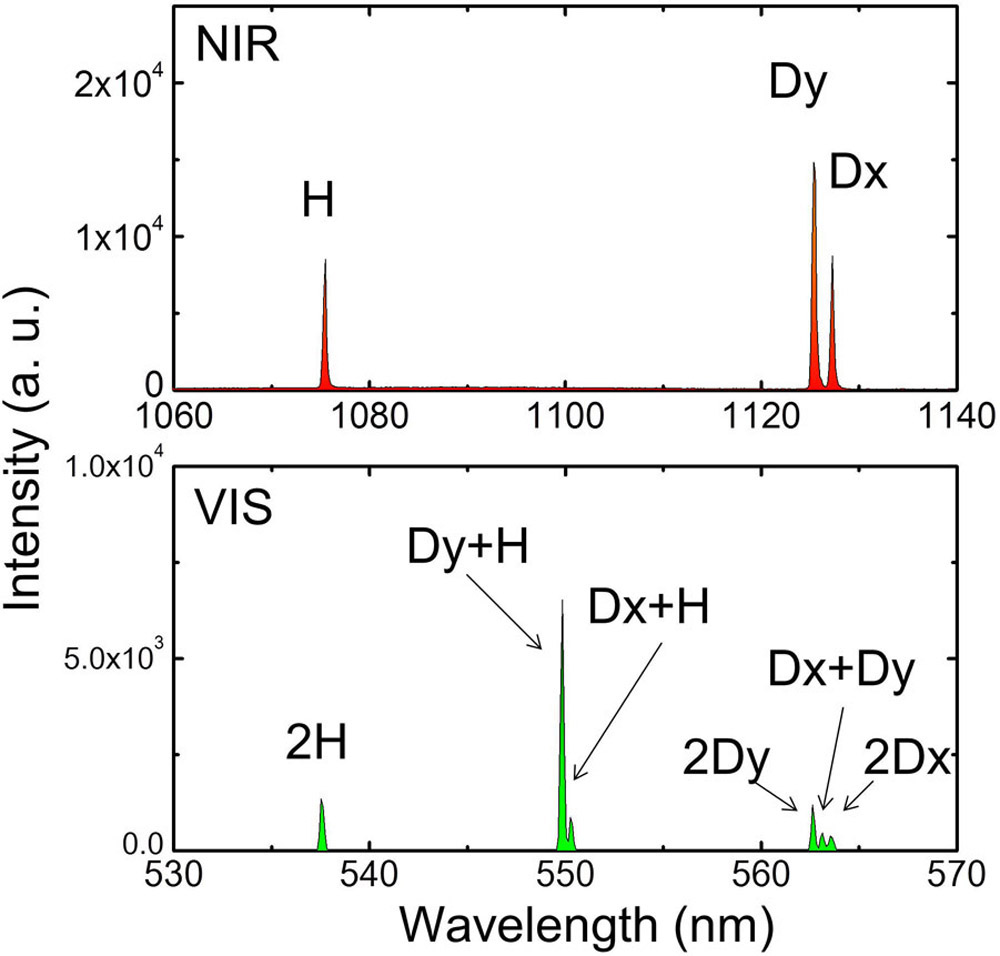 Furthermore, the capability of monolithic fabrication enables the integration of a large number of frequency-doubled nanolasers on a single chip. We integrated 26 nanolasers of different colors within a footprint of 0.004mm2 and measured color near-field images of each device, one by one (see Figure 4). The microscale chip covers almost the entire visible wavelength range from blue-green to red using photonic crystals whose lattice constants range from 244 to 340nm in increments of 3.85nm. This result highlights the advantage of active frequency-doubling nanolasers, which can be operated simply by carrier injection and do not require sophisticated external frequency tunable lasers, or the fulfillment of the phase-matching condition.

Figure 4. Color near-field images of 26 different frequency-doubled nanolasers that are monolithically integrated on a single micron-scale semiconductor chip. The nanocavities have the design shown in Figure 1, with the lattice constant ranging from 244 to 340nm. λ: Wavelength.

To summarize, we have demonstrated frequency-doubled nanolasers based on photonic crystal nanocavity quantum dot lasers. These early-stage devices have many issues that remain to be studied, such as electrical current injection, increasing the output power, and elucidation of the nanoscopic origin of the nonlinearity, all of which we are pursuing. These nanolasers offer many exciting possibilities for future use. One interesting direction would be to exploit the high efficiency of the frequency conversion for applications involving few-photon nonlinear optics. Another possibility could be mid-IR and terahertz light sources using difference-frequency generation. In particular, for the mid-IR, a giant second-order nonlinearity can be expected due to the presence of quantum dots.9

This work was supported by the Project for Developing Innovation Systems and KAKENHI 24760037 of MEXT, Japan, and by the Japan Society for the Promotion of Science (JSPS) through its FIRST Program.

Yasutomo Ota received his PhD from the University of Tokyo in 2011. He is a project research associate of Nanoquine. His research interests include quantum optics using photonic nanostructures and related optoelectronic devices.

Katsuyuki Watanabe received his PhD from the Tokyo University of Science in 2001. He is a project research associate of Nanoquine. His research interests include epitaxial growth, molecular beam epitaxy, and quantum-dot-based devices.

Satoshi Iwamoto received his PhD in applied physics from the University of Tokyo in 2002. He is an associate professor at IIS. He researches photonic nanostructures and light-matter interactions in these structures.

Yasuhiko Arakawa received his PhD from the University of Tokyo in 1980 and became a full professor of the university in 1993. He is a member of the Science Council of Japan and a fellow of IEEE and the Optical Society.