Photon upconversion, the creation of one higher energy photon out of at least two lower energy ones, has received significant attention among many research communities. Investigations on this mechanism reach from basic material science over fundamental physical processes to many applications, including cancer therapy, biological imaging, lasers, and solar energy conversion.

We are interested in the conversion of the infrared part of the solar spectrum that is not exploited by solar cells to another spectrum that can be used by these devices. Silicon solar cells do not employ around 35% of the total photon flux from the sun because these photons have less energy than the silicon's band gap energy. As a result, these so-called sub-band-gap photons can be transmitted through the solar cell when the device is designed accordingly, which in general means a bifacial layout. By attaching an upconverter to the rear side of a bifacial solar cell to convert sub-band-gap photons into photons that can then be exploited by the cell (see Figure 1), it is possible to extend the spectral response of the photovoltaic device further into the infrared. Consequently, this can significantly increase the maximum possible short-circuit current of the solar cell. Researchers have shown that upconversion can enhance the radiative efficiency limit of silicon solar cells from close to 30% up to more than 40%.1 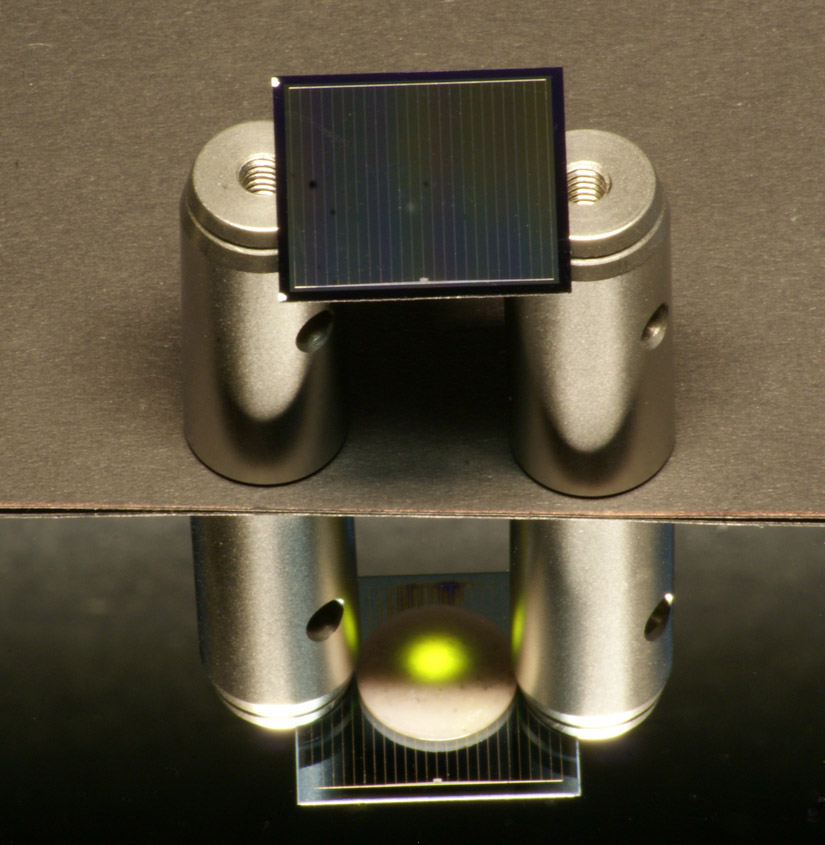 In silicon solar cells, lanthanide-doped materials such as hexagonal sodium yttrium fluoride (β-NaYF4) doped with trivalent erbium (Er3+) are especially suitable upconverter materials. In 2007, Shalav and collaborators used silicon solar cells with an upconverter of β-NaYF4 doped with 20% Er3+ to perform the first proof-of-principle experiments with monochromatic laser excitation.2 Although we and others have increased the performance of photovoltaic cells since then, the effects of upconversion on solar cell efficiency have remained marginal.3 Furthermore, in these studies researchers used large irradiances to characterize the upconverter solar cell devices. Since upconversion is a nonlinear process, its quantum yield and, consequently, the solar cell efficiency enhancement due to upconversion increase with irradiance. Therefore, the figures of merit have to be compared at the same irradiance levels or, even better, at the same level of solar concentration.

Recently, we developed a new method to characterize upconverter materials and upconverter solar cell devices with broad-band excitation. This is much more similar to the solar spectrum than the previously used monochromatic laser illumination. We also introduced a spectral mismatch correction method to correct for spectral differences between the artificial broad-band spectra and the solar spectrum. Our methods allow characterization of upconverter solar cell devices under conditions relevant for the application of harvesting solar radiation. They also allow more precise prediction of how the devices perform in the field under real solar illumination.

We fabricated an upconverter solar cell device by attaching the upconverter, made of β-NaYF4 doped with 25% Er3+ and embedded in a polymer, to the rear side of an optimized bifacial silicon solar cell. We then investigated this upconverter solar cell device with monochromatic laser excitation, broad-band excitation, and under the concentrated light of a solar simulator. The figure of merit in these experiments was the gain in short-circuit (SC) current density due to upconversion (UC) of sub-band-gap photons, ΔjSC, UC. The ΔjSC, UC increases significantly for broader spectra (see Figure 2). Eventually, we found the largest ΔjSC, UC of 13.3±3.0mA/cm2 for investigations with a solar simulator for a solar concentration level of 207±86suns. The intrinsic short-circuit current density of the solar cell was 33.4mA/cm2 with a corresponding cell efficiency of 17.6% under 1sun standard measurement conditions. Therefore, the upconverter enhanced the efficiency of the solar cell by 0.19±0.04%.4 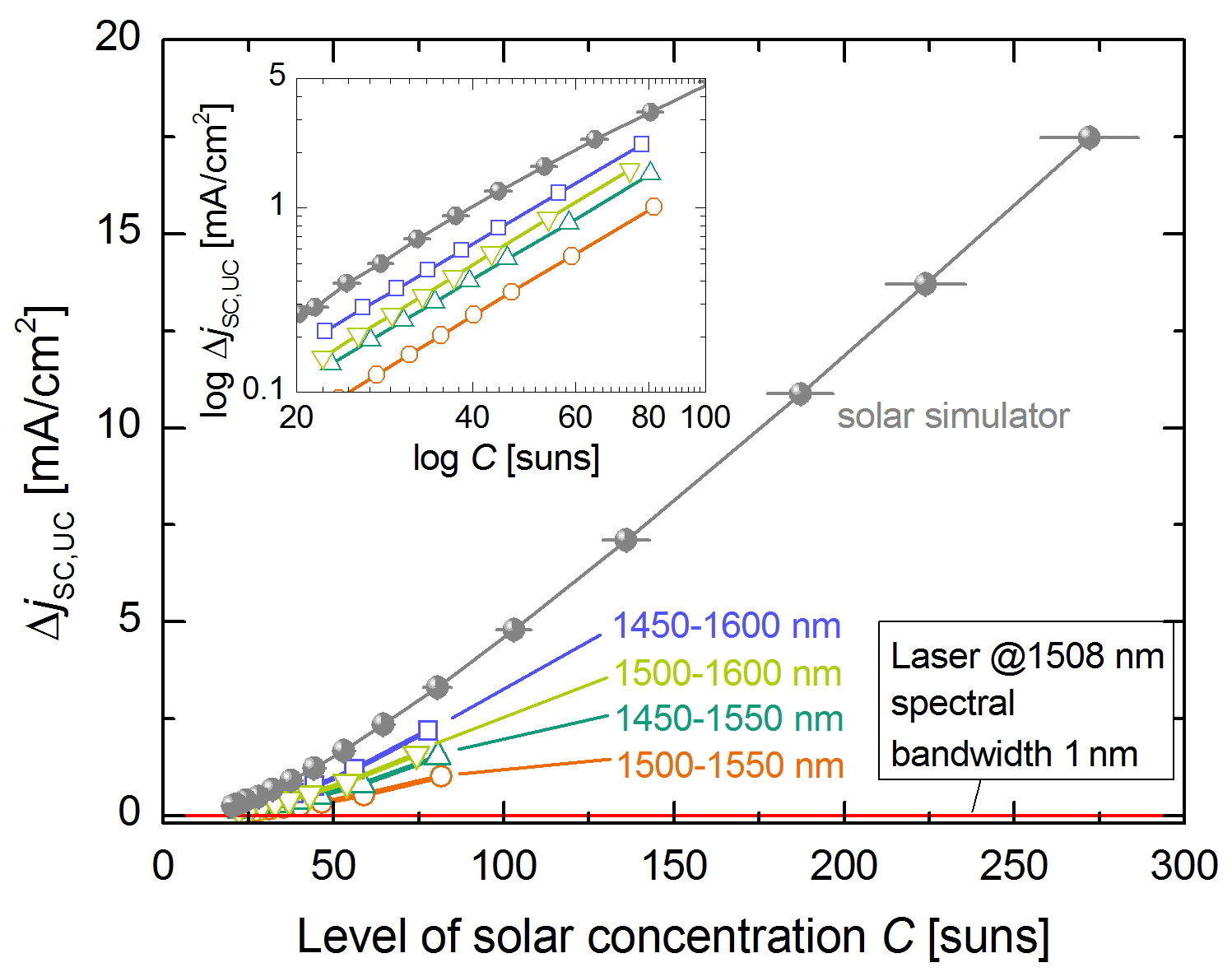 With respect to the level of solar concentration, the enhancement determined with a solar simulator was approximately 500 times larger than the values estimated in the literature from monochromatic measurements for comparable upconverter solar cell devices.2, 3 Our upconverter solar cell device achieved such good performance largely due to the excellent bifacial silicon solar cells optimized for high transmittance of sub-band-gap photons and the quality of the upconverter material, which has improved significantly over the past few years.

To further exploit the potential of upconversion for photovoltaics, we need to address the gap in the absorption spectrum between the band gap of the solar cell (around 1150nm) and the shorter wavelength edge of the absorption spectrum of the upconverter (at approximately 1480nm). If this part of the solar spectrum was shifted to the absorption range of the upconverter, the efficiency of the device could be increased by more than a factor of 4. Realizing this concept, also called spectral concentration,5 is one of the main remaining challenges for the successful application of upconversion in silicon photovoltaics. The next steps of our work include the search for near-infrared dyes or quantum dots, which serve as downconverters for the spectral concentration. We will also investigate other upconverter materials and the fundamental upconversion processes to find an upconverter with even higher efficiency. Furthermore, we will investigate our devices with real sunlight to validate our spectral mismatch correction method.