Lasers based on semiconductor materials, so-called diode lasers, are highly efficient, compact light sources.1 In high volume they can also be produced at very low cost. In contrast to lasers based on specific atomic transitions, such as solid-state or gas lasers, diode laser materials engineering enables generation of light in a large portion of the optical spectrum.2 The great versatility of diode lasers allows their direct use in many biophotonics applications, including photocoagulation,3 diffuse optical imaging,4 and optical coherence tomography (OCT).5, 6

Nonlinear frequency conversion of diode lasers is an attractive method of overcoming the limitations of solid-state lasers.1 However, efficient frequency conversion requires optimizing parameters such as spectral and spatial quality. With the introduction of high-brightness tapered diode lasers, beam quality has reached a level suitable for direct high-power frequency conversion. Frequency doubling of these lasers in periodically poled crystals has resulted in up to 2W of output power in the green spectral range.7, 8 Moreover, combining two of these lasers with subsequent sum-frequency generation provides close to 4W of nearly diffraction-limited green light9 without the need for external cavities. Opportunities also exist for further increasing green output power.10 Importantly, these power levels meet the requirements for direct application of lasers in treatment of vascular diseases and for pumping of titanium (Ti):sapphire lasers.11

In the diagnosis of disease, the broad spectrum and ultrashort pulses of Ti:sapphire lasers help to increase the resolution of different imaging techniques, for example, multiphoton tomography12 and OCT.5 Ti:sapphire lasers are pumped in the green spectral range, and traditionally, frequency-doubled diode-pumped solid-state lasers (DPSSs) are the light sources preferred due to their high output power and excellent beam properties. However, compact and efficient pump sources might enable further widespread adoption of Ti:sapphire lasers, in particular within multimodal bioimaging applications.

Here we describe initial results of in vivo OCT imaging of the retina and skin using a Ti:sapphire laser pumped by a frequency-doubled, distributed Bragg reflected (DBR) tapered diode laser.13 For the ophthalmic imaging, we used a modified Spectralis OCT device (Heidelberg Engineering) with a built-in fixation target and eye-tracking device. The system was modified to permit use of wide-bandwidth light sources at 800 and 1060nm. We modified the Ti:sapphire laser to provide stable mode-locked operation with an output power of 80mW at 1.4W pump power with a spectral width of 90nm (200nm full width at half-maximum), which provides an axial resolution of <4μm. We coupled the light from the Ti:sapphire laser to an optical fiber and regulated the output power from the fiber to give a maximum of 0.8mW at the cornea, well below safety limits. Figure 1(b) shows the resulting image, along with comparisons with the built-in source—Figure 1(a)—and a commercial Ti:sapphire laser—Figure 1(c). 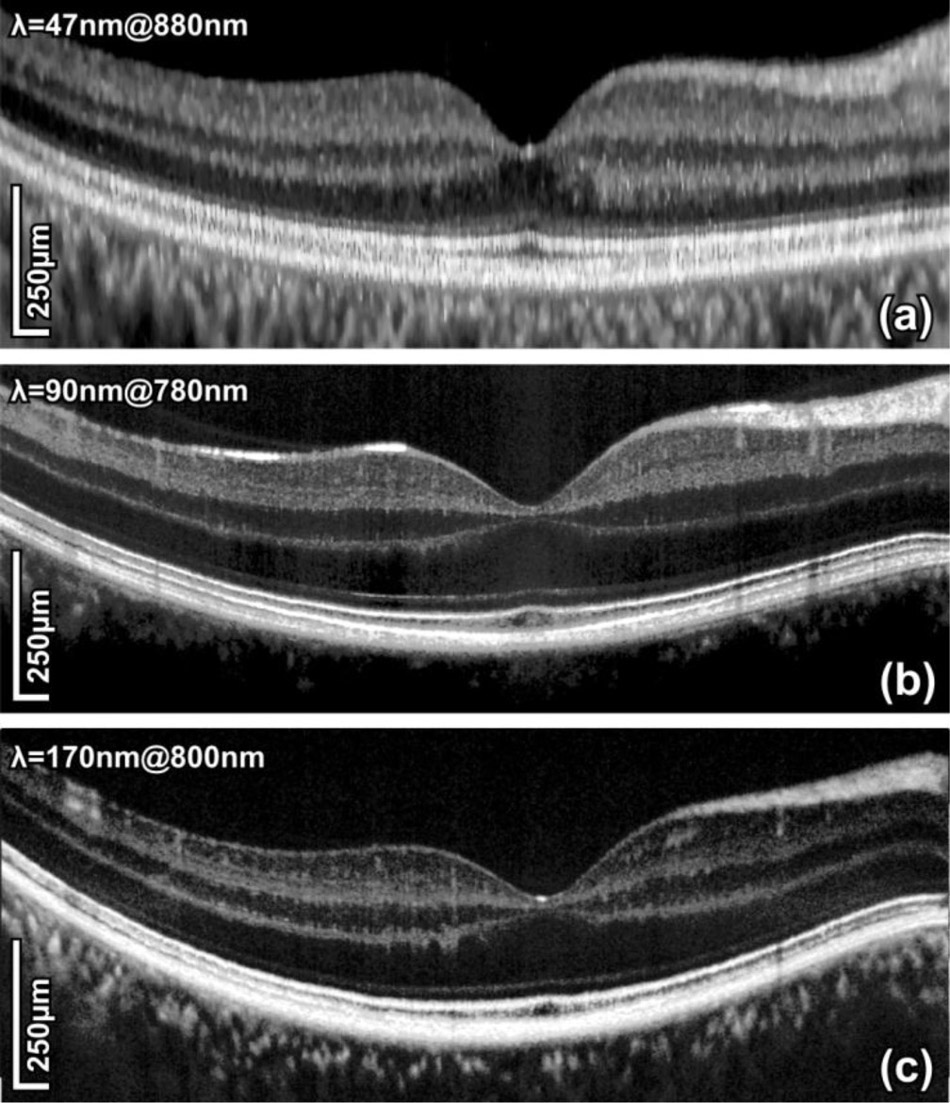 The use of a broad-bandwidth laser source enabled despeckling at high axial resolution and visualization of detailed retinal anatomy, such as the major retinal layers and the fine structure of the retinal pigment epithelium-choroid complex, as well as that of the optic nerve, including the lamina cribrosa, where identifying structural changes is crucial in diagnosing glaucoma.10, 13

In a home-built OCT system tailored for in vivo skin imaging, we used the Ti:sapphire laser to demonstrate high-resolution imaging of skin. Figure 2 shows a tomogram of the left index finger of a healthy subject with penetration depth of about 800μm, clearly visualizing subsurface structures of normal skin, including the epidermis, dermoepidermal junction, dermis, and sweat ducts.10 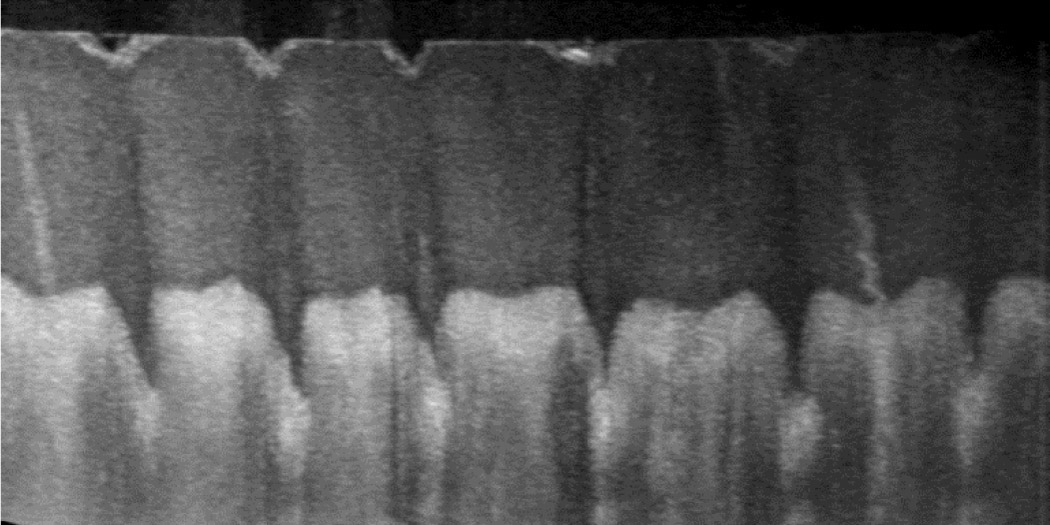 In summary, frequency-converted tapered diode lasers show great potential for many applications in biophotonics. In particular, the high axial resolution and good contrast of OCT images clearly show the potential of using Ti:sapphire lasers pumped by frequency-doubled DBR tapered diode lasers for biophotonic imaging. The lower cost and footprint of these pump lasers should enable significant widespread adoption in diagnostics, for example, OCT and multiphoton imaging. Our aim, and a work in progress, is to combine several such imaging modalities on a common platform driven by one light source, thus enabling compact, multimodal imaging.

Ole Bjarlin Jensen is a senior researcher in the Department of Photonics Engineering at DTU Fotonik. For more than 10 years he has worked on diode lasers, solid-state lasers, and nonlinear frequency conversion, as well as biomedical applications of laser systems.

Anders Kragh Hansen joined DTU Fotonik as a postdoctoral fellow in 2013. He is currently working on research and development of laser modules involving nonlinear frequency conversion with laser diodes as sources. Biophotonics applications are of special importance to this work.

Paul Michael Petersen is a professor. He has more than 25 years of research experience in laser physics, nonlinear optics, and optical measuring techniques. He has headed several collaborative research projects within laser physics and LED lighting.

Peter E. Andersen, PhD, is a senior scientist and research professor at the Technical University of Denmark, where he leads research in biomedical optics. He has more than 15 years of research experience in light sources for biomedical optics, bioimaging, and OCT systems.

André Müller joined the Ferdinand-Braun-Institut in 2013. He works on high-brightness diode lasers and diode laser systems for spectroscopic applications.

Bernd Sumpf has 20 years of experience in developing lasers. He has been at the Ferdinand-Braun-Institut since 2000. His current research topics are high-brightness diode lasers and diode lasers for sensory applications and Raman spectroscopy.

Angelika Unterhuber has 15 years of experience in ultrafast optics. Currently, she works at the Medical University of Vienna where her research interests are focused on development of novel light sources and their biomedical application, especially in the field of OCT and nonlinear imaging.

Wolfgang Drexler has more than 20 years of experience in biophotonic imaging and OCT. Since 2009 he has been full professor of medical physics and head of the Center for Medical Physics and Biomedical Engineering. He is a member of the Austrian Academy of Sciences and has more than 150 publications.