Plasmonics represents a vibrant frontier in nanophotonics that aims to control light at a length scale below the diffraction limit (the point at which resolution is compromised by light diffraction). A nanocluster of metallic and/or semiconductor nanoparticles creates a response that depends on the size, shape, and geometric arrangement of the components, which generate strong near-electromagnetic field interactions among themselves. This response offers great flexibility in designing custom nanophotonic devices with specific properties, with applications in sensing and imaging. However, the sensitive nature of the hybrid nanostructures also presents serious challenges in their synthesis and characterization.

We use an atomic force microscope (AFM) to assemble plasmonic nanostructures and then characterize their properties using single-particle spectroscopy. The AFM-based assembly method combines the advantages of top-down and bottom-up fabrication techniques. We synthesize the individual components using solution-based self-assembly methods. Therefore, the components are easy and/or inexpensive to produce, small in size, of high crystalline quality, and give us flexibility in selecting materials. Furthermore, the assembly process relies on a scanning probe, which provides the degree of control typically only achievable using the top-down approach.

Using improved AFM nanomanipulation methods,1,2 we have assembled and investigated a number of interesting plasmonic nanostructures. We monitored the photon emission dynamics from a single cadmium selenide/zinc sulfide (CdSe/ZnS) quantum dot (a semiconductor in nanocrystal form) when a gold nanoparticle (Au NP) was pushed toward it.3, 4 The lifetime of the quantum dot was drastically reduced: by more than two orders of magnitude in some cases. The blinking behavior (fluorescence intermittency) typical of colloidal quantum dots largely disappeared: see Figure 1(b, c). Using this well-controlled, simplest hybrid NP molecule, we were able to explain the above changes in dynamics, the conditions for the changes, and the conditions for photoluminescence enhancement and quenching (reduction). 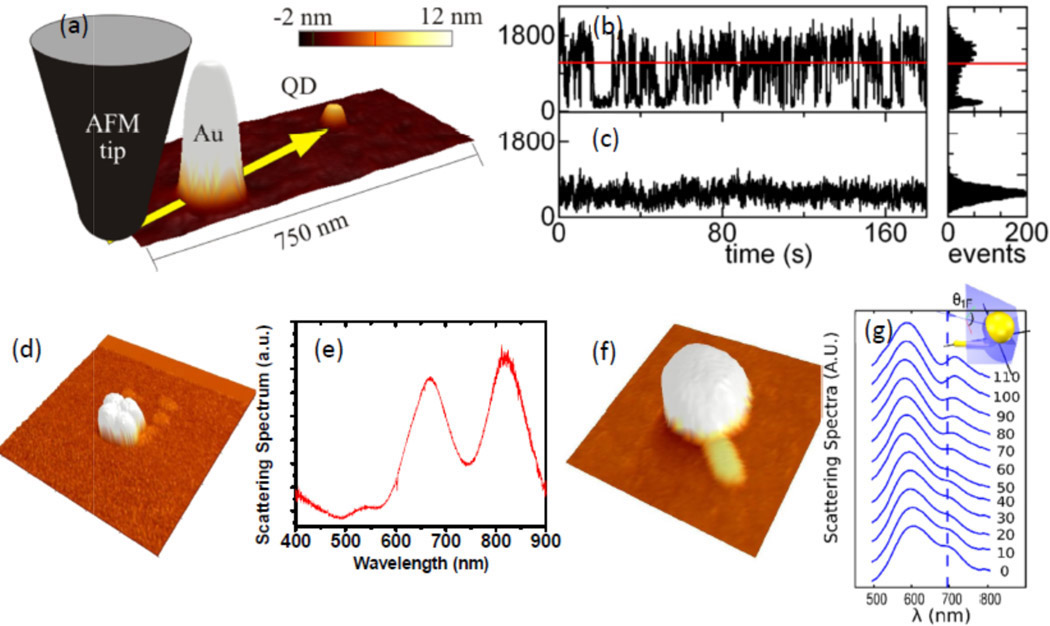 Figure 1. (a) Atomic force microscopy (AFM) image and illustration of assembly of the simplest hybrid metamolecule consisting of a single quantum dot (QD) and a gold (Au) nanoparticle. (b) Photon emission before the gold nanoparticle has been placed within a few nanometers of a quantum dot. (c) Photon emission after the gold nanoparticle placement close to the quantum dot. (d) AFM image of a metamolecule made of a ring of four gold nanoparticles. (e) The scattering spectrum showing a Fano resonance based on the interference between magnetic and electric dipole resonance. (f) A plasmonic protractor made of a gold nanosphere and a gold rod. (g) Polarization-resolved scattering spectra provide information on the relative orientation between two nanoparticles. A.U.: Arbitrary units. λ: Wavelength.

Figure 1(d) shows a different example: a metamolecule that exhibits artificial optical magnetism in the visible frequency range.5 Magnetic resonances typically do not exist in natural materials in this range (as established by Landau and Lifshitz). However, spatial arrangement of nanoparticles can be used to emulate magnetism at the optical frequency range, so that when four metamolecules (Au NPs) are closely spaced, the displacement current formed in the ring of particles gives rise to a magnetic field hot spot,6 in contrast to the typical electric field hot spot explored extensively in plasmonic nanostructures. This magnetic dipole resonance can be spectrally tuned over a wide range of wavelengths by adjusting the gap size between the NPs. The interference between the magnetic and electrical dipole resonances leads to the first example of magnetic-based optical Fano resonance (a form of resonant scattering): see Figure 1(e).

While the idea of using plasmonic NPs as a spectroscopic ruler is not new,7 we have extended this concept to realize a plasmonic protractor:8 a sensor that is capable of providing information on the relative orientation between NPs. The idea is to use two NPs that have very distinct optical properties. We placed an Au nanosphere next to an Au nanorod, as shown in Figure 1(f). The interference between the bright, dipole mode of the nanosphere and the dark, quadrupole mode of the nanorod again leads to characteristic Fano resonance. However, this Fano resonance can only be maximally excited and detected when the incident light and the detected scattering have a polarization that is parallel to the Fano axis of the two NPs: see Figure 1(g) (approximately the line that connects the center of the sphere with the contact point between the two NPs). Together with polarization-resolved scattering measurements and monitoring, the strength of the Fano resonance enables us to obtain the relative orientation between the two NPs. This protractor concept can be extended to other systems with a strongly scattering NP and other weakly scattering objects, such as several quantum dots.

Our work demonstrates a new method for nanometer-precision assembly of nanostructures with arbitrarily chosen components and geometries. In future, we will focus on establishing similarities between nano- and mesoscopic structures (those between the micro- and macroscopic scales) to assemble many more particles.

Xiaoqin Li is an associate professor in physics. She obtained a Master's in electrical engineering and a PhD in physics from the University of Michigan, and has received numerous awards, including a Presidential Early Career Award for Scientists and Engineers (PECASE).