In recent years, the superior efficiency of LED lights has made them popular replacements for indoor incandescent lightbulbs and fluorescent lamps. LEDs also have the advantage that their light output can be modulated with high-frequency signals. As a result they can also be used for ‘visible light communication’ (VLC): see Figure 1.1–3

VLC has gained much attention as a strong candidate for future indoor wireless communication because it has several advantages over conventional radio frequency (RF) wireless communications.1 First, visible light can be used freely for VLC applications, whereas most radio frequencies are regulated by government. Second, the potential communication bandwidth of visible light is incomparably wider (∼400THz) than conventional Wi-Fi bandwidth (100MHz). Third, light is easily blocked by a wall. Consequently, communication security can easily be maintained between rooms. And finally, we can easily see whether the LED and hence the VLC system is on or off. 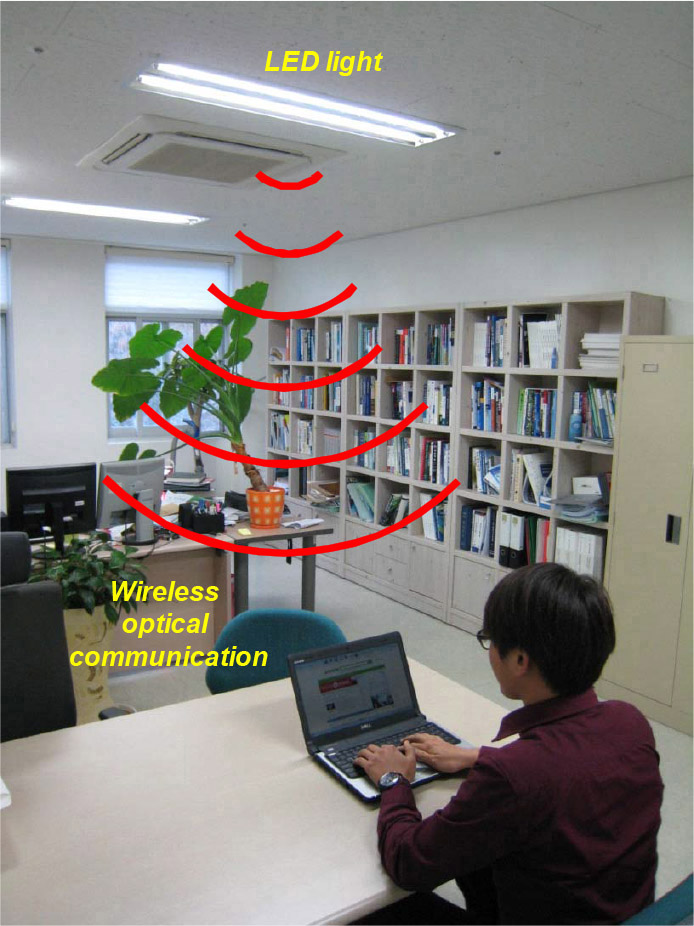 To address this, colleagues and I have proposed and demonstrated improved VLC technology based on ‘optical beamforming,’1 which focuses LED light on a desired target (see Figure 2). This technique does not depend on the electrical signal format, and thus can be widely used. It enhances the data rate of the VLC by raising the signal-to-noise ratio (SNR) of the received signal sufficiently for high-level quadrature amplitude modulation. It also enhances the transmission distance by raising the signal strength itself. 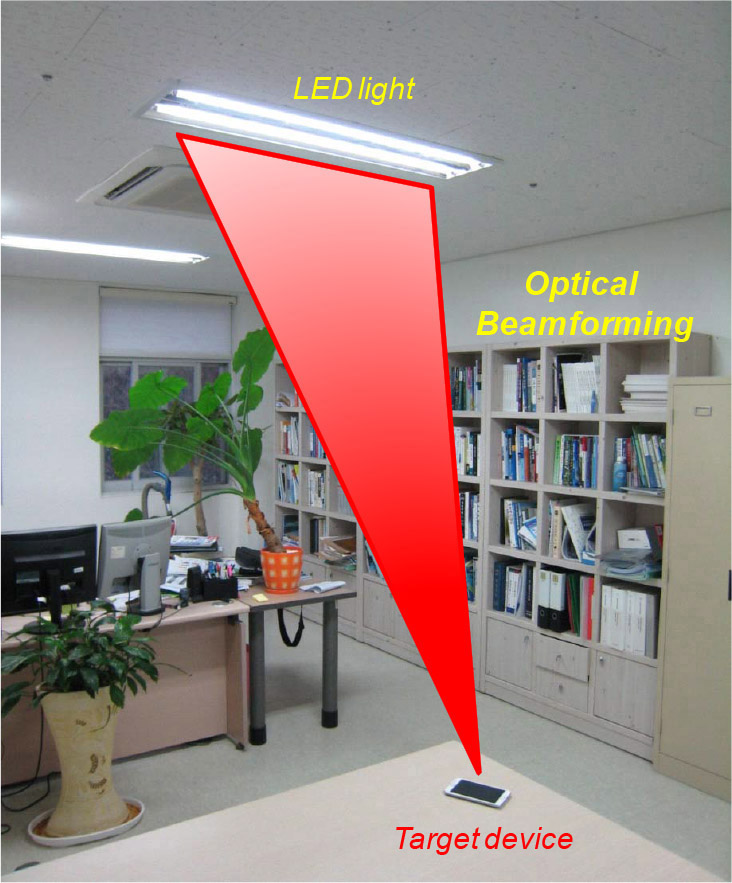 To demonstrate the proposed VLC technology, we used a spatial light modulator (SLM) to focus LED light on the desired target (see Figure 3). The SLM modulates the phase or amplitude of light on each pixel, and operates as a dynamic diffractive element controlled by electrical signals.5 We found that the transmission distance of the signal almost doubled1 and the SNR of the received signal increased by 12dB with optical beamforming (see Figure 4). We have also suggested an automatic location-detecting algorithm, based on ‘direction code.’ Using the communication algorithm, we can focus on moving devices.1 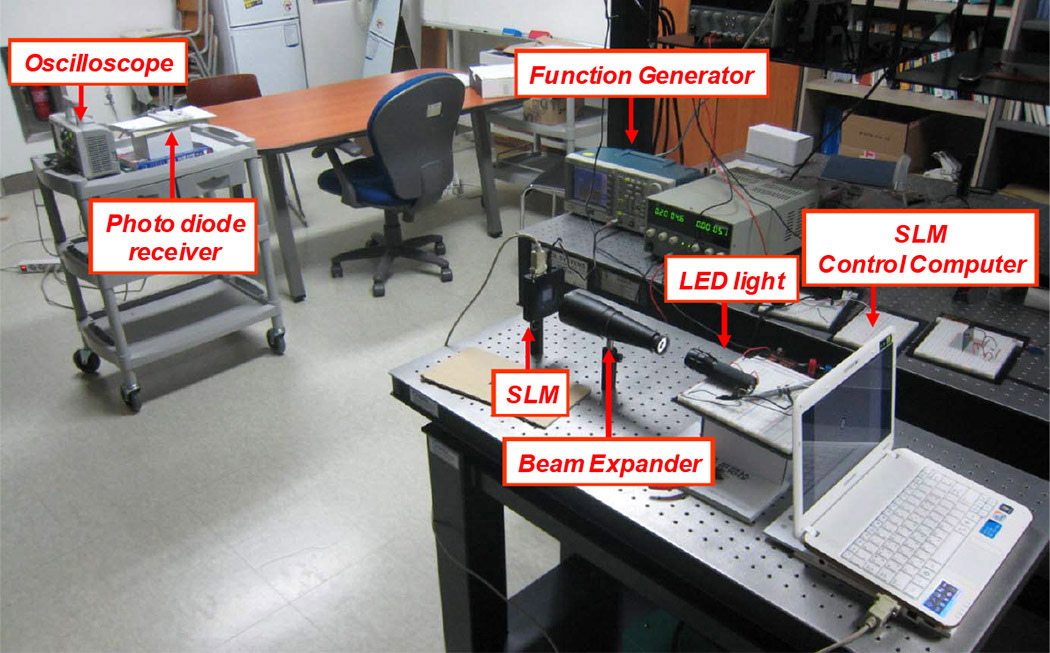 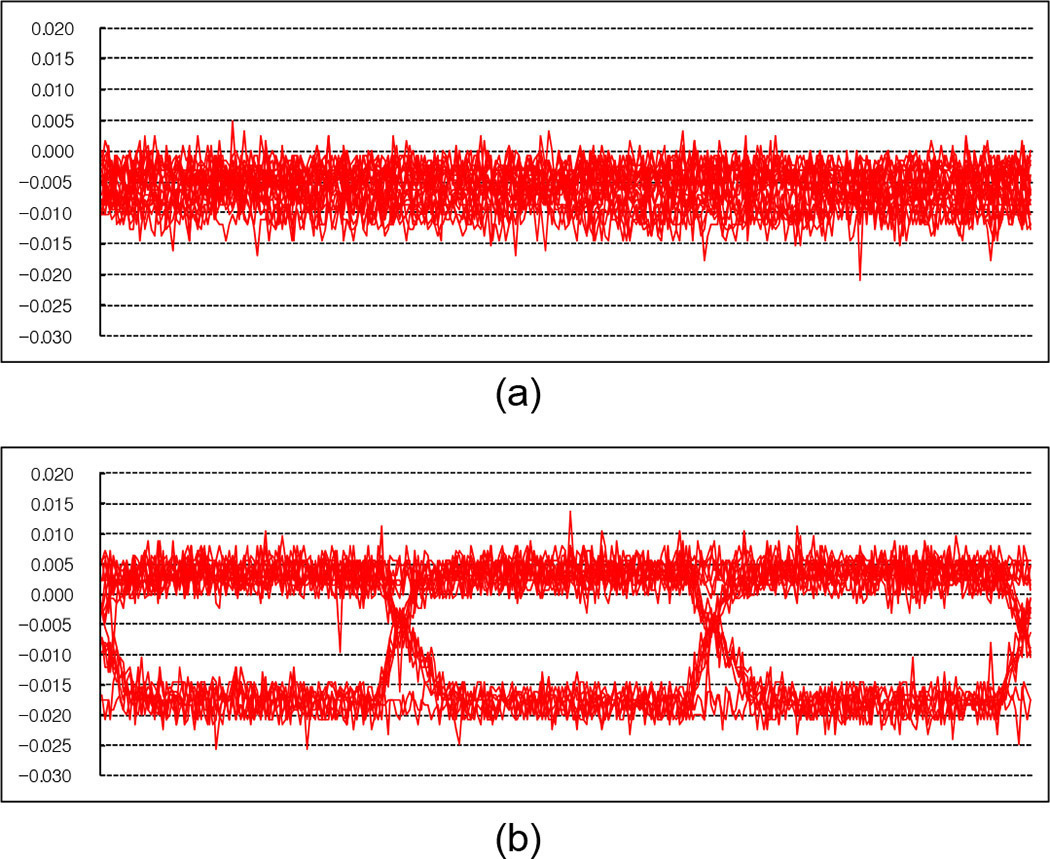 We have also used optical beamforming to demonstrate a new wireless optical power transmission technology.6 Wireless power transmission has recently attracted substantial research interest.7, 8 Most previous work is based on magnetic resonance, induction coupling, or RF electromagnetic waves, but these methods have several weaknesses. Induction coupling has a very short (less than several centimeters) transmission range. Magnetic resonance is difficult to maintain in a dynamic real field. It is also challenging for a single transmitter to meet resonance conditions for several target devices simultaneously.

To overcome these problems, we used visible light to transfer power. The technology consists of three parts: an optical source, an optical beamforming device to focus the light on a target device, and a solar cell to receive the optical power. It has the advantages of a longer transmission distance, automatic accurate targeting capability, and the ability to transmit power even to a moving device with a proper communication protocol. Our experimental result showed a power transmission efficiency of 1.3%, including electric-to-optic conversion efficiency in an LED and vice versa in a solar cell.6

In summary, we have used an SLM to modulate the phase or amplitude of each pixel of LED light so that it operates as a dynamic diffractive element controlled by electrical signals. Using a communication algorithm, the resulting optical beamforming can also be applied to moving devices. In this way, we have demonstrated significant improvement in the data rate, transmission distance, and SNR of VLC. We have also achieved power transmission efficiency of 1.3% using an LED, SLM, and solar cell. However, we expect that more than 20% power transmission efficiency may be possible in the future. We are now working to achieve this.

We are grateful for support from Basic Science Research Programs through the National Research Foundation of Korea (NRF) funded by the Ministry of Education, Science, and Technology (NRF-2010-0022318 and NRF-2012M3C1A1048865).

Sung-Man Kim is a faculty member. He is also currently chair of the optical communication and wireless communication division of the Korea Institute of Electronic Communication Sciences.