Measuring the surface profile of objects with large depth is becoming important in several industrial applications (e.g., car manufacturing). Surface profilometers can be used to determine the profile of an object by simply measuring the distance between a reference and sample points on the object. The accuracy of such measurements, however, is limited by the stability of the mechanical parts in the instrument.

Recently, absolute distance measurements have been made over a wide dynamic range and with high accuracy using a new system involving an optical frequency comb, which includes an ultra-stable mode-locked femtosecond (i.e., 10−15s) laser.1–4 This technology can now be developed to realize optical profilometry with wide axial dynamic range, i.e., beyond that of conventional methods.

We have created an optical profilometer that consists of a carrier-envelope phase-stabilized femtosecond laser (with a repetition rate of 76MHz), a single-pixel camera, electronic circuits, and a computer (see Figure 1).5–7 Our profilometer also uses the compressive sensing (CS) signal processing technique, which allows an object's profile to be reconstructed from fewer measurements than the number of sampling points. 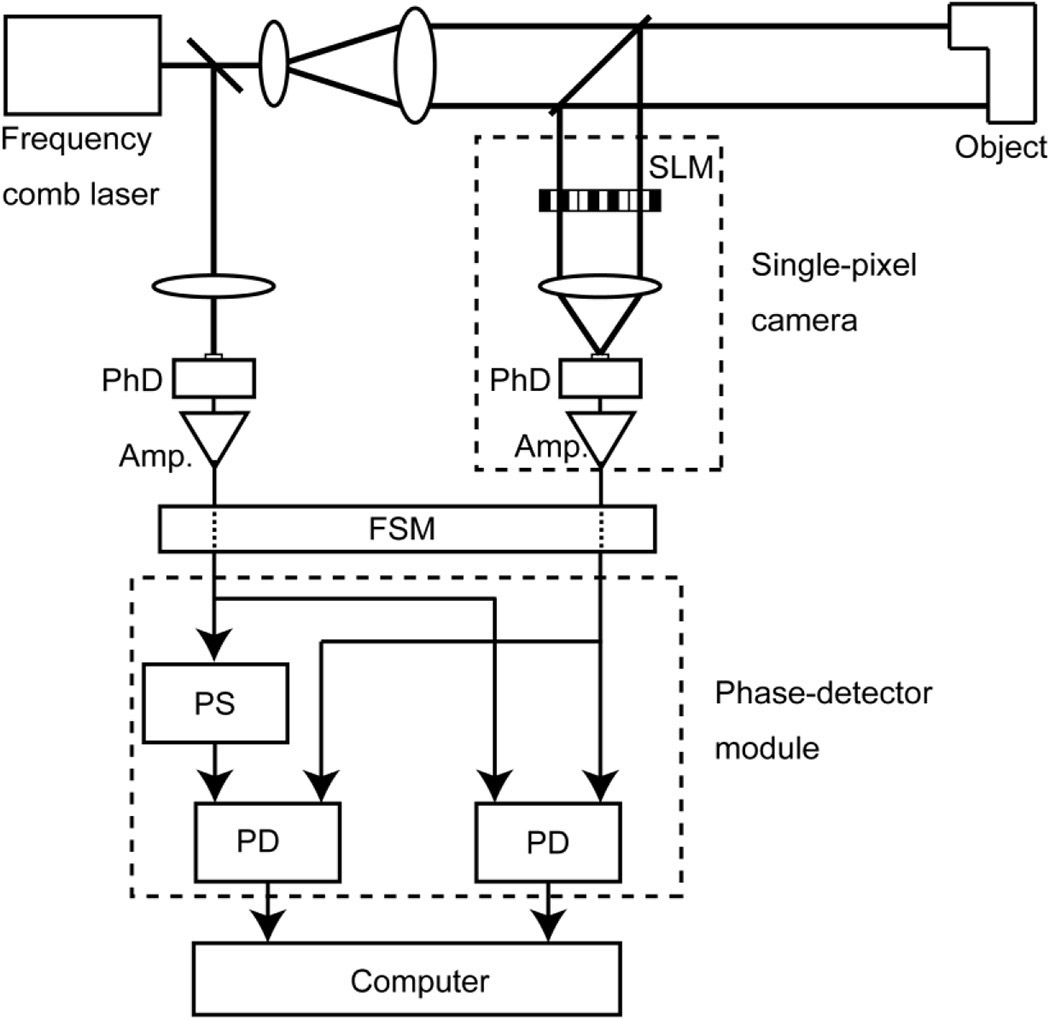 In our profilometer setup, the object wave travels through a liquid-crystal spatial light modulator (SLM) before it is detected by a photoreceiver. The reference wave is also detected by a photoreceiver. We designed the frequency selectable module (FSM) to choose the 13th-order harmonic of the laser repetition rate, and we obtain the phase difference between the spatially modulated object wave and the reference wave from the phase detector module (PDM). By integrating a two-step phase-shifting module into the PDM, we are able to eliminate the dependence of the phase measurement on the change in the intensity of the reflected light.

Although we used the CS technique to reduce the number of measurements that are required, it can only be applied to sparse signals.5, 6,8 We have designed a simple method to solve this problem and allow our profilometer to work in more useful situations. We display pseudorandom patterns on the SLM, and for each of these we measure 5000 samples of the phase information with intervals of 100μs. We then calculate the average phase that corresponds to the displayed pseudorandom pattern. We repeat this process until the number of measurements is sufficient for the CS reconstruction condition, and then extract the relative depth information at each point on the surface.5, 6 The SLM we use has a pixel size of 26μm, and we fixed the measurement range of our experiments at 200×200 pixels (5.2×5.2mm2).

We evaluated the accuracy and stability of our method by measuring the profile of a mirror with different pseudorandom patterns. We reconstructed the object's profile from the root mean square (RMS) error that we calculated from all the measured points (see Figure 2). We also measured a more complex object that was composed of three flat mirrors located in different axial positions: see Figure 3(a). The distance between the first and second mirrors was about 30mm, and about 50mm between the first and third mirrors. The resultant profile, which we obtained via 80 measurements of 10×10 pseudorandom patterns, is shown in Figure 3(b). 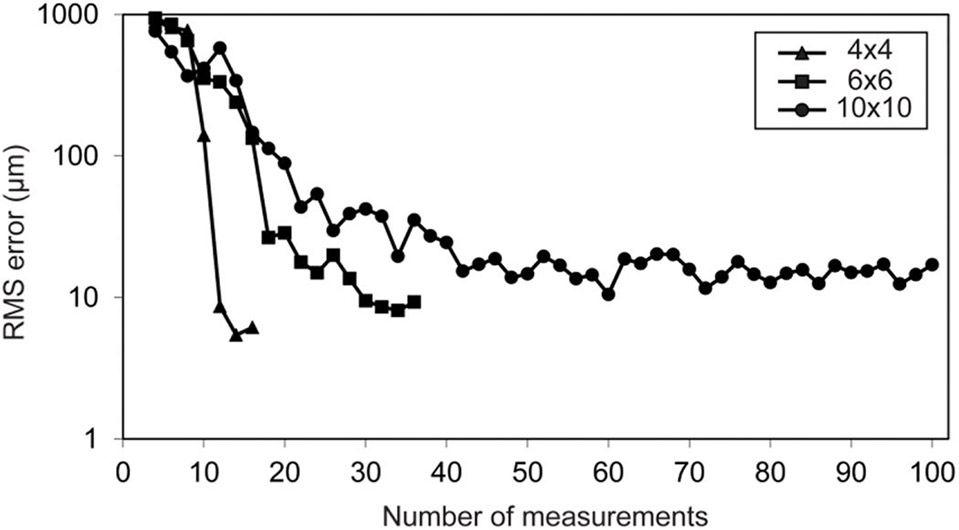 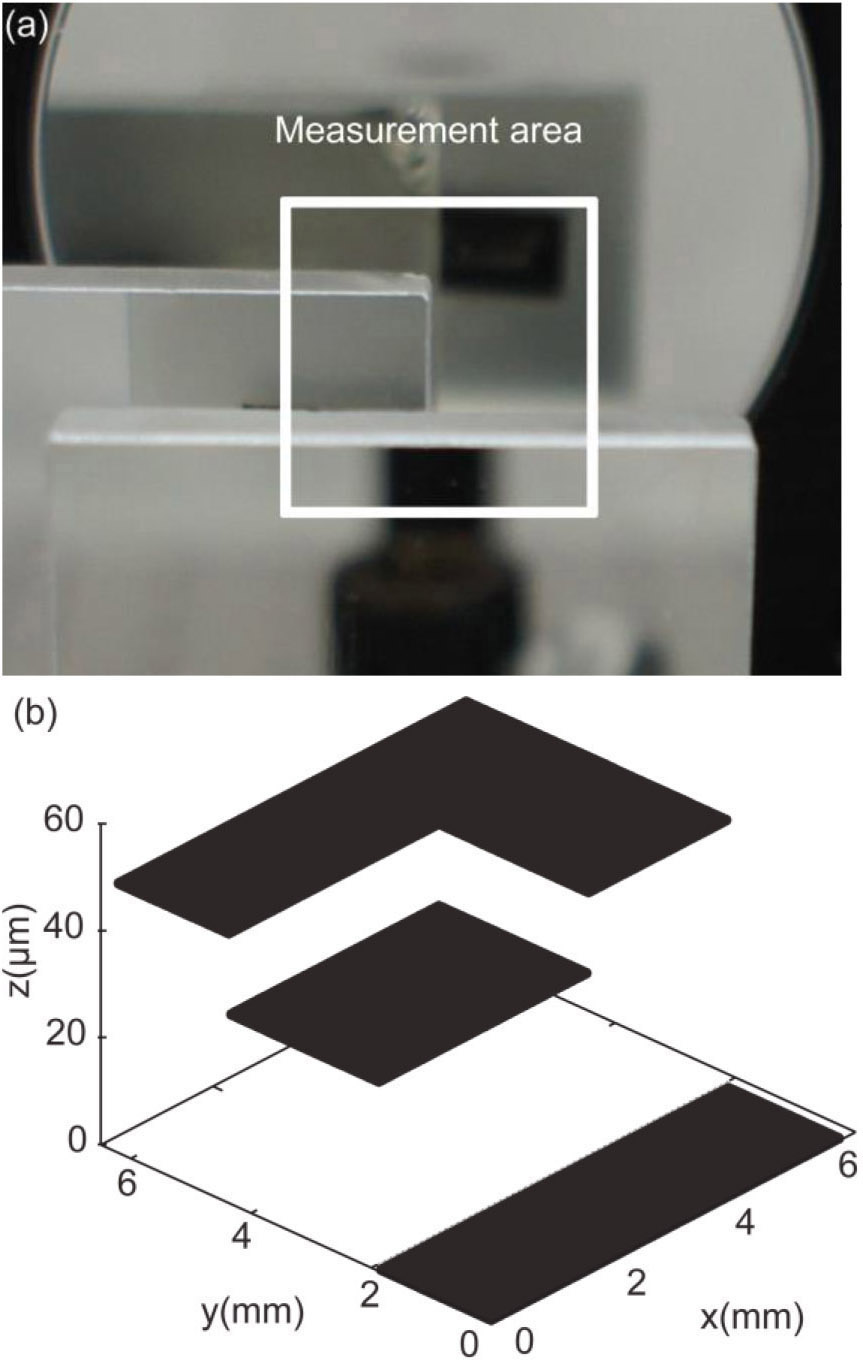 Figure 3. (a) An object composed of three plane mirrors located at different positions. (b) The measured surface profile of the object shown in (a), obtained from 10×10sample points.

We have developed a new method to measure an object's surface profile. By using an optical frequency comb we are able to measure large-depth objects with high axial dynamic range. Our measurements are made with submicrometer to micrometer accuracy, over centimeter to meter depth variations. Imaging can be conducted without mechanical scanning due to the inclusion of a single-pixel camera, and the CS technique means that profile reconstructions can be made with few measurements. The number of sampling points in our technique can be changed easily, up to the number of pixels in the SLM. In the future, we aim to improve the SLM contrast and the axial dynamic range of the system. We are also developing a more efficient data acquisition process so that the number of measurements required can be further reduced.