In the technique of terahertz (THz) time-domain spectroscopy, the amplitude and phase of short-pulsed incident THz (i.e., 1012Hz) radiation are sensitive to a sample's material properties. Imaging systems that use THz time-domain spectroscopy are attractive for novel nondestructive testing (NDT) applications.1 The spatial resolution of such systems, however, has so far been limited by the wavelength of the THz radiation, which is about 300μm at 1THz.

A laser-THz emission microscope (LTME) has been proposed and developed for NDT of semiconductor devices, such as large-scale integrated circuits and solar panels.2–4 The spatial resolution of the laser-THz emission technique is not limited by the THz radiation wavelength, but by the wavelength of the femtosecond (i.e., 10−15s) laser that is used to generate the THz radiation. This means that higher spatial resolutions can be achieved using an LTME than with a conventional THz imaging system.

We have developed a THz chemical microscope (TCM) that can be used to visualize chemical and/or electrical potential shifts caused by chemical reactions.5, 6 Our TCM has a sensing plate that is made of thin silicon dioxide (SiO2) and silicon (Si) films on a sapphire substrate, as shown in Figure 1(a). When a femtosecond laser pulse travels through the substrate and hits the thin Si film, a THz pulse is generated and radiates into free space.

As a chemical reaction progresses on the sensing plate, the chemical and/or electrical potential at the surface of the plate shifts. This causes a change in the magnitude of the local field and results in variation of the generated THz pulse's amplitude. The THz pulse contains information about the chemical reaction at precisely the point it is illuminated by the laser pulse. We are therefore able to create a map of the chemical reaction by scanning the laser across the surface of the sensing plate. The spatial resolution of our TCM is currently about 50μm, but this can be improved by optimizing the aperture of the objective lens. A photograph of our prototype TCM is shown in Figure 1(b). 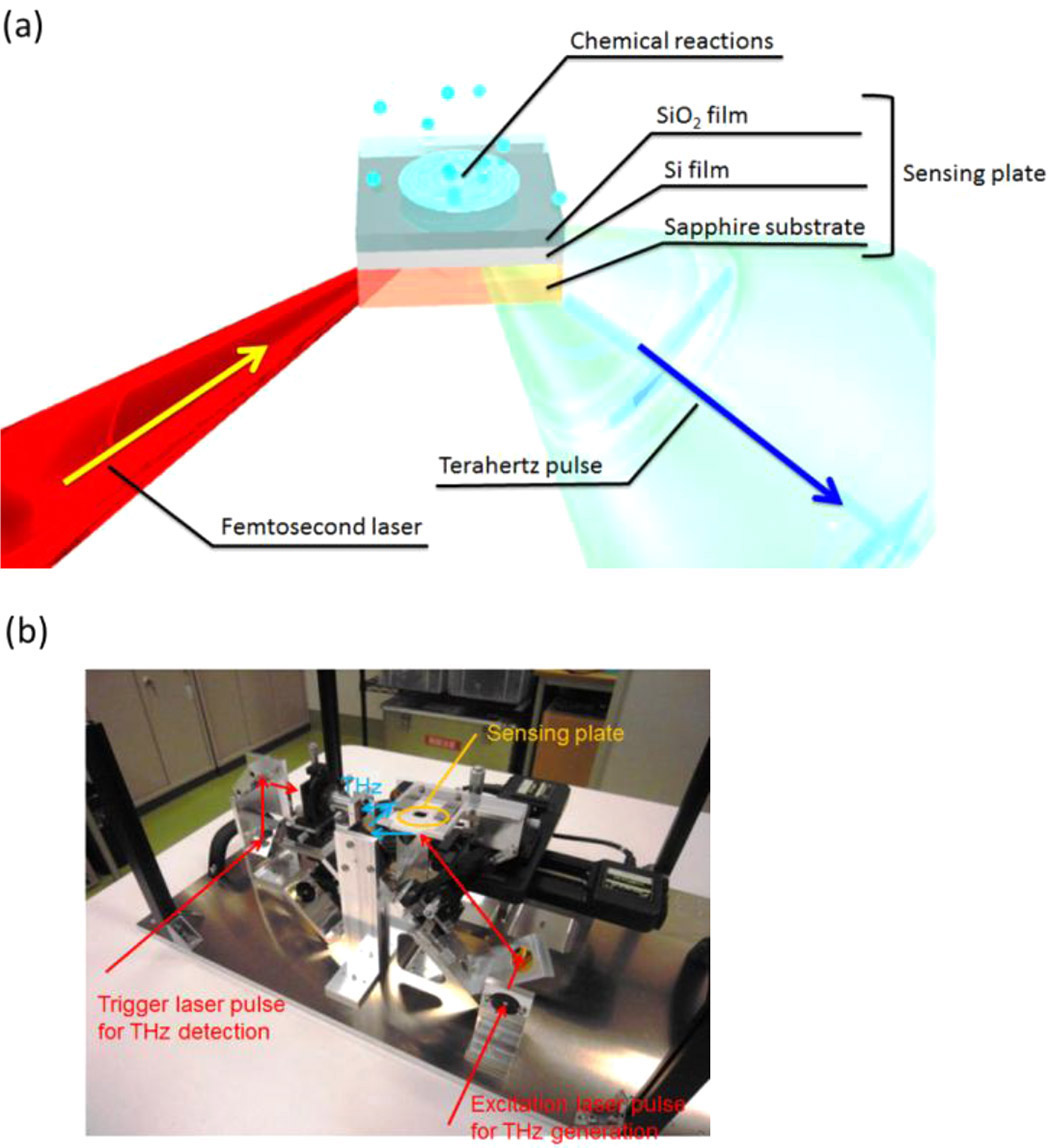 Figure 1. (a) Schematic diagram of the terahertz (THz) chemical microscope (TCM) sensing plate. A femtosecond laser is focused on the thin silicon (Si) film from the substrate side of the plate, and a THz pulse radiates into the free space. (b) Photograph of the prototype TCM system. SiO2: Silicon dioxide.

An image of an immune reaction that we obtained with our TCM is shown in Figure 2. During this reaction, mouse immunoglobulin G (IgG), at a concentration of about 275nmol/L, was initially immobilized by being covalently bound to the sensing plate. Anti-mouse-IgG (also with a concentration of 275nmol/L) was then reacted with the IgG on the sensing plate. We obtained a TCM image by measuring the shift in the THz pulse amplitude before and after the reaction. The image in Figure 2 shows that the THz pulse was enhanced at locations where IgG–anti-IgG bindings formed. Unlike conventional immunoassays (biochemical tests), the sensitivity of our TCM is independent of the sample material's molecular weight. We were able to detect small molecules (e.g., biotin) that are generally difficult to measure using conventional methods. Our results indicate that the TCM system can be used to perform label-free immunoassays.7 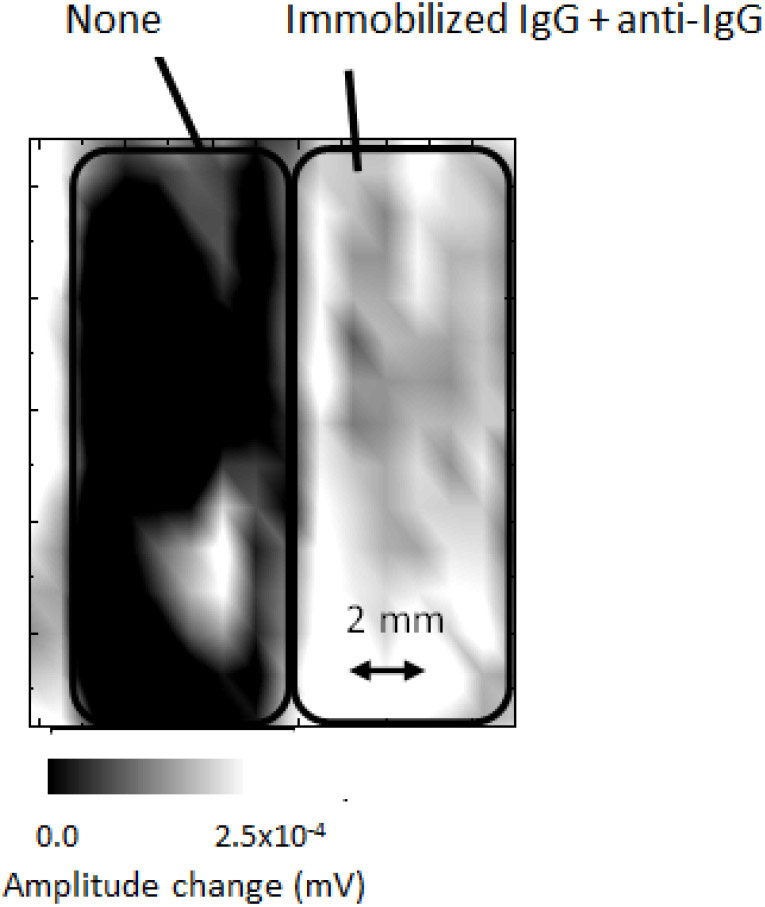 Figure 2. TCM image of the reaction between mouse immunoglobulin G (IgG) and anti-mouse-IgG.

Our TCM can also be used to detect ions (e.g., potassium, K+, and sodium, Na+) in water solutions: see Figure 3(a). A difference in electrical potential arises between membrane surfaces when the sensing membrane (on the sensing plate) comes into contact with the water solution containing the specific ions. This causes a change in the amplitude of the THz pulse. Figure 3(b) shows the TCM image we obtained when the concentration of sodium ions in a water solution was changed from 10−4mol/L to 10−1mol/L. The amplitude of the THz pulse increased at the points where the sensing membranes for Na+ ions were immobilized. 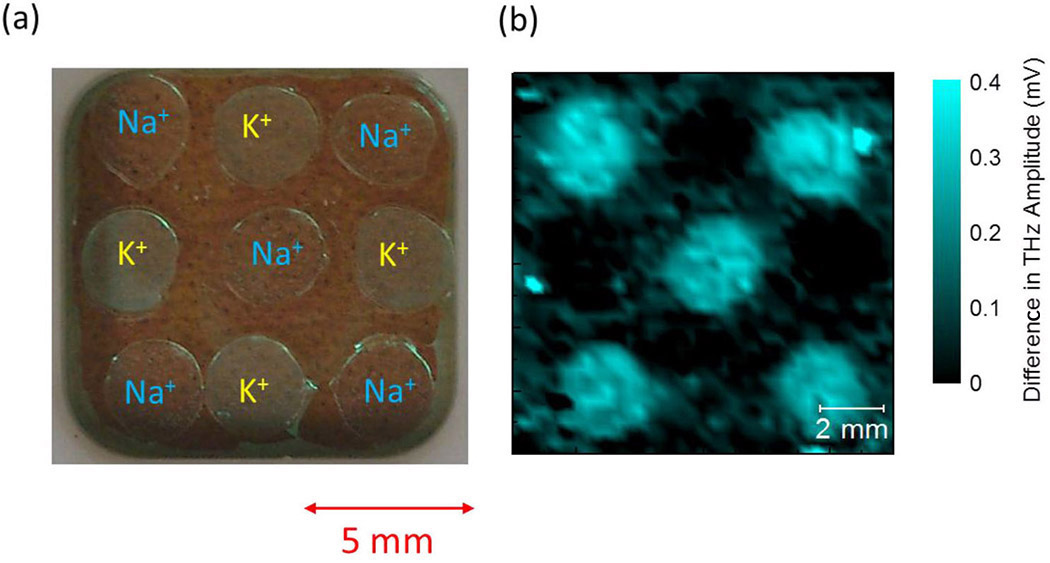 Figure 3. (a) Photograph of the TCM sensing plate, with immobilized sensing polymer membranes for sodium (Na+) and potassium (K+) ions. (b) TCM image obtained when the concentration of Na ions in the water solution on the sensing plate was changed from 10−4mol/L to 10−1mol/L.

We have designed and developed a TCM instrument that can detect several types of chemical reactions. Many different materials can be detected with a single scan of a femtosecond laser on a 10mm2 sensing chip. We are currently working to integrate biomaterials on a single chip. The TCM technique will be a useful screening tool, with applications in medical diagnosis and materials research. We are also developing fuel cells that will be mounted on the sensing chip so that catalytic reactions of their electrodes can be measured.

This work was partly supported by an Industry-Academia Collaborative R&D grant from the Japan Science and Technology Agency.

Toshihiko Kiwa is an associate professor. He received his PhD from Osaka University in 2003. He subsequently worked as a JSPS fellow at Osaka University's Research Center for Superconductor Photonics. His research interests include THz-sensing systems.

Kenji Sakai is an assistant professor and is involved in the research of magnetic sensors and superconducting quantum interference devices (SQUIDs) and their applications, nondestructive evaluation systems, and gas sensors. He was a research fellow of the Japan Society for the Promotion of Science between 2009 and 2010.

Keiji Tsukada is a professor whose research deals with hydrogen gas, ion, and magnetic sensors, as well as SQUIDs and their applications. From 1982 to 2003 he worked at the central research laboratory of Hitachi Ltd., where he was a project leader of the SQUID application research group.