At present, there is great demand for novel computing devices and architectures that can overcome the limitations of conventional technologies based solely on electron transfer, including the need to reduce energy consumption and solve computationally demanding problems. In particular, conventional digital computers have difficulty in dealing with intractable problems in which the number of possible solutions increases exponentially as a function of the problem size (referred to as ‘combinatorial explosion’). It is also challenging for conventional computers to make efficient and adaptive decisions in the uncertain, dynamically changing environments seen in real-world applications.

A promising solution is near-field nanophotonics, which has been extensively studied with the aim of unveiling and exploiting light-matter interactions that occur at a scale below the wavelength of light. Recent progress made in experimental technologies—both in nanomaterial fabrication, such as quantum dots (QDs), and in characterization—is driving further advancements in the field. We have shown that the dynamics of optical energy transfer mediated by near-field interactions can be exploited to solve solution-searching and decision-making problems.1–4 This suggests that computing systems based on near-field nanophotonics may one day be able to exhibit intellectual abilities. 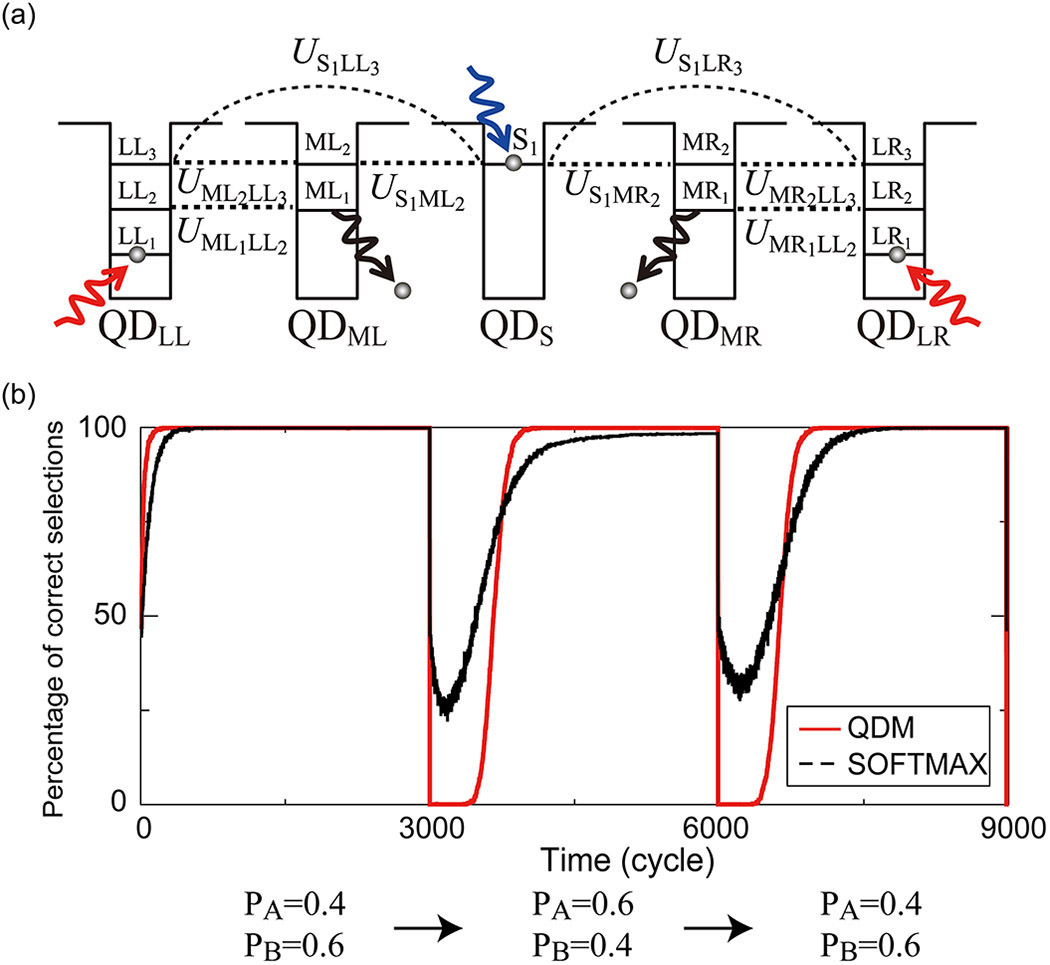 Figure 1. (a) Quantum-dot-based decision maker (QDM) consisting of five quantum dots (denoted QDLL, QDML, QDS, QDMR, and QDLR) interacting via optical near-fields. The subscripts 1, 2, and 3 denote the (1,1,1), (2,1,1), and (2,2,2) energy levels, respectively, while U represents the various optical near-field interactions. (b) Quick adaptation of the QDM to a dynamically changing environment, which in this case is the change of reward probabilities between two slot machines (PA and PB). Softmax: Best conventional algorithm.

When QDs share common resonant energy levels mediated by optical near-field interactions, optical energy is transferred from smaller QDs to larger ones. This process has been experimentally demonstrated in various quantum nanostructures, such as those fabricated in indium gallium arsenide, zinc oxide, and cadmium selenide. In addition, we have shown this transfer of optical energy to be 10,000 times more energy efficient than that of the bit-flip energy required in conventional electrically wired devices.1

When the smaller QDs are surrounded by the larger dots, the optical energy transfer dynamics varies depending on state-filling effects occurring at the larger destination QDs. By introducing simple state-filling mechanisms for controlling the energy-transfer dynamics in networked QDs, we have successfully solved a constraint satisfaction problem, the satisfiability problem (SAT), and the multi-armed bandit problem (BP). We attribute the emergent intellectual abilities of these near-field nanophotonic systems to the fact that the energy-transfer processes are fundamentally probabilistic. In fact, a wide variety of solution-searching dynamics, which are useful for exploring broad state spaces in an efficient and adaptive manner, are inherently observed in stochastic energy transfer processes that exhibit different spatiotemporal patterns depending on the simple state-filling-based control mechanisms.2–4 In other words, we can exploit fluctuations in optical energy transfer, rather than suppress them, by controlling the QDs' environment.

The SAT, a computational problem to judge whether a given logical proposition is self-consistent, is related to a diverse range of important applications, such as combinatorial optimization, artificial intelligence, information security, and bioinformatics. SAT is a nondeterministic polynomial time problem thought to be computationally intractable for conventional digital computers. Indeed, even when we compute this problem using one of the fastest-known stochastic local-search algorithms, WalkSAT,3 the time required for finding a SAT solution grows exponentially as a function of the problem size N . We have shown that our QD-based solution-searching model, with one smaller QD surrounded by 2N larger QDs, is several orders of magnitude faster than WalkSAT.

The BP is a computational problem that considers a situation in which a player should make a quick and accurate decision to choose the slot machine, out of many, that has the highest probability of paying out a reward. To do this, the player should gather information to determine which machine is the best, without failing to exploit the reward from the best machine. These incompatible requirements pose a trade-off between ‘exploration’ and ‘exploitation.’ Moreover, the best slot machine may be dynamically switched. In fact, BP is equivalent to many crucial application problems in information and communications technology, such as frequency assignment in cellular phone networks or Web-content optimization. By using near-field nanophotonics, we have demonstrated that our QD-based decision-making model—see Figure 1(a)—is more efficient and adaptive than the best conventional algorithm, called Softmax, which mimics the human decision-making strategy: see Figure 1(b).4

We emphasize that the proposed computing systems are based on both coherent and dissipative processes on the nanoscale, which marks a sharp contrast with conventional optical, electrical, and quantum-computing paradigms. The inherently nonlocal nature is also a unique attribute provided by the energy-transfer dynamics mediated by optical near-fields. Our work has paved the way to applying near-field nanophotonics to solving computationally demanding applications and has offered the possibility of a new computing paradigm, leading to a new dimension in the field of nanophotonics. In the future, in addition to focusing on computing and decision-making problems, we intend to apply our idea to photonic device fabrication and material formation.

Makoto Naruse received his PhD from the University of Tokyo in 1999. He later worked as a researcher and an assistant professor at the same university, before moving to NICT in 2002. In addition to his position at NICT, he worked as a researcher with the Precursory Research for Embryonic Science and Technology (PRESTO) program at the Japan Science and Technology Agency from 2001 to 2005 and as a visiting associate professor at the University of Tokyo from 2006 to 2011.

Masashi Aono received a PhD degree from Kobe University in 2004. From 2004 to 2013, he served as a research scientist at the RIKEN Advanced Science Institute in Japan. Since November 2013, he has been an associate professor of the Earth-Life Science Institute, Tokyo Institute of Technology, serving concurrently as a PRESTO researcher. His research interests include nonlinear dynamical systems, complex systems, biological systems, and their application to computing and communication systems.

Song-Ju Kim received MSc and PhD degrees in physics and applied physics from Waseda University, Japan, in 1997 and 2001, respectively. From 2000 to 2002, he was a research fellow of the Advanced Research Institute for Science and Engineering at the same university, having moved to NICT in 2002 where he worked until 2008. From 2008 to 2013, he was a research scientist at RIKEN. Currently, he works at the NIMS International Center for Materials Nanoarchitectonics.