Zinc oxide (ZnO), indium tin oxide (ITO), and titanium dioxide (TiO2) have wide bandgaps (the ‘energy gap’ in a solid that defines its electrical conductivity) and are highly effective materials for electronic/optoelectronic and chemical device applications.1–3 The oxides are characterized by low-dimensional (0D, 1D, and 2D) nanostructures and architectures, including nanorod arrays (NRAs), submicrorod arrays (SMRAs), and cone-shaped subwavelength nanostructure arrays (SNAs). These features exhibit superior optical and morphological properties not observed in bulk materials, due to quantum size effects. Such nanostructures have potential for high-performance novel electronic and optoelectronic devices.

ZnO nanostructures have a rich variety of morphologies with significant optical, electrical, mechanical, and piezoelectric features,4 and it is possible to fabricate hierarchical examples using a 3D template. For example, urchin aggregation-shaped ZnO architectures can be prepared by growing the ZnO NRAs on silica microspheres (see Figure 1).5 Considering finite-difference time-domain calculations, we expected these nanostructures (ZnO NRAs on microspheres) to provide efficient diffuse light scattering, dependent on the size of the spheres and the angle at which the NRAs bent. We grew nanorods on monolayer arrays of silica microspheres (970nm in size) and achieved a transmittance haze ratio (the ratio of total transmittance to diffuse transmittance) of >70% at wavelengths of 400–900nm, while maintaining high total transmittance. This diffuse light scattering enhancement may contribute to efficient light trapping, offering the potential to improve the performance of thin-film silicon solar cells. 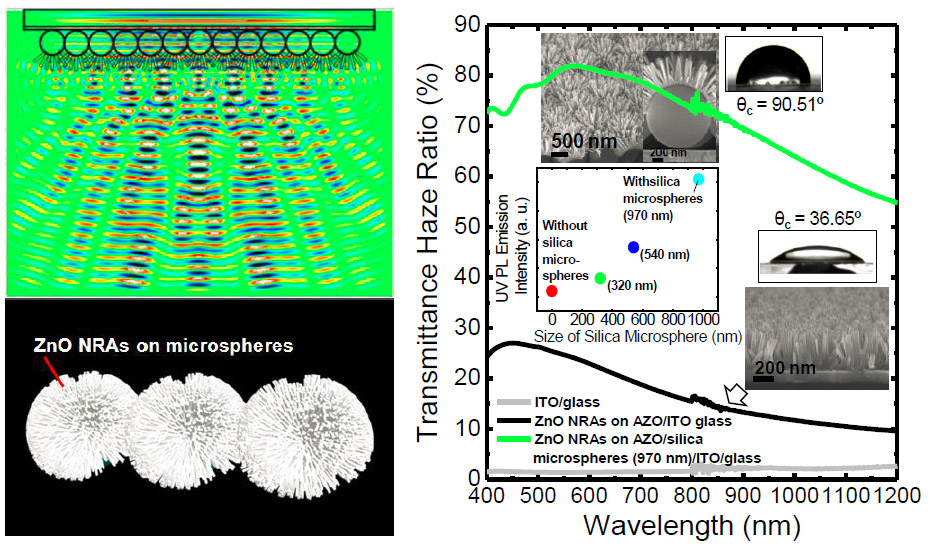 To grow the ZnO NRAs on silica microspheres, we layered aluminum-doped ZnO (AZO) as a seed layer over the surface of microspheres by radio-frequency magnetron sputtering. Using a hydrothermal technique, we aligned the ZnO nanorods vertically on the surface of the seed layer in line with the c-axis direction of growth in wurtzite crystal structures. The urchin aggregation-shaped ZnO architectures then formed on the transparent substrate. For these nanostructures on silica microspheres, we also observed enhanced UV photoluminescence (PL) intensity and their hydrophobic surface properties.5 We noted high UV PL emission intensity, owing to the increased intensity of the ZnO NRAs on silica spheres. In comparison with the ZnO NRAs without the spheres, the UV PL emission intensity was 4.26 times greater. Additionally, the modified surface of the urchin aggregation-shaped ZnO architectures changed the contact angle (θc) from 36.65 to 90.51°.

Piezoelectric charge generation occurs when the ZnO NRAs are deformed by an external influence. The surface morphology of ZnO SMRAs (which are relatively large and are more closely packed together than in ZnO NRAs) creates a rough surface on a gold film electrode, which readily bends each ZnO nanorod (see Figure 2).6 From the theoretical calculation for the strain distribution of piezoelectric nanogenerator (NG) structures, it seems highly possible that such rough gold film can transfer the mechanical force to the side and edge parts of ZnO NRAs because they are bent with a large radius. We observed that output current density was enhanced 1.54 times in the piezoelectric NG with a very rough gold top electrode.

When we deposited gold on the discrete surface of ZnO SMRAs using thermal evaporation, the nanoparticles grew larger at the top surface of the arrays because of the coarsening, forming a highly rough gold top electrode. Under compression, we induced positive and negative potentials at the stretched and compressed sides of ZnO NRAs, respectively, and electric charges flowed from the ZnO to the top electrode. The rough surface of the electrode increased the output current because it could efficiently bend the ZnO NRAs with a large radius. Compared with a gold film deposited on bare polyethylene terephthalate, the piezoelectric NG with the rough surface top electrode improved output current density by 1.54 times under the same external force of 0.9kgf. This fabrication process is simple and cost-effective enough to improve the performance of piezoelectric NGs because the ZnO NRAs and SMRAs can be prepared in the same way, without additional processes.

A further method to increase light absorption in solar cells is to use moth eye-inspired gallium arsenide or silicon subwavelength grating structures (SWGs), which suppress surface reflection losses. The geometry of SWGs provides a continuously graded effective refractive index profile (GRIP) when the period of the SWGs is smaller than the wavelength of incident light. The GRIP considerably reduces the reflection loss between the air and the substrate because of the change in refractive index. Moreover, wide-bandgap metal oxide SWGs can offer highly transparent substrates or windows for optoelectronic device applications. In our work, we fabricated AZO SNAs by laser interference lithography and dry etching processes and applied these as a top layer on gallium nitride (GaN)-based LEDs to enhance their light extraction (see Figure 3).7 From rigorous coupled-wave analysis, we reduced the internal reflection loss to 5% at the wavelength of 525nm for indium gallium arsenide (InGaN)/GaN multiple quantum well green LEDs when the period of the AZO SNAs was less than ∼320nm. Compared with the conventional LED (with only an ITO top layer), the light extraction efficiency with AZO SNAs was enhanced by ∼19% at 100mA of injection current and 300K of temperature. Also, the far-field radiation angle and intensity distribution were wider and increased for the overall angular position.

In summary, the unique optical and morphological properties of wide-bandgap metal oxide nanostructures used in multifunctional materials are advantageous for optoelectronic and energy device applications. For example, urchin aggregation-shaped ZnO architectures induce diffuse light scattering while keeping a high total transmittance, which is promising for improving the light-trapping properties of thin-film silicon solar cells. The novel surface morphology of ZnO SMRAs is favorable for forming a highly rough top electrode, which bends the ZnO nanorods of piezoelectric NGs and leads to an increase in output current density. Furthermore, AZO SNAs can be employed as a top layer for LEDs to increase light-extraction efficiency.

In future work, we will develop a fabrication method for integrating the ZnO nanostructures onto textile or polymer substrates for use in wearable, flexible, or stretchable optoelectronic and energy devices. We will also extend the studies on the wide-bandgap semiconductor nanostructures by incorporating TiO2, tin dioxide, and cerium(IV) oxide.

Financial support for this work came from the Basic Science Research Program through the National Research Foundation of Korea funded by the Ministry of Science, ICT, and Future Planning (2013-010037) and a grant from the Ministry of Knowledge Economy of the Republic of Korea, under project 10039151.

Jae Su Yu is director of the Institute for Laser Engineering. His main research interests are optoelectronic and nano semiconductor devices.