Fluorescence has been an intriguing optical signal for centuries. It occurs when an excited atom, molecule, or nanostructure relaxes to its ground state by emitting a photon. It has many applications, including labeling,1 sensing,2 detection, and most commonly, lighting. The fluorescence lifetime of the interrogated fluorophores is highly sensitive to their immediate environment. As a result, fluorescence lifetime imaging microscopy (FLIM) of dyes used to label cells can reveal important biological information, such as cytoplasm matrix viscosity, pH, and cellular metabolism.3

Fluorescence is spontaneous, though an excited fluorophore may also release its energy through stimulated emission or nonradiative transition. Efficient collection of fluorescence usually requires high numerical aperture (NA) optics, which cover a greater solid angle to capture photons effectively. However, this limits the working distance and the depth of focus accordingly, which, in turn, limits the observation size of the targeted objects.

In comparison, stimulated emission (SE) is usually associated with the working mechanism of lasing, in which an excited fluorophore, induced by an external electromagnetic field, transfers its energy to the field. The new photon thus created has the same phase, frequency, polarization, and direction of travel as the photons of the external field, i.e., is coherent with them. Figure 1 and Table 1 compare the mechanisms and qualities of fluorescence and SE. Recently, SE has been harnessed to acquire fluorescence lifetime data,4 improve the spatial resolution of micrographs,5 interrogate dark fluorophores,6 and detect fluorophores over a long working distance.7–9

The working principle of SE-based fluorescence detection is to induce the electronic transition of an excited fluorophore into SE before its energy dissipates through other radiative or nonradiative decay processes. Therefore, the SE signals depend on both the population of the excited states and the intensity of the stimulation beam. Without any saturation effects, the SE signal scales linearly with both excitation and stimulation beams, which gives it an overall quadratic power dependence and, when used in imaging microscopy, the ability to provide 3D optical sectioning.

In previous work, we established SE-based detection in long-working-distance settings by implementing the method of pump-probe with lock-in detection.6 The pump-probe scheme can easily be appropriated for other applications. Specifically, we introduced an electronic delay between the pump and the probe beams to acquire and reconstruct fluorescence lifetime images. When compared with other techniques, such as frequency domain methods, time-correlated single photon counting, and using a gated camera, SE-based pump-probe FLIM is simple, cost-effective, and straightforward.

However, a common issue with SE detection and microscopy is that the relatively weak alternating current (AC) signal is embedded in a strong stimulation beam that is identical in wavelength, polarization, and pulse shape, and hence is difficult to separate out. The detector is frequently saturated, resulting in a poor signal-to-noise ratio (SNR). More recently, we have used destructive interference to reduce the high direct current (DC) background signal from the stimulation beam, thus increasing the SNR.13 The experimental setup, which uses a Michelson interferometer to generate destructive interference, is shown in Figure 2. 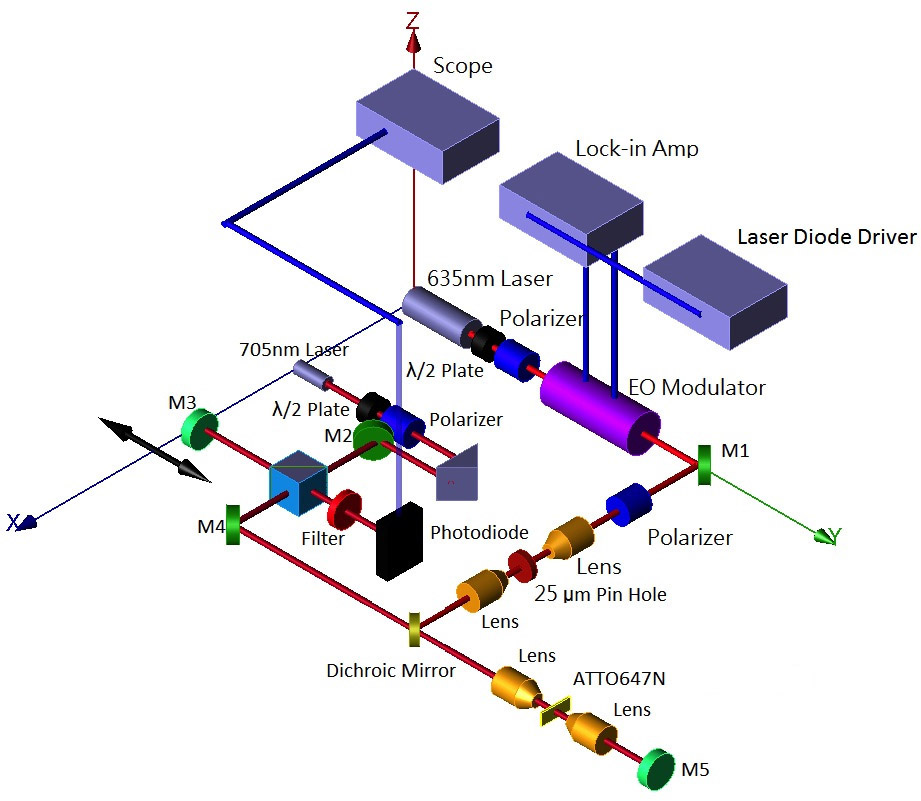 Figure 2. Experimental setup for the interferometric enhancement of fluorescence detection based on SE. A 635nm, 100ps, 40MHz semiconductor laser is used as the pump beam. Another semiconductor laser of comparable pulse width and repetition rate at 705nm is used for the probe beam. A Michelson interferometer is set up for the 705nm beam. A Pockels cell serves as the electro-optical (EO) modulator to modulate the intensity of the excitation beam. ATTO647N: Dye of various concentrations.10–12 M1–5: Mirrors. λ/2 Plate: Half-wave plate. Amp: Amplifier.

The interference method reduces the DC signal but not the SE signal, and we were able to reduce the stimulation beam power from 2mW to 0.2mW, which greatly improved the detection limit. Without the interferometric setup, the lowest detectable dye concentration is approximately 10μM (see Figure 3), which is not sufficient for practical applications, such as detecting labeled cultured cells, which typically contain a dye concentration of less than 10μM. By contrast, with the interferometric setup, the lowest detectable concentration is less than 1μM. 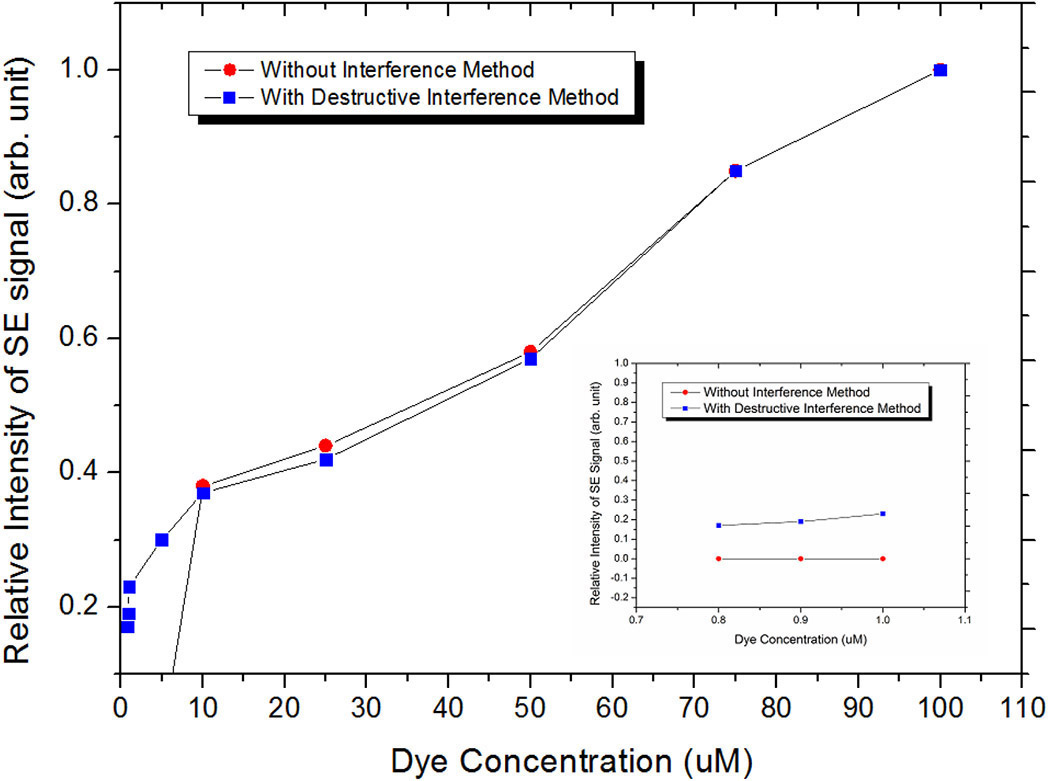 In summary, we have used stimulated emission to detect fluorescence through stimulated emission, which also converts the incoherent and spontaneous fluorescence signal into a coherent one. The use of interferometry greatly improves the SNR by reducing the DC background signal. We are now developing the technique's potential for high-resolution 3D biological imaging by optical coherence tomography, using fluorescence as a viable and unique contrast. In principle, the technique can also be extended to lidar and projection tomography for high-resolution 3D biological imaging.

Shen-Shou Max Chung is a technical staff member. He obtained his PhD in electrophysics at Polytechnic University, New York, in 1993.

Jia-Hui Deng obtained her master's degree in 2013 from the Institute of Biophotonics Engineering.

Fu-Jen Kao is a professor working on optical microscopy and related applications. He obtained his PhD degree from the Physics Department of Cornell University in 1993.