Photon number resolving (PNR) detectors are extremely sensitive devices capable of registering and counting quanta of light, or photons. Existing PNR detectors are far from ideal, requiring cooling to near absolute zero to avoid very large false detection rates, and are the performance bottleneck in systems such as quantum computers, quantum key distribution, optical communication with high number of bits per photon, and optical tomography. Many applications at the frontiers of science and engineering, including scalable quantum computing, detection and visualization of remote stars and nebulae, non-invasive diffused optical imaging, and optical coherence tomography (OCT) could benefit from high-performance imaging systems with PNR ability at short-wave IR (SWIR) wavelengths. For instance, the speed and depth of OCT, which produces 3D images of human tissue from minute reflections of photons, could be significantly enhanced.

The best existing SWIR PNR detectors are transition edge sensor (TES) superconducting detectors and semiconductor avalanche photodiodes (APDs).1–3 A TES is in principle a super-sensitive thermometer that can identify the heat signature of a single photon. An APD uses carrier avalanche multiplication to produce millions of carriers from the initial electron-hole pair generated by a single photon. Although there have been dramatic improvements in TES rates of false detection per second (dark count rates, DCRs) and detection efficiency, and also APD response speed over the past 10 years, neither can produce large imaging arrays. Their practical applications are limited by inherent properties of their constituent materials.

Despite having excellent PNR capabilities and the lowest dark count rates ever reported, the dead time (the time right after a photon detection, during which the detector cannot detect further photons) of TES detectors is limited by the thermal time constant of the detector element (∼1μs), and so their timing properties are relatively poor.1 Furthermore, they require extremely low operating temperatures (<100mK), which makes them expensive and limits their practical usefulness.2 APDs can address the temperature issue. Furthermore, the output of a ‘linear-mode’ APD is proportional to the number of incident photons and thus, in principle, it acts as a PNR detector. Unfortunately, the best reported linear APDs, made from mercury cadmium telluride alloy and known as MCT-eAPDs, have very large dark count rates.3,4

Over the past six years, we have developed a new approach—a so-called nano-injection detector—that is based on the principles of dim light detection by rod cells in the human eye.5 Photons are absorbed over the large volume of the rod cells, but the resulting chemical reactions are channeled toward nanoscale ‘current valves,’ which control the flow of current. This process allows quantum efficiency and sensitivity to be simultaneously high. A schematic diagram and a scanning electron microscopy image of an isolated nano-injection detector with a well-defined absorber volume are shown in Figure 1(a) and (b), respectively. 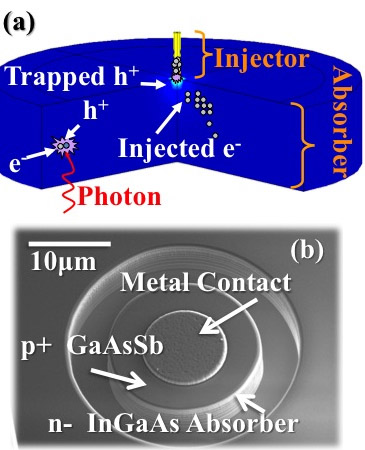 Under a low negative bias (about −0.5V), electrons are thermionically emitted from the highly doped InP injector over the GaAsSb barrier to the InGaAs absorption region. This current is limited by the saturation current of the reverse biased n−-InGaAs/p+-GaAsSb junction at higher negative bias voltages.

An electron-hole pair is generated in the thick absorber when a photon is absorbed. Under negative bias, the electron and the hole are separated and the hole becomes trapped in the GaAsSb trap layer for its lifetime. This leads to a large change of barrier potential, a large injection of electrons over the barrier, and large internal amplification for the device.5 Electrons passing over the GaAsSb barrier lower the local potential and increase the barrier height, opposing the flow of further electrons. This negative feedback mechanism results in a stable low noise internal amplification.6

The nano-injection detectors are highly scalable and have very low (CMOS-compatible) operating voltages. Furthermore, their high uniformity and almost bias-insensitive high-internal-gain (several thousands) characteristics make them suitable for integration into compact, large-format, high-pixel-density imagers. Our first-generation imager (in 2010) was hybridized with an off-the-shelf readout integrated circuit and compared with a high-performance commercial IR imager. The measured signal-to-noise ratio of the nano-injection imager was two orders of magnitude higher than the commercial SWIR camera: see Figure 2.6,7 However, the readout electronics were saturated at long integration time, due to the high dark current of the device. 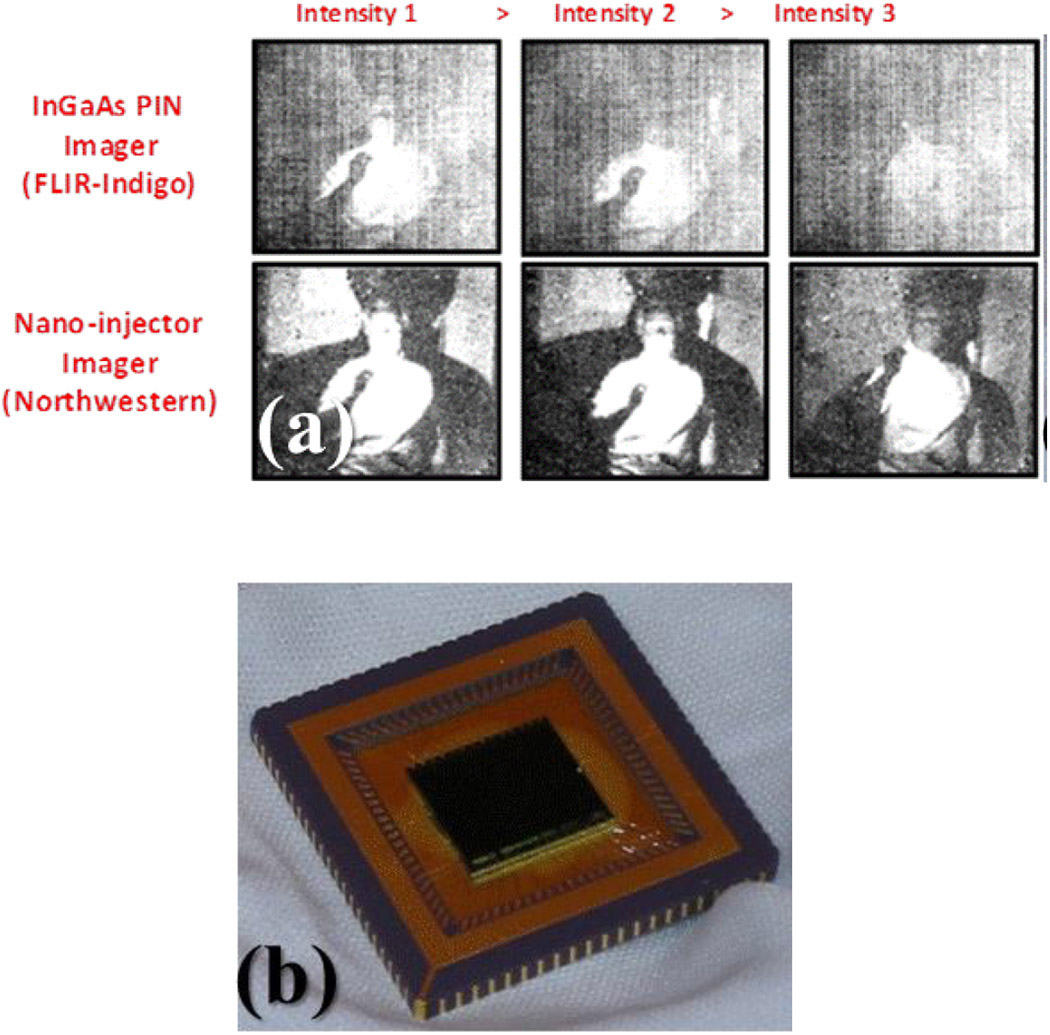 Recently, we have succeeded in reducing the dark current of our device by more than two orders of magnitude, making it superior to the state-of-the-art SWIR MCT-eAPD in terms of internal dark current density. This not only addresses the readout saturation issue but also produces extremely low internal noise.

We achieved this by developing a process to physically isolate individual detector active areas from neighboring devices without introducing surface damage. Furthermore, the injector is scaled with respect to the well-defined absorber: see Figure 1.8,9 There have also been substantial improvements in the fabrication steps and material growth.8, 9 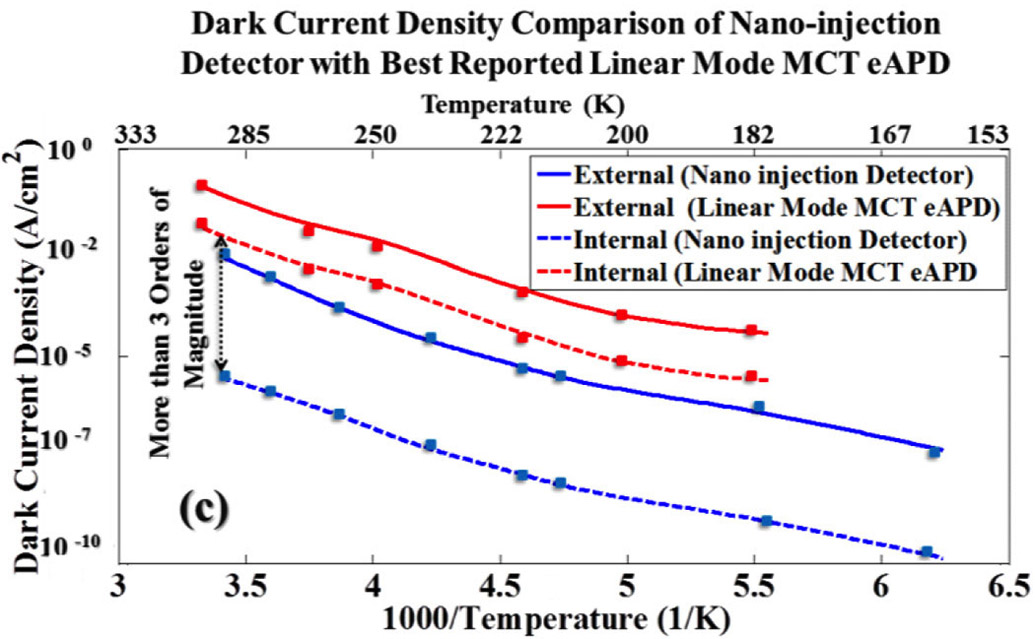 In summary, by redesigning the nano-injection detector structure, as well as improving the fabrication steps and material growth, we have recently achieved unprecedented reduction in the detectors' DCR. The predicted DCRs of a few hertz at 90% PDE, achievable at thermoelectric-accessible temperatures, makes these detectors a strong candidate for PNR applications. Our next goal is to make devices that are compatible with the indium bump-bonding process, which is required for making camera systems. We believe this could lead to the first large imaging arrays with high fill-factor and photon number resolving capability above cryogenic temperatures.

Hooman Mohseni holds a National Science Foundation CAREER Award and a Defense Advanced Research Projects Agency Young Faculty Award. He has published over 110 peer-reviewed articles in major journals, including Nature, Nano Letters, and ACS Nano. He holds 14 US and international patents. He is a Fellow of SPIE and OSA.