Recent findings suggest ‘rogue asteroids’ on a collision course with Earth are more abundant than previously thought.1, 2 Yet, at the time of writing, there is still no worldwide agreement regarding reliable means of preventing such collisions. Nuclear detonation might alter the course of such an asteroid, but useful methods to prevent collision will most likely include continuous monitoring and further optimization of the deflection process. Optical quantum energy in the form of energetic femtosecond optical pulses used in space offers such capabilities (see Figure 1). These pulses work by slowing down an asteroid for long enough, so that the Earth moving in its orbit passes unharmed through the location where the collision was otherwise expected to occur. The practical challenge is identifying and testing means of applying this optical quantum energy effectively. 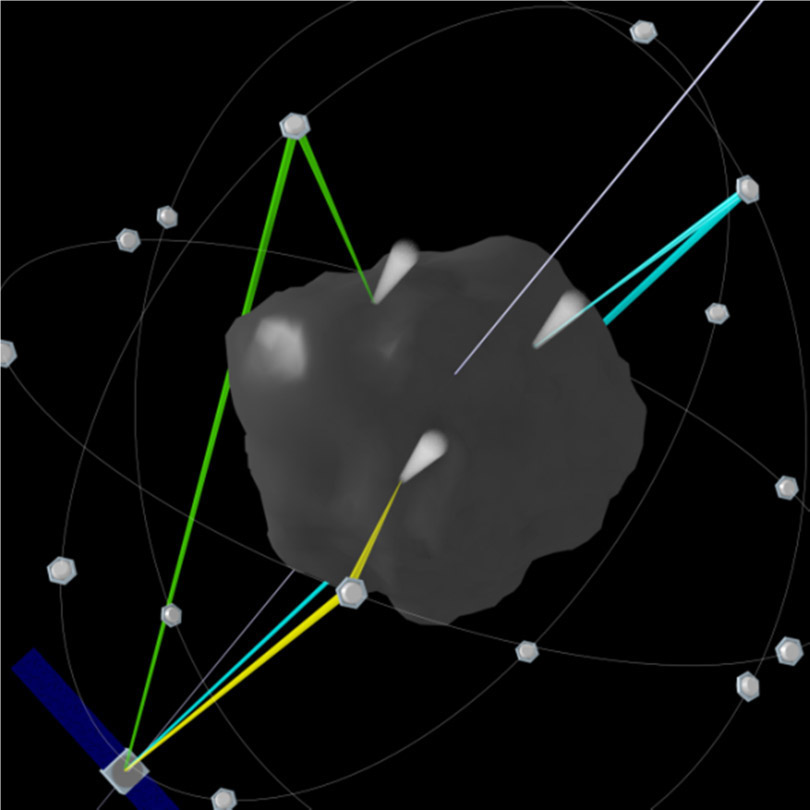 Energetic femtosecond optical pulses rapidly lose energy in the Earth's atmosphere, much like a meteor. However, in the vacuum of space such pulses are not attenuated. Moreover, in a low-gravity (or microgravity) environment, the delivery of these pulses can be optimized to approach near-unit-efficient application of energy to deflection. In addition, the asteroid supplies the large majority of the propellant required for the deflection event. Assuming we can regard the asteroid as isolated in vacuum and microgravity, we see the practical challenges in using optical quantum energy to deflect asteroids mainly as generating a sufficient number of well-synchronized energetic femtosecond pulses per unit time, and applying these pulses optimally to the deflection of the threatening asteroid.3

The need for both maximally efficient deflection and a large number of sites for applying the deflecting ablative impulses favors what we term a ‘cooperative delivery strategy.’ Figure 2 shows a cross-sectional view of an asteroid illustrating the simultaneous use of two femtosecond optical pulses causing ablative propulsive thrust at two symmetrically positioned, locally flat areas on an asteroid. These flat areas will typically be small (roughly 2×2mm) and, to good approximation, will have normal surface vectors parallel to the orbital path of the celestial body when the deflection occurs. Ideally, we will eventually find the means to prepare and optimize such areas in advance of, and throughout, the deflection event. 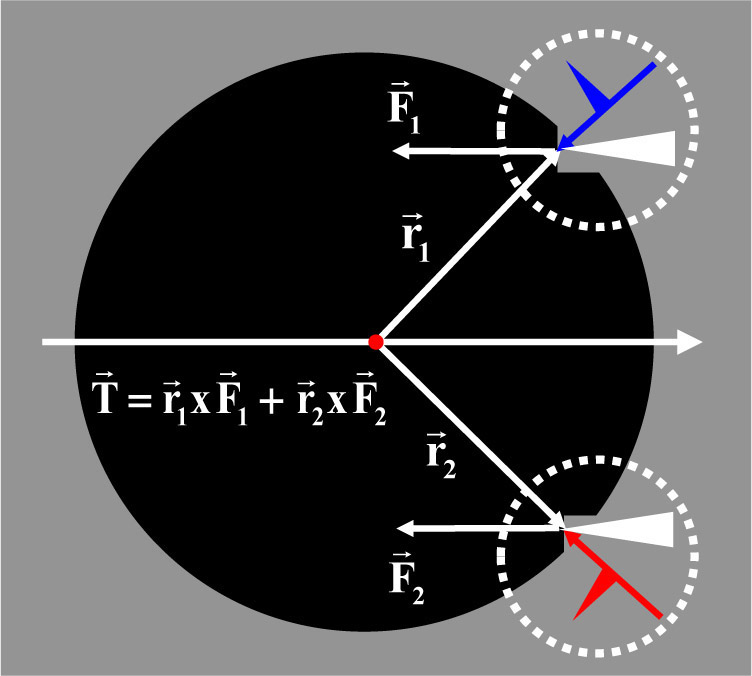 The reason for applying the deflecting thrust in this manner is that this method allows access to, and use of, a much larger number of ablation sites for maximally efficient propulsion.3 In Figure 3 we show the minimum possible deflection time for three different asteroid masses, which we calculated using the well-known relation F=2P/vej, where F is the force exerted, vej is the average velocity of the ejecta (which we take to be about 10,000m/s), and P is the average power.3, 4 Newtonian physics then gives the time required to delay the arrival of the asteroid at the predicted collision location by distance

. DE should be small enough to minimize the time needed for deflection, but large enough to make sure the asteroid is sufficiently delayed by our procedure so that when the Earth goes through the location in its orbit where the collision was anticipated to occur, the asteroid is still at a safe distance. Taking DE to be the diameter of the Earth, we find that our deflection technique could cause a 10,000MT ‘Chelyabinsk’ scale asteroid2 to arrive late for a predicted collision event by a distance equal to the planet's diameter by applying such a deflecting force for about four months, if we used femtosecond pulses with 10kW of average power. To our knowledge, this is considerably less time and power than required by any other deflection strategy. Figure 3. Time and power to delay, by a distance equal to the diameter of Earth, arrival of an asteroid of mass M at a predicted collision event.

There are other advantages to our method. This technique can be scaled to more massive asteroids simply by using larger numbers of mode-locked lasers, which can be synchronized to extreme precision.5, 6 Mode-locked femtosecond lasers used in the vacuum and microgravity of space offer both access to, and precise delivery of, optical energy with close to the minimum uncertainty and maximum efficiency allowed by physical laws.3 Researchers have also shown that there are benefits to using femtosecond pulses for ablation: less heat is left in the host and minimal melted material remains at the ablation site.7 This, and the delivery of the optical energy before emission of the optically absorbing ejecta, is highly advantageous. The optically absorbing ejecta are emitted with about a one picosecond delay after absorption of the femtosecond pulse.8

The approach we describe here requires laser systems located within a few kilometers of the asteroid to allow independent paths for multiple synchronized pulse trains. This avoids much of the difficulty and expense of safely routing high-power laser beams over long distances in space. We have also identified other systems using multiplexed synchronized mode-locked lasers where laser beams could be usefully transmitted over longer distances.9 These appear challenging to implement with adequate precision and safety for long-distance, high-average-power use, but might eventually become valuable, e.g., for spacecraft-to-spacecraft power distribution or for removal of small debris orbiting Earth.

We conclude that optical quantum phenomena used in the microgravity and vacuum of space access capabilities for defending Earth against threatening asteroids that are not otherwise realizable. In the future, we hope to be able to experimentally test our deflection method in terrestrial laboratory settings.

We thank the students in the most recent University of Alabama Huntsville (UAH) Laser Systems, Cooperative Quantum Energy, and related classes, and faculty members James Miller and Patrick Reardon, for valuable discussions. We acknowledge use of the freeware Blender, Analytical Graphics Inc. for access to Satellite Tool Kit, Synopsys Optical Solutions Group for Code V, and Breault Research for ASAP software. We thank the UAH administration and community for strong support and encouragement throughout our work.

Richard Fork holds a PhD in physics from the Massachusetts Institute of Technology. He was at AT&T Bell Laboratories for 27 years and worked at Rensselaer Polytechnic Institute as professor of physics for four years. He is currently a professor in electrical and computer engineering.

Spencer Cole is a graduate student at UAH.

Luke Burgess is a graduate student at UAH.

Grant Bergstue is a graduate student at UAH.