2D crystals, a relatively new type of nanomaterial, have drawn considerable attention over the past 10 years.1 These sub-nanometer crystals are composed of single layers of atoms or molecules and include carbon (known as graphene), the transition metal dichalcogenides, boron nitride, and many others. They represent a new source of nanomaterials with exotic properties that can vary greatly from their 3D counterparts. Moreover, it is possible to use these 2D crystals as building blocks in the fabrication of new 3D crystals by stacking them in particular orders, and aligning them in certain relative orientations. This possibility opens up a new path toward designing and inventing functional materials for electronic, information, and energy technologies.2

Although laboratory research can rely on mechanical exfoliation to produce high quality 2D crystals from bulk (the so-called scotch-tape method), scalable techniques are necessary for future applications. These techniques include chemical vapor deposition, molecular beam epitaxy, and chemical exfoliation. To aid in their development, fast, noninvasive, and in situ diagnostic tools that can detect the quality of the 2D crystals are required. Optical microscopy can be used for this purpose, but its application is limited to identifying monolayer flakes.

We have developed a nonlinear optical microscopy technique based on second harmonic generation (SHG). This technique can be used to identify monolayers (single-layer samples) with much higher contrast ratios on most substrates. Because this process is extremely sensitive to crystal symmetry, it can distinguish monolayers from bilayers (two-layer samples) with very high contrast. More importantly, the strong dependence of SHG on crystal orientation allows the crystal orientation of the sample to be detected, enabling the size of single-crystal domains of polycrystalline films to be determined.

We made our measurements using 2D crystals of a transition metal dichalcogenide, molybdenum disulfide (MoS2). Alongside graphene, MoS2 is one of the most widely studied 2D crystals, with potential applications in transistors and photovoltaics. We illuminated a flake of MoS2 on a silicon/silicon dioxide (Si/SiO2) substrate with a 5mW, 800nm, 100fs pulsed laser beam. The beam was focused to a spot size of ∼2μm, allowing selective study of various regions of the sample containing different numbers of atomic layers. Using a spectrometer and a camera, we were able to detect the generated second harmonic at 400nm. Figure 1 shows the detected power of the second harmonic as a function of the number of atomic layers. The contrast ratio between the monolayer and the substrate is at least 10,000, and the ratio between the monolayer and bilayer is about 1000. Hence, SHG can be used to effectively identify monolayers on any substrate without a large second-order susceptibility.3 Intense SHG has also been independently observed in similar 2D crystals by other groups.4–6 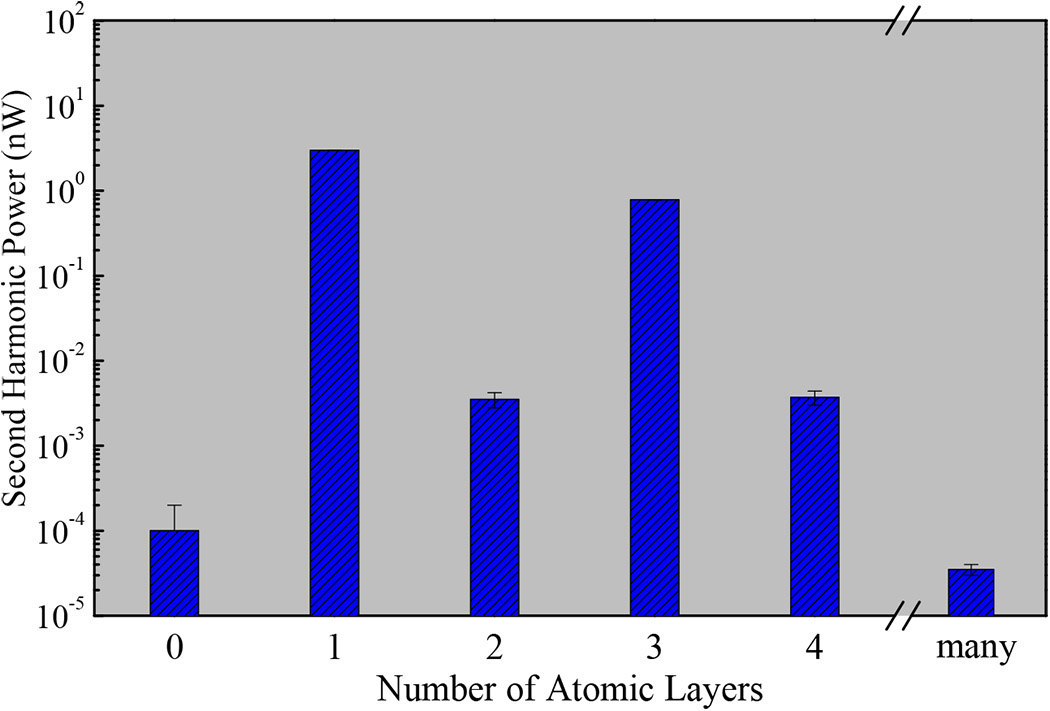 The dramatic difference in SHG between odd and even layers—see Figure 1—originates from their different symmetry properties. In particular, even layers of MoS2 possess inversion symmetry, which prohibits any second-order nonlinearity, including SHG. In odd layers, especially monolayers, the inversion symmetry is broken, allowing strong SHG. The symmetry of the monolayer lattice also allows detection of the lattice orientation. According to our measurements, with a linearly polarized incident beam, the second harmonic component parallel to the incident polarization is strongest when the zigzag direction (the line from one point in a 2D hexagonal lattice to its second-nearest neighbor) of the MoS2 lattice is along the polarization direction, while it becomes zero when the armchair direction (30° from zigzag) is aligned with the polarization.

To demonstrate the feasibility of using second harmonic microscopy to detect and monitor the quality and thickness of 2D crystals, we imaged triangular-shaped monolayer MoS2 flakes fabricated by chemical vapor deposition. Figure 2(a) shows three separated triangular flakes on an Si/SiO2 substrate obtained by linear optical microscopy. The second-harmonic image (the polarization component that is parallel to the incident linear polarization) of the selected area is shown in Figure 2(b). Clearly, the middle flake has a weaker signal, which is due to its having a different crystal orientation with respect to the light polarization. With longer growth time, these flakes may grow and merge into each other, forming a continuous polycrystalline film. Second harmonic microscopy can be used to detect different single-crystalline domains and determine the domain boundaries. 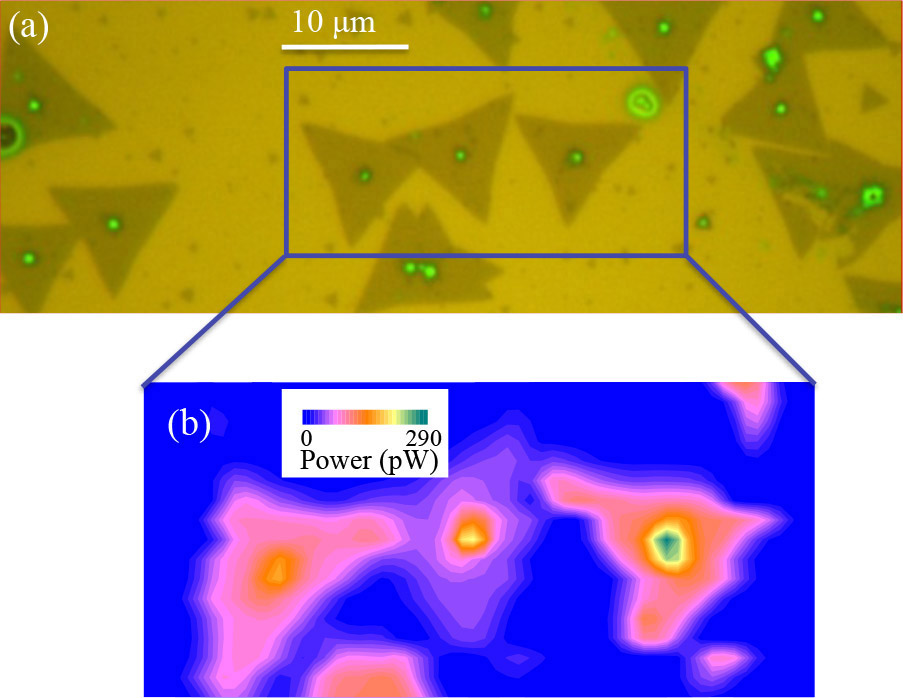 In summary, the observed strong SHG can be used for fast and noninvasive detection of 2D crystals that lack inversion symmetry. Exceptional contrast and the capability to distinguish different domains in polycrystalline films make this technique a powerful diagnostic tool that could aid in the development of scalable methods to fabricate 2D crystals on a variety of substrates. We intend to begin working with 2D crystal fabrication teams to implement this technique in the real world.

The research was supported by the National Science Foundation under award numbers DMR-0954486 and EPS-0903806.

Hui Zhao received his BSc and PhD in 1994 and 2000, respectively, from Beijing Jiaotong University. He is now an associate professor of the Department of Physics and Astronomy at the University of Kansas. His team focuses on ultrafast laser spectroscopy of semiconducting nanomaterials.