Two-dimensional materials (such as graphene and molybdenite) or different kinds of nanostructures (such as nanowires, nanoparticles, and nanoribbons) open new possibilities for novel electronic devices with as-yet-undiscovered properties. However, a major hindrance to building commercial devices out of these low-dimensional materials is the lack of a fast, effective, and controlled way to manipulate them during device processing. In this respect, electron-beam lithography and atomic force microscopy are increasingly important tools, but they require expensive equipment and often suffer from low fabrication throughput. The ability to align nanostructures in electronic devices in a bottom-up approach is therefore critical for increasing production capacity and commercializing these devices.

Zinc oxide (ZnO) nanowires have excellent properties that make them very attractive for applications such as white lighting, photovoltaics, UV photodetection, and gas sensing.1 In these structures, the surface charge is closely related to the conduction mechanism through the nanowire core. In other traditional semiconductor materials, such as silicon or gallium arsenide, the surface oxidation somehow passivates surface states through the formation of an amorphous oxide. In comparison to other metal oxide materials, ZnO is also attractive for its superior conductivity, especially when it is doped with group III elements such as aluminum or gallium.

Dielectrophoresis (DEP) is the use of a nonuniform electric field to exert a force on a dielectric (polarizable by an applied electric field) structure. We have used DEP to integrate nanowire structures into different substrates pre-patterned with metal electrodes separated by a few microns. The technique, first introduced by Pohl in the 1950s, has in recent years been used to manipulate and separate different types of particles.2–4 In this way, we have fabricated single- and multi-nanowire resistive sensors in a reproducible and controlled environment, allowing the thorough study of their electro-optical properties as a function of nanowire size.5 In addition, we have built a novel compact continuous flow system with the ability to control the frequency, amplitude signal, waveform, and flow speed, providing a wide range of DEP conditions for aligning nanomaterials.

By applying an alternating current signal between electrodes, we have shown that DEP traps nanowires suspended in ethanol at distances several times larger than the electrode spacing: see Figure 1. Once the nanowire material is polarized by the signal, it is attracted by the dielectrophoretic force toward the electrode gap in about a second or less, depending on its distance to the alignment site. Statistical analysis reveals that the DEP process preferentially attracts those nanowires with the smallest diameters. The thinner nanowires' smaller mass allows faster displacement, and they present less inertia to the torque needed to align them to the electrodes. Once trapped, the high mechanical stability of the nanowires allows further surface cleaning, which suggests that strong bonds form between the nanowire and the metal electrode. In contrast, sonication (that is, exposing to high-frequency sound waves) has been shown to break the nanowire-metal bond, freeing the electrode gap to begin the trapping process anew. 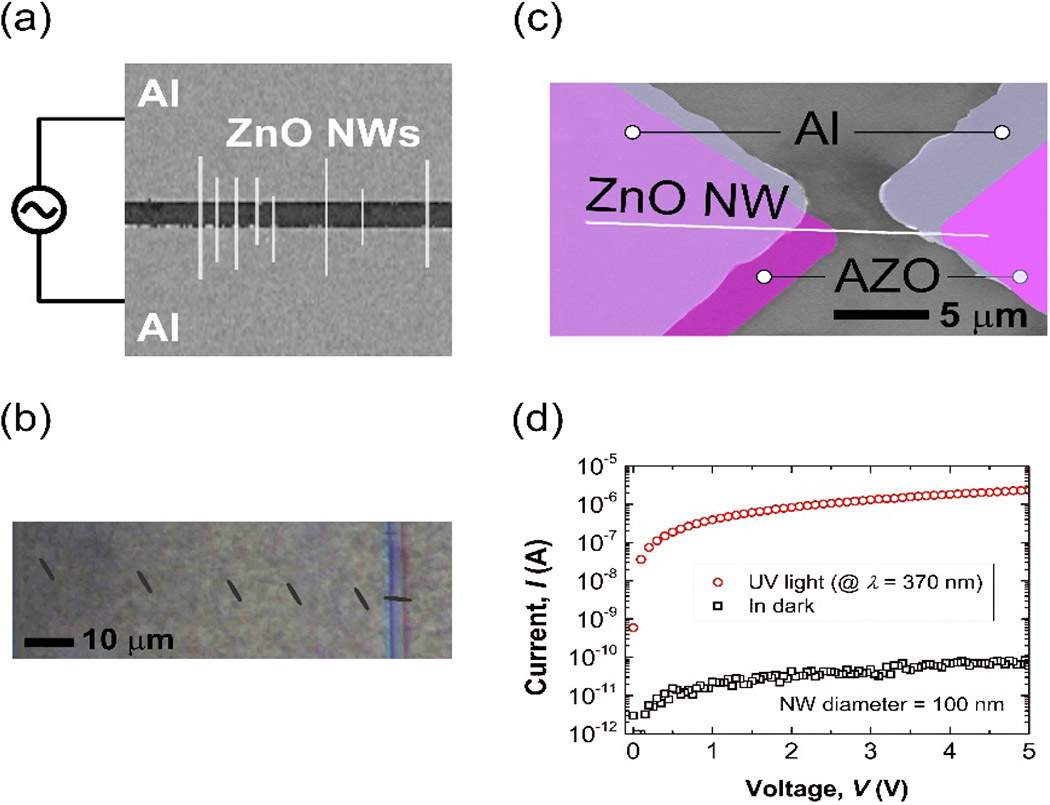 Figure 1. (a) Dielectrophoresis (DEP) alignment of multiple zinc oxide (ZnO) nanowires (NWs) across coplanar aluminum (Al) electrodes. (b) Sequence of a trapping process. The nanowire travels several microns through the ethanol solvent in a linear motion until it reaches the gap between electrodes. There, the nanowire is twisted over the gap remaining perpendicularly aligned across the electrodes. (c) Scanning electron microscopy (SEM) image of a single-nanowire device using aluminum-doped ZnO (AZO or ZnO:Al) as DEP electrodes and Al metal contacts. (d) Light (under illumination by UV light of wavelength, λ, of 370nm) and dark current of a single-nanowire UV sensor with a 100nm diameter.

DEP has been used successfully to fabricate ZnO nanowire-based sensors for UV, water vapor, and ethanol. The conducting properties of nanowires are considerably affected by the electronic charge at the surface, and two conduction mechanisms govern the nanowires' electrical properties. The first mechanism is limited to the nanowire core and is dominant in large-diameter nanowires. The second mechanism takes place through trapping and de-trapping processes at surface states and dominates in the thinnest nanowires. Hence, the main difference between the mechanisms is whether the surface states play an active or passive role in the electrical current through the nanowire.

In DEP-fabricated UV sensors, the second conduction mechanism leads to very high gains, close to those obtained in single-photon detectors, although the dynamic response is limited by long recovery times after UV exposure.6 As water vapor and ethanol sensors, the nanowire devices react to low surface coverage, proving the close relationship between the surface charges and the electrical conduction through the nanowire.

We have also explored using DEP to develop nanowire sensors based on a p-type material such as copper oxide. In contrast to ZnO light sensors, these devices exhibit faster responses limited by the resistance-capacitance constant of the equivalent circuit: see Figure 2.7 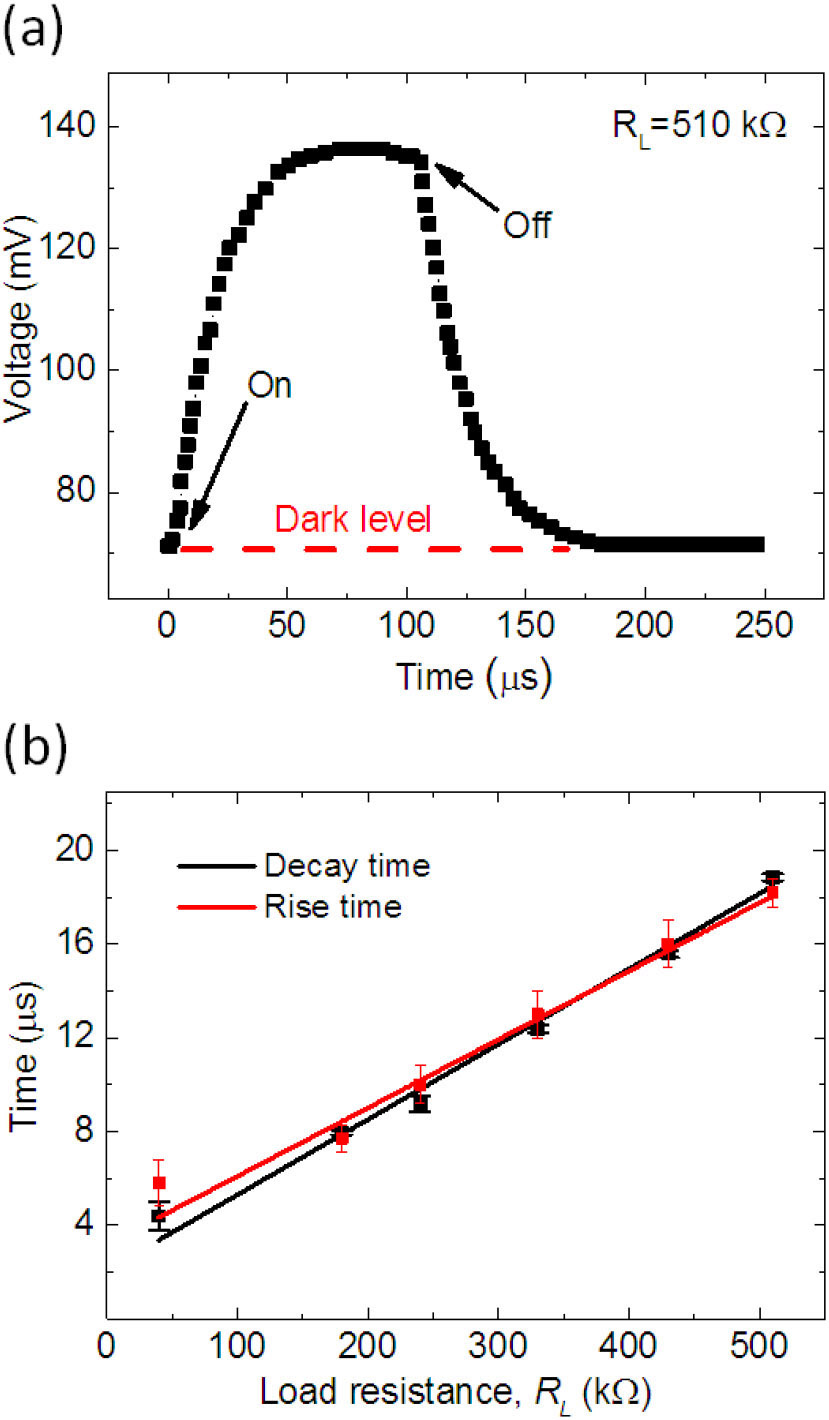 Figure 2. (a) Time response of a ZnO:Al/copper oxide nanowire/ZnO:Al heterostructure diode under pulsed illumination. (b) Decay and rise times, limited by the resistance-capacitance constant, obtained as a function of the load resistance.

In summary, we have shown that DEP offers a low-cost, bottom-up approach to integrating suspended dielectric metal oxide nanowires in electronic devices such as UV, water vapor, and ethanol sensors. In future work, we will integrate different types of nanostructures to widen the sensing capabilities of the platform and also study the use of flexible substrates to host the nanosensors.

This work is sponsored by the Spanish Ministry of Economy and Competitiveness contract TEC2010-20796 and the AVANSENS program S2009/PPQ-1642 of the Community of Madrid. The authors gratefully acknowledge the contribution of Antonio García Marín and Carlos Guerrero. They also thank Juan Piqueras of Universidad Autónoma de Madrid and David J. Rogers of Nanovation for fruitful discussions.