Oxygenation is fundamental to cellular functionality and metabolism, and may relate to many life-threatening diseases such as cancer, brain disorders, sepsis, and sickle cell disease. Red blood cells (RBCs), as the principal oxygen carriers, play pivotal roles in tissue oxygenation. Despite considerable knowledge about RBCs, direct imaging of oxygen release from a single cell remains a challenge because of the lack of a high-resolution modality.

To date, techniques for imaging oxygen metabolism in vivo include positron emission tomography, functional magnetic resonance imaging, and diffuse optical tomography. Although these approaches provide superior depth, they are limited by millimeter-scale spatial resolution. There exist optical imaging modalities to measure oxygen partial pressure, but these quantify only local oxygen tension, rather than delivery. To directly image oxygen release from single RBCs, we have developed a new approach, called photoacoustic flowoxigraphy (FOG),1 which uses dual-wavelength laser pulses to probe the amount of oxygen carried by individual RBCs.

FOG uses the photoacoustic effect, where chromophores absorb short light pulses and generate ultrasonic waves. By detecting these waves, we can determine the chromophore's absorption coefficient. Since each type of molecule has a unique absorption spectrum, we can quantify their concentrations based on measurements at multiple optical wavelengths. To determine oxygen delivery by a single RBC, FOG sequentially fires two short laser pulses with different wavelengths. The time-delay between the two pulses is as short as 20 microseconds, so that they excite almost the same spot on the same RBC. Using a voice-coil scanner, we can scan the imaging head along a capillary segment, acquiring more than 100 cross-sectional images per second. From these high-speed dual-wavelength images, we can compute multiple functional parameters, including total hemoglobin concentration (CHb), oxygen saturation (sO2), and flow speed (Vflow). Based on these, we can then determine the oxygen release rate (rO2) by using

where k is a constant coefficient, and ∇sO2 is the gradient of oxygen saturation.

We imaged oxygen release from single RBCs in a mouse brain capillary. We first acquired a vascular image over a large area to identify a capillary of interest (see Figure 1). We then aligned the fast scanning direction with the capillary, and acquired 2D images at rates of 20–100Hz. The oxygen saturation of each RBC was computed and color-coded to the RBC image. 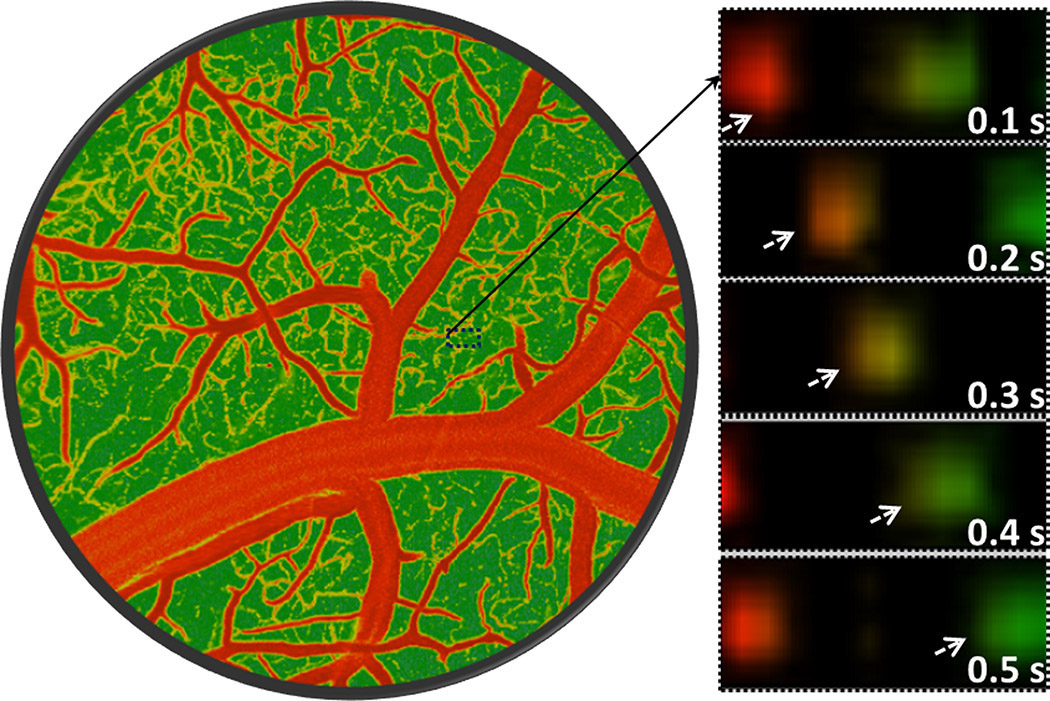 Tissue functionality is highly related to energy metabolism. In cellular aerobic respiration, oxygen and glucose are consumed in strict proportion to each other. Our single-RBC imaging technique can facilitate the study of oxygen or glucose metabolism at high resolution. We injected insulin into the mouse to induce a systemic decrease in blood glucose level. After the injection, we imaged a capillary in the mouse brain at 100Hz for 60 minutes. At the same time, we measured the level on a glucose meter every 10 minutes by drawing blood from the mouse tail. The result shows that the oxygen release was closely associated with the blood glucose level. When the level changed from normoglycemia to hypoglycemia, the magnitude of ∇sO2 and rO2 were dramatically decreased, but blood flow speed increased.

Neurovascular coupling provides a valuable approach to study neuron activity through hemodynamics, and FOG enables the detection of coupling between neuron activities and single-RBC oxygen release. We showed this capability by imaging single-RBC oxygen release under visual stimulations. We flashed a white light-emitting device at 1Hz to stimulate a mouse's eye, while imaging a capillary in the corresponding visual cortex region through a small craniotomy. The visual stimulation was switched between on and off every 3 minutes, and we observed that under stimulation the sO2 decreased, while ∇sO2, Vflow, and rO2 increased significantly.

FOG provides a novel approach to directly image oxygen release from single flowing RBCs. Moreover, it enables us to quantify, simultaneously, multiple functional parameters. The real-time, label-free (using only endogenous factors for comparison), and reflection-mode imaging capabilities make it suitable for many in vivo biomedical studies. For example, since hypermetabolism is a hallmark of cancer, FOG can potentially provide label-free screening of early-stage disease. Through neurovascular coupling, this technique can also enable study of brain functions and disorders at the single-RBC level. Our next step will focus on further increasing the imaging speed to provide real-time 3D imaging of oxygen release from single-RBCs, as well as extending the application to image circulating tumor cells.

Lidai Wang received a PhD from the University of Toronto. His research interests include biomedical imaging, robotics, and micromachines.

Konstantin Maslov graduated from the Moscow Institute of Physics and Technology, and received a PhD in Physical Acoustics from Moscow State University in 1993. He worked as a research scientist at the Institute of Chemical Physics at the Russian Academy of Sciences. From 1996–2006, he worked in the Aerospace and then Biomedical Engineering departments at Texas A&M University. Currently he is a research associate professor in the Biomedical Engineering Department at Washington University in St Louis. He and his co-authors won an award for the best paper at the SPIE Photonics West Conference section on Photons plus Ultrasound in 2006, 2010, and 2011.

Lihong Wang earned his PhD at Rice University, Houston, Texas under the tutelage of Robert Curl, Richard Smalley, and Frank Tittel. He is Gene Beare Distinguished Professor at Washington University, where his laboratory invented functional photoacoustic tomography, 3D photoacoustic microscopy, and time-reversed ultrasonically encoded optical focusing. He has published 350 journal articles and delivered 370 invited talks. He also co-founded two companies to commercialize photoacoustic tomography, and is a fellow of the American Institute for Medical and Biomedical Engineering, the Optical Society, the Institute of Electrical and Electronics Engineers, and SPIE.