Basic physical characteristics of a material can be determined by measuring its acoustic properties. Although there are established ultrasonic technologies to measure acoustic properties of materials in frequency regimes below the GHz level (109Hz), similar methods have not yet been developed for regimes between 500GHz and the THz level (1012Hz). These regimes are particularly important because there is a longstanding issue concerning the acoustic properties of glass and amorphous materials. These substances universally exhibit excess vibrational states that the traditional Debye model, which estimates the contribition of atomic vibrations (phonons) to the specific heat of a solid, fails to explain.1 In addition, the frequency-dependent acoustic attenuation parameter (which measures energy loss via sound propagation) changes from the second to the fourth power of frequency between 100GHz and 1THz.2

Acoustic waves are normally generated and detected by applying and monitoring the electric field changes of piezoelectric materials. However, acoustic response is limited by the bandwidth of the electronic system used. For high acoustic frequency generation, femtosecond (i.e., ultrashort) lasers are used to shine light on a thin metal film and generate acoustic pulses with a duration on the order of picoseconds (ps).3 These acoustic pulses can be detected by femtosecond laser spectroscopy—the ‘pump-probe’ technique—due to the change in refractive index they cause. Femtosecond laser spectroscopy can be used to achieve bandwidths of tens of terahertz. The bandwidth of the acoustic pulses is also limited by the thickness of the metal film and by the process of thermal expansion (about 1–2ps). These factors have limited the frequency of acoustic spectroscopy to below 500GHz for about 20 years.4

We can now achieve coherent acoustic spectroscopy of materials in the THz frequency regime by using nanostructured gallium nitride (GaN)-based materials. Figure 1 illustrates how the acoustic properties of an objective layer on top of a thin GaN film can be measured. Femtosecond laser pulses generate electrons and holes (positive charge carriers) in the quantum wells of a GaN substrate, which causes the electric field to suddenly change (on the femtosecond timescale). The piezoelectric effects create strain and produce acoustic phonons, which gives our system a faster response time than the traditional methods.

In 2011 we used our technique, with a single indium gallium nitride (InGaN) quantum well as the OPT, to study the acoustic attenuation of a thin film of vitreous silica, up to a frequency of 650GHz.6 Although the bandwidth of the generated acoustic pulse can be more than 1THz, the attenuation above 500GHz is very high and causes the high-frequency part of the echoes to be attenuated to the level of noise. We therefore needed to increase our acoustic frequency further to improve the signal-to-noise ratio and study vitreous silica.

We have now developed our approach so that multiple quantum-well structures are used as the OPT, which allows us to study vitreous silica up to a frequency of 740GHz.7 By using multiple quantum wells, we can generate acoustic waves with a central frequency rather than a single broadband pulse from a lone quantum well. We process the signal by applying a Fourier filter to the central frequency, which improves the signal-to-noise ratio. An example of the time-domain signal is shown in Figure 2(a). The attenuation in GaN is not strong. Therefore, the period of echo 1 has a frequency of about 370GHz. The acoustic waves, however, are highly damped in the vitreous silica. This means that the echo 2 signal is not obvious but can be resolved in the Fourier spectra, shown in Figure 2(b). We are able to analyze frequencies up to (at least) the second harmonic frequency of 740GHz, depending on the signal-to-noise ratio of echo 2 Fourier spectra. The third harmonic frequency peak—at about 1.1THz in Figure 2(b)—is marginally within the noise level, but with a thinner layer of vitreous silica we should be able to lower the attenuation of echo 2. 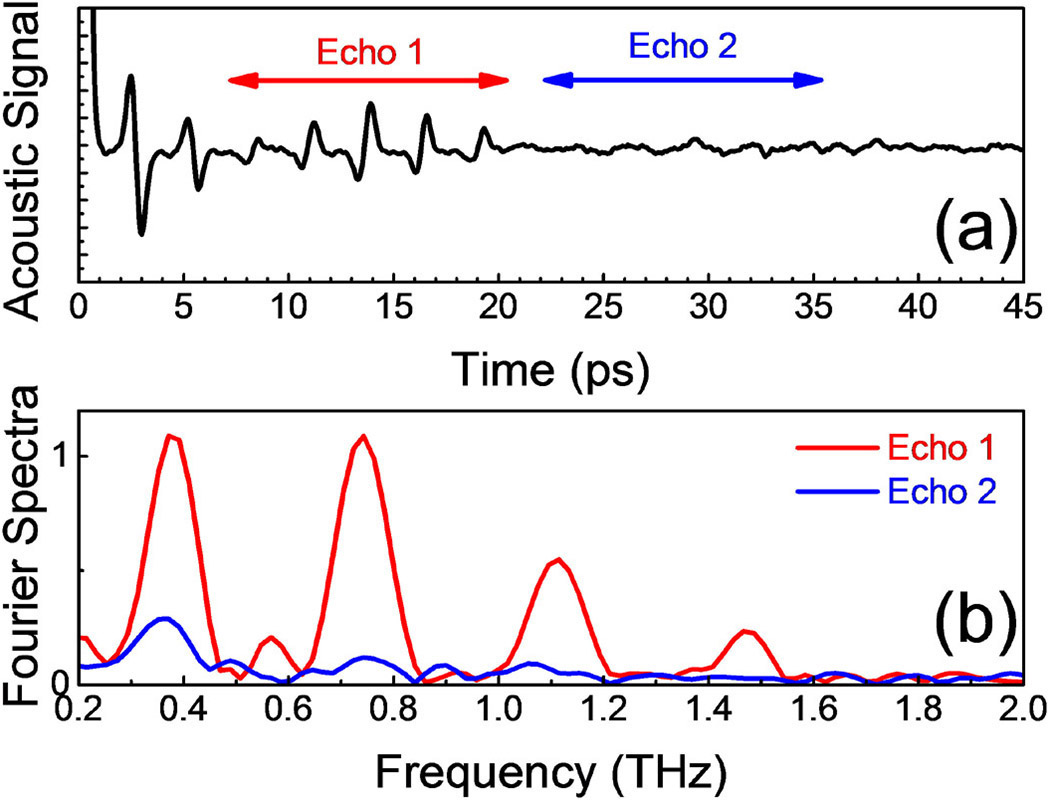 We have developed a technique, using femtosecond laser spectroscopy and nanostructured GaN-based semiconductor materials, that can be used to measure the acoustic properties of materials up to the THz frequency regime. We now plan to measure the acoustic properties of other amorphous, glassy, and even liquid materials. We are also working on developing time-domain analysis to be used on high-amplitude echoes, at even higher frequencies, which are produced by an ultra-thin objective layer in our system.