Microsuturing, or delicate repair, of brain arteries is the gold standard for repair of surgical cuts and for rejoining small blood vessels (anastomosis), for example, in performing neurosurgical bypasses. The nature of brain surgery, with deep and narrow operative corridors, makes conventional microsuturing even more challenging. Conventional suturing methods are linked with several degrees of damage to blood vessel wall structures, which can cause a clot to form. In addition, the suturing procedure is slow, and it is necessary to stop the flow of blood through the vessel for its duration, which increases the risk of brain damage from a lack of oxygenated blood.

Laser-based suturing techniques potentially offer several advantages when compared to conventional methods, and a solution to this problem has been studied since the 1970s.1 One of the most promising approaches is laser welding with an 810nm diode laser combined with application of a dye known as indocyanine green (ICG) to the area.2, 3 ICG mediates absorption of the laser light, and the resulting photothermal effect fuses the local tissue. However, the liquid formulation of ICG is partially optically degradable and spreads out over a large volume of tissue, thus failing to confine the welding procedure locally. To address this, we have proposed a laser soldering approach, based on a combination of the diode laser and a solid formulation of ICG and a biopolymer named chitosan.4

We have designed and tested ICG-infused chitosan patches as soldering tools in laser-assisted vascular repair (LAVR) and laser-assisted vascular anastomosis (LAVA). The patches are resistant and stable in the physiological environment, and show enhanced optical stability over time compared to liquid ICG. The absorption peak is in the near-IR (NIR) region. The patches can be used as a plaster, to cover a perforating wound. We use an NIR laser (an 810nm diode equipped with a 300μm-diameter fiber core) to induce close adhesion between the tissue and the patch. Our protocol is to first deliver single laser pulses (100J/cm2), keeping the fiber tip in contact with the outer layer of the patch, while the irradiated zone is kept hydrated. We then perform continuous-wave laser irradiation (18W/cm2) to improve patch adhesion to the tissue surface. A short video showing the procedure during a LAVR study is available online.5

We used the optimized laser soldering procedure to perform in vivo tests on a rabbit carotid artery. LAVR was carried out without the use of any stitches: see Figure 1(A). We joined two small blood vessels together end-to-end (LAVA) with only four single stitches: see Figure 1(B). An immediate and effective closure was observed in all the treated samples, and we achieved complete wound closure in quite a short and acceptable operative time. The strength of the vessels and their morphological characteristics were then studied at different follow-up times (for up to 90 days), by histological, immunohistochemical, and scanning electron microscopy analysis. All the treated vessels were perfectly sealed at follow-up. We found good healing of the blood vessel walls, with perfect restoration of the inner wall. 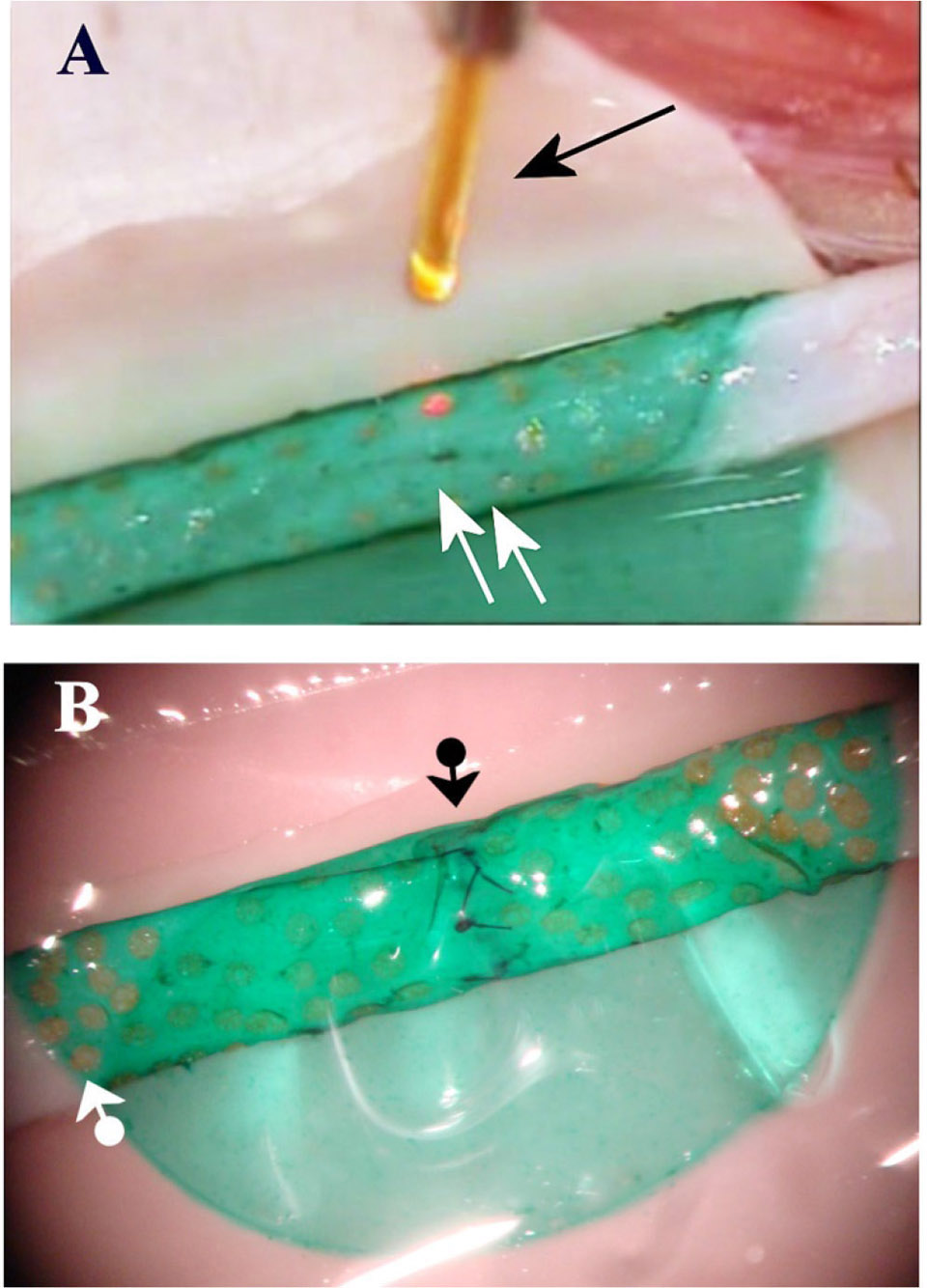 In summary, our solid ICG formulation for laser soldering improves the current microsurgical techniques to rejoin and repair small blood vessels. It enables surgeons both to avoid (LAVR) and to reduce (LAVA) the use of suturing material. Our approach overcomes the problems occurring in laser welding with liquid ICG solutions, such as its optical degradation and diffusion in the tissues. Our next steps are to further optimize and standardize the procedure in preparation for a clinical study of its use.

Roberto Pini is a senior scientist at IFAC-CNR in Sesto Fiorentino, where he leads the Biophotonics and Nanomedicine Lab. His research interests focus on laser-activated nanoparticles and chromophores for medical use, new medical lasers, and preclinical and clinical studies on laser surgery. He is co-author of about 200 articles.