A novel integrated laser source without a laser

Developing novel laser sources has been a very active research topic since the invention of the first laser more than 50 years ago. Generating frequency combs (a series of equally spaced frequencies) is a significant area of laser research. The Nobel Prize in Physics for 2005 was awarded to John L. Hall and Theodor W. Hänsch for their contributions to the development of laser-based precision spectroscopy, including the optical frequency comb technique. Frequency combs have important applications in many areas, including metrology, where they can improve clock precision by up to a billionth of a second per year.1

One way to generate a frequency comb is to exploit optical parametric oscillators (OPOs), which are optical cavities that resonate at the comb frequencies. When pumped by an appropriate external laser, these cavities can generate multiple equally spaced new frequencies via nonlinear optical processes. A key goal has been to realize these devices in integrated form, thus achieving much more compact and cost-effective solutions compared to those offered by free-space optics. A very promising approach relies on microresonators, i.e., optical cavities with dimensions in the micron range.2,3 However, their ultra-small volume results in a greatly increased sensitivity to heat induced by the pump laser, which shifts the cavity resonances. This, in turn, requires continuous adjustment of the pump wavelength to track this thermal drift: see Figure 1.4 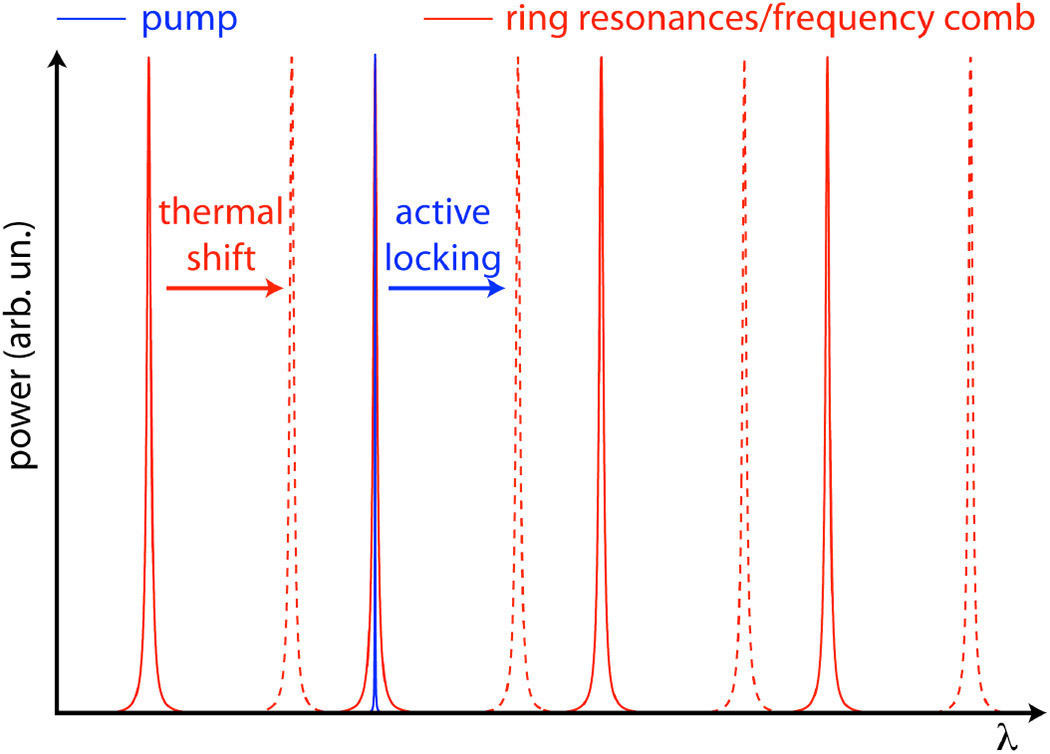 Figure 1. Scheme of the resonance shift caused by heat in a laser-pumped microring resonator. To generate a frequency comb, the pump wavelength (in blue) must be tuned to one of the ring resonances (solid red line). However, because of the heat induced by the pump the ring resonances shift (dashed red line), thus losing the locking with the pump. To maintain the operation of the device, the pump wavelength must be continuously tuned to follow the resonance drift. arb. un.: Arbitrary units. λ: Wavelength.

Until now, the solutions proposed for locking the pump wavelength to the comb frequencies either rely on quite complex active stabilization methods or lead to an unstable operation in which the device shuts down after a few tens of minutes. To solve this, we have proposed an innovative solution: completely removing the external pump laser from the outset, thus circumventing the entire issue. In our scheme, the pumping laser is directly generated at one of the resonant frequencies of the microring and thus is automatically self-locked to the comb frequencies.5We achieved this by embedding the microresonator (a ring resonator based on Hydex glass)6–8 in an active (i.e., providing gain) external cavity that consists of a fiber loop containing an optical amplifier. This approach effectively creates an internal pump laser that includes the microcavity itself, which is thus automatically self-locked to the comb frequencies.5,9

A key advantage of our approach—effectively a dual-cavity laser scheme—is that it requires only a standard fiber amplifier (providing the gain for the pump) instead of an external tunable laser and complex electronics: see Figure 2. The amplified spontaneous emission (ASE) generated by the amplifier is first filtered by a standard optical bandpass filter, centered around a single resonance of the microring resonator. The ASE is then coupled into the ring resonator, with the output of the micro-ring coupled back into the optical amplifier: see Figure 2(b). This back-coupled ASE, naturally filtered by the ring, forms the seed for further amplification. Consequently, lasing starts at the ring resonance selected by the bandpass filter, and any shift in the cavity resonances also shifts the wavelength fed back to the amplifier. The lasing wavelength intrinsically follows any thermal drifts of the ring resonances. Further details are available elsewhere.5, 9,10 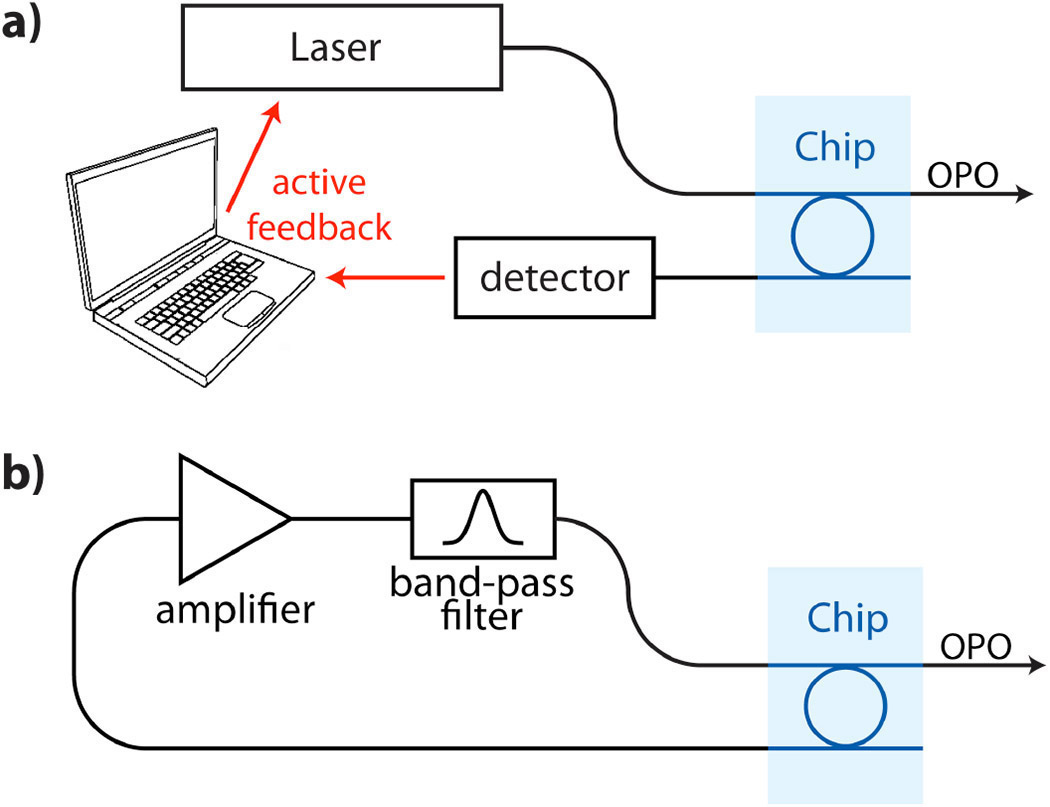 The pump power is then increased until the OPO threshold is reached, resulting in the generation of a very broad frequency comb (>300nm) centered around the pump wavelength: see Figure 3. This self-locked scheme allows stable pumping of the microring without losing the optimal (i.e., resonant) pumping condition and, most importantly, without requiring any active or electronic feedback loops. Operation is highly stable over many days without significant fluctuations in the pump power. Using a similar self-locked pumping scheme, this approach can also be used to lock the modes of the frequency comb together, thus achieving a stable and ultra-fast pulsed laser with repetition rates as high as 200GHz.9, 10 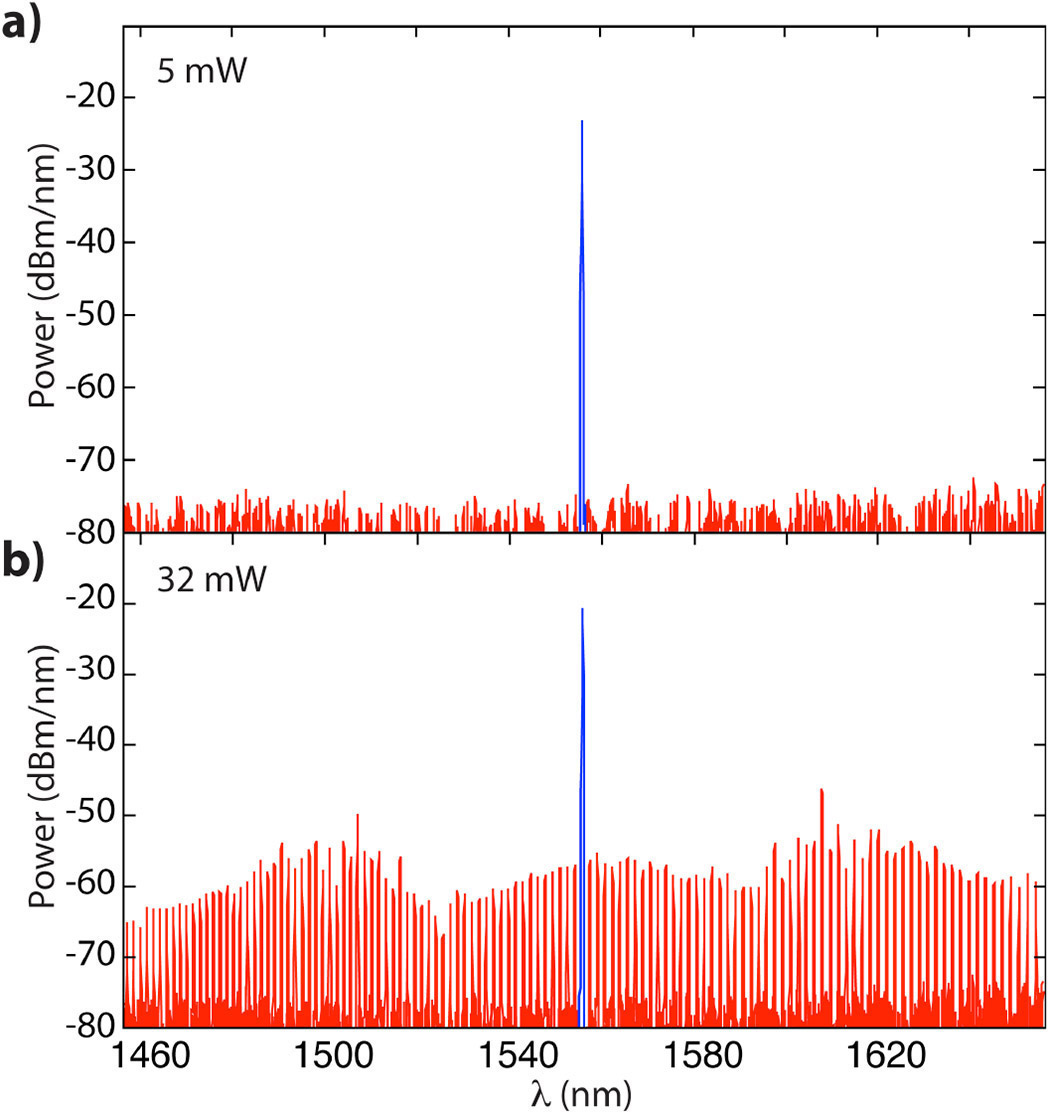 In summary, optical frequency combs offer powerful solutions for a wide variety of applications, such as sensing, metrology, and ultra-fast laser sources. Microcavities are a very attractive approach to generating frequency combs but come with some drawbacks, such as high sensitivity to thermal drift, resulting in complicated feedback mechanisms for locking the external laser to the microring resonances. By removing the external pump laser our solution circumvents this issue, achieving highly stable operation over very long timeframes without complex external control loops. This approach solves a critical practical issue that will go a long way toward rendering these devices simple, robust, and cost-effective for real-world applications. The self-locked pump in this configuration can exhibit chaotic dynamics,5 which in turn reduce the OPO threshold. In the future we will further analyze the dynamics of the self-locked pump to deliver highly controllable and optimized self-locked pump pulses.