Terahertz spectroscopy is widely used for chemical detection, and has applications in quality control for manufacturing, security screening, and astronomy. Most chemicals absorb in the mid-IR and THz spectral regions, which cover a wavelength range of 3–300 microns. However, detecting trace amounts (parts-per-billion) is often challenging with IR and THz spectroscopy because traditional broadband thermal sources are not compatible with high-sensitivity detection techniques, such as cavity ring-down or photoacoustic spectroscopy. These methods require long optical path lengths (directional emission) or high average power at a specific wavelength, which favors the use of lasers. The ideal source is compact, efficient, and broadly tunable over the wavelength range of interest.

During our research1 we developed quantum cascade lasers (QCLs) with the highest power, efficiency, and tunability. Unlike traditional diode lasers, the QCL has a series of quantum wells, which split the usual electron bands into subbands. The QCL emits over several intersubband transitions in this structure. We can engineer its optical response using quantum size effects, to achieve a highly variable emitting wavelength based on nanometer-scale control of the quantum well thickness: see Figure 1(a). We demonstrated room-temperature QCLs covering both the 3–16μm and 65–300μm wavelength ranges2–4 using an indium phosphide (InP) material system.5 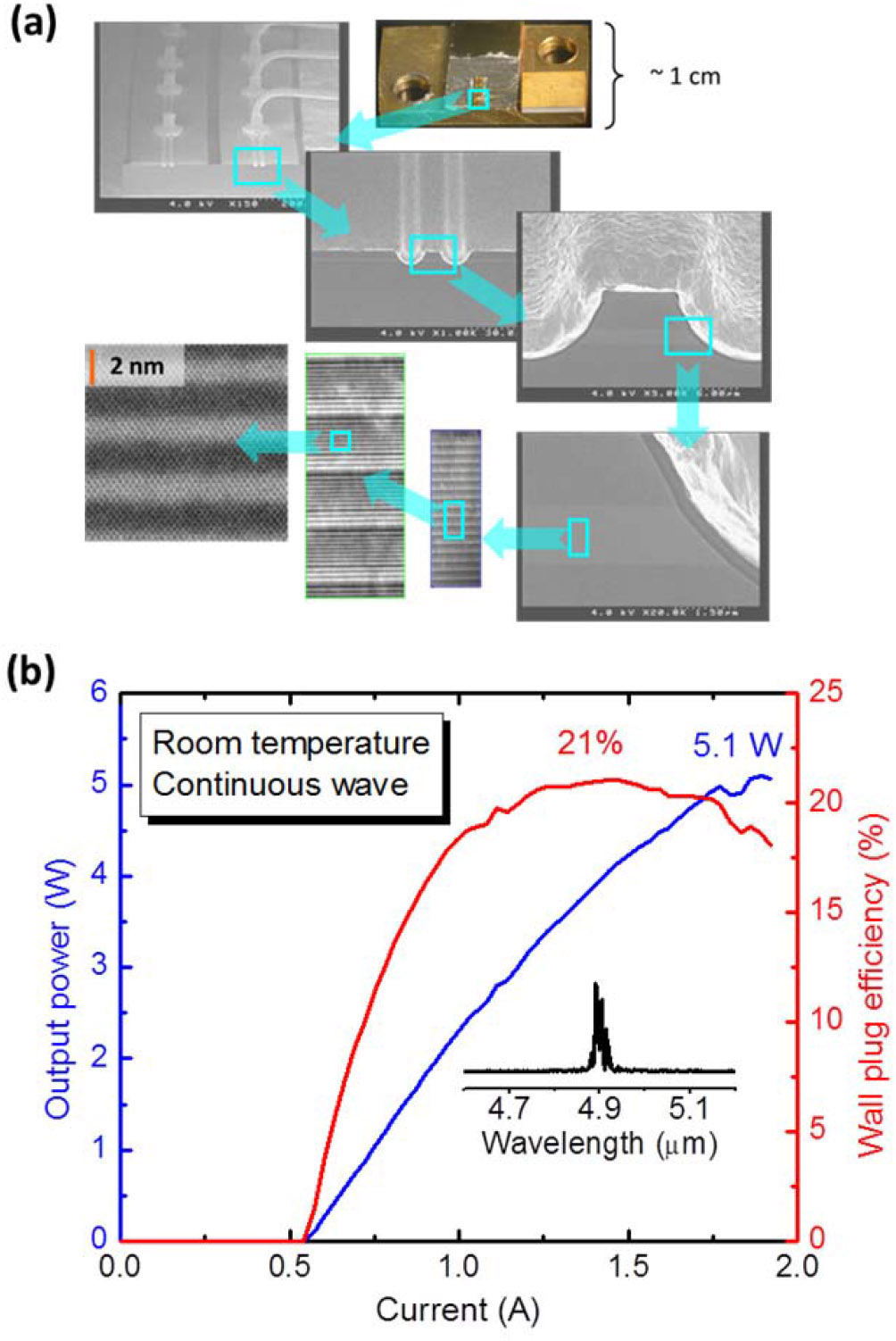 Figure 1. (a) Images of a quantum cascade laser (QCL) at different magnifications. (b) Continuous-wave performance of a high-efficiency QCL at room temperature.

As we worked to improve the spectral coverage of QCL technology, we also sought to realize high-efficiency and high-power sources. High efficiency is critical to maintaining a compact device and minimizing waste heat, especially in continuous operation. We achieved 53% and 27% wallplug efficiency (electrical-to-optical power conversion efficiency) at 40K and 300K, respectively.6, 7 We also demonstrated high-power continuous operation, with up to 5.1W for a single emitter at a wavelength of about 4.9μm: see Figure 1(b). We achieved peak-power scaling, with broad-area lasers exhibiting power levels of 10, 190, and 25W at wavelengths of 3, 4.5, and 10μm, respectively.8 We made similar investigations of high-power single-frequency QCLs with good beam quality. In continuous operation, we achieved distributed feedback (DFB) QCLs with up to 2.4W of power.9 In efforts to develop a more scalable architecture, we also demonstrated single-frequency surface-emitting DFB ring lasers, with up to 0.5W of continuous power at room temperature.10 Using broader area devices, such as photonic crystal DFB—see Figure 2(a)—and β-DFB geometries (one-dimensional DFBs inside an angled cavity with the grating lines parallel to the laser facet), we obtained single-frequency peak powers up to 34W, as shown in Figure 2(b).11,12 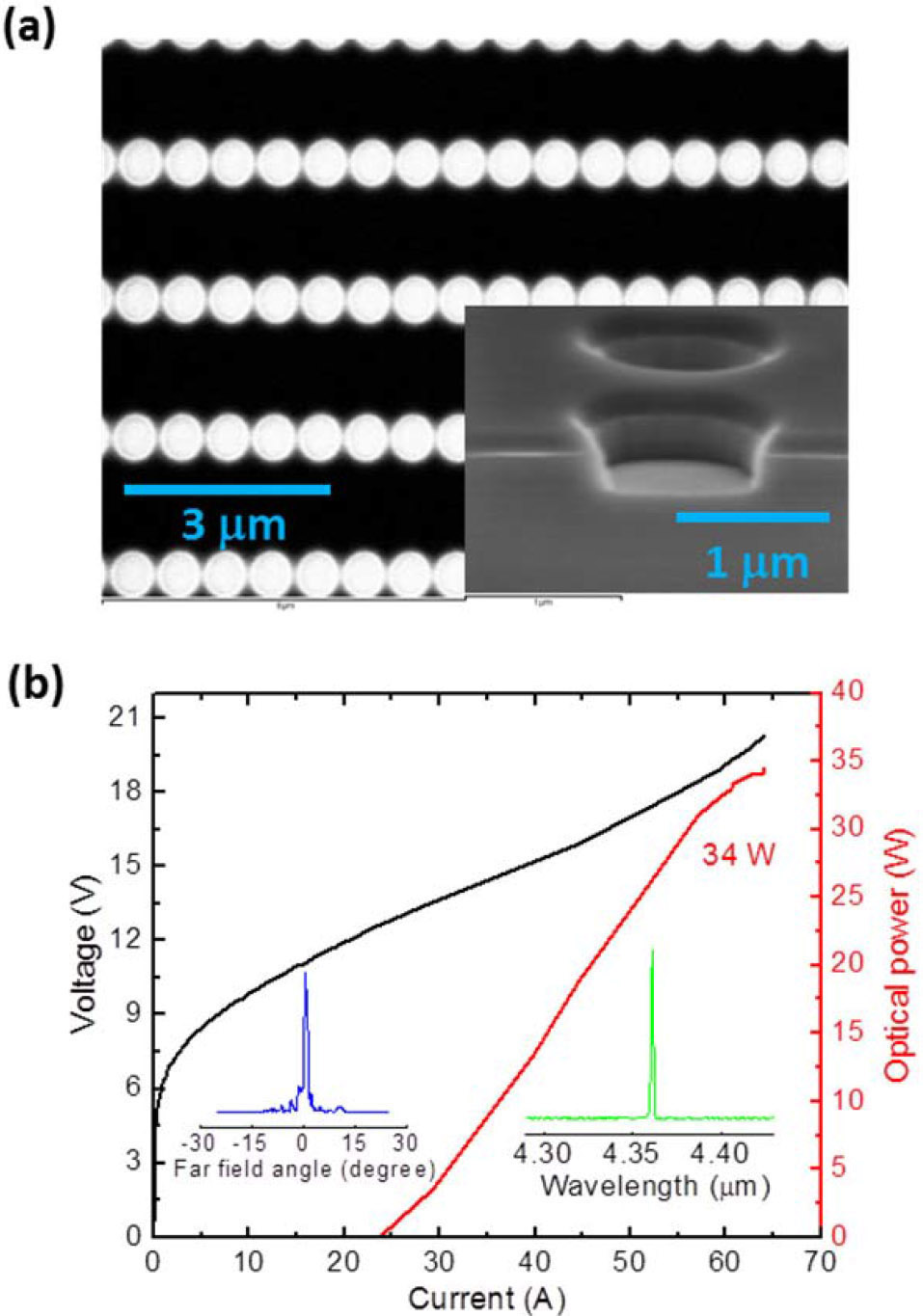 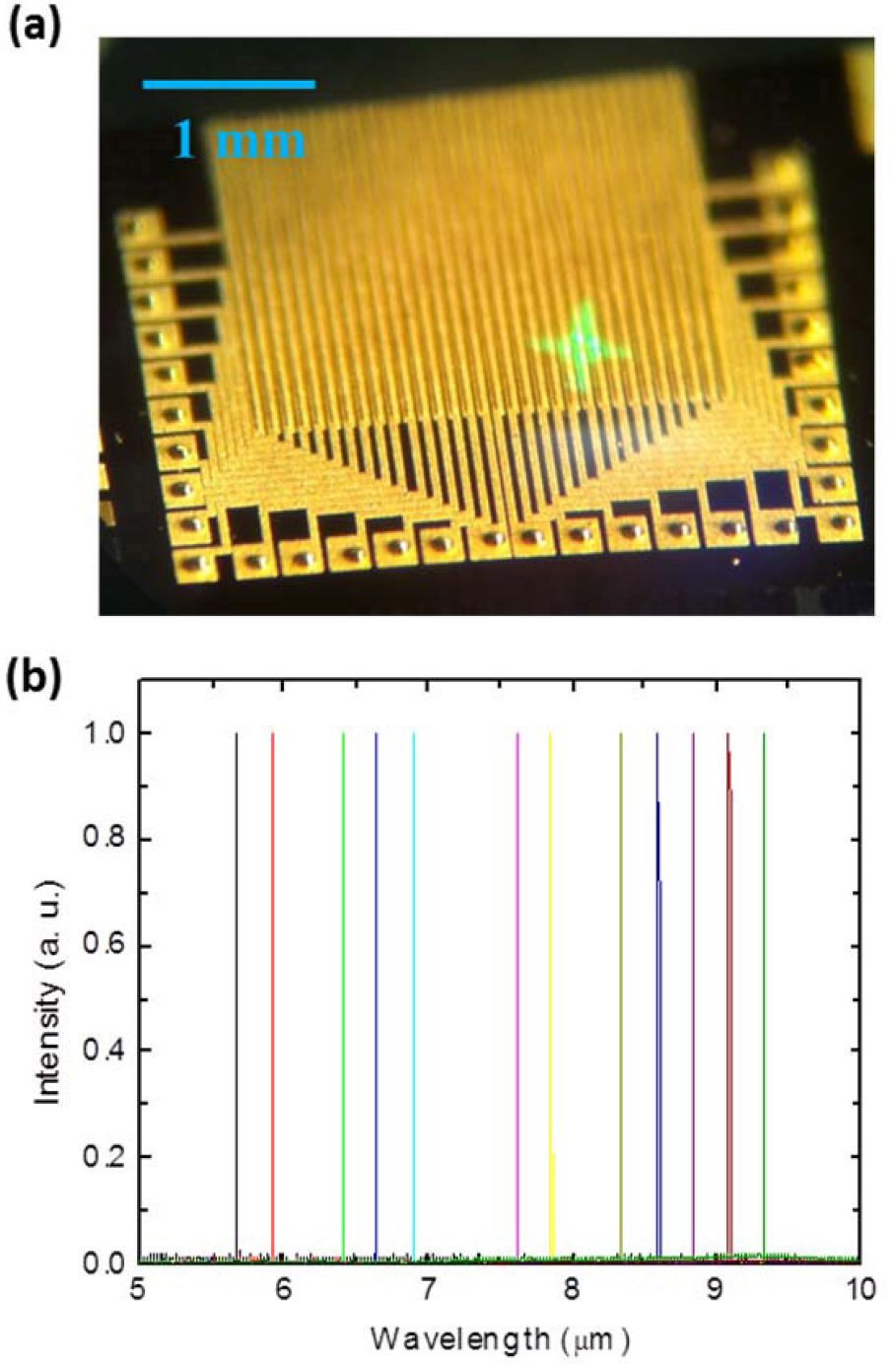 We are also investigating wide spectral coverage and electrical tuning of QCLs on a single chip, including DFB laser arrays—shown in Figure 3(a)—covering up to 95cm−1 continuously.13 For dynamic tuning with a single device, we developed sampled-grating distributed feedback (SGDFB) QCLs with up to 50cm−1 of electrical tuning and continuous operation,14 and recent design changes have enabled tuning of up to 240cm−1 from a single device.15 Figure 3(b) shows a super-broadband heterogeneous gain medium covering a wavelength range of 5.7–9.3μm. We have developed similar array technology with dual wavelength sources based on intracavity difference frequency generation,3 as shown in Figure 4(a). We demonstrated THz emission from 1–5THz at room temperature: see Figure 4(b). 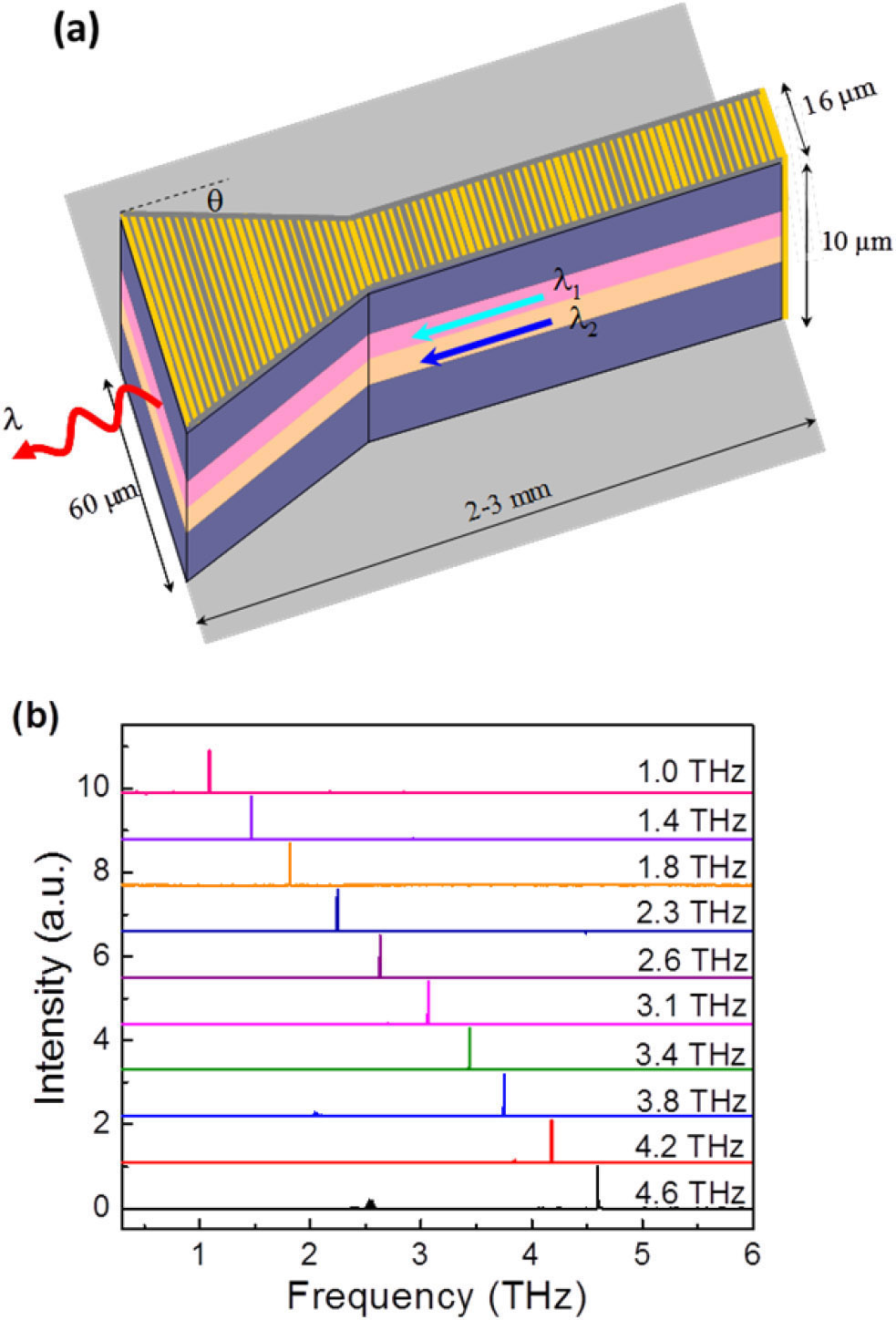 Figure 4. (a) Schematic diagram of a THz source based on intracavity difference frequency generation. (b) Room-temperature single-mode emission from 1–5THz. λ: Wavelength.

With increases in power, spectral coverage, and tuning range we are finally exploiting some of the physical potential of intersubband emitters. At present, there is no hard limit in any of these areas, and the next step is to continue to improve characteristics for real-world applications. We also aim to transfer the technology from the laboratory to commercial products; handheld and battery-powered laser sources being the preferred option for many applications. Finally, cost remains an issue for adopting this technology, although—as with other semiconductor lasers—it has strong potential for mass production, which would reduce costs considerably.

Manijeh Razeghi is the Walter P. Murphy Professor and director of the Center for Quantum Devices at the Department of Electrical Engineering and Computer Science. She is a leading scientist in semiconductor technology, pioneering the development and implementation of major modern epitaxial techniques.