The angular resolution of a grazing incidence focusing mirror is an important parameter in x-ray optics. It is often quantified by either the point spread function (PSF)—the distribution of the focused rays as a function of the distance from the center of the focal spot—or the half-energy width, which is double the PSF median value. The focusing of x-rays (with wavelengths ∼1000 shorter than visible light) is very sensitive to both a mirror's surface profile and roughness (see Figure 1), i.e., surface relief on a variety of scales down to a few angstroms in height. PSF calculations for a focusing mirror must therefore account for both these factors. The surface roughness typically causes an x-ray scattering interference effect, which generally increases with x-ray energy. There are, however, several problems with computing the PSF by considering profile and roughness separately. 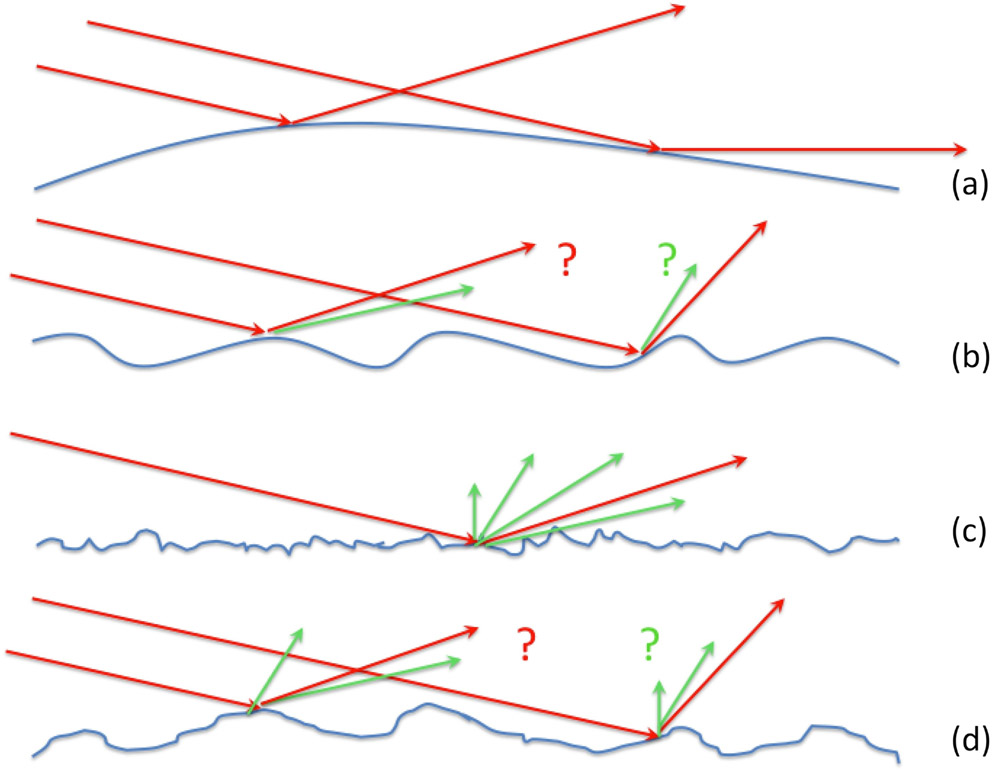 Figure 1. Behavior of x-rays interacting with non-smooth grazing focusing mirrors. (a) Geometric optics can be applied to mirror defects with long spatial periods. (b) At mid-frequencies (i.e., centimeter to millimeter wavelength range) x-ray behavior is more uncertain. (c) Surface diffraction from micro-roughness is described by perturbation theory. (d) All three defects, as in (a), (b), and (c), are included and are difficult to treat consistently.

It has long been known that x-ray focusing degradation caused by long-period deformations—e.g., Figure 1(a)—and surface roughness of mirrors—see Figure 1(c)—can be analyzed separately by treating the x-rays as rays or waves, respectively. When treating the x-rays as rays, geometric optics are applied. A well-established x-ray scattering (perturbation) theory1 is used when they are treated as waves, but it can be applied only to very smooth surfaces and to short-period features. However, the boundary between these two regimes2 is difficult to define and not clear-cut. Degradations in optical behavior caused by surface features in an intermediate spatial frequency range—see Figure 1(b)—cannot always be treated with either of the two methods mentioned.3 In addition, neither the geometric optics nor the scattering approach account for the effect of aperture diffraction. It can also be difficult to combine the separately derived geometry and scattering PSF values to obtain the total PSF of the mirror.

We have created a new and self-consistent method that does not require boundaries between mirror geometries, profile frequencies, or surface roughnesses to be set.3 Our method is based on the Huygens-Fresnel principle (for wave propagation analysis), and it computes the electric field that is diffracted by the ‘real’ mirror profile to the focal plane. A similar approach has been used to study scattering from rough surfaces,4 but it has not been extended for longer profile wavelengths, which are traditionally treated with geometric optics. By applying physical optics to a complete profile, including long wavelengths, we are able to account for all imaging degradation factors simultaneously.

Wavefront propagation modeling codes are commonly used in x-ray optics. They are rarely applied to real x-ray mirrors, however, because the micron-scale lateral sampling that is required makes the computations very intensive when performed over a 2D surface and focal plane. Computational complexity is greatly reduced if only one dimension is considered. X-rays are only reflected from a mirror at shallow angles, so their diffraction is more effective in the incidence plane than in the transverse direction (usually by 100 or 1000 times). In our formulation, we therefore neglect mirror roundness errors and concentrate only on the longitudinal profile. This is described by the surface radial coordinate, rm, as a function of the axial coordinate, zm (see Figure 2). Our rm(zm) function is a superposition of the desired profile and of profile errors for any spatial frequency and amplitude. At lower frequencies the profile errors can be measured directly, but at higher frequencies they are taken from a statistical characterization. 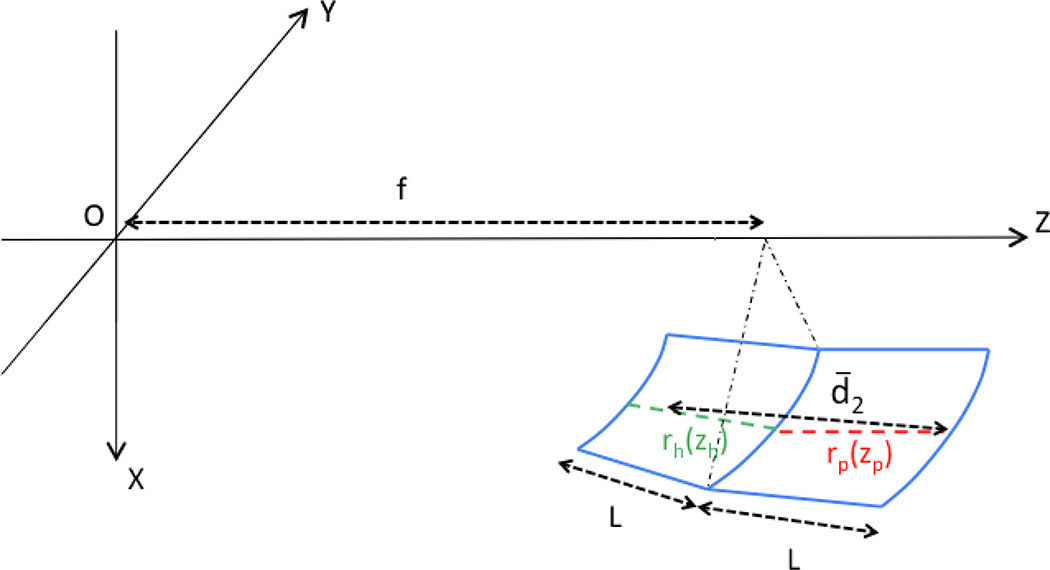 Figure 2. Scheme used to compute the electric field diffracted by a Wolter-I mirror with focal length f. The x-rays from a source at an astronomical distance impinge the mirror from the right side and are focused to the point O. The longitudinal profiles for the primary, rp(zp), and secondary, rh(zh), segments are assumed to have the same length (L). The dashed lines are the intersection of the real mirror surface with the xz plane.

X-ray telescope mirrors, such as the common Wolter-I, rely on double reflections.5 In our calculation we therefore consider two different longitudinal profiles, rp(zp) and rh(zh), for the primary and secondary segments (see Figure 2). In an ideal case, the rp of a Wolter-I mirror is a parabola, and rh is a hyperbola. In real cases, the mirror profiles also have low-, mid-, and high-frequency errors that are superposed on these shapes. Our PSF calculation therefore has two steps. First, we compute the field that is diffracted by the primary mirror onto the secondary mirror. We then find the double-reflection PSF from the field that is diffracted by the secondary mirror on the distant focal plane.

Our PSF calculation6 can easily be adapted to cases with on-axis x-ray sources at finite distances. This is the situation in many ground-based x-ray sources (e.g., synchrotrons or free-electron lasers). The computation also works for an arbitrary number of reflections and for any light wavelength. In the computation, the correct weight is automatically assigned to surface diffraction, geometric optics, and scattering effects. We calculated the PSF that is expected from a Wolter-I mirror profile, which included profile imperfections over six orders of magnitude of spatial frequencies, for three different light wavelengths (see Figure 3). We used the same formulations in each of the three cases and required no boundaries for the figure or roughness. We experimentally validated our computations by making measurements in the 15–50keV energy range at the SPring-8 synchrotron facility.7

Figure 3. The point spread function (PSF) of a Wolter-I mirror that is computed at three different energies from a long-period, deterministic profile error plus a high-frequency roughness profile.6 In UV light (top panel), aperture diffraction is the dominant term. At 0.4keV (middle panel), the PSF is mostly affected by the long-period error of the mirror. At about 50keV (bottom panel), x-ray scattering from surface roughness has a major impact on the PSF. HEW: Half-energy width.

We have formulated (and experimentally verified) a new and flexible method to predict the angular resolution of grazing incidence x-ray mirrors, using surface profile and metrology measurements. We are now working to include errors in mirror roundness in our calculations. We also aim to maintain one dimensionality and therefore avoid increased computation time.

This work was supported by the Italian Space Agency.

Daniele Spiga obtained his physics degree from the University of Milan in 2000, and his PhD in astrophysics and astronomy in 2005. Since 2007 he has been a staff researcher. His current work concerns surface metrology tests and the prediction performance of focusing mirrors in x-ray astronomy.

Lorenzo Raimondi graduated with a degree in astronomy from the University of Bologna in 2008. In 2012 he received his PhD in astronomy and astrophysics. Since then he has worked in the PADReS group, where he is in charge of the x-ray optical metrology laboratory.