Ellipsometry of graphene reveals its optical properties, the effect of a water layer on its surface, and that a residue from wet transfer can significantly increase visible light absorption.
05 December 2013
Aleksandar Matković and Radoš Gajić

Graphene, a novel nanomaterial, was first isolated in 2004 by Novoselov and coworkers.1 It is essentially a single atomic layer of carbon, where the atoms are arranged into a hexagonal, honeycomb-like structure. This structure is the reason for graphene's unique electronic,2 optical,3 and mechanical properties, which have attracted both fundamental and applied research interest in recent years. Graphene shows promise for use in future electronic devices and especially optoelectronics,4 so it is important to fully understand its optical properties. We have used various techniques to investigate these and also the effects of transfer residue and annealing.5–8 Furthermore, we have studied the behavior of graphene in laboratory conditions, when a water layer forms on it.7

Ellipsometry is an optical technique used mainly for investigating the dielectric properties and thicknesses of thin films. It is nondestructive, contactless, and used in many different fields, such as solid-state physics and microelectronics, for both fundamental research and industrial applications.9, 10 Ellipsometry measures the ratio between complex amplitude reflection coefficients for the electric field vector parallel (rp=Erp/Eip) and perpendicular (rs=Ers/Eis) to the plane of incidence: see Figure 1. This ratio is presented as the complex value ρ=rp/rs= tan(Ψ) exp(iΔ). 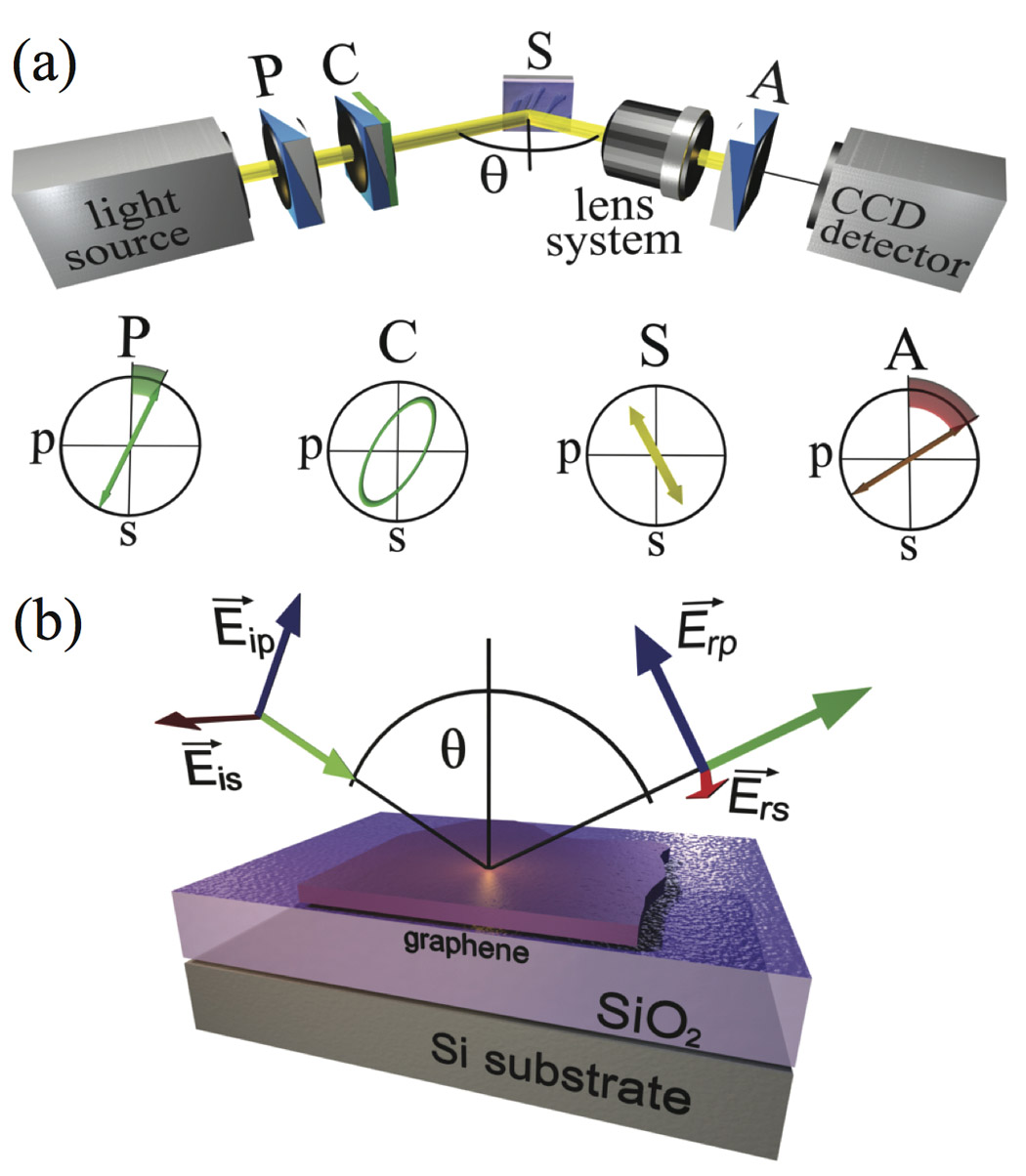 Figure 1. (a) Schematic representation of the imaging ellipsometry setup with a polarizer (P), compensator (C), sample (S), and analyzer (A). Also shown is the state of polarization (s and p represent the electric field vector parallel and perpendicular to the plane of incidence, respectively) at each of these four stages. (b) Optical model of the exfoliated graphene sample, also showing p- and s-polarization of the light. θ: Incident angle. Si: Silicon. SiO2: Silicon dioxide.

The optical absorption of graphene is almost constant in the IR and partly in the visible range, as a consequence of its linear dispersion relation and 2D nature. In the UV range, however, the dispersion relation of graphene has a saddle point. As a result, in this region of the spectrum, the absorption of graphene has a distinct maximum, which has been experimentally observed by different optical spectroscopy techniques.8, 11–13 Compared to the independent-particle model, which does not include electron-hole interaction, this peak is significantly red-shifted (by 600meV) and asymmetrical. These effects are explained by the formation of an exciton at the energy of the saddle-point transition, and are phenomenologically described by the Fano resonant profile.6–8, 11,12 (This profile is a commonly used function to parameterize an asymmetrically shaped spectral line that arises from coupling between the band continuum and a discrete state.)

We obtained the optical properties of exfoliated graphene on a silicon/silicon dioxide (Si/SiO2) substrate in the visible range using the spectroscopic imaging ellipsometer nanofilm_ep3se made by Accurion. The advantage of null ellipsometry is that it measures angles with better than 0.01° precision, and not fluxes, thus ensuring higher accuracy and avoiding any nonlinearities introduced by the detector. We analyzed the measured spectra by an optical model based on Fresnel coefficient equations. We found the complex refractive index of graphene by point-by-point inversion and parameterized it using the Fano line-shape: see Figure 2. 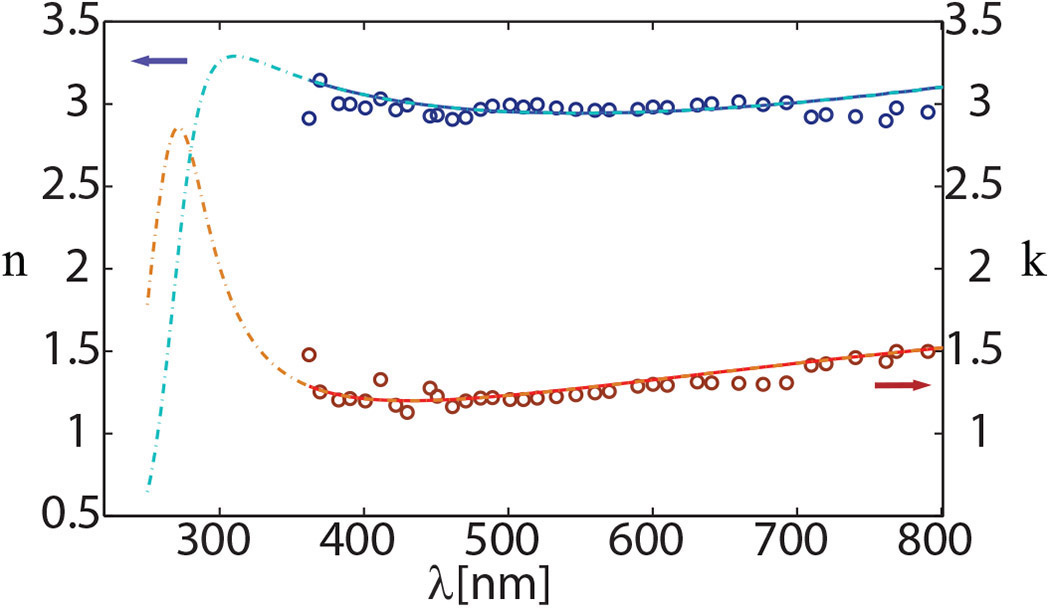 In addition to measuring the complex dielectric function of graphene, ellipsometry can be used to detect how graphene behaves in the ambient environment, or how different fabrication processes can affect its optical properties. We employed ellipsometric mapping to obtain the distribution of a water layer over the exfoliated graphene samples in ambient conditions: see Figures 3 and 4 for the measured data and the obtained fit results.7 We mapped the sample and the surrounding substrate with a spatial resolution of 1μm. For each point in the map, we measured the ellipsometric angles Ψ and Δ. These values were then used to reconstruct the spatial dependence of graphene and the water-layer thicknesses. Figures 3(d) and 4 show the distribution of the water layer on the sample. 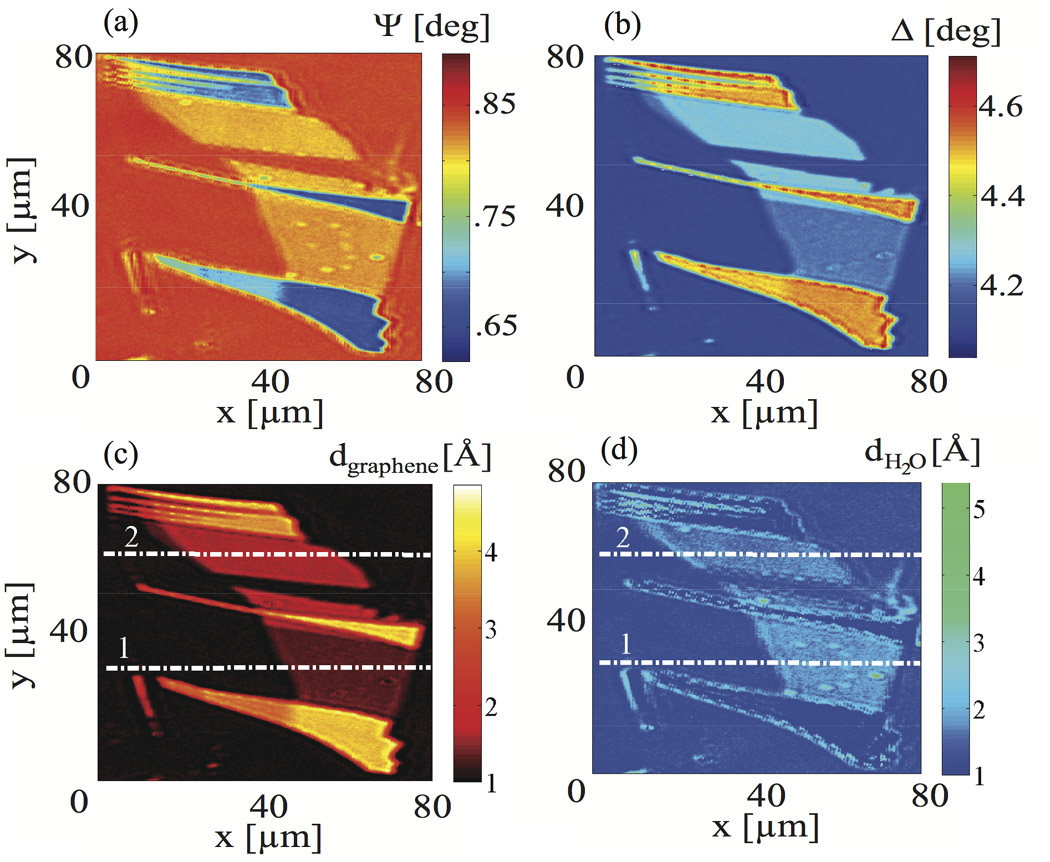 Figure 3. (a, b) Measured maps of ellipsometric angles Ψand Δ, respectively, in the exfoliated graphene sample region. Spatial coordinates x and ylie in the plane of the graphene layer: see Figure 1(b). Maps were measured at a fixed wavelength of 430nm and incident angle under 60°. (c, d) Calculated thickness maps for graphene and a water layer, respectively. Numbers 1 and 2 show the locations of the layer thickness cross sections, as shown in Figure 4, for single- and bi-layer regions of the sample with their corresponding water layers. (Reprinted with permission.7 Copyright AIP Publishing 2012.) 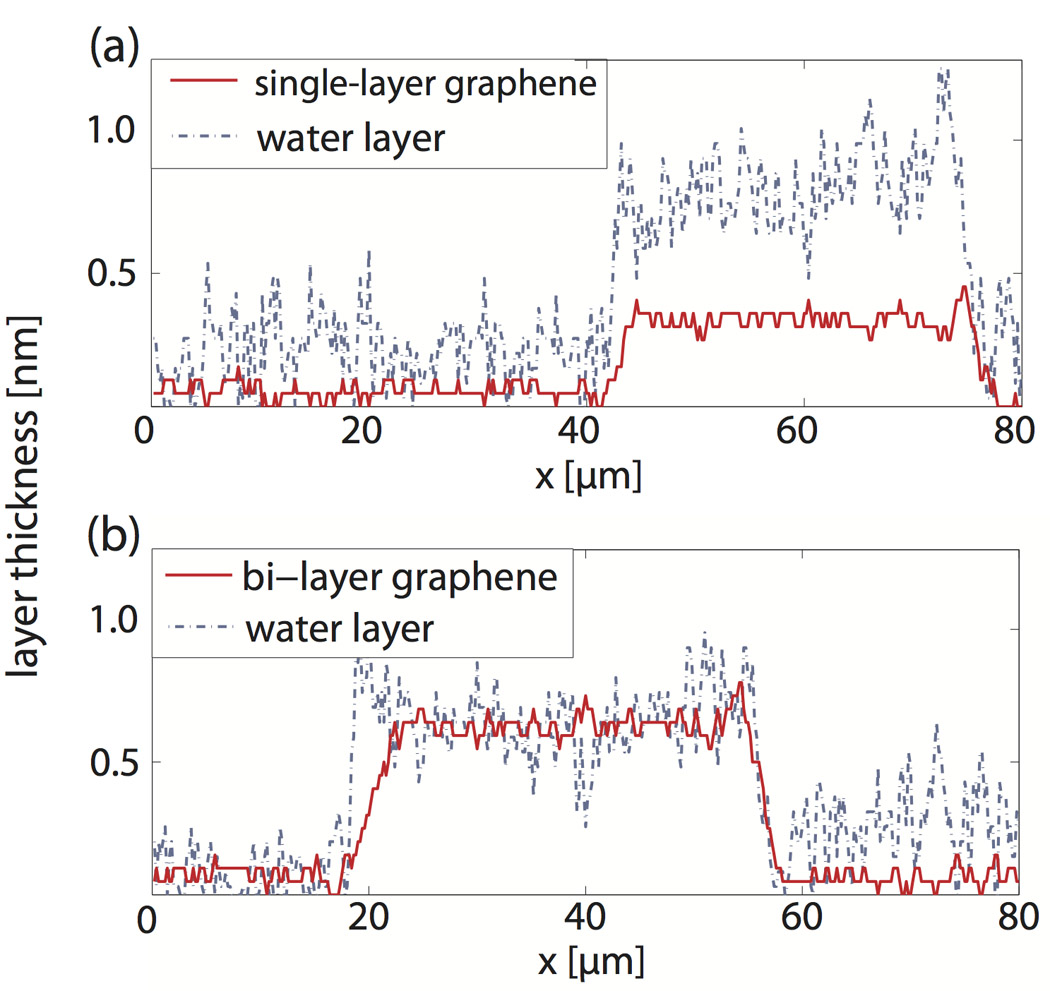 If graphene is to become a building block of future electronics, cost-efficient growth methods need to be developed. Current growth methods, such as chemical vapor deposition (CVD) or growth from silicon carbide (SiC), require graphene to be transferred to a desired substrate, and this process is a crucial fabrication step. If not done properly, it can greatly decrease the quality of the graphene layer. For this reason we have investigated the effects of transfer residue and sample annealing on the optical properties of CVD graphene transferred onto a sapphire substrate by a wet-transfer technique.8 We took ellipsometric measurements of CVD graphene using a SOPRA GES5E-IRSE spectroscopic ellipsometer in a rotating polarizer setup. The optical properties of graphene were obtained by point-by-point inversion in the visible and UV ranges (250–800nm). The results, comparing samples with and without transfer residue, show that a residue layer left on graphene after a transfer process can significantly increase its optical absorption (by an average of 30%) in the visible range: see Figure 5. 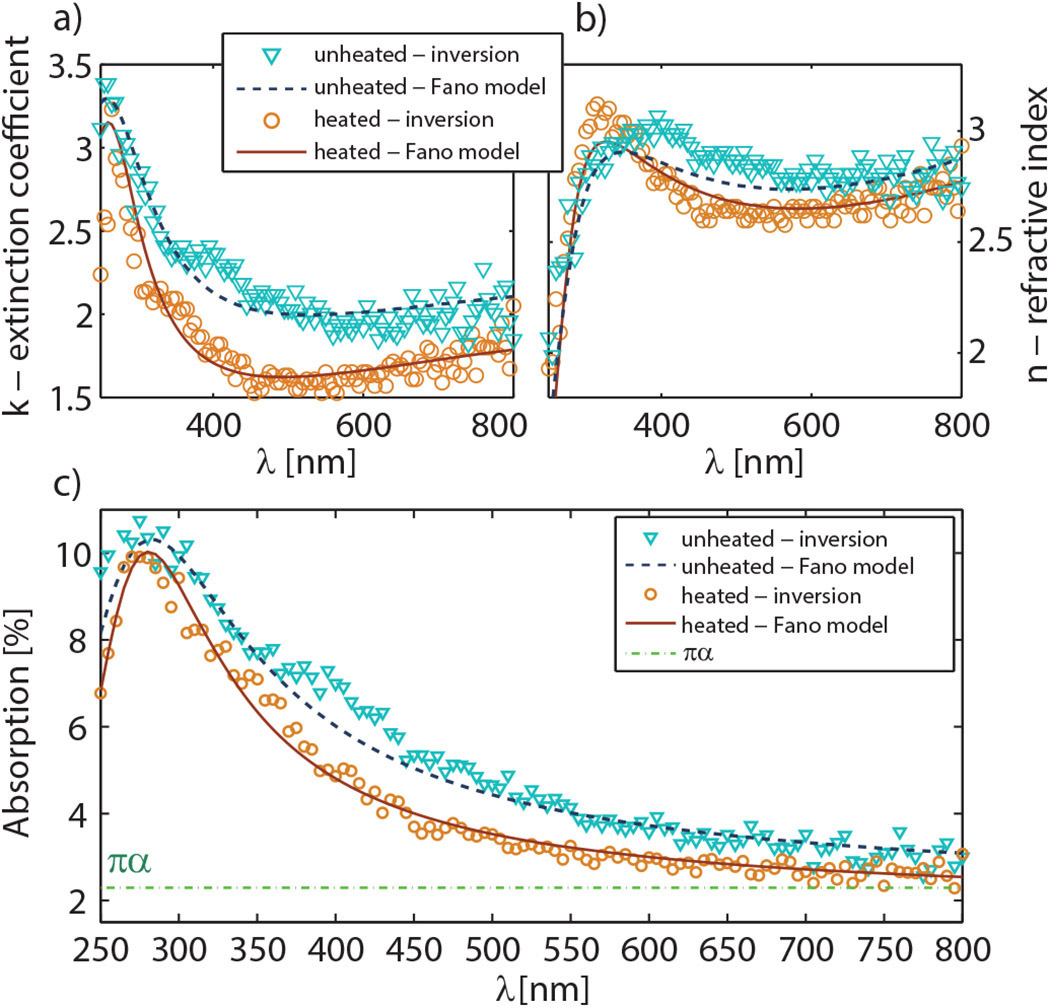 Figure 5. (a) Extinction coefficients, (b) refractive indices, and (c) optical absorption of transferred chemical-vapor-deposited graphene, comparing inversion data for samples with and without transfer residue (triangles and circles, respectively). Data was modeled by a Fano resonant profile for sample without (solid line) and with (dashed line) transfer residue. (Reprinted with permission.8 Copyright AIP Publishing 2013.)

In summary, we have used spectroscopic ellipsometry techniques to obtain the complex dielectric function of graphene. The complex refractive index of graphene was obtained by inversion, and a Fano model was used to parameterize the inversion data. Ellipsometric maps of exfoliated graphene showed the impact of a water layer on the graphene surface, which is most likely the result of exposing the surface to the ambient environment. Furthermore, our study of transfer residue and sample annealing on the optical properties of CVD graphene demonstrates that ellipsometry is a suitable tool for fast and nondestructive in situ control of the transfer process. We have shown that a residue layer left on graphene after wet transfer onto a dielectric substrate can significantly increase its optical absorption in the visible range, compared to the pristine sample. In future studies, we plan to investigate optical properties of graphene at various doping densities.

This work is supported by the Serbian Ministry of Science through project OI 171005. The authors are grateful to the European Union Seventh Framework Programme projects NanoCharM (NMP3-CA-2007-218570) and NIM_NIL (228637).

Radoš Gajić received his doctorate in physics from the University of Belgrade in 1993. He is a research professor, head of the Graphene Laboratory, and a coordinator of the OI 171005 national project.