Recent technological innovation in photonics and nanotechnology is stimulating the use of terahertz (THz) spectroscopic sensing systems in a wide variety of applications, including global environmental monitoring and homeland security. The THz region of the electromagnetic spectrum, however, remains largely unexplored. This is due to limited options for optical components, detectors, and tunable and powerful coherent sources.

Among the most robust and sensitive trace-gas detection techniques, quartz-enhanced photo-acoustic spectroscopy (QEPAS) is capable of record sensitivities in the mid-IR spectral range, with a compact and relatively low cost acoustic detection module.1 All QEPAS sensors reported thus far, however, exploit standard quartz-crystal tuning forks (QTFs), which have a resonance frequency of ∼32.76kHz and are characterized by a very small sensitive volume between their prongs (approximately 0.3×0.3×3mm3).2 Due to this small area, focusing the THz beam has represented the main limitation preventing the use of these QEPAS systems in the THz range (λ>50μm). Larger QTFs are therefore required for this purpose.

To focus the THz beam between the two prongs of the QTF without illuminating them, we employed a tuning fork with standard geometry, scaled to ∼6 times the size of a standard fork (see Figure 1). The custom QTF shows a quality factor in vacuum of Q0=146, 350 and a resonance frequency of f0=4245Hz, ∼8 times lower than that of standard QTFs.3, 4

Figure 1. Schematic of the employed custom quartz crystal tuning-fork (QTF) resonator. This QTF enables the focusing of a terahertz (THz) beam due to the larger area between its prongs (∼6 times the size of a standard tuning fork).

A schematic of our gas sensor QEPAS setup is shown in Figure 2. The laser source emits at 3.93THz, in resonance with a rotational-translational transition (change in energy level) of methanol with line strength S=4.28·10−21cm/mol. QEPAS is based on the photoacoustic effect (the conversion of light to sound in absorbing materials). Methanol, an important gas species, is useful for this purpose because the THz laser used is resonant with one of its main absorption levels. We used off-axis paraboloidal gold reflectors to focus the THz beam between the prongs of the tuning fork, which acts as an optoacoustic transducer. The 3D laser beam profile, measured using a pyroelectric camera, has a beam waist diameter of ∼430μm. This value falls well below the gap between the QTF prongs (∼800μm), allowing the beam to pass through without making contact.4 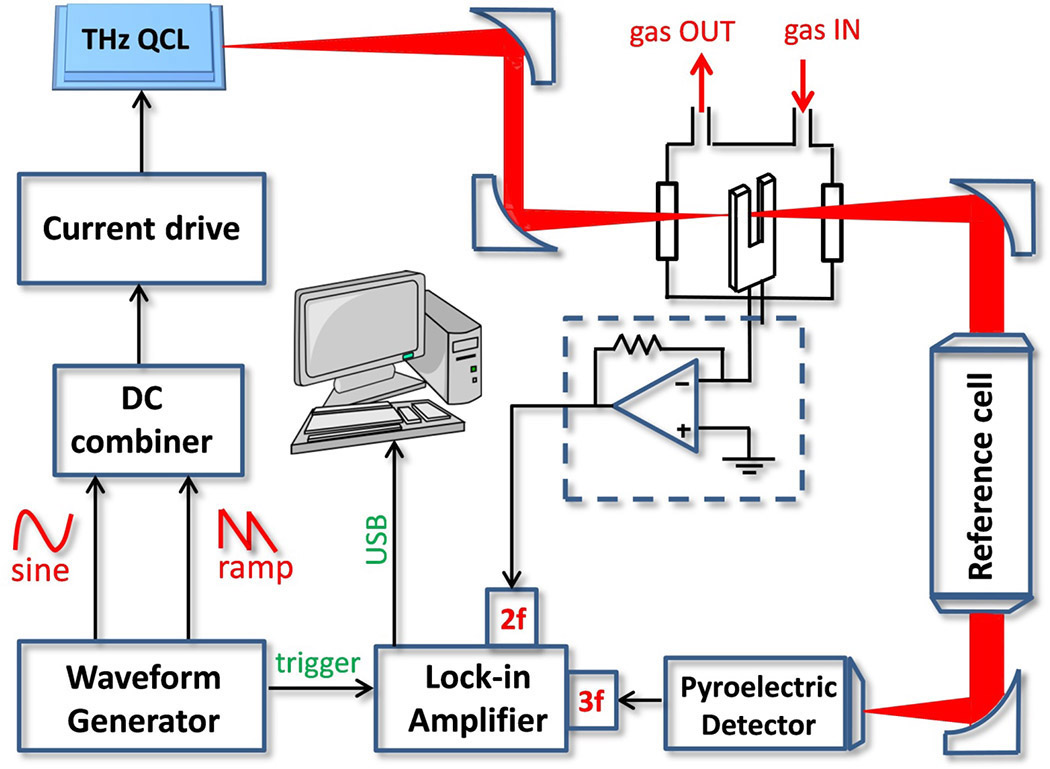 We performed the QEPAS experiments by applying a sinusoidal modulation to the quantum cascade laser (QCL) current at the QTF resonance frequency (f0), while detecting the QTF response at the same frequency using a lock-in amplifier. QEPAS spectral measurements were performed by slowly scanning the laser wavelength over ∼0.025cm−1. To obtain optical frequency modulation of up to 0.01cm−1, we added the sinusoidal dither at f0 to the low-frequency voltage ramp using a power combiner. QEPAS measurements in locked mode were performed by keeping the laser wavelength fixed on the absorption peak frequency and modulating its current at f0.

To determine the best achievable sensitivity of the QEPAS sensor, we performed an Allan variance analysis, measuring and averaging the QEPAS signal in locked mode.3 For a four second averaging time, we extracted a minimum detection sensitivity of 7ppm. This corresponds to a normalized noise equivalent absorption of 2·10−10cm−1W/Hz½, comparable with the best result obtained by mid-IR QEPAS systems. Since the energy of the incident laser light is very low (few milli-electron volts), rotational levels are primarily involved in THz absorption processes. Rotational-translational relaxation rates were found to be up to three orders of magnitude faster with respect to vibrational-translational relaxation. The QEPAS signal is strongly dependent on these energy relaxation rates because the gas requires enough time to dissipate all absorbed laser power before a new pulse arrives. The possibility of working with fast relaxing transition levels allows the device to operate at low pressure, thereby gaining high QTF Q-factors (several tens of thousands), increasing the selectivity and sensitivity of the QEPAS sensor system.

In summary, we have outlined the first demonstration of a QEPAS sensor employing a THz QCL source and a custom QTF. The geometry of the QTFs employed thus far in QEPAS systems has been optimized only in terms of resonance frequency, i.e., for timing applications. The next step will therefore be the fabrication of QTFs with improved geometry to increase sensing performance and detection levels.

Vincenzo Spagnolo received his degree and PhD in physics from the University of Bari and currently works as assistant professor of physics. His research interests include QCLs and optoacoustic gas sensors.