In addition to improving device efficiency, work on photovoltaics must focus on three aspects to be able to compete with fossil-fuel energy: material abundance, low cost, and high productivity.
27 November 2013
Chih-I Wu and Ching-Fuh Lin

Concerns about global climate change from fossil-fuel burning have resulted in increasing attention being paid to renewable energies, with solar power being a popular choice. However, because the amount of solar radiation reaching Earth's surface is limited, photovoltaic power plants require a high number of large solar panels to provide sufficient energy. Therefore, to succeed photovoltaics will require material abundance, low cost, and high productivity. In our work, we have focused on approaches that are likely to meet these three essential features.

Our first approach is to use organic materials for light absorption that are sandwiched between two inorganic layers, a structure that significantly improves the stability of organic solar cells.1–3 We showed that the power-conversion efficiency (PCE) in these photovoltaic systems remained at its best value for 15,420 hours without encapsulation. Further, we developed a solution process for the deposition of the top oxide layer that is connected to the anode electrode in the sandwiched structure. We have experimented with several types of solution-processed oxides, including vanadium oxide and tungsten trioxide, that work well for organic solar cells using poly[3-hexylthiophene-2,5-diyl] (P3HT) as the light-absorption material.1–6 For solar cells, using low-bandgap polymers like PBDTTT-C-T or molybdenum oxide (MoOx) works much better than other top oxides due to the higher work function of these materials. Solution processing also works for MoOx, but some treatments may influence its performance.

We also proposed and demonstrated a platform of sandwiched structures (see Figure 1) with zinc-oxide (ZnO) nanorods that can lead to high efficiency for various low-bandgap polymers. We discovered that a small variation in the growth conditions of ZnO nanorods can result in significant differences in device performance. With appropriate length, diameter, density, and spacing between nanorods, all low-bandgap polymers we used in the platform configuration provide a PCE of more than 7%. 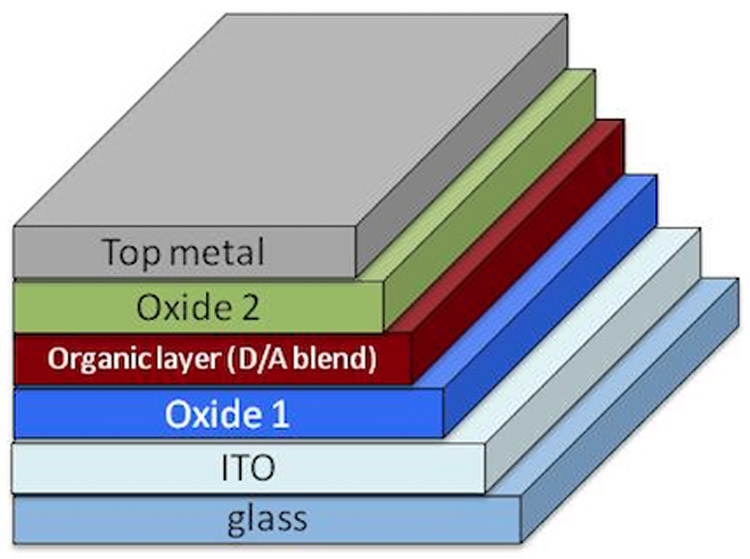 Our second approach is to combine silicon (Si) nanostructures with the organic materials to form heterojunction solar cells.7 This approach replaces some of the vacuum-process steps in the fabrication of crystalline-Si solar cells with a very low cost solution process in which the Si nanostructures are formed through metal-assisted chemical etching using silver as the catalyst. Controlling the shape and size of silver nanoflakes on the top of the Si wafer enables us to adjust the density or morphology of the Si nanostructures. This means we can form Si nanowires of different density or nanoholes of different sizes to achieve very low reflectance on the wafer. The density, morphology, and depth or length of the nanostructures are found to have strong influences on the device performance. Because the nanostructures provide a good light-trapping effect, we can reduce the reflectance to less than 4% and can make the short-circuit density as large as 38mA/cm2. However, the open-circuit voltage is still only about 0.5V, and the fill factor is less than 70% because of the increased surface area of the nanostructures, which results in large surface states. Surface passivation will be important to reduce the surface states to achieve over 17% of PCE from solar cells of this kind.

On the other hand, because the formation of high-quality crystalline Si consumes significant energy, it is important to reduce the use of silicon in solar cells. Consequently, we also developed a technique to lift off very thin films (with thickness between 5 and 20μm) from Si wafers or ingots.8 In a 15μm-thick film we tested, the absorption was 99% in the 400–800nm wavelength range and decreased to about 90% at a 912nm wavelength. Moreover, the film had very good crystal orientation, almost identical to the Si wafer. The rest of the wafer can be reused to form more single crystalline Si thin films, so the material cost can be reduced to only 1/10 of the original price or less.

To further improve the power conversion efficiency in either organic or organic/inorganic hybrid solar cells, it is crucial to understand interfacial charge separation and transport. In this regard, in addition to device optimization, we will dedicate our future work to studying the electronic properties and band structures at solar-cell interfaces and try to enhance the device performance through interfacial engineering.

Chih-I Wu received his PhD from Princeton University in 1999. In 2004, he joined the Graduate Institute of Photonics and Optoelectronics and the Department of Electrical Engineering of the National Taiwan University, where he works on organic optoelectronic materials.

Ching-Fuh Lin obtained his PhD in electrical engineering from Cornell University in 1993. He is now the director of the Innovative Photonics Advanced Research Center and a joint professor in the Graduate Institute of Photonics and Optoelectronics, the Graduate Institute of Electronics Engineering, and the Department of Electrical Engineering at the National Taiwan University. He is a Fellow of IEEE and SPIE, and a member of the Asia-Pacific Academy of Materials and the Optical Society.