A hybrid material of plasmonic nanoparticles and photoactive molecules shows that hot electrons can be extracted from plasmons in molecular electronic devices.
02 December 2013
Xi Chen and Dawn Bonnell

Plasmons are collective oscillations of electrons in solids, usually excited by light. They have been harnessed for many years, for example, in surface-enhanced Raman spectroscopy. However, during the last decade, the field of ‘plasmonics’ has emerged, in which structures and devices are designed to control light interactions by taking advantage of extremely high local electric fields generated by the plasmons. Recent experimental observations suggest that ‘hot’ (i.e., with very high kinetic energy) electrons resulting from dephasing of the plasmon oscillation might be extracted from nanoparticles and harnessed to increase the efficiency of photocatalytic reactions, dye-sensitized solar cells, solar panel technology, optoelectronic devices, and more.1–4

It is a challenge to determine whether hot electrons can be extracted from plasmons in molecular electronic devices. Under usual circumstances, hot electrons exist for only very short times (femtoseconds). In addition, the effect of possible hot electrons is difficult to distinguish from other possible effects. To allow us to use electron transport5 to discern the different contributions to photoconduction and ascertain whether hot electrons are being extracted, we have designed a hybrid material of plasmonic nanoparticles and photoactive molecules.

To extract hot electrons from the metal, we fabricated hybrid devices of gold (Au) plasmonic nanoparticles (NPs) linked with photoactive metalloporphyrin (MP) molecules: see Figure 1. We made random arrays of Au NPs on insulating glass substrates and then selected highly conjugated, multiporphyrin chromophoric wires (dithiol-PZn1) to interconnect the NPs, optoelectronically coupling the porphyrin molecules to Au surface plasmons and forming an ideal platform to study plasmon interactions with molecular junctions.6To generate plasmons, we directed light with the plasmonic wavelength of NPs at the device surface. We found that the optical interaction of the MP molecules and the Au NP plasmons greatly enhanced the photoconductivity of our devices. We investigated the mechanism of the enhancement by systematically altering the device structures, and this enabled us to confirm extraction of hot electrons.7 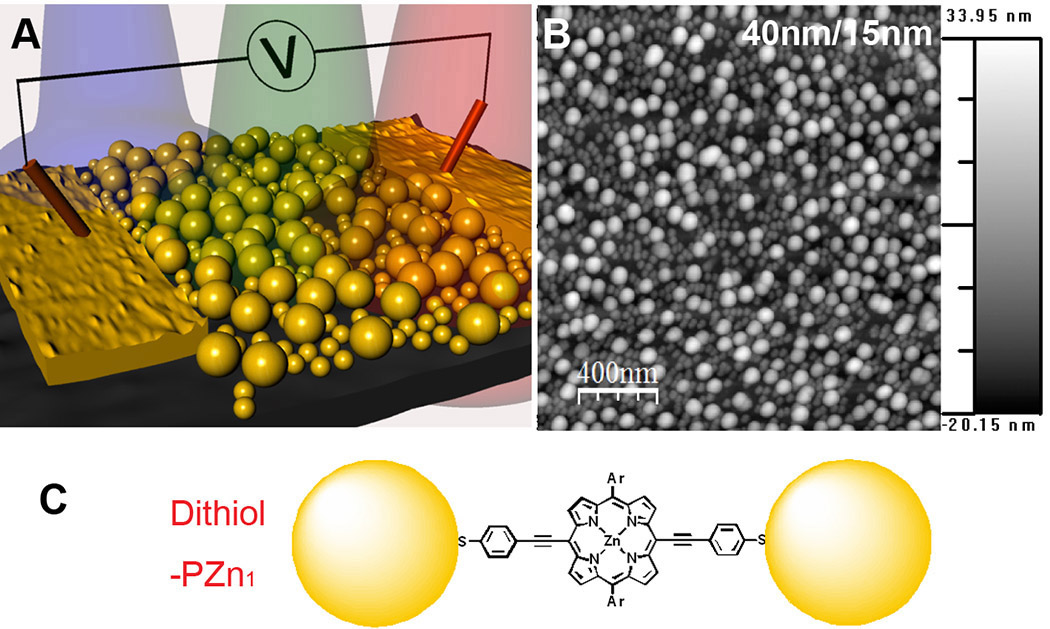 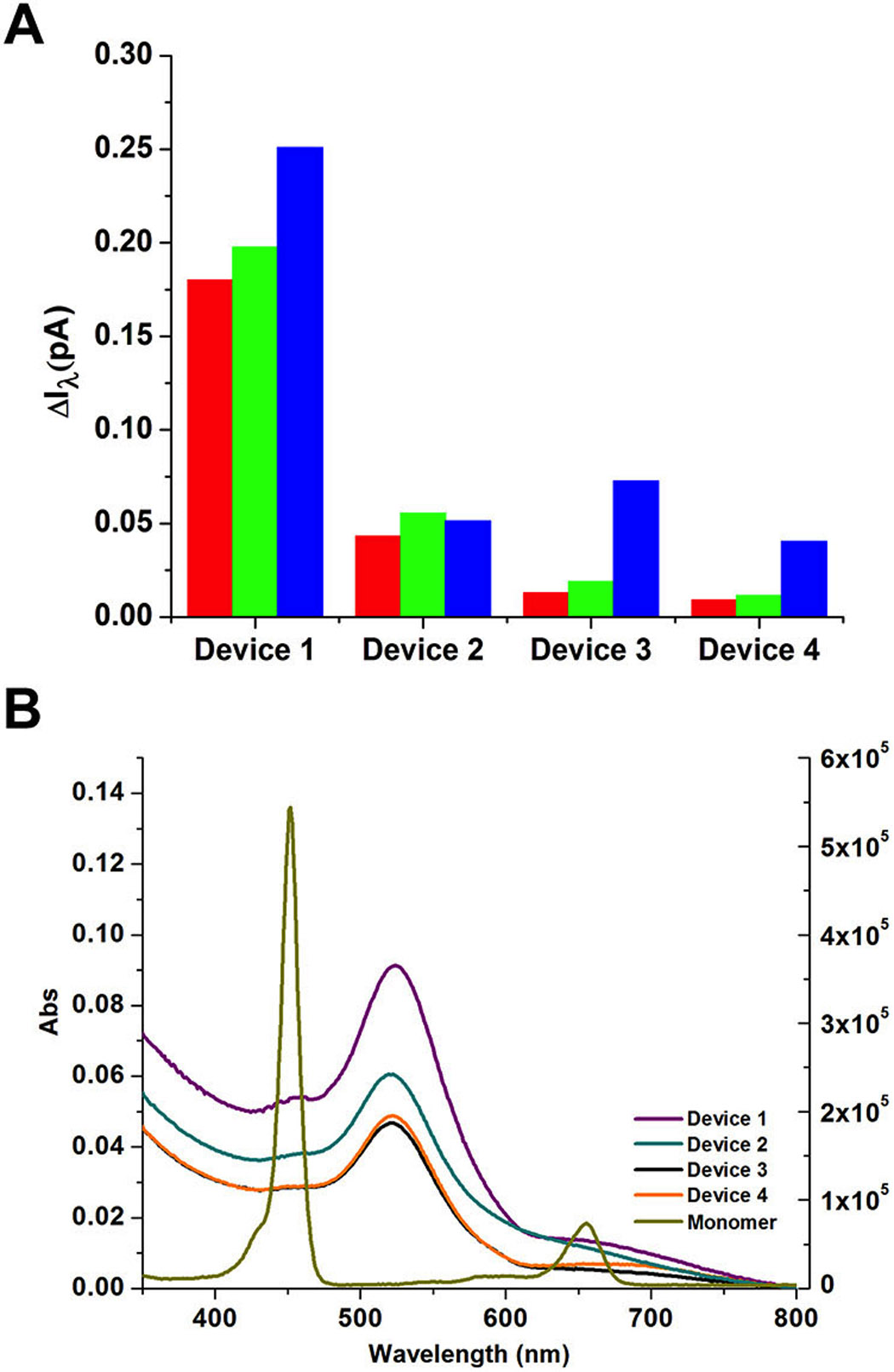 Figure 2. (A) Photocurrent enhancement at 180K while illuminated with 405nm (shown in blue), 533nm (shown in green), and 655nm (shown in red) light. (B) Optical absorption spectra of the four devices relative to the dithiol-PZn1(monomer) spectrum (right axis). (Reprinted with permission.7 Copyright American Chemical Society 2013.)

Figure 2(A) shows the photocurrent of four devices of dithiol-PZn1 linkers with illumination at three wavelengths. The photocurrent enhancement induced by blue light is the largest, and those induced by red and green light are smaller. Figure 2(B) shows the optical absorption spectra for the Au NP arrays and the dithiol-PZn1 molecule. The primary Au plasmon resonance peak is at ∼524nm with a secondary broad peak at 620–700nm, while the molecule manifests a strong absorption at ∼450nm and a quasi-allowed absorption centered at ∼650nm. The wavelength of the blue light overlaps with that of the molecular absorption, so that enhancement is due to traditional photoconduction, i.e., exciton formation in the molecule. The wavelength of the red light overlaps that of the plasmon and possibly that of the small molecular absorption in that range, so this case is ambiguous. However, in the case of the green light, there can be no molecular absorption and the photoconduction must be due to the plasmon interaction.

Photocurrent enhancement from surface plasmons could result from several possible mechanisms. By careful control experiments, we were able to rule out other possibilities such as a nanoantenna effect, lowering of the tunneling activation barrier, a local temperature increase, and photoassisted tunneling.7 Thus, we proved that plasmon-induced hot electrons are a major contribution to the photocurrent with illumination at plasmon resonance frequency. Our results show that hot electrons can be extracted in a molecular electronic device by imposing an electric field between the NPs.

In conclusion, hot electrons can be induced and extracted from surface plasmons, and exploited in molecular optoelectronic devices. The high efficiency of hot electron generation means it could significantly impact a range of technologies such as optoelectronic transducers in optical communications systems, optical circuit filters, and energy harvesting. It is possible to tune transport mechanisms and optical interactions in our novel hybrid device and engineer a wide range of device properties with careful selection of NP material, size, and coverage, and of molecular linkers with different optical and electronic properties. Our future research will focus on quantifying hot electron generation in controlled device platforms to gain insight into the mechanism. We will also directly determine the electronic structure of the molecules when attached to metal electrodes.

Xi Chen is a PhD candidate in materials science and engineering. He received his BS (2008) in physics from Peking University, China. His research interests include the impedance behavior of a single molecule/molecular monolayer under electrical and optical fields at interfaces.

Dawn Bonnell is a professor of materials science and vice provost for research. Her group focuses on atomic processes at surfaces, and has over 250 publications. She is a fellow of AVS, the American Ceramic Society, and the American Association for the Advancement of Science, and is a member of the National Academy of Engineering.