The first observations of a white dwarf transiting a red dwarf have been made using the Kepler space telescope.
18 November 2013
Philip S. Muirhead

To date, gravitational lensing has been observed in galaxies and galaxy clusters, within the Milky Way as stars pass between Earth's line-of-sight to more distant stars, and in eclipsing binary white dwarf stars (dense stellar remnants).1–3 Light from the source is bent by the lens, and the source appears to originate from two separate locations. These locations occur at a characteristic angular distance from the lens, known as the Einstein radius. When the lens and source almost overlap in the sky, the source appears to be stretched out into an ‘Einstein ring’ (see Figure 1). In both cases, more photons from the source are observed than if the lens were not present. This leads to a net amplification of the source brightness. In some situations, the double source image or the Einstein ring is directly imaged (as in Figure 1). In other cases, the source is unresolved but the net amplification of the source brightness is observed. 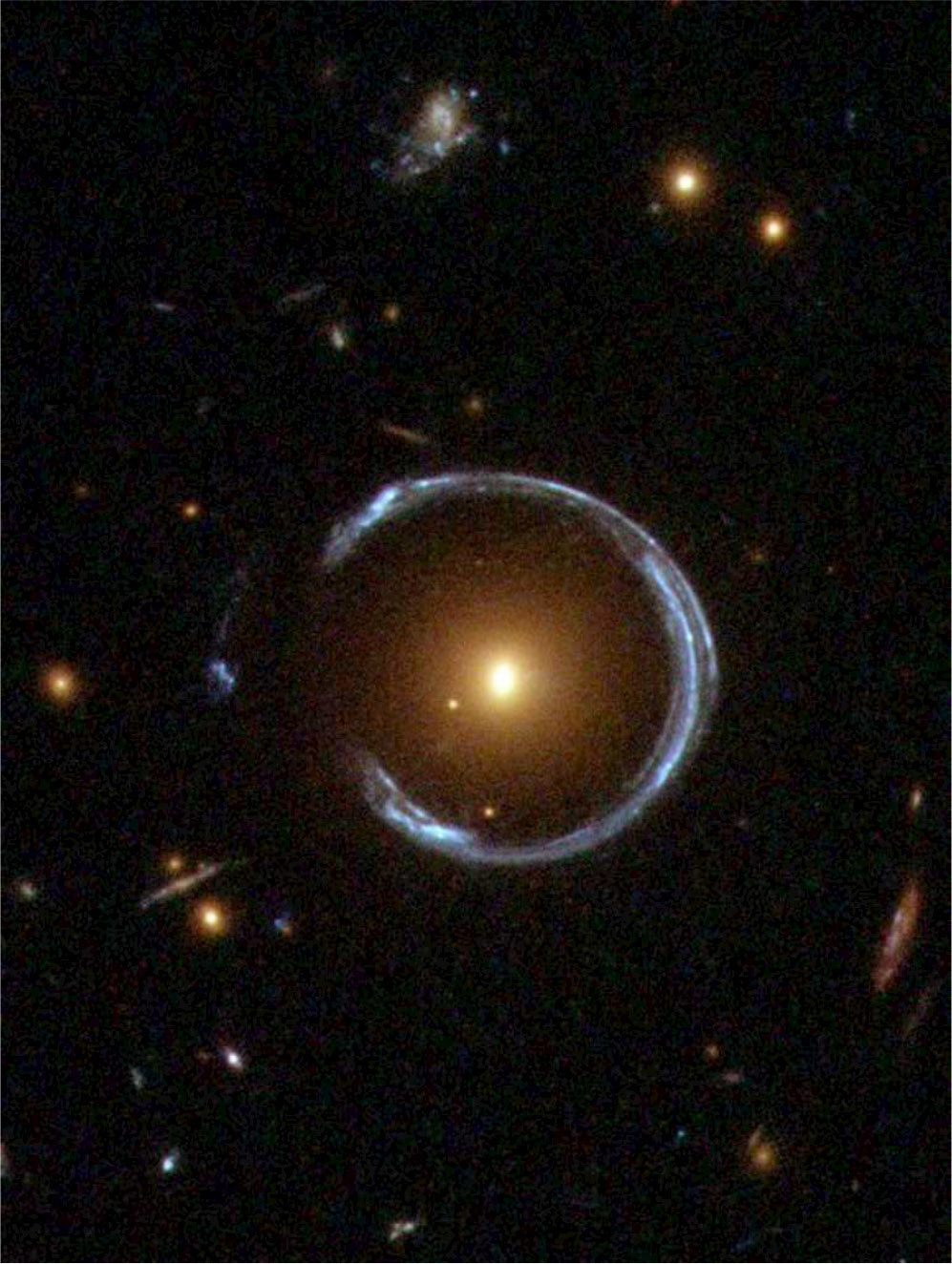 We have observed gravitational lensing in an object that was originally detected by NASA's Kepler mission, which is a wide-field survey for transiting extrasolar planets. We were using the Kepler data to study red dwarf (small and relatively cool) stars with transiting planets. A particular Kepler object of interest—KOI-256—appeared to have a transiting Jupiter-sized planet. Typically, transiting Jupiter-type planets create smoothly varying light curves, with ingress/egress times of about 10 minutes. However, the light curve from KOI-256 was sharp (see bottom left panel of Figure 2) and had a very short (90 seconds) ingress/egress time.4

The peculiarities of this object's light curve led us to suspect that the signal was due to a white dwarf passing behind the red dwarf, i.e., an occultation, rather than to a transiting planet. We were able to confirm this with subsequent radial velocity measurements we made with the Hale Telescope at Palomar Observatory. Our measurement of the red dwarf's Doppler shift indicated the presence of a very massive companion, such as a white dwarf, rather than a planet. 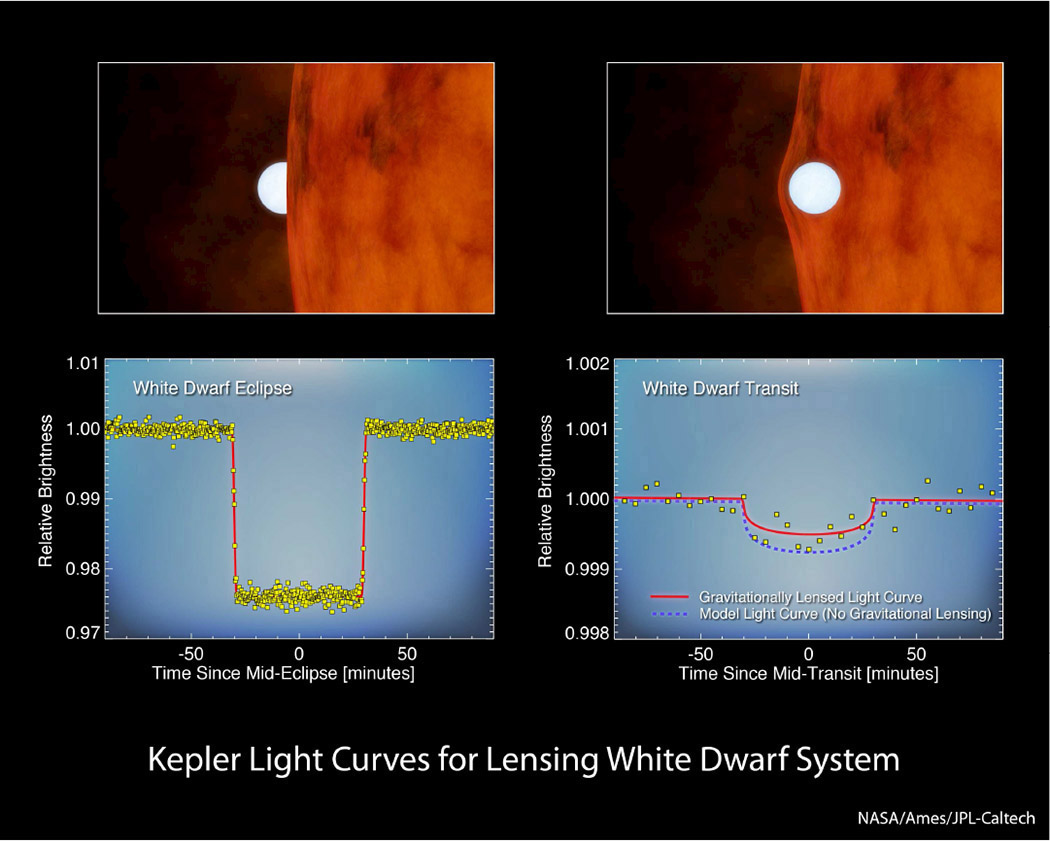 We examined the light curve midway between two occultation events, i.e., when the white dwarf was expected to transit in front of the red dwarf. Although we observed an obvious dimming of the light signal, the dimming was less than expected (see bottom right panel of Figure 2). We have calculated that the transit dip was affected by gravitational lensing. The white dwarf was both shadowing light from the red dwarf and slightly amplifying it. When we incorporated the lensing, and the Doppler shift measurements, into our models for the transit and occultation light curves, we were able to empirically determine the mass and radius of the white dwarf (such empirical calculations are very rare for white dwarfs).

The mass and radius we determined for KOI-256 are consistent with stellar evolutionary models. This star is dominantly made of carbon and oxygen, and was likely to have been a bright, A-type star when it was still burning hydrogen. This object provides a benchmark that we can use to calibrate our stellar evolution models. Our findings are largely enabled by the impressive photometric precision of the Kepler spacecraft, before its recent pointing system failure.

Our first detection of gravitational lensing during the transit of a white dwarf across a red dwarf is an impressive addition to the legacy of the Kepler mission. Our future work will include searching the Kepler data archive for similar objects. We hope to find a statistically significant group of lensing red dwarf–white dwarf systems so that we can empirically probe their underlying physics.

This work was supported by a NASA Hubble Fellowship grant (HST-HF-1326.01-A) awarded by the Space Telescope Science Institute, which is operated by the Association of Universities for Research in Astronomy under NASA contract NAS 5-26555.

Philip Muirhead received his PhD in astronomy and space sciences from Cornell University in 2011. Since then he has been a postdoctoral scholar at the California Institute of Technology and is currently a Hubble Postdoctoral Fellow. His primary research involves astronomical instrumentation, low-mass stars, and extrasolar planets.