Constantly increasing energy demand has led to much attention being devoted to converting abundant solar energy to electricity. Dye-sensitized solar cells (DSCs) are a promising technology for renewable energy, thanks to their low cost, ease of fabrication, and good conversion efficiency.1,2 Solar cells work well only in good light intensity, but light levels vary throughout the day and are low indoors. DSCs have the advantage of working relatively well even in diffuse lights, which is good for practical and indoor applications. However, it would be good to improve their efficiency further at low light levels.

Recently, redox mediators based on [Co(bpy)3]2+/3+ (where Co is cobalt and bpy is 2,2'-bipyridine) have emerged as promising redox couples that offer high photon-to-electron conversion efficiencies and high photovoltages: see Figure 1.3,4 However, these redox couples display a few electrolyte problems, such as high cell resistance, a low diffusion coefficient, and rapid recombination loss rates. To overcome these limitations, we have introduced an ion-conducting polymer into DSC electrolytes. Polymers with a high dielectric constant, such as poly(vinylidine fluoride) (PVDF), may help ionization of salts, and hence provide high concentrations of charge carriers, resulting in an overall increase in photocurrent. 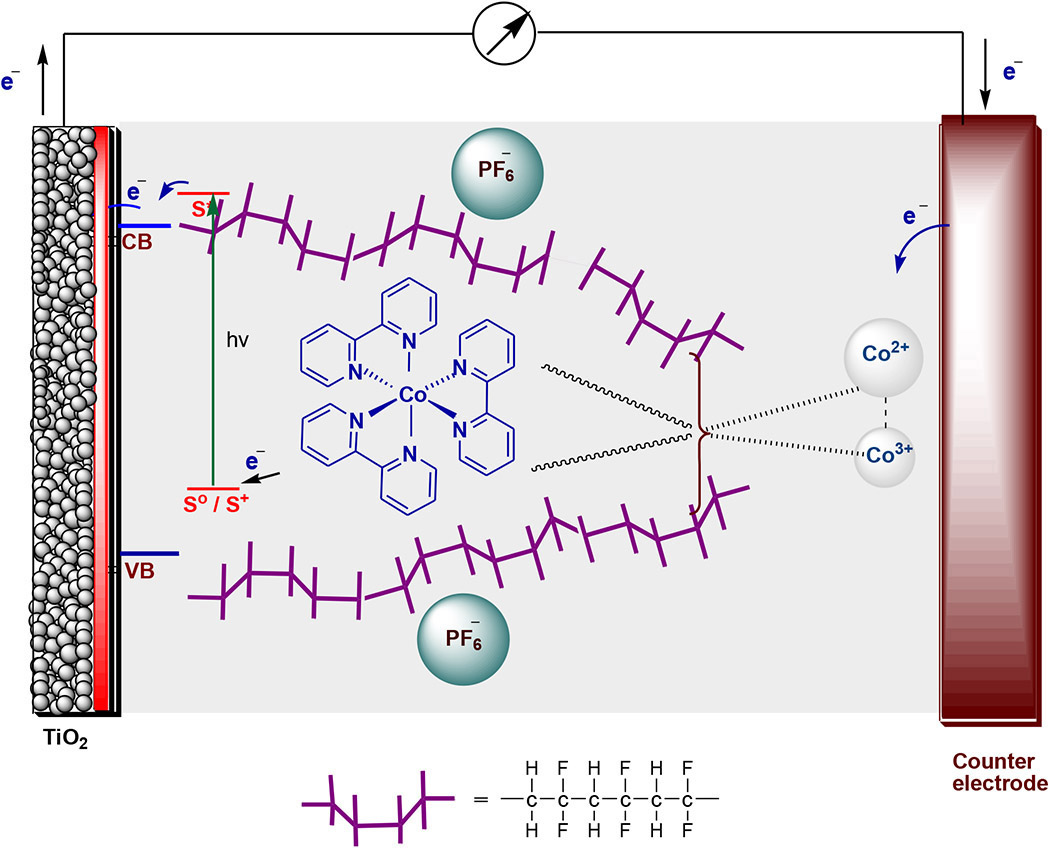 We prepared cobalt-based electrolyte impregnated with PVDF, and we made thin titanium dioxide (TiO2) mesoporous films on fluorine-doped tin oxide conducting glass for these electrolytes. We prepared the counter electrode and DSCs by standard methods5 and characterized the DSCs by measuring their current-voltage (I–V) curves and incident-photon-to-current efficiency (IPCE), by making transient electron measurements, and by using electrochemical impedance spectroscopy (EIS), some other spectroscopic techniques, and cyclic voltammetry.

We used the I–V and IPCE measurements to derive photovoltaic performance data. At one-sun light intensity, cells containing the M1 electrolyte exhibited an efficiency of 5.7% and those with the P1 electrolyte 6.4%. The P1 cells had an efficiency of 8.1% at 0.1-sun light intensity, which is promising for indoor or low-light applications. The fabricated cells kept at ambient conditions, in the dark, show no notable loss in conversion efficiency even after 1000 hours, which shows that the chemistry of the cells is inherently stable.

We performed transient electron measurements by recording the DSCs' photovoltage response to a modulated light source under bias light conditions. We plotted the electron lifetime against voltage, and found that under open-circuit conditions (zero current) the values from the P1 and M1 DSCs are highly similar, showing that the quasi-Fermi level of the TiO2 film in both the systems are basically the same. The curve obtained from DSCs containing P1 shows longer electron lifetimes at lower voltages, indicating lower recombination loss rates. The longer lifetimes observed are also consistent with a higher photocurrent, as evidenced in the I–V measurements of the P1 cells. A plot of extracted charge as a function of open-circuit potential also shows that DSCs containing P1 display significantly more collected charge than those containing M1.

We also performed impedance spectroscopy on the DSCs under an applied bias potential. Different regions of complex impedance (Nyquist) plots of DSCs containing P1 and M1 provide information on the resistance of different parts of the system under test: see Figure 2. For instance, close to the origin the plot provides information on the resistance of the conducting glass. An initial small peak near the origin of Figure 2 (not visible at the scale shown), shows that P1 and M1 have the same resistance at the counter electrode–electrolyte interface. The global maxima for the plots of P1 and M1 reveal an obvious difference in the electron recombination resistance, and finally, a hint of a third maximum at higher levels of the real part of the resistance shows that the diffusion resistance differs between P1 and M1. As mentioned, polymers with a high dielectric constant, such as PVDF, may help ionization of salts, and hence provide high concentrations of charge carriers, which would account for the effects we observed with the resistance. 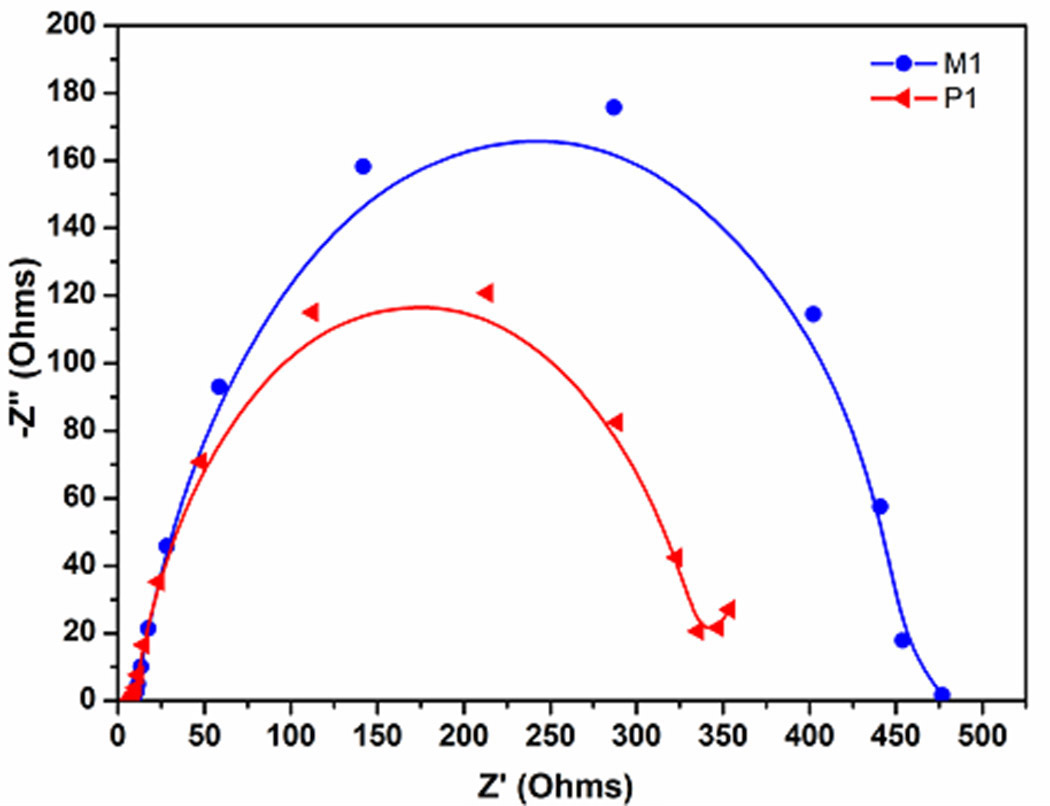 We found diffusion coefficients of the cobalt redox mediators from diffusion-limiting current experiments based on slow-scan cyclic voltammetry at 25°C. We calculated them as 1:82×10 6cm2s 1 for [Co(bpy)3]3+ for the M1 electrolyte and as 4:10×10−6cm2s−1 for the P1 electrolyte.

A possible explanation for the observed high mobility of Co(III) ions in the presence of a polymer additive is suggested by our dielectric studies and diffusion coefficients. The conductivities of M1 and P1 calculated from the impedance studies were 3:29×10−5Scm−1 and 6:97×10−5Scm−1, respectively. We know that the addition of polymer may increase ion mobility in lithium-ion battery electrolytes. It has been speculated that changes in the electric and dielectric properties of our systems may result from ion-pair dissociation, but it is difficult to prove by direct experimental measurements that this mechanism is responsible.5, 6 An alternative possibility would be a Grotthuss-like mechanism, but studies of similar effects in iodine-based polymer-supported electrolytes found evidence to support an explanation based on a high degree of ion-pair dissociation.6

In summary, we have explored how the use of polymer-containing media with cobalt redox mediators affects the efficiency of dye-sensitized solar cells. Our polymer-based DCSs (P1) yielded an efficiency of 6.4% at one-sun irradiation, outperforming the analogous device without a polymer additive (M1) by a factor of 1.12. Their efficiency of 8.1% at 0.1-sun irradiation is promising for indoor applications. We hypothesize that adding polymer promotes ion-pair dissociation and hence plays an important role in increasing the ionic mobility.

The new polymer-based cobalt redox mediator sidesteps the usual setbacks associated with cobalt-based electrolytes, such as high cell resistance, low diffusion coefficients, rapid recombination losses, and to some extent mass-transport limitations. We conclude that cobalt-based electrolytes may have a bright future in DSCs. We are now exploring new ways to generalize the use of ion-conducting polymers to other electrolytic systems in DSCs. We are also looking to further improve the electrolyte composition to enhance performance and working to produce a robust device suitable for commercialization.