Photovoltaic (PV) cell and module performance is often expressed in terms of electrical power efficiency, with a simple definition being maximum power delivered to a load divided by the incident
light power. Efficiencies surpassing 60%, defined this way, have already been demonstrated for some cells, for the special case of laser illumination at optimal wavelengths and irradiance level at low temperatures.

Solar power applications require conversion of wavelengths over a much wider spectral region, however, so procedures have been established and standardized that specify how to measure efficiency for flat-plate and concentrator devices. These procedures rate the efficiency at a reference temperature (25°C), total irradiance (1000W/m2), spectral irradiance (ASTM G173 or IEC 60904-3 international standards), and for a given area.1–3 Together, these conditions constitute the ‘peak watt’ rating, although real-world devices rarely, if ever, operate under such conditions. Independently confirmed efficiencies are summarized in websites and periodicals.4, 5

Some of the most challenging cells to calibrate are very-high-efficiency multijunction concentrator cells, which have efficiencies (under solar illumination) of more than 40%. To maximize conversion efficiency, these solar cells are designed as multiple cells connected in series that collect light from different regions of the solar spectrum. Assessing their efficiency requires the single-junction measurement procedure to be applied to each junction. To date, most independently measured efficiencies for cells with more than two junctions have been under illumination that overdrives (i.e., results in excess photocurrent across) the third junction— the lowest cell that collects the longest wavelengths— relative to the other junctions. We have shown that this inflates the true efficiency: see Figure 1, which compares the normalized efficiency versus concentration ratio (incident light intensity) for three different setups. These are a spectrally adjustable ‘one-sun simulator,’ a type of flash concentrator simulator called a high-intensity pulsed solar simulator (HIPSS), and a spectrally adjustable concentrator simulator called a terrestrial high-intensity pulsed solar simulator (T-HIPSS). 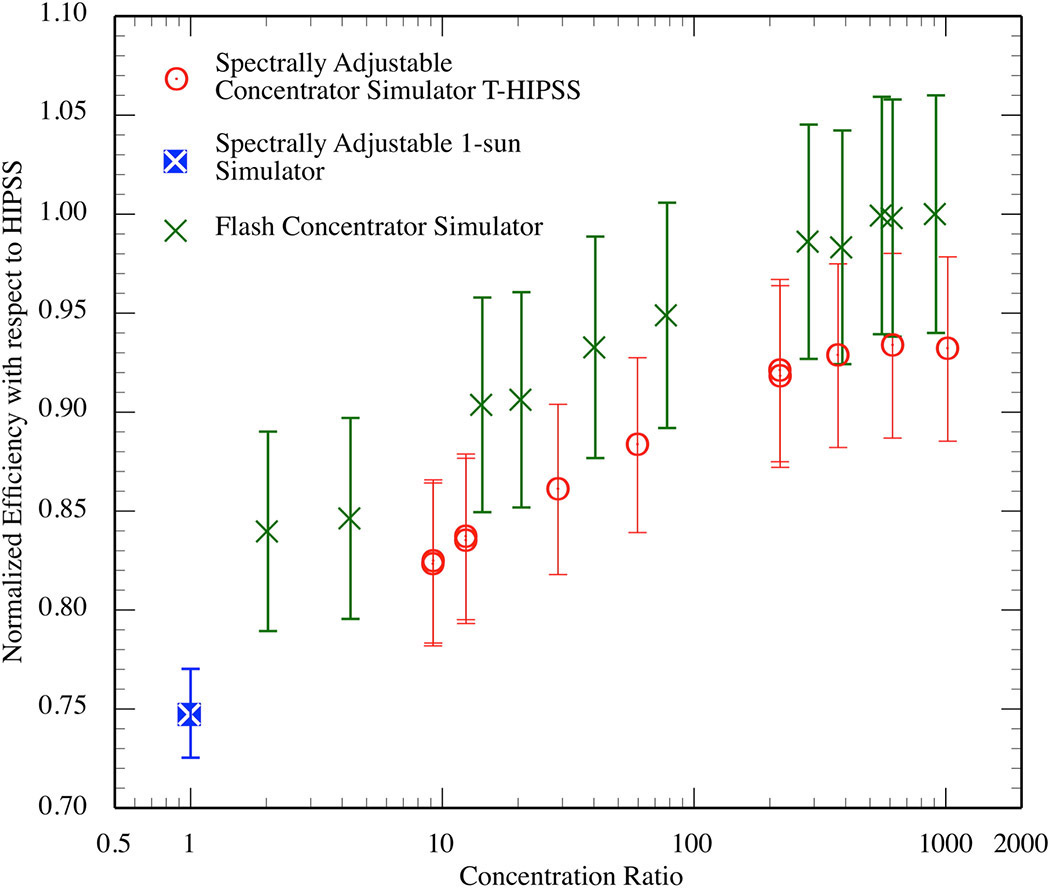 Figure 1. Normalized efficiency versus concentration ratio (incident light intensity) for a solar cell with over 40% efficiency, indicating that an inflated value for efficiency results from not adjusting the spectrum for all three junctions. Our method corrects this problem for accurate measurement of efficiency. HIPSS: A type of flash concentrator simulator called a high-intensity pulsed solar simulator. T-HIPSS: Tunable high-intensity pulsed solar simulator. 1-sun simulator: Spectrally adjustable light source that approximates the solar spectrum.

A one-sun simulator uses a light source that approximates the solar spectrum. The data acquisition system measures the current versus voltage characteristics to compute the maximum power and efficiency, and the light level is set to be equivalent to illuminating the sample under the standard solar reference spectrum at a total irradiance of 1000W/m2. The spectrally adjustable one-sun simulator allows the intensity of light to be independently adjusted in nine wavelength regions across the spectrum that correspond to the response range of component junctions in a high-efficiency multijunction PV cell.6, 7 However, it is a challenge to obtain this kind of power density uniformly over a large area. For this simulator it is 81cm2 with better than ±2% spatial nonuniformity in each spectral band.

A flash concentrator simulator uses one or more xenon flash lamps and mirrors to achieve a light intensity (concentration ratio) up to several thousand suns with a duration of 3– 30ms, depending on the unit, to simulate the solar spectrum. It has a similar data acquisition system to that of the one-sun simulator, and the HIPSS is a subset of the flash concentrator class of simulators. Different testing groups adjust the light differently using some combination of lamp voltage, mesh filters, and apertures. The data acquisition system does not know how many junctions are being tested. For simulators like the HIPSS, the only adjustable parameters are the total light level (controlled with mesh filters or apertures) and the change in spectrum with lamp voltage. Most groups do not use the change in spectrum with lamp voltage to adjust the spectrum, but at best this method will only work properly for a two-junction cell. Cells with more than two junctions will have an error resulting in an inflated efficiency because of overdriving the other junctions.

We used the T-HIPSS (Spectrolab model 460)8 to get the light level correct within 1% for all junctions. The total and spectral irradiance of the light were both adjusted so that the generated current for each subjunction in the multijunction stack is at the correct level. Our measurements result in lower efficiency values than those from other methods that do not use a spectrally adjustable simulator. Figure 1 shows a 4% relative decrease in efficiency compared to the spectrally adjustable one-sun and HIPSS previous, less accurate methods where only two junctions are set correctly and the others are overdriven.

Figure 2 compares these more accurate T-HIPSS results, with less accurate HIPSS data, where the spectrum is adjusted so that two of the three junctions operate within 1% of their correct photocurrent.8 (The fill factor is a normalized indicator of how ideal the current or power versus voltage characteristics are, and represents the maximum power divided by the product of the open-circuit voltage and short-circuit current.) As can be seen, our measurement method provides scientists and end-users with more realistic, less misleading values of the true efficiency of these multijunction devices. 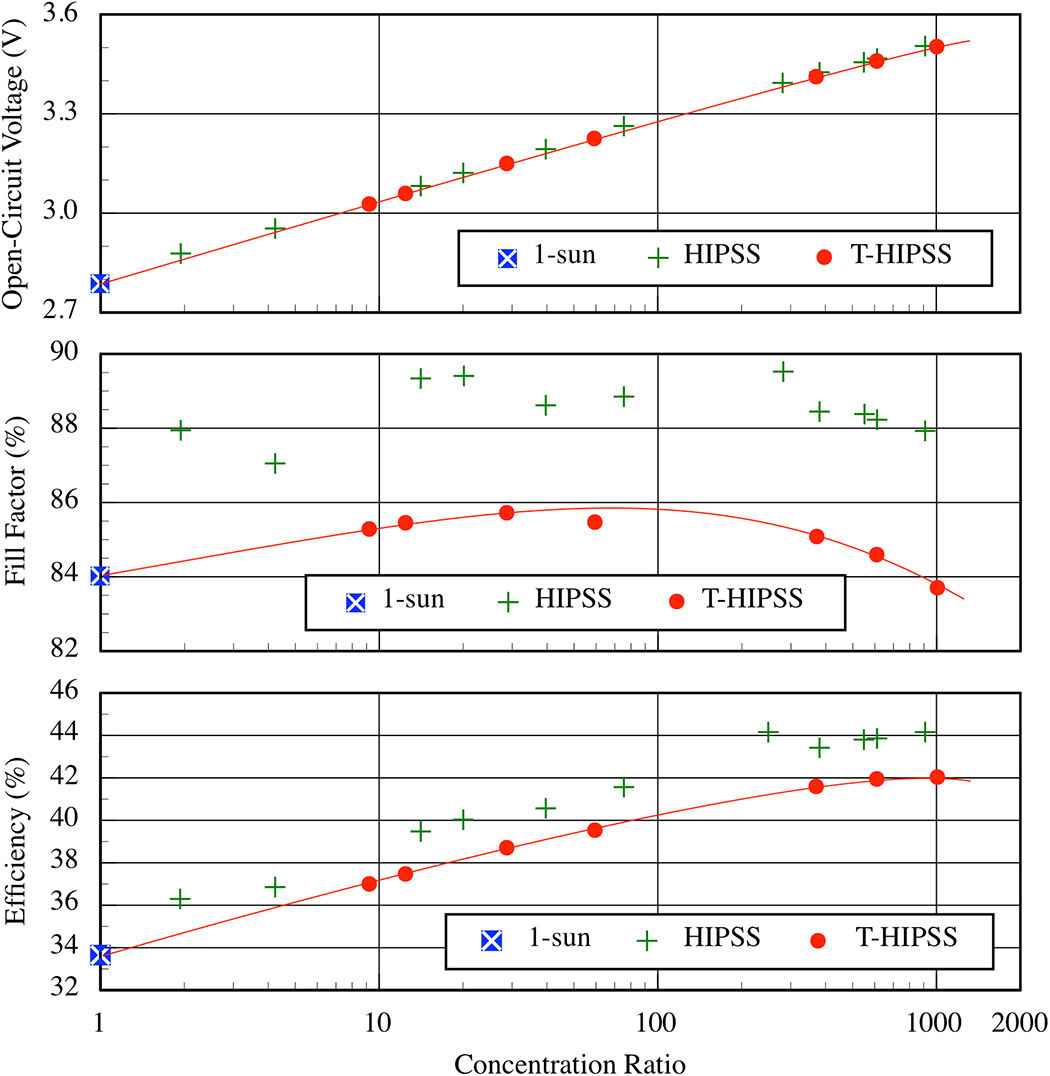 In the next year or so, as international labs adopt these more accurate procedures for evaluating concentrator cells, one consequence will be that there will probably be no new record efficiencies over 40%. We will also pursue ways to meet other challenges that remain in evaluating high-efficiency cells, such as determining the collection or quantum efficiency under concentration.