The proliferation of mobile applications using radio frequencies (RFs) has accentuated concerns about the adequate availability of RF bands and the limits of transmission capacity in mobile telecom networks, as well as the data security issues involved.1, 2 Visible light communication (VLC) would use free-space optical data links based on LED luminaires. This innovative technology offers a promising alternative to RF, since it combines the illumination functionality with data transmission by in-parallel modulation of the light intensity. In a previous report we briefly described the advantages and potential applications, such as wireless hotspots, of the VLC concept.3 It should be emphasized that VLC is best suited as an additional option for data links where RF networks are not desired or not possible. The vision of luminaire-based bidirectional optical data transmission is commonly denoted as ‘optical Wi-Fi.’

To make the optical Wi-Fi vision happen, high-speed VLC links need to be developed. At this juncture, the modulation bandwidth of commercially available high-brightness LEDs and the best ways to use them are of special interest. Recent research yielded insights into diverse concepts of VLC data transmission using phosphorescent as well as RGB (red, green, blue)-type white-light LEDs originally developed for illumination purposes.4 Lab experiments based on off-line signal processing revealed the promising modulation potential of such LEDs for both single-channel transmission and wavelength division multiplexing. For example, we realized aggregated data rates up to 1.25Gb/s with high-power LEDs.5 Another group has reported 3.4Gb/s using less powerful devices.6

VLC can be applied in various lighting scenarios. An important parameter with regard to high data rates is the availability of a line-of-sight (LOS) optical link—see Figure 1(a)—while non-directed LOS transmission or diffused lighting is likely to limit the achievable data rates: see Figure 1(b) and (c). As the lighting scenario may vary, a dynamic rate adaptation appears necessary in order to achieve a robust VLC link.7, 8

The maturity of VLC technology for all its potential applications must be proven with real-time implementation, which was our research focus recently. The very first high-speed VLC real-time system demonstration with 100Mb/s net data rate was presented in February 2011 at France Telecom's Orange lab facilities.9 Later in 2011, a TED presentation by Harald Haas including live demonstration of the VLC technology revealed this innovation to a wider public.10

More recently, we developed a bidirectional high-speed real-time VLC system, presented schematically in Figure 2. It operates currently in half-duplex mode based on time division duplex. Rate-adaptive orthogonal frequency division multiplexing (OFDM) is implemented with feedback via the reverse link. The transceivers are equipped with proprietary VLC transmitter and receiver modules providing a modulation bandwidth of up to 180MHz. These transceiver modules can operate without active cooling and offer 1000BASE-T Ethernet interfaces. Meanwhile, there is a second generation of prototypes with a reduced form factor (see Figure 3, right). 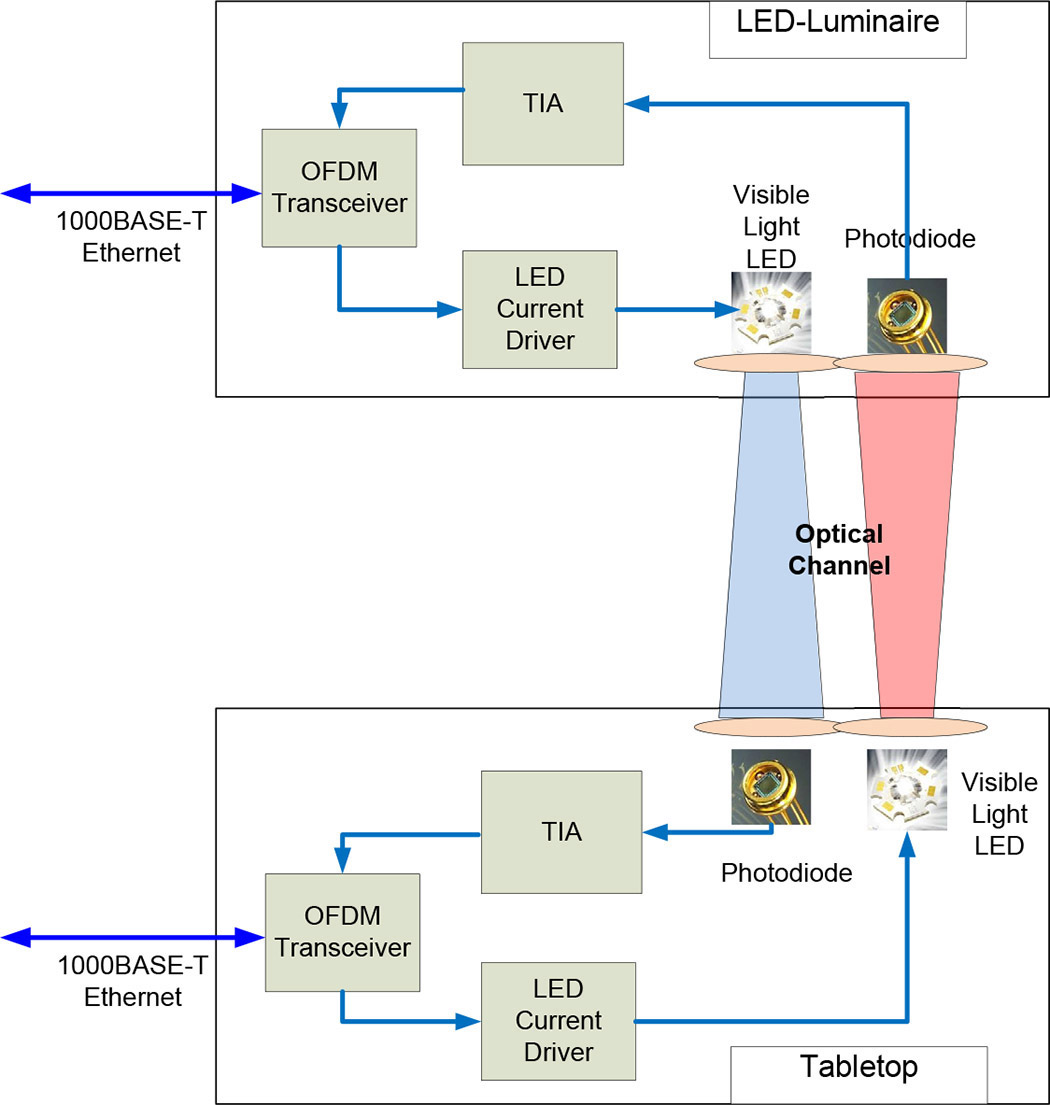 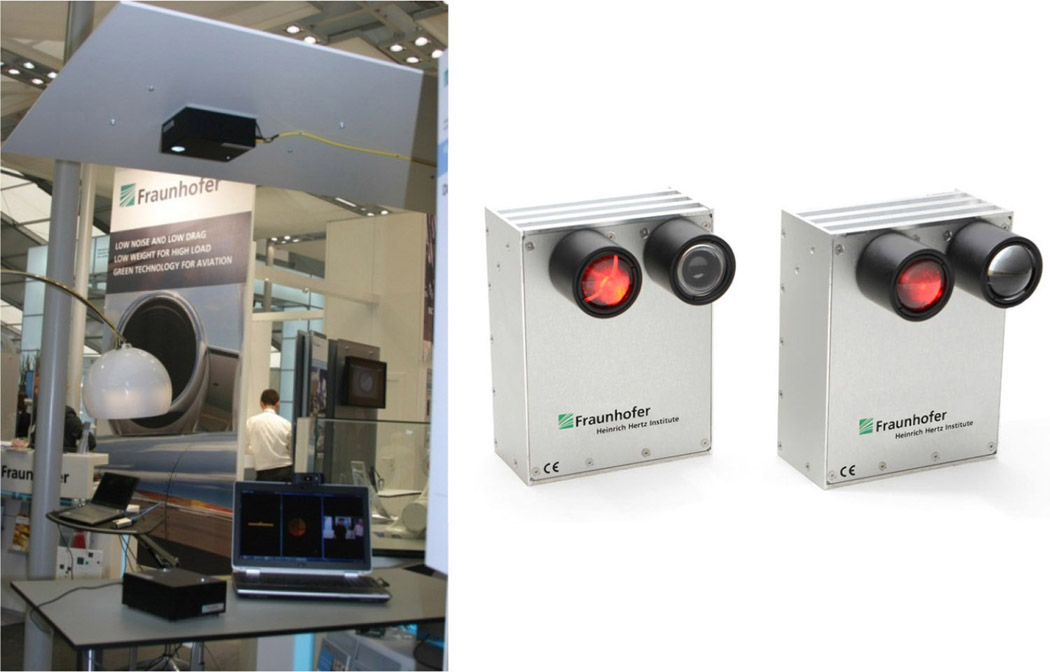 A particular advantage of our real-time VLC system is the variable throughput with controlled error rate, depending on the quality of the optical communication channel. The most important parameter is the light intensity at the receiver, leading to a nearly proportional data rate adaptation (see Figure 4). The observed dependence is similar with all kinds of illumination LEDs and applies to IR-LEDs as well. 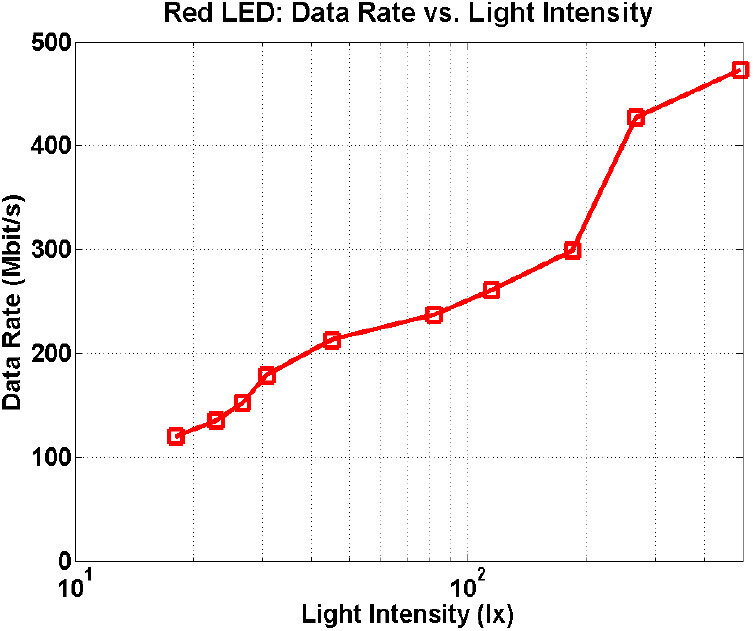 Figure 4. Measured maximum achieved data rates with the real-time rate-adaptive VLC system depending on the light intensity measured using a standard photometer at the receiver.

At a typical working distance of 2m between the ceiling and the tabletop height, and in a circle of roughly 60cm in diameter, the system enables a data rate of 200Mb/s per user. The proper choice of beam-shaping optics decides the VLC system configuration (see Figure 5). A ‘wide beam,’ 1 inch aperture lens at the transmitter represents the typical LOS illumination scenario. However, achievable maximum data rates rapidly decay with increasing link distance. With a ‘narrow beam’ 2 inch aperture lens the link can stretch up to 20m, and data rates above 100Mb/s can be reached (see Figure 5). 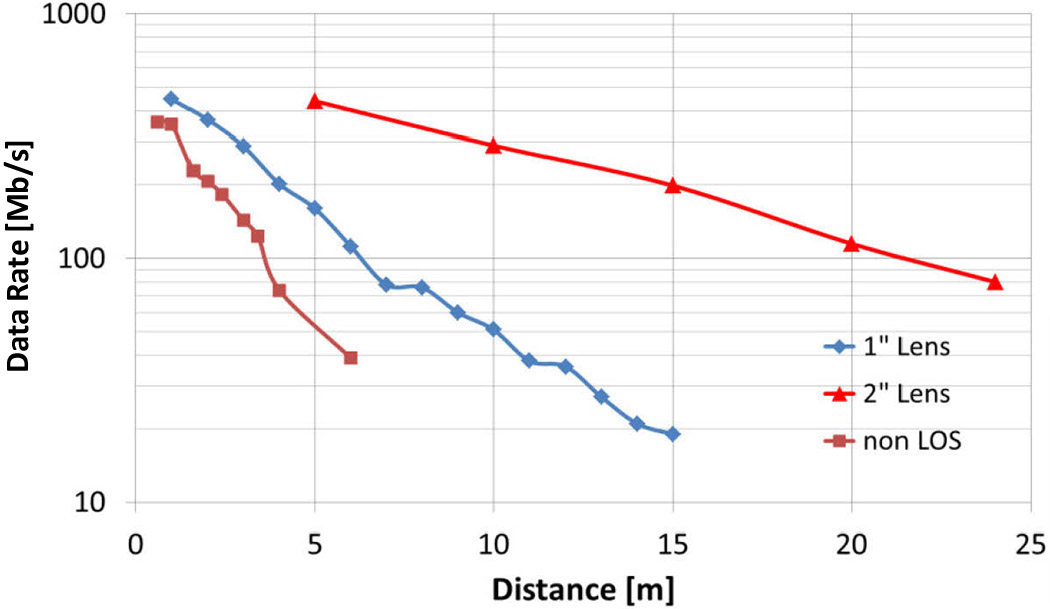 Another important result is shown in Figure 5: high-speed non-LOS data transmission in a diffused-light configuration. In this particular case, light was reflected by the white-painted ceiling. More than 100Mb/s is possible at a link range of up to 3m, despite losses and diffusion through reflection. In this way, we were able to demonstrate that a robust VLC connection is feasible under different light scenarios.

Our experiments and measurements using a real-time adaptive bidirectional VLC system fulfill important intermediate steps to turn the optical Wi-Fi vision into reality. Rate-adaptive systems based on OFDM modulation, as also used in radio and wired transmission, can be implemented with off-the-shelf components. We have shown that such systems are an excellent solution for robust optical wireless-link systems with peak data rates of 500Mb/s under various lighting conditions. Our next steps will integrate VLC technology into real-life room lighting, and will implement extensions such as multipoint-to-multipoint functionality.

Klaus-Dieter Langer is head of the Metro, Access, and In-House Systems research group. In the field of optical wireless communications, his team focuses on turning VLC indoor solutions into practice.