Transparent electrodes are an essential element in numerous electronic devices, including displays, solar cells, LEDs, and touch panels for smartphones and tablets. Indium tin oxide (ITO) is currently the most dominant material for this purpose due to its good electrical and optical performance, and moisture resistance. However, indium is becoming a scarce and expensive resource and requires a costly vacuum deposition process. In addition, its mechanical properties are weak, which severely restricts its application in flexible electronics. These issues have stimulated numerous developments with the aim of discovering new transparent electrode materials. Graphene has recently attracted considerable attention as an alternative to ITO due to its good electrical conductivity, optical transparency, and high mechanical strength.1, 2 However, for adoption in practical electronic devices, the electrical conductivity of graphene must be made comparable to that of ITO.3, 4 Although a chemical doping method has been developed, the initially high conductivity tends to degrade due to the adsorption of moisture and other chemical molecules under environmental conditions.

As an alternative approach to overcoming these limitations, we have developed a nonvolatile doping method using a piezoelectric material as substrate5 that could pave the way toward the application of graphene in high-performance flexible and transparent devices. Our electrostatic doping method employs the ferroelectric polarization of a piezoelectric material, which can effectively enhance the conductivity of graphene while maintaining good mechanical and optical properties, without degradation. After a poling process in which the material is subjected to large voltages (50–150V), the carbon-fluorine dipoles of the ferroelectric poly(vinylidene fluoride-co-trifluoroethylene)—P(VDF-TrFE)—polymer align along the poling direction. In other words, the net negative charge of the fluorine atoms is attracted to the positively biased graphene film. These nonvolatile ferroelectric dipoles are polarized in a direction perpendicular to the plane of the graphene film, which increases the number of positive holes in the material. This causes a downward shift of the Fermi level and thereby improves the electrical conductivity, resulting in p-doped graphene.

To demonstrate this technique, we have developed an acoustic actuator and a highly efficient nanogenerator using a multilayer film of graphene/P(VDF-TrFE)/graphene (GPG). We were able to fabricate a stand-alone P(VDF-TrFE)/graphene structure at a low processing temperature without an additional supporting substrate. The resulting GPG-multilayer-based actuators and nanogenerators exhibit good device functionality as well as great mechanical and optical properties.

Figure 1 shows the optical image of a GPG multilayer film, which is composed of a central P(VDF-TrFE) film and two graphene layers working as the top and bottom electrodes. The device is interconnected with a sound source to measure acoustic actuation, a red LED to measure its performance as a nanogenerator, and an amplifier. To characterize the performance of our GPG-based actuator, which produces mechanical vibrations in response to an amplified electrical signal, we drove the device with an amplified electrical signal within a broad frequency range using white noise. Figure 2(a) shows the frequency response of our fabricated acoustic device between 1 and 3000Hz. The GPG-based acoustic device is shown to operate well within the broad frequency range. The use of a graphene electrode in this device fulfills the requirement for mechanical endurance and optical transmittance, making it superior to other acoustic devices composed of conventional electrode materials such as ITO, conductive polymers, and carbon nanotubes. 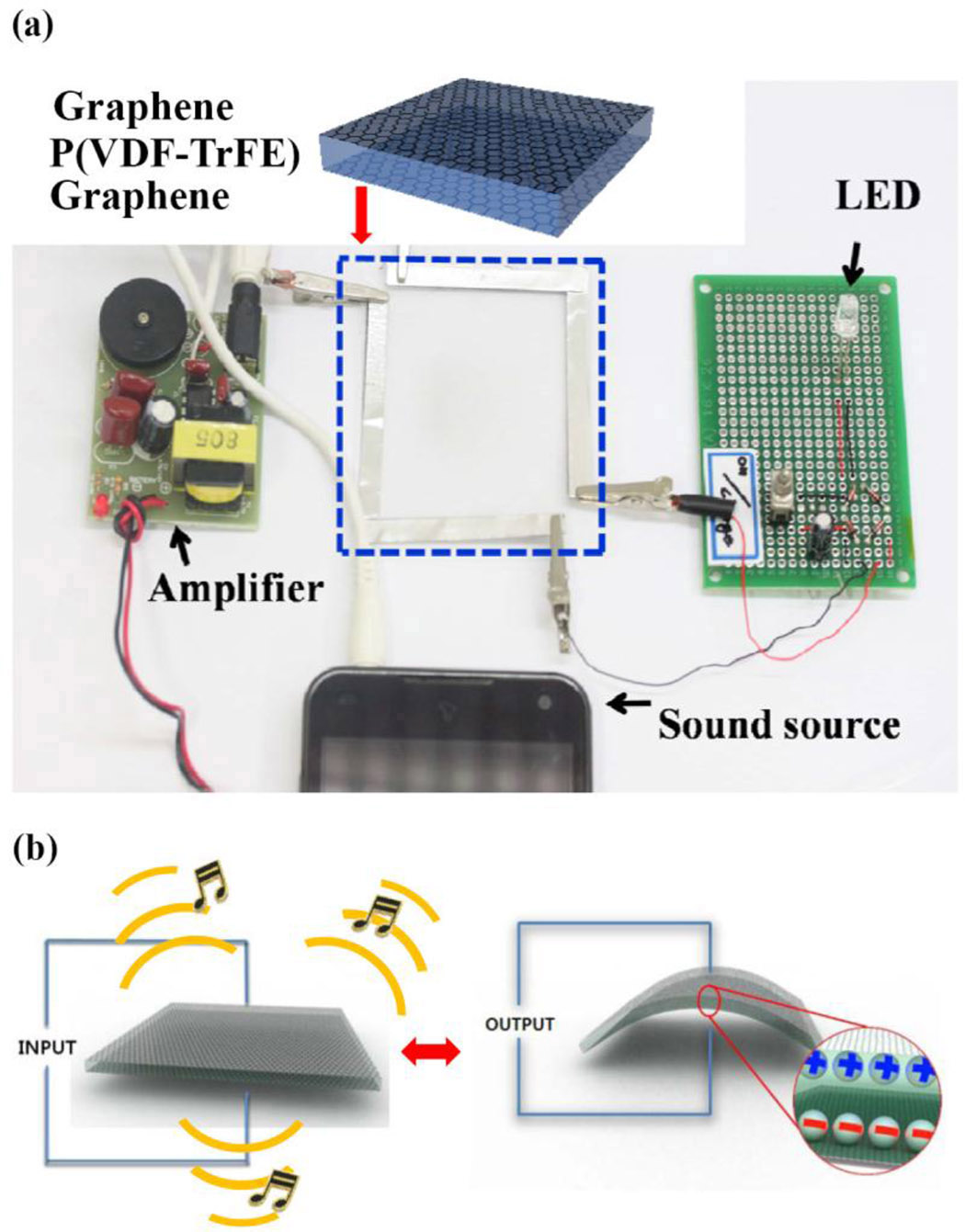 Figure 1. (a) Image of a graphene/poly(vinylidene fluoride-co-trifluoroethylene)/graphene (GPG) device. The device is interconnected with a sound source to measure acoustic actuation, a red LED to measure its performance as a nanogenerator, and an amplifier. Inset shows the structure of GPG multilayer film. Two graphene layers work as top and bottom electrodes for the central poly(vinylidene fluoride-co-trifluoroethylene)—P(VDF-TrFE)—layer. (b) Schematic depiction of the dual functionality of the device as an acoustic actuator and a nanogenerator. 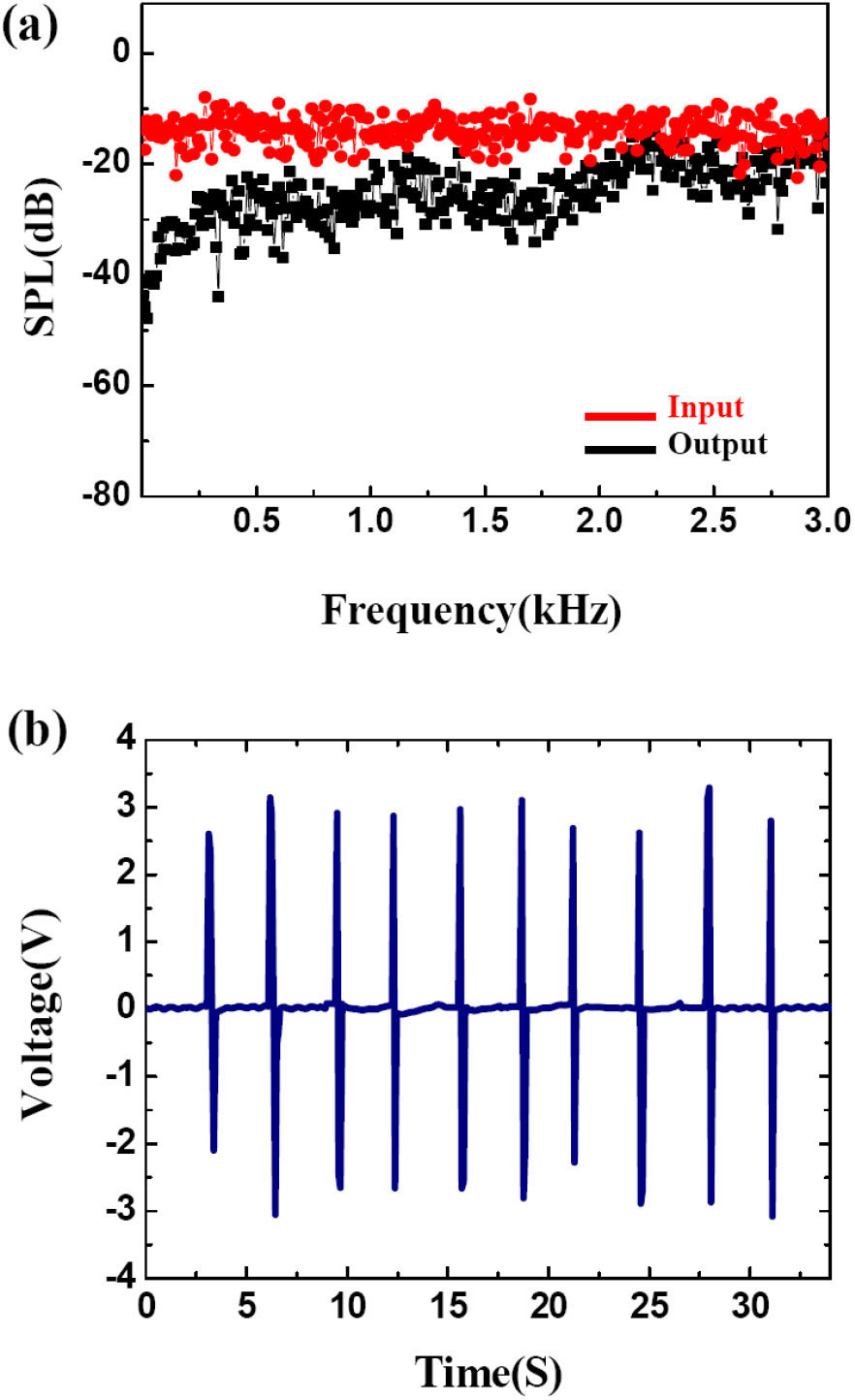 Figure 2. (a) Frequency response of GPG-based acoustic device: variation of sound pressure level (SPL) as a function of frequency within a broad region (1∼3000Hz). (b) Output voltage of the GPG-based nanogenerator as a function of time.

To characterize the performance of the GPG-based nanogenerator, we measured the output voltage and current density with respect to time. External strain was repeatedly applied to the GPG multilayer film for the generation of current-voltage. Figure 2(b) shows the variation of output voltage as a function of time. The GPG-based nanogenerator achieved an average output voltage of ∼2.5V, with a maximum value of ∼3V. The average current density was found to be over ∼0.2μAcm−2, while the maximum value was estimated to be ∼0.37μAcm−2. High electrical conductivity of the top and bottom electrodes is important for good nanogenerator performance. We believe that the nonvolatile doping of ferroelectric P(VDF-TrFE) polymer in graphene significantly increases the electrical conductivity and lowers the barrier for charge collection at the interface between P(VDF-TrFE) and the graphene electrodes, resulting in excellent performance. Another important advantage of our nanogenerator is its easy fabrication. Previously reported nanogenerators have necessitated several complicated fabrication processes, while ours requires only graphene transfer and solution-based P(VDF-TrFE), without any high-temperature processing or complex steps.6

In addition to its good electrical properties, the GPG device possesses excellent mechanical properties that can satisfy the increasing demand for rollable devices in next-generation flexible electronics. To confirm the rollability of our GPG structure, the device was rolled and released for up to 100 cycles. The relative change to the resistance of the film was found to be within a range of 0.2, indicating that GPG-based structures can be used as rollable, large-scale electronic devices.

In summary, we have demonstrated a dual-function device using a GPG multilayer film. The fluoropolymer P(VDF-TrFE) effectively increases the electrical conductivity of graphene films via dipole moment interactions. Our GPG-based device includes a nanogenerator, with performance characteristics comparable to those of conventional ZnO- and PZT-based nanogenerators, and an acoustic actuator with good frequency response and high sensitivity. In the future, we plan to focus on the development of defect-free transfer methods, high-quality graphene synthesis, and a doping approach with long-term stability to enable further progress toward flexible and wearable applications.