There has been much interest in exploiting optical frequencies for future high-speed aeronautical data transmission. Conventional systems use collimated (i.e., with parallel light rays) laser beams for narrow divergence and a small footprint. However, although this is effective, such a system is not perfectly secure and data can be intercepted. Colleagues at the German Aerospace Center (DLR) Institute of Communication and Navigation and at Ludwig Maximilian University of Munich (LMU) and I have developed a system for secure optical aeronautical communication. This system is based on quantum key distribution (QKD), which is a provably secure key distribution system based solely on the laws of quantum mechanics. Prior to this work, the DLR had already conducted successful trials with its own experimental aeronautical terminals and ground stations.1–4

The applied QKD scheme combines two quantum mechanical effects. The first is the indistinguishability of a particular set of quantum states. The second is the no-cloning theorem, which forbids copying an unknown state. Application of these effects in the correct way leads to the feasibility of each interceptor between transmitter and receiver being detected.

When signal paths from sources to the transmitter antenna (and vice versa) are all optical, it is easy to integrate additional optical systems using the same free-space path. We took a QKD transmitter (‘Alice’) and receiver (‘Bob’), both developed at LMU, and installed them in our free-space experimental laser terminal 2 (FELT2) and optical ground station in Oberpfaffenhofen, respectively: see Figure 1. We then tested the system experimentally by flying the aircraft at a defined height and distance from the ground station, while optical transmitter and receiver antennas actively sought and tracked each other to set up and maintain a link. 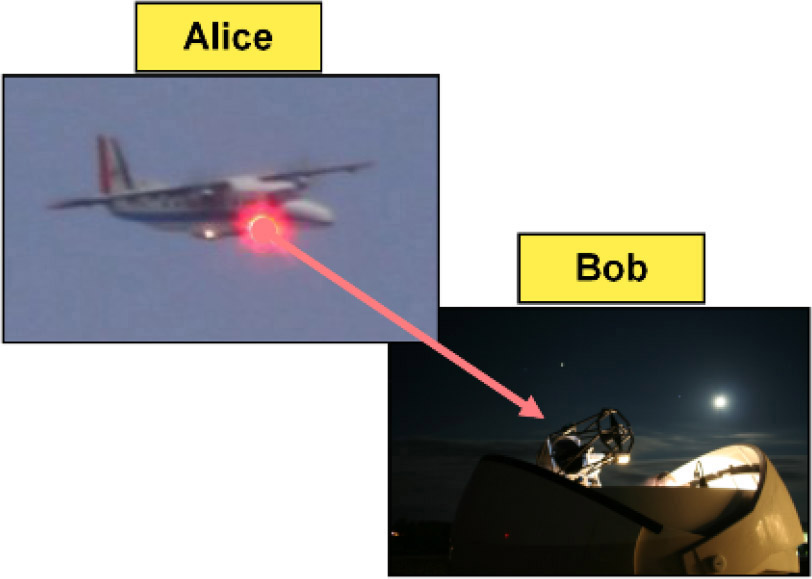 The QKD system we employed implements the so-called BB84 protocol, developed by Bennett and Brassard in 1984,5 using encoded attenuated pulses.6 The DLR communication system is used to optically track and maintain the link, which is achieved with downlink/uplink wavelengths of 1550/1590nm, respectively. The QKD system employs a wavelength of 850nm. The link was designed for 20km semicircular flight paths around the ground station, a trade-off between keeping the angular velocity low (demanding longer distances) and power coupling efficiency high (achieved with shorter distances). The flight height was between 1100 and 1300m above mean sea level.

We used a twin-engine turboprop Dornier 228 aircraft from the DLR fleet. The optical bench, hosting all optical, electrical, optoelectrical, and optomechanical parts is mounted to the seat rails inside the cabin. The laser beam is guided through the fuselage of the aircraft by a Coudé path system and pointed at the ground station with the coarse pointing system (CPA), which is protected by an optical glass dome: see Figure 2. We installed a mission radiation switch in the cockpit to enable the pilots to instantly switch off all laser systems when within a defined safety distance from the ground or another object. 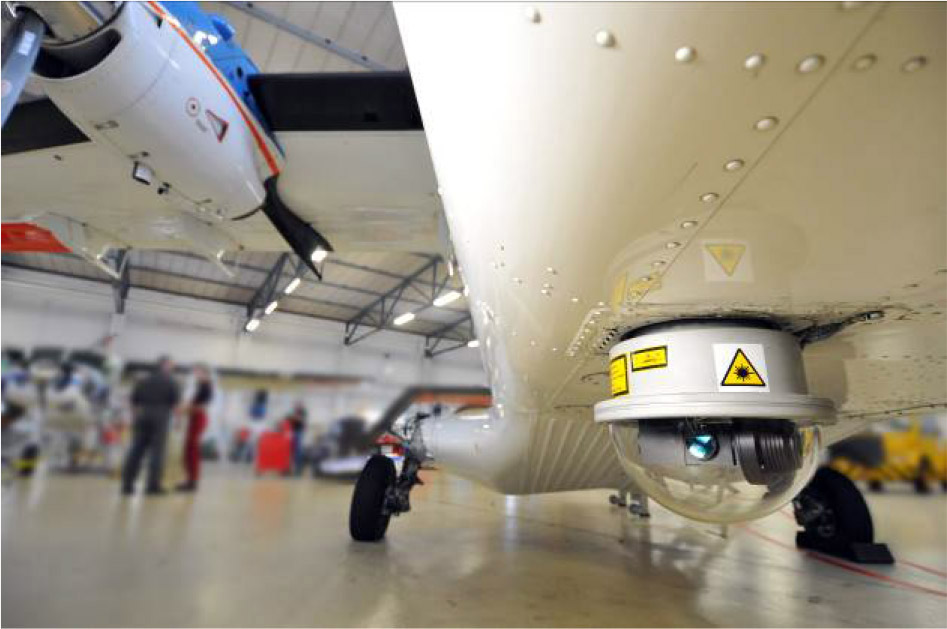 Figure 2. Image of the aircraft terminal. The outer part is the coarse pointing assembly protected by a coated glass dome.

An ultra-high-frequency link operating in parallel to the optical system transmits instantaneous aircraft position data to the ground. An initial pointing system based on the global positioning system enables the ground station's two beacon systems to illuminate the aircraft. The aircraft scans for this signal and aligns its optical path accordingly by applying a twofold optical closed-loop tracking system (see Figure 3). For coarse tracking, a wide-field-of-view (WFoV) camera supplies input to the controller driving the actuators of the CPA. The fine tracking comprises a four-quadrant diode and a voice-coil mirror system as the fine pointing assembly (FPA), controlled by a digital signal processor. The laser diode and erbium-doped fiber amplifier create the 1550nm transmission signal. The 850nm QKD signal is formed by modulated laser diodes. Both signal paths are co-aligned and combined using a dichroic mirror. 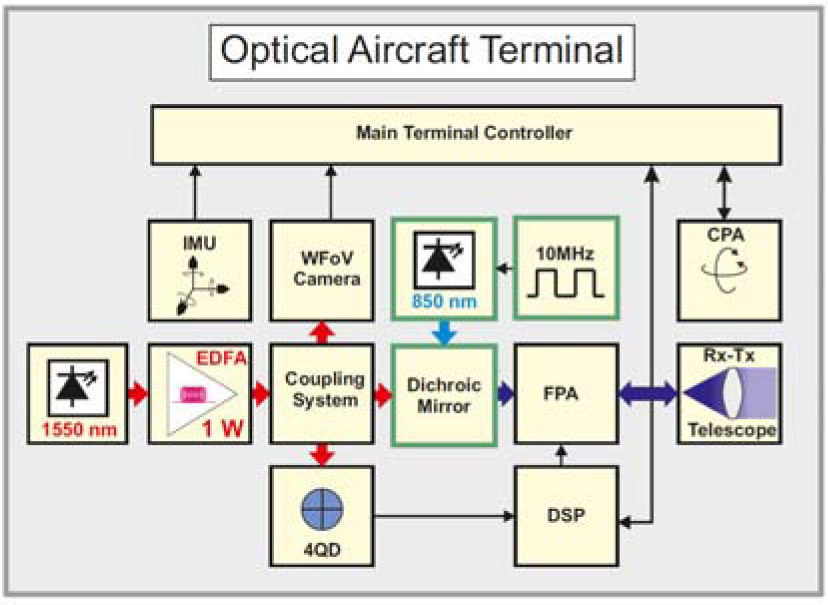 The ground segment is equipped with a 40cm Cassegrain telescope, which is held by an azimuth-elevation mount and sheltered by a 4m clamshell dome. The telescope is shrouded to reduce noise from stray light (see Figure 4). An optical bench is flanged behind the telescope, where all the devices for optical tracking, reception of a synchronization signal, and QKD are installed. Figure 5 shows the block diagram of the receiver side. We stabilized the tracking and QKD beam with an active mirror with a piezo element as the FPA. The beam was split by a dichroic mirror and guided to the respective sensor systems: a receiver front-end for sync signal reception, a narrow-field-of-view camera for optical tracking, and the QKD receiver (polarization controller and BB84 analysis). Adjacent to the telescope, two fiber lasers are installed as beacons and a WFoV camera gives input signals to the mount controller. 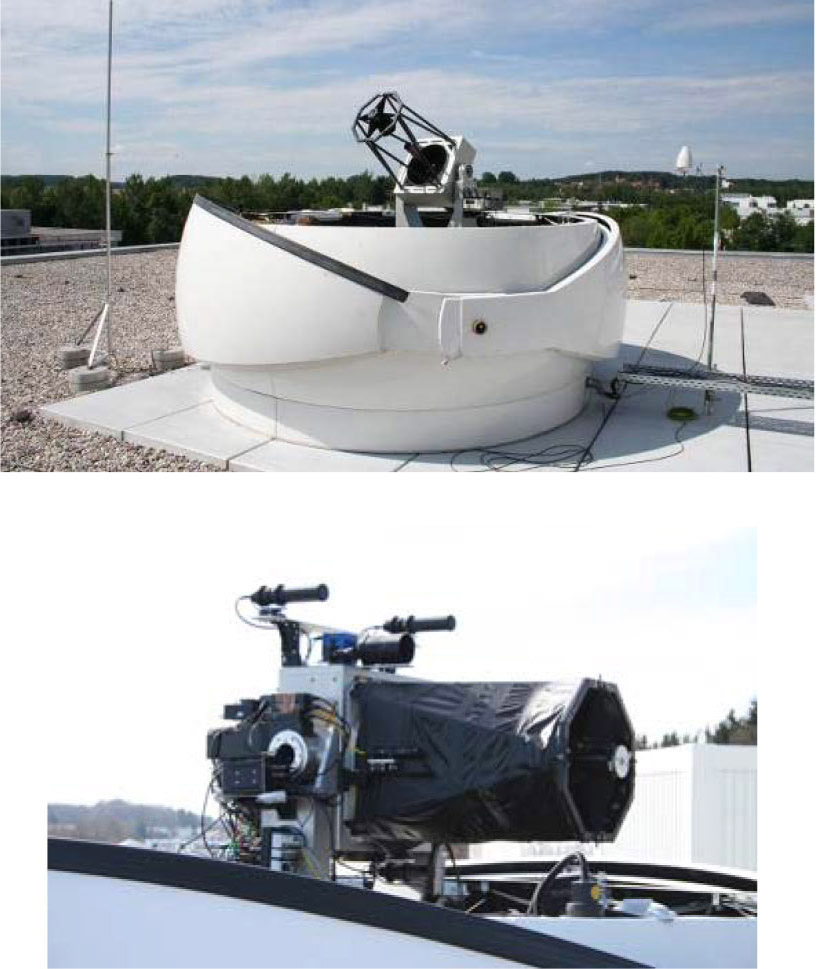 Figure 4. Images of (above) the 4m clamshell dome hosting the telescope and (below) a close-up of the telescope shrouded for stray light protection. 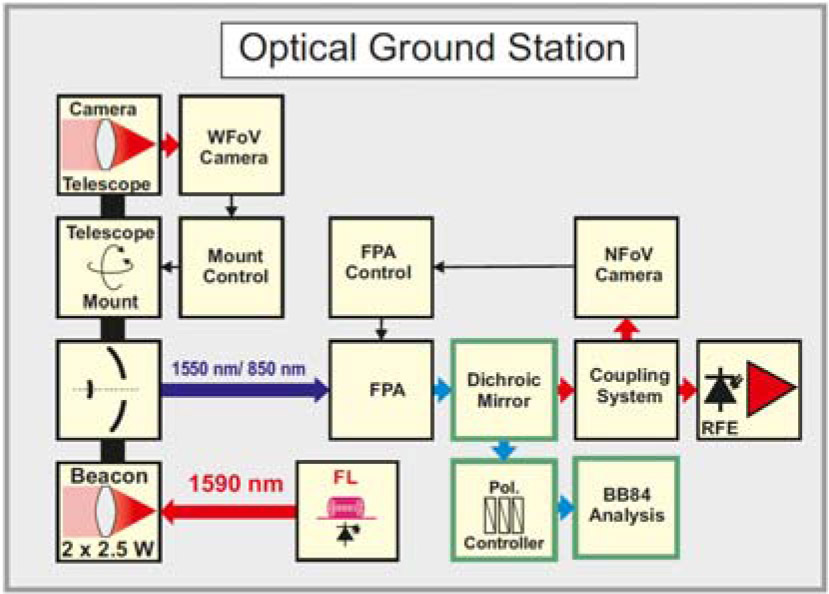 We started each daily flight trial shortly after sunset to minimize noise from background sunlight.7 The QKD transmitter worked with 0.5 photons per pulse. A sifted key rate of 145bit/s was achieved, resulting in a final key rate of 4.8bit/s with a quantum bit error rate of 4.5% after decoy analysis, showing that Alice and Bob are able to exchange a secure key.6, 8

In summary, considerable efforts are being made to develop global secure communication. We have successfully demonstrated that QKD is feasible for secure air–ground optical communications and points the way to future operational space-based QKD systems. We are now working to improve link technology and to keep coupling efficiency sufficiently high over longer distances to potentially demonstrate the feasibility of a space–ground link.

This work was conducted by the Group for Optical Communications Systems at the German Aerospace Center Institute of Communication and Navigation (Christian Fuchs, Joachim Horwath, Bernd Oeste, and the author) and the Experimental Quantum Physics Group at the Ludwig Maximilian University of Munich (Sebastian Nauerth, Markus Rau, Stefan Frick, and Harald Weinfurter).

Florian Moll received his MSc in electrical engineering from the Technical University in Munich, Germany, in 2009. Since then, he has been at the DLR, where he works on optical free-space communication.