Digital shearography—also called digital speckle pattern shearing interferometry—has been widely accepted by industry as an efficient non-destructive testing (NDT) tool for composite material. A laser illuminates the object under test, and the speckle pattern reflected from its surface is recorded. This is repeated when the test object is under stress, and the stressed and unstressed speckle patterns are compared to produce a fringe pattern.

Figure 1(a) shows the schematic of a spatial phase-shift shearography system for out-of-plane deformation gradient measurement.3 The shearing device for this setup is a modified Michelson interferometer (MI). Two lenses are added to a conventional shearographic setup: one (L1) before and the other (L2) after the MI. The combination of L1, L2, and the image lens enables an adjustable field of view. The aperture limits the cut-off frequency in the spatial frequency domain. One mirror in the MI is tilted to a certain angle, shearing the image on the image plane and, meanwhile, creating a frequency shift on the spatial frequency domain. Figure 1(b) shows the spectrum of the recorded speckle pattern image created by Fourier transform (FT). The introduced spatial frequency causes the three spectra to separate from each other. The shearogram's phase map, shown in Figure 1(c), is created by applying a windowed inverse Fourier transform (WIFT) on the round spectra that contains the phase information. 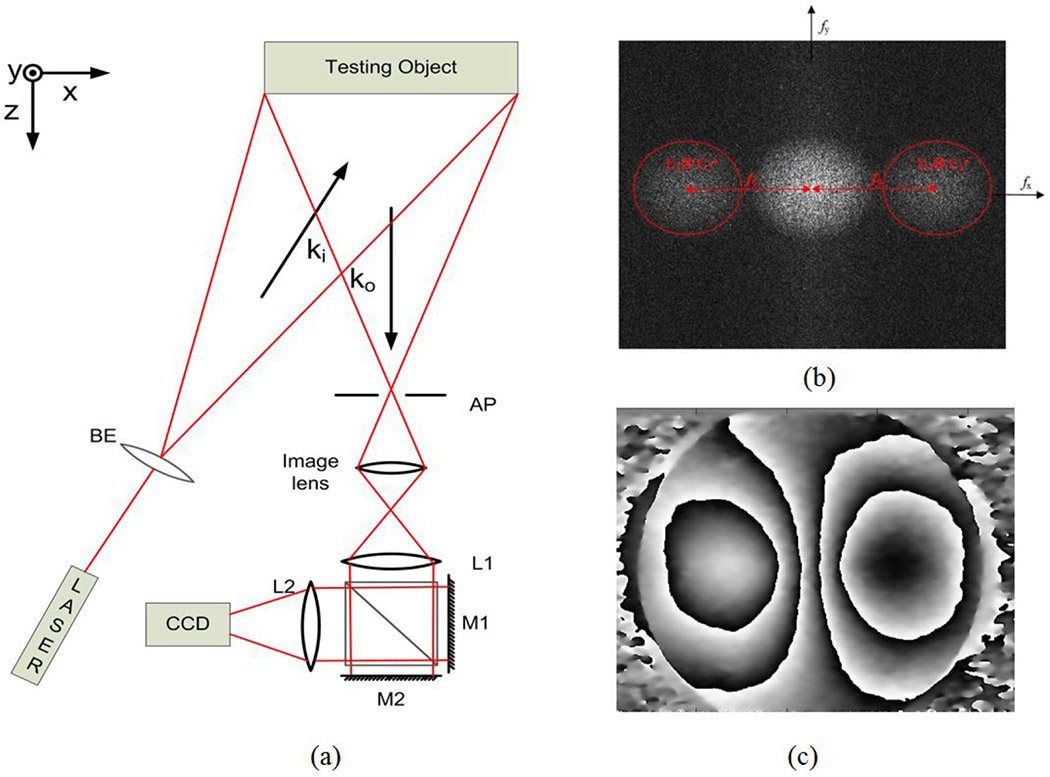 This method uses a single speckle pattern image, compared to four phase-shift images for the commonly used 4+4 temporal phase shift, to create the recorded shearogram's phase map. In this case, the acquisition rate is no longer limited by the phase-shift component or phase-shift steps. Instead, it is limited only by the CCD camera's acquisition speed, which now can reach up to ∼104Hz. Of course, the higher the camera data acquisition, the higher the laser power required.

Figure 2 shows an application of this system for NDT. A defect on a honeycomb structured plate was located using the developed shearography system. A heat gun was used to apply dynamic heat loading to the sample surface, while the system captured images at 10Hz. A series of test results indicate a delaminating defect inside the red blocked area (see Figure 2).

For certain NDT applications, in addition to the defect's location, we also care about the deformation at the defect. Traditionally, a numerical integration process has to be applied to obtain the deformation from a shearographic phase map. However, this method is greatly influenced by the starting point of integration and accumulated noise. By using a new setup and the spatial phase-shift digital shearography, we found that it is possible to measure the out-of-plane deformation and its gradient simultaneously: see Figure 3(a).4

By introducing a reference beam carried by an optical fiber, we recorded a shearogram (which contains the deformation gradient) and holograms (interference patterns between the reference beam and an image from M1 or M2), which contain the deformation itself, on a single speckle pattern image: see Figure 3(a). Depending on the selected spatial frequency shift amount and direction, it is possible to separate multiple interferograms on the spatial frequency domain: see Figure 3(b). The phase-map corresponding to the out-of-plane deformation and its derivative was then obtained by applying WIFT on the circled spectra.

Figure 3. (a) Schematic of spatial phase-shift shearography for simultaneous measurement of deformation and the gradient. (b) Spectrum of recorded speckle pattern image. (c) Calculated phase map for a centrally loaded circular plate.

In summary, we developed a novel spatial phase-shift-based digital shearography system that can extract a phase map from a single speckle pattern image. This has reduced the difficulty in detecting defects under dynamic loading. The developed spatial phase-shift shearography system, with its high-speed characteristics, simple structure, and adjustable field of view, provides a new option for NDT under dynamic loading. We are now using our setup to investigate defects in composites under impact tests. We are also further improving our setup to reduce noise by optimizing the shearing amount and filter algorithm.

Lianxiang Yang is a professor and the director of the OL. He is a Fellow of SPIE.

Xin Xie is a PhD student.

Nan Xu is a PhD student.

Xu Chen is a PhD student.